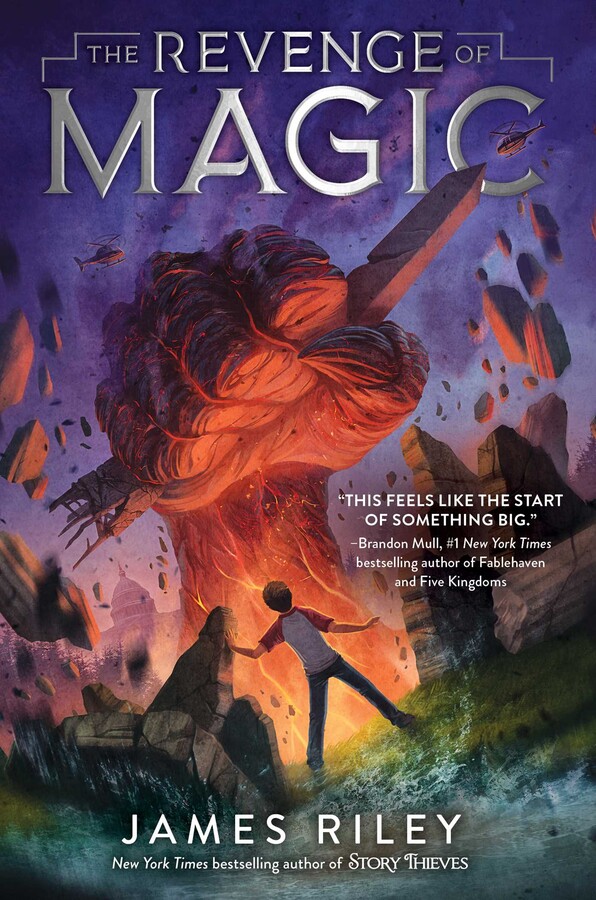 The Revenge of Magic

Thirteen years ago, books of magic were discovered in various sites around the world alongside the bones of dragons. Only those born after “Discovery Day” have the power to use the magic.

Now, on a vacation to Washington, DC, Fort Fitzgerald’s father is lost when a giant creature bursts through the earth, attacking the city. Fort is devastated, until an opportunity for justice arrives six months later, when a man named Dr. Opps invites Fort to a government-run school, the Oppenheimer School, to learn magic from those same books.

But life’s no easier at the school, where secrets abound. What does Jia, Fort’s tutor, know about the attacks? Why does Rachel, master of destructive magic, think Fort is out to destroy the school? And why is Fort seeing memories of an expelled girl every time he goes to sleep? If Fort doesn’t find out what’s hiding within the Oppenheimer School, more attacks will come, and this time, nothing will stop them!

The Revenge of Magic - ONE -
JUST MINUTES BEFORE THE ATTACK in Washington, D.C., Fort’s father was embarrassing him at the Lincoln Memorial.

“President Forsythe Fitzgerald,” his dad said, pointing at the spot each word would go above the giant seated statue of Abraham Lincoln. “I feel like we’re going to need a larger statue, though. These ceilings are high enough to fit that head of yours, but you’re definitely going to need a bigger chair.”

Fort rolled his eyes, but a grin popped out anyway. “I’m pretty sure that they don’t let twelve-year-olds run for president,” he said. “I think I have to be an adult, and that’s when you said I was going to be leading a mission to Jupiter. And curing cancer, I think? The version of me in your head really needs to make up his mind.”

“You’ll do all of that and more!” his father shouted. Other visitors to the Lincoln Memorial began to look at them, making Fort blush. “There’s no time to be lazy, not with all the amazing things you’re going to accomplish! And don’t forget that I still want a flying car, so I’ll need you to invent that too.”

Fort tried to pull his father to a less crowded area, but his dad wouldn’t move. “I will, if you just talk less loudly,” he murmured as two girls slightly older than Fort stared at them, whispering. Fantastic.

“Um, I’m pretty sure as an adult, I can talk as loudly as I want,” his father said. “But stop pushing us off topic, Fort. This is your future we’re talking about! You’re going to be a great man someday, and I for one can’t wait to take pictures in front of your statue as children gaze up at it adoringly!” He waved at the two girls. “See? We’ve already got two volunteers!”

The girls both broke into wide smiles, and Fort felt his face burn with the heat of a volcano. “I’m sorry about this,” he told them. “He thinks it’s funny to embarrass me wherever he can.”

“It’s not not funny,” one of the girls said.

“Intelligent youths around here!” his father shouted in response. “Listen to them, Fort. I hear that children are our future.”

“I’m your future,” Fort hissed at him. “Because once you’re old, I get to decide which nursing home to put you in.”

“Low blow, young man,” his dad said, then pointed at Lincoln. “Do you think our beloved sixteenth president would have spoken to his father that way? And he’s your personal hero!” He leaned closer to the girls conspiratorially. “When my boy here was in diapers, he’d stroll around in a top hat and make us all call him Fort Lincoln.”

One of the girls snorted, while the other turned away to hide her laughter. Fort wondered how easy it’d be to spontaneously combust. “He’s making that up,” he told the girls, his face getting even hotter. “And we really need to be going.”

“Oh, we have plenty of time,” his father said, taking out his phone. “Besides, I think I have pictures of that in here. Girls, do you want to see?”

“I’m just getting really tired,” Fort said, yanking his father by his arm toward the steps of the memorial. “Maybe we should head back to the hotel?”

“Nonsense!” Fort’s father shouted. “Why, we haven’t seen Einstein yet. Did you know there’s a statue of Einstein right off the National Mall, Fort? And the Gettysburg Address!” He pointed at the speech carved into the wall of the Lincoln Memorial to the left of the president. “Look at this. Two hundred and seventy-two words. Short and to the point!”

A slight tremble shook the memorial, like a heavy truck was driving by. Fort looked around nervously, but the tremor only lasted a few seconds, and no one else really seemed bothered by it.

“I think President Lincoln is waking up,” his father whispered to him with a grin. “Did you know a second man gave a two-hour speech before Lincoln at Gettysburg?” He handed Fort a brochure with the Gettysburg Address written out in multiple languages. “I don’t see that speech carved in marble, do you? If that’s not proof that shorter is better, I don’t—”

A second tremor hit, this one more violent. Several people shouted in surprise around the memorial, and Fort almost lost his balance, barely avoiding dropping to his knees on the marble. He looked up at his father in alarm. Was this an earthquake? What was happening?

His father reached over to steady Fort as the trembling stopped again. “Ladies, maybe you should go find your parents,” he said to the two girls they’d been talking to, then turned to Fort. “Are you okay, kiddo?”

“Totally fine,” Fort said, pretending his heart wasn’t still racing. “It was nothing.”

“That’s the spirit,” his father said, though he looked a bit shaken too. “But maybe we should head back to the hotel and grab some dinner. Einstein can wait. After all, time is his relative, I think. Probably a cousin.”

Fort couldn’t even bring himself to roll his eyes. Instead, he shoved the Gettysburg Address brochure in his pocket, and started to make his way through the now-unsettled crowd toward the stairs. As he reached the top of the steps, something strange caught his eye in the distance.

The Lincoln Memorial was surrounded by a circle of roadway, with the Reflecting Pool stretching out from the memorial to the Washington Monument almost a mile away.

But even from that distance, Fort could see lines of people quickly leaving the monument in every direction.

That wasn’t a great sign. But the strangest thing about it was that as far as Fort could tell from this distance, all the tourists were running from the monument in single-file lines, each person moving at the exact same speed.

“Dad, do you see that?” Fort asked, turning around just as a third tremor struck, this time much worse than the last two. The stone of the memorial leaped straight up, throwing Fort a foot in the air. He landed hard as the stone cracked beneath him in a jagged lightning shape all the way down the steps.

“Out!” Fort’s father shouted, pushing the girls toward the exit before grabbing Fort’s hand and yanking him down the stairs.

They made it down to the street circling the memorial, with horrifying noises coming from behind them. The shaking grew more intense, and now people by the Reflecting Pool were running off, again in single file, one behind the other, not even looking as they crossed the street. Fortunately the cars had all stopped and the passengers had exited their vehicles, merging smoothly into the lines of fleeing tourists.

As odd as all of that was, even stranger was that no one was screaming in fear, yelling for a friend, or even saying a word. Instead, they were all deathly quiet, moving in unison like some sort of flash mob they’d been choreographing for months. The sheer silence of those fleeing sent a chill down Fort’s spine.

A horrible new cracking noise erupted across the Reflecting Pool, like rock scraping against rock, and Fort’s father shouted something, but the grinding stone overpowered his words. Fort turned to find people near him pointing at the Washington Monument, and they were all screaming. That at least felt more normal to Fort than the eerie silence closer to the monument and Reflecting Pool.

“Look out!” someone yelled as a car came speeding around the circle, right toward a large group of tourists. One of the two girls from above had just stepped in the path of the car, but the other yanked her out of its way as the car roared past.

“Off the road!” his father shouted, and pushed both Fort and the girls onto the lawn to the side of the crumbling Lincoln Memorial. “We have to get out of here!”

“My mom’s still in there!” one of the girls shouted. “I need to go find her!”

“I’m coming—” the other girl started to say, then abruptly stopped, turned, and ran off toward the side streets.

“Megan?” the first girl called after her. “Where are you going?!”

Fort’s father looked back up into the Lincoln Memorial, then down at Fort. “Wait here,” he said. “Don’t move until I get back! I’m going to go find their mother.”

His father took the cracked steps two by two, pushing up against the crowd like he was swimming up a waterfall. Fort waited for a moment, then ran after him, followed by the remaining girl.

“Look!” someone shouted behind him.

“It can’t be real,” someone else said, filming with his phone.

Fort threw a look over his shoulder for a moment, then froze in place, halfway up the steps.

Next to the Washington Monument, something was pushing up out of the ground.

Claws that were ten feet tall.

"Fans of Harry Potter and Rick Riodan’s books will enjoy the crafted mixture of magic and military life."

"This imaginative and exciting story feels like the start of something big."

The Revenge of Magic