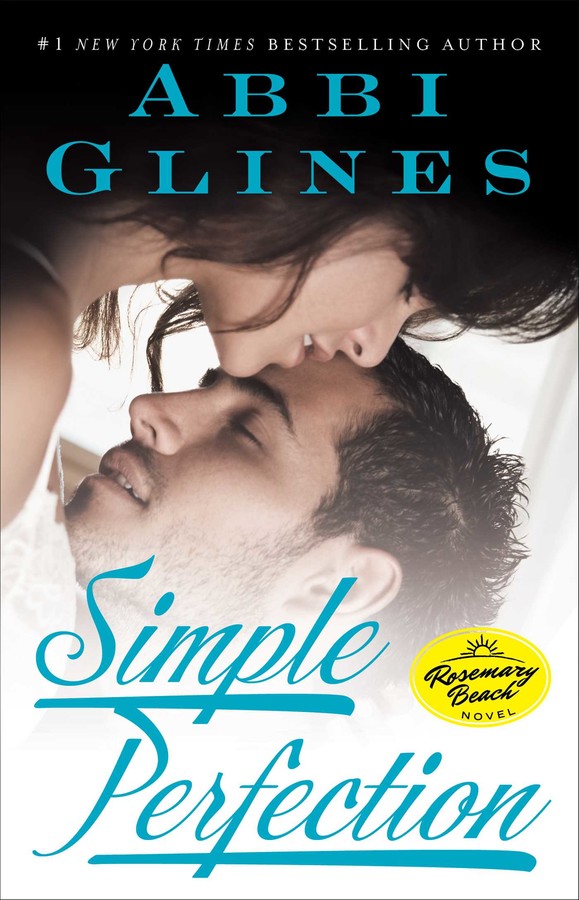 Book #6 of The Rosemary Beach Series
By Abbi Glines
LIST PRICE $16.00
PRICE MAY VARY BY RETAILER

Woods had his perfect life mapped out for him. Rise up the ranks of the family business. Marry the rich girl of his parents’ dreams. Pretend that wealth and privilege was all he’d ever wanted. Then a girl named Della breezed into town, a beautifully imperfect stranger who captured his heart and opened his eyes to a new kind of future. Woods is ready and willing to sacrifice everything for her when the sudden death of his father leaves him with his mother to care for and a business to manage.

Della is determined to be strong for Woods, even as she’s quietly falling to pieces. No matter how far from home she’s run, the ghosts of her past have never stopped haunting her. Struggling to hide her true feelings from Woods, Della fears she can’t be his rock without dragging him down into the darkness with her. But is she strong enough to let go of the last thing holding her together?

Simple Perfection Woods
My mother hadn’t spoken to me during my father’s funeral. I had gone to comfort her but she turned from me and walked away. There were a lot of things I expected in life, but that hadn’t been one of them. Ever. Nothing that I’d done had affected my mother’s life. However, she’d helped my father as he had tried to destroy mine.

Seeing him lying there cold and still in the casket hadn’t struck me the way I imagined. Everything was too fresh. I hadn’t had time to forgive him. He had hurt Della. I could never forgive that. Even with him dead and buried in the ground I couldn’t forgive what he’d done to her. She was the center of my world.

My mother had been able to see the lack of emotion in my eyes. I wasn’t one for pretending. At least not anymore. A week ago I had walked away from this life I’d been born into without one ounce of remorse. It hadn’t been hard to let it all go. My focus had been on finding Della. The woman who had walked into my life and changed everything. Della Sloane had become my addiction when I hadn’t been available. In all her twisted perfection she had made me fall helplessly in love with her. A life without her in it seemed pointless. I often wondered how people found joy in life without knowing her.

With the sudden death of my father, the life I had just washed my hands of and been so ready to walk away from was now being placed completely on my shoulders. Della had stood beside me quietly from the moment I’d stepped foot back in Rosemary Beach, Florida. Her small hand tucked into mine, she knew when I needed her without my saying anything. A squeeze from her hand would remind me that she was there beside me and I could do this.

Except at this moment she wasn’t with me. She was at my house. I hadn’t wanted to bring her here, to my mother’s house. My mother might have wanted to pretend that I didn’t exist but I now owned everything in her life, including the house she lived in. It came with the country club, and my grandfather had made sure that when my father passed away this would all become mine.

Not once had my father thought this might be something I needed to know. He held it over my head that he controlled my life. If I wanted this world, then I had to bend to his will. Yet all along it would become mine on my twenty-fifth birthday or in the event of my father’s death. Whichever came first. There was no running from this now.

I thought about knocking and changed my mind. My mother needed to stop acting like a child. I was all she had left. It was time she accepted Della in my life, because I was getting a ring on her finger as soon as I could convince her of it. I knew Della well enough to know that it wouldn’t be easy to get her to marry me. With my world completely morphing into something I hadn’t expected, I wanted the security of knowing that when I came home Della would be there.

I started to reach for the doorknob when the door swung open. My eyes lifted to see Angelina Greystone standing in the doorway of my parents’ house with an innocent smile on her face. The evil twinkle in her eye couldn’t be masked by her attempt to appear nice. I had almost married this woman so that I could get the club that was going to become mine anyway. My father had made me believe I had to marry Angelina to get the promotion and future I deserved.

What my dad hadn’t banked on was Della walking into my life and showing me there was more for me than a loveless marriage to a heartless bitch.

“We were expecting you. Your mother is in the sitting room with some chamomile tea I made for her. She needs to see you, Woods. I’m glad you took her feelings into consideration and didn’t bring that girl.”

The one thing I did know, despite what the witch had just said, was she knew Della’s name. She might have wanted to pretend like she had never heard of her and didn’t know her, but she did. She was just being spiteful. What I didn’t know was why the fuck she was at my mother’s house.

I pushed past her and walked into the house without responding to her. I knew where my mother was without her help. The sitting room was the place my mother always went to be alone. She would sit on the white velvet chaise lounge that had once been my grandmother’s and she would stare out at the water through the large picture windows that lined the room.

I ignored the click of Angelina’s heels as she followed behind me. Everything about her grated on my nerves. Her being here in the middle of a family situation on the day of my father’s funeral only added to my disgust. Why was she doing this? What did she think this would win her? I owned it all now. Me. Not my father. And certainly not my mother. I was now the Kerrington in control.

“Mother,” I said as I walked into the sitting room without knocking. She didn’t need a chance to send me away. Not that I would go without having this conversation. As wrong as she had been, I loved her. She was my mom, even though she had always stood beside my father and never once thought of me. It had always been about what they wanted for me. But it didn’t make me love her less.

She didn’t turn her attention from the gulf view outside. “Woods, I was expecting you.” Nothing more. It hurt. We had both lost a part of our lives with my father’s death. She didn’t see it that way. She never would.

I walked over to stand in her line of view. “We need to talk,” I replied simply.

I could have let her control this conversation but I wasn’t going to. It was time I set some boundaries. Especially now that I had Della with me and we were back in Rosemary.

“At least he came alone.” Angelina’s voice came from the door and I jerked my head to glare at her intrusion. She wasn’t a part of this.

“This doesn’t concern you. You may leave,” I replied in a cold tone.

“She is a part of this. She’s going to stay with me. I need someone here so I’m not alone and Angelina understands that. She’s a good girl. She would have made an excellent daughter-in-law.”

I understood my mother’s pain at losing my father was fresh—and she was in pain. But I wouldn’t let her control this. It was time I made some things very clear for both of them. “She would have been a selfish spoiled bitch of a daughter-in-law. I was lucky enough to realize it before it was too late and I ruined my life.” I heard both of their sharp intakes of breath but I wasn’t about to let them speak. “I control everything now, Mother. I will take care of you. I will make sure you want for nothing. However, I will not accept or acknowledge Angelina in my life. More importantly, I will not allow anyone to hurt Della. I will protect her from both of you. She is my perfection. She holds my heart in her hands. When she hurts it brings me to my knees. There is no way to explain to you the way I feel about her. Just understand that I will not allow anyone to hurt her again. I won’t forgive that. I lose a piece of my soul when I see her in pain.”

The tight line of my mother’s mouth was the only answer I needed. She wasn’t accepting this. Today wasn’t the day to try to convince her about my feelings for Della. She was mourning and I was still angry with the man she was mourning. “If you need anything, call me. When you’re ready to talk to me without resentment toward Della, then call me. We will talk. You’re my mother and I love you. But I won’t let you near Della, nor will I put you before her. Understand that if you make me choose, I will choose her without a second thought.”

I walked over and placed a kiss on the top of my mother’s head before walking past Angelina without a word. It was time I got back home. Della didn’t do well alone. I was always anxious when I left her.

Book #6 of The Rosemary Beach Series
By Abbi Glines
LIST PRICE $16.00
PRICE MAY VARY BY RETAILER