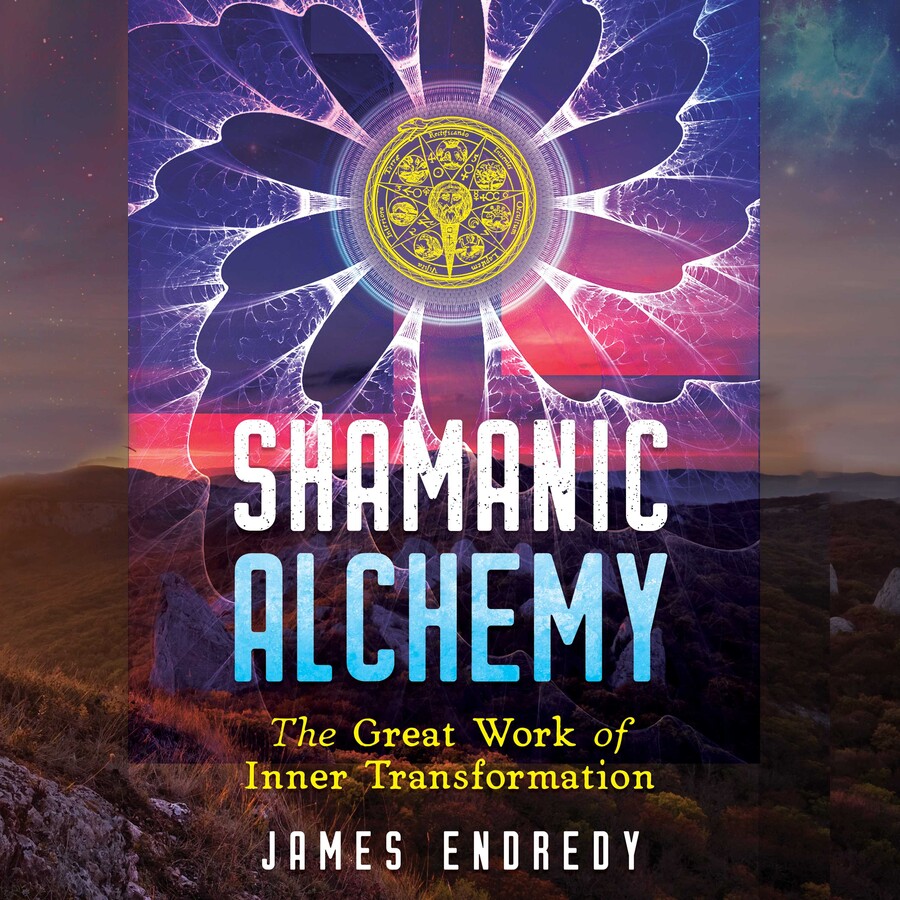 • Provides step-by-step instructions for 18 shamanic alchemy practices for inner transformation, including vibrational energy work, consciousness-altering techniques, the creation of mirrors of the mind, and sacred ceremonies tied to the four elements

• Explores the alchemical plant-medicine techniques of spagyrics, as well as recipes for basic tinctures and “plant-stones”

Offering a unique, hands-on guide to advanced self-transformation, James Endredy shows how traditional shamanic techniques offer a doorway into the sacred art of alchemy, the inner transformation of the soul.

Revealing the practical and intuitive connections between shamanism and alchemy, including not only Western alchemy but also alchemical practices from the East, Endredy recasts the 7 stages of the alchemical “Great Work” as a transformative shamanic journey and initiatic experience. He provides step-by-step instructions for 18 shamanic alchemy practices for inner transformation, including vibrational energy work, consciousness-altering techniques, the creation of mirrors of the mind, shamanic viewing, and sacred ceremonies tied to the four elements. Exploring the healing art of spagyrics, the author shows how this alchemical plant-medicine practice is receptive to the energetic work of traditional shamanic techniques. He details formulations for distilling shamanic spagyric remedies, as well as recipes for basic tinctures and “plant-stones.” He also discusses the creation of sacred space, altars, and shamanic distillation lodges.

Comparing shamanic and alchemical cosmologies, the author explains how both shamanism and alchemy employ direct experience of the numinous and invisible worlds, also known as gnosis, to impart wisdom, invoke peace of mind, and increase creativity and vitality. Showing how the practical vibrational science of alchemy and the consciousness-transforming techniques of shamanism directly enhance and expand upon each other, Endredy also reveals how they have the same ultimate goals: to allow the practitioner to transmute spiritual lead into gold and to penetrate the deep secrets of life and of nature.

The legendary alchemist Frater Basil Valentine is attested to have been a fifteenth-century Benedictine monk; however, historians tell us that Valentine’s work was more probably written by several different alchemists of the time who wished to remain anonymous. In any event, alchemic works ascribed to Valentine have been used by alchemists for centuries, and the basis for many of Valentine’s works comes directly from much older sources such as the Emerald Tablet, which could date back thousands of years.

In attempting to decipher the messages of the Emerald Tablet ancient alchemists came up with seven operations, steps, or stages to be performed on matter. In this sense matter can be conceived as physical, psychological, or spiritual in nature. These seven steps are a mainstay to alchemy even to this day and as such may be used as a guide to shamanic alchemy practices. Frater Valentine provides us with an intricate mandala that is in reality a map that leads through the seven steps. The seven steps are calcination, dissolution, separation, conjunction, fermentation, distillation, and coagulation.

The third star ray points toward the torch of Fire and includes the cipher for Iron and Mars. The third circle shows the operation of Separation in which the Black Soul Bird splits into two White birds that descend to retrieve the remains of Calcination and Dissolution. The action and symbolism of Air is found here by the blowing of the torch and also the first time we see birds actually flying. The word Terrae means “of the earth” and symbolically represents the tangible essences and energies that are separated out during this stage.

The shamanic alchemy approach to psychological separation involves becoming aware of the illusions we have about ourselves and separating the personality into its basic components. In doing so the shaman-alchemist becomes aware of the opposites within. With the practice of exploring opposites it is possible to become even more healthy, whole, and mature.

Counter-practice is the term I like to use for this type of shamanic-alchemic practice. Dealing with pure opposites is not really accurate in defining counter-practice as it is infinitely more refined. Counter-practice involves actions that move counter, or in a contrary direction, to a habitual pattern or practice. It turns our habitual way of doing things upside down and inside out so that we can see and feel from a place other than our habitual point of view (separation). In terms of shamanism and shamanic training, counter-practice is employed specifically to enlarge and expand one’s consciousness by experiencing shifts in one’s perceptual point of view. Shamans accomplish this in many ways, such as:

Exploring the consciousness of a specific animal or converting their perception to experience the energy of the wind, sun, or rain.

Engaging in isolated excursions into the wilderness to obtain vision and guidance. By completely removing themselves from their normal environment, people, and food, they open the door to perceive the mystery of the world from a fresh perspective.

Elders of shamanic tribes using counter-practice when assigning tasks and roles for people in ceremonies.

One example of counter-practice occurred on one of my early pilgrimages to Wirikuta (the peyote desert). Two days before leaving from the village I noticed my friend Rosendo looked all downtrodden. He told me he wasn’t happy that the Elders chose him to represent Tatei Matinieri in the pilgrimage. I thought Wow, being Tatei Matinieri is a real honor--it’s the sacred spring in Wirikuta where the shaman sings blessings and prayers for the children back home and blesses all the pilgrims with the sacred water. It is also the place where they collect the yellow uxa root the women crush for face paint for the sacred designs painted on the pilgrims faces. So I asked him what was wrong.

He told me that first all he had never been to Wirikuta and so had not been to the sacred spring. Second everyone knew he didn’t like water; when he went on pilgrimage to Tatei Haramara (sacred site at the Pacific Ocean), he was the only one that didn’t go in the water. (It’s not necessary to go in the water; their ceremony is on the beach.) And third, being Tatei Matinieri was for women; he had never heard of a man doing it.

Just then Rosendo’s father walked by and nonchalantly said to Rosendo, “You ready?” The tone of his voice and the fact he kept walking did not elicit a response from Rosendo, but he did become more agitated and said he was going to do something about this situation and go talk to the Kawitero (Elder).

The next morning Rosendo came to me. He was very excited and told me how the old Kawitero told him all about the pilgrimage and especially his role as the sacred spring. He also said that he and the Kawitero ate some peyote and the shaman took him on a dream ride to Tatei Matinieri so now he knew exactly what it looks and feels like. He was extremely elated and animated. Wow, what a change!

James Endredy is a practicing shaman of Hungarian descent who learned his craft from formal initiations with the peyote shamans of Mexico and through 30 years of living with and learning from shamanic cultures in North and South America. He is actively involved in preserving historic alchemy texts as well as the world’s indigenous cultures and sacred sites. The award-winning author of several books, including Advanced Shamanism, Teachings of the Peyote Shamans, Ecoshamanism, and Earthwalks for Body and Spirit, he lives in California.

“With competence and authority James Endredy has written a powerful book with clear and precise instructions on advanced shamanic techniques learned directly from indigenous shamans. [Advanced Shamanism] is a wonderful contribution to shamanic literature. By bridging quantum physics with ancient shamanic practices, he immeasurably expands our access to the strange and wonderful world of the age-old shamanic path. This is the real deal.”

“James Endredy continues to tap into the primordial ways of healing. Advanced Autogenic Training and Primal Awareness is a marriage of his power of storytelling and his vast personal history with the practice. It is not often in this lifetime that one meets a true spiritual master, but this generation has James, and this book is a must-have for those desirous of deepening their connection with the I AM.”

“For indigenous people everywhere, walking is spiritual as well as physical--an ecstatic journey into our oneness with nature. In these magical pages, Jim Endredy opens the door to that journey. Earthwalks for Body and Spirit is a beautiful invitation for you to shapeshift your life.”

– John Perkins, author of Shapeshifting and Spirit of the Shuar

“I recommend [Teachings of the Peyote Shamans] as a smooth ride into the world of the indigenous Huichol people of Mexico. The author gives rare insight into the everyday life of these people, their art, and religion.”

"Shamanic Alchemy is a wonderfully detailed and informative book in which James Endredy brings the practical and intuitive connections between shamanism and alchemy to life. The reader is offered a unique insight into how traditional shamanic techniques offer access into the scared art of alchemy as the author shares his insights into shamanic and alchemical cosmologies and initiations."