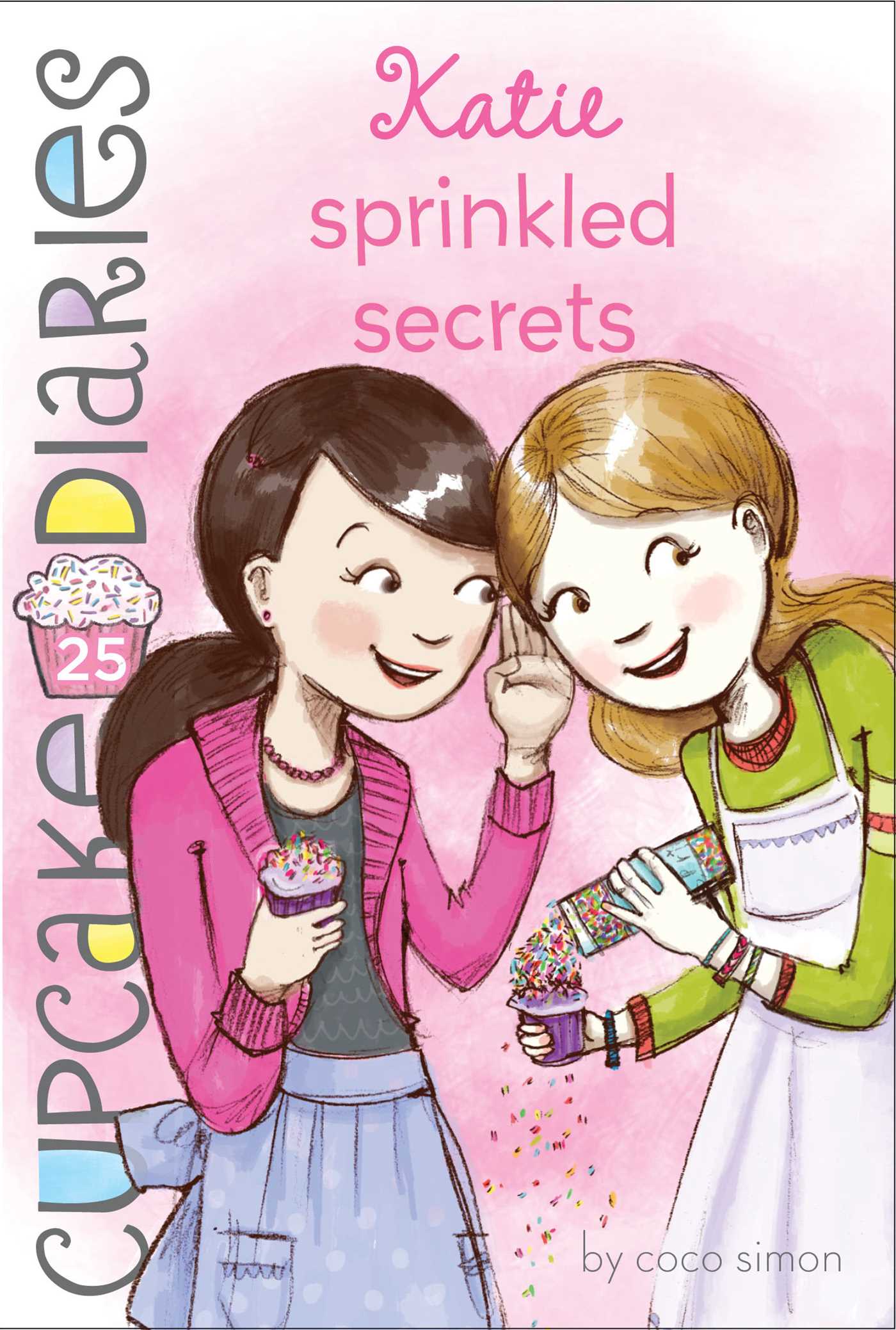 Katie has a tough time keeping one secret…what happens when she has to keep four? All of the cupcake girls have secrets and are ready to burst!

Katie loves knowing a secret; it's just tough for her to keep them! And in this story all her friends have told her a secret! From new crushes to someone cheating on a math test, Katie doesn’t know what to do with all of this juicy information!

Can the Cupcake Club survive with everyone keeping secrets from one another? The girls soon realize they need to confide in each other—after all what are best friends for if not for keeping your secrets?

CHAPTER 1 Good Secrets, Bad Secrets
Sometimes I can’t believe how much I’ve changed since I’ve started middle school. On the first day of school, my best friend, Callie Wilson, dumped me because she didn’t think I was as popular as her new friends. But now I have three best friends: Mia Vélaz-Cruz, Alexis Becker, and Emma Taylor, and they are really great.

I used to think boys were just, well, boys. But now I have a sort-of boyfriend named George Martinez.

I used to think it would be really bad if my mom ever got a boyfriend. But now she’s dating Jeff—who I have to call Mr. Green sometimes, because he’s a teacher at my school—and it’s not bad at all.

I used to bake in my spare time. But now I bake almost all the time, because my friends and I have a real business selling cupcakes—the Cupcake Club.

I also used to be really against the idea of joining a competitive sports team at school. I would just get too nervous about the whole thing, and then I would make all these goofy mistakes. But now, well, things are different.

“Katie, I don’t get it,” Emma said during lunch in the cafeteria one day. “Why did you join the track team? I mean, it’s great, but I thought you just liked to run for fun.”

“Well, I was really anxious about it,” I admitted. “But Jeff—I mean, Mr. Green—is friends with Coach Goodman, the track coach. And the track team is the one team you don’t try out for—anyone can join. So even if I don’t run in any races, it might be fun to run with a group of people.”

“And Coach Goodman is so nice!” Mia added. “I have her for Technology. She makes everything seem so easy.”

I nodded. “Yeah, she’s supernice. She took me aside in the hall and said she heard I was a good runner. She said I could come to a practice and check it out. She doesn’t put a lot of pressure on the team, but everybody tries really hard, anyway, you know? So it seemed good, and I just thought I should go for it.”

“That’s really great,” said Alexis. Her curly red hair bounced on her shoulders as she nodded. “You know, any activities you do will look great on your college application. It’s never too early to start.” We all rolled our eyes but laughed because Alexis is always thinking about things like that.

“E-mail me your practice and meet schedule when you get it,” Alexis said. “It’s getting harder and harder to schedule our Cupcake Club meetings these days.”

Each of us in the Cupcake Club brings something different to the team. Alexis is a business whiz and keeps us really organized. Mia is a great artist, and she comes up with amazing cupcake decorations. Emma and I are really good at coming up with new recipes and flavors. (I’m not sure about Emma, but I know that I dream about cupcakes sometimes—honestly. Once I dreamed that these mini marshmallows were dancing around a swimming pool filled with caramel, and then they all jumped in. That’s how my famous marshmallow-caramel cupcake was born.)

Alexis scrolled down her phone screen. “Yes. Seven o’clock at my house.”

“Can we do it at eight?” Emma asked. “I have a modeling job after school, and it might go a little late.”

“Anything exciting?” Mia asked, her dark eyes shining. Mia’s mom is a fashion stylist, and Mia wants to design clothes someday. Which is fine with me because she wants to go to design school in Manhattan, and I want to go to cooking school in Manhattan. This way we won’t have to say good-bye forever after high school—not that we would, anyway, but I’m glad we’re planning to stay close.

Emma frowned. “It’s a summer preview catalog, so it’s lots of shorts and tank tops,” she said. “Which means I have to shave my legs.”

Emma was wearing a skirt, and I ducked and looked at her legs. “Seriously? Your hair is so blond you can’t even see it.”

“The camera sees everything,” Emma said in a serious tone. “Plus, they told me to.” She sighed.

“Dylan says once you start shaving your leg hair, it grows in even more,” Alexis said. (Dylan is her older sister, who’s in high school.) “And I think she’s right. I woke up the other morning, and I swear my leg hairs grew an inch.”

The conversation was making me kind of uncomfortable. I had never even thought about shaving my legs. Honestly, I never even noticed that everyone else started doing it.

Mia is my closest friend. If we were alone, maybe I would have told the truth right then. Instead, I lied.

“Yeah, it’s the worst,” I agreed, even though I had no idea what it was like. Then I quickly changed the subject. “So, yeah, eight o’clock on Friday is fine with me for a meeting.”

“Then eight o’clock it is,” Alexis said, typing into her phone. She put it down and opened up her lunch container. “Mmm, Asian chicken salad. Gotta make a note to thank Dad.”

“Yeah, he’s getting pretty creative with your lunches,” I said.

“Once I pointed out that packing lunch was cheaper than buying lunch in the cafeteria every day, he gave in,” she said. “I give him a shopping list to make things easier.”

Emma poked at the spaghetti on her plate. “Well, I kind of like the cafeteria food. But now I have nobody to wait with on the lunch line.”

“Sorry, Emma. I didn’t think of that,” Alexis said.

“I’d eat the school lunch, but I think packing lunch for me is one of Mom’s hobbies,” I said. I opened up my new bento box, which is a kind of Japanese lunch box. There are little compartments and containers, so you can have lots of different tastes in one meal.

“See? Carrot sticks and ranch dip, and she made me homemade cucumber sushi, and a hard-boiled egg, and grapes with a sweet dipping sauce.”

“That is impressive,” Mia said. “I’ve got a turkey and Swiss on a spinach wrap. Not superexciting, but it’s my favorite, so . . .” She shrugged and took a bite. Then her cell phone made a chirping noise.

Mia picked it up and looked at the screen. Her eyes went wide.

“No way!” she said, shaking her head.

“Olivia Allen,” she replied. “She says that Julie Fletcher was seen at the mall with Todd Weiser.”

“So?” Mia said loudly. “Everybody knows that Todd is seeing Bella Kovacs!”

“Why would Olivia be texting that?” asked Emma. “Isn’t Bella supposed to be her friend?”

Olivia and Bella are in a club together—the Best Friends Club. Callie (my former best friend) and Maggie Rodriguez are in it too. You have to be really popular to be in the BFC. I think you have to be a little mean, too, but some of them are nicer than others. Mia could be in the club if she wanted to, but she’d rather stick with us. (Which is another reason I love her.)

“Well, Olivia is not exactly what you’d call great friend material,” Mia pointed out, and we all nodded. When she first came to Park Street Middle School, Mia had been really nice to her. But Olivia didn’t appreciate it one bit, and she ended up doing some really mean things to Mia. So Mia ended their friendship. Olivia has been a little nicer lately. But she’ll never be one of the Cupcakers.

“You can say that again,” I said. “She’s not great at keeping a secret, either.”

Mia laughed. “You’re right, Katie, but since when are you good at keeping secrets?”

I was shocked. “What do you mean?”

“I know what she means,” said Alexis, looking at me. “Like that time Emma, you, and I chipped in to get Mia that cool professional sketching kit for her birthday, and we wanted to keep it a surprise, but you blurted it out a week before the party.”

I blushed. That had definitely happened. “Okay, well, that was because I was superexcited and couldn’t control myself,” I admitted. “But I didn’t do it to hurt anybody’s feelings. Olivia might have seen Julie and Todd at the mall, but she didn’t have to say anything. Or she could have told Bella privately, instead of texting everybody.”

Emma nodded. “Katie’s right. Sometimes when you tell a secret, it can really hurt somebody.”

“But sometimes you have to tell a secret, if it means it will keep somebody from being hurt,” Mia pointed out.

“Well, I hate secrets,” Alexis announced. “I mean, birthday surprises and stuff are okay, I guess. But I think if everybody were honest with one another all the time, it would save a lot of hurt feelings and trouble, you know?”

I looked over at the BFC table. Olivia and Bella were sitting next to each other, and Bella was laughing about something. She had no idea that Olivia was spreading rumors that might hurt her.

Mia saw me looking at Bella.

“Yeah, I guess that text was a pretty bad one,” she said. “Gossip can be really fun, but I guess it mostly stinks, you know?”

“Definitely,” I agreed. “You know, I’m really glad we all don’t keep secrets from one another.” Then I briefly thought of the lie I had told about shaving my legs just minutes before—but that didn’t count, did it? It was just a little white lie.

“Me too,” my friends agreed, pretty much at the same time.

We finished our lunch and didn’t talk about secrets anymore. That’s because none of us knew it yet, but secrets were about to nearly tear apart the Cupcake Club.