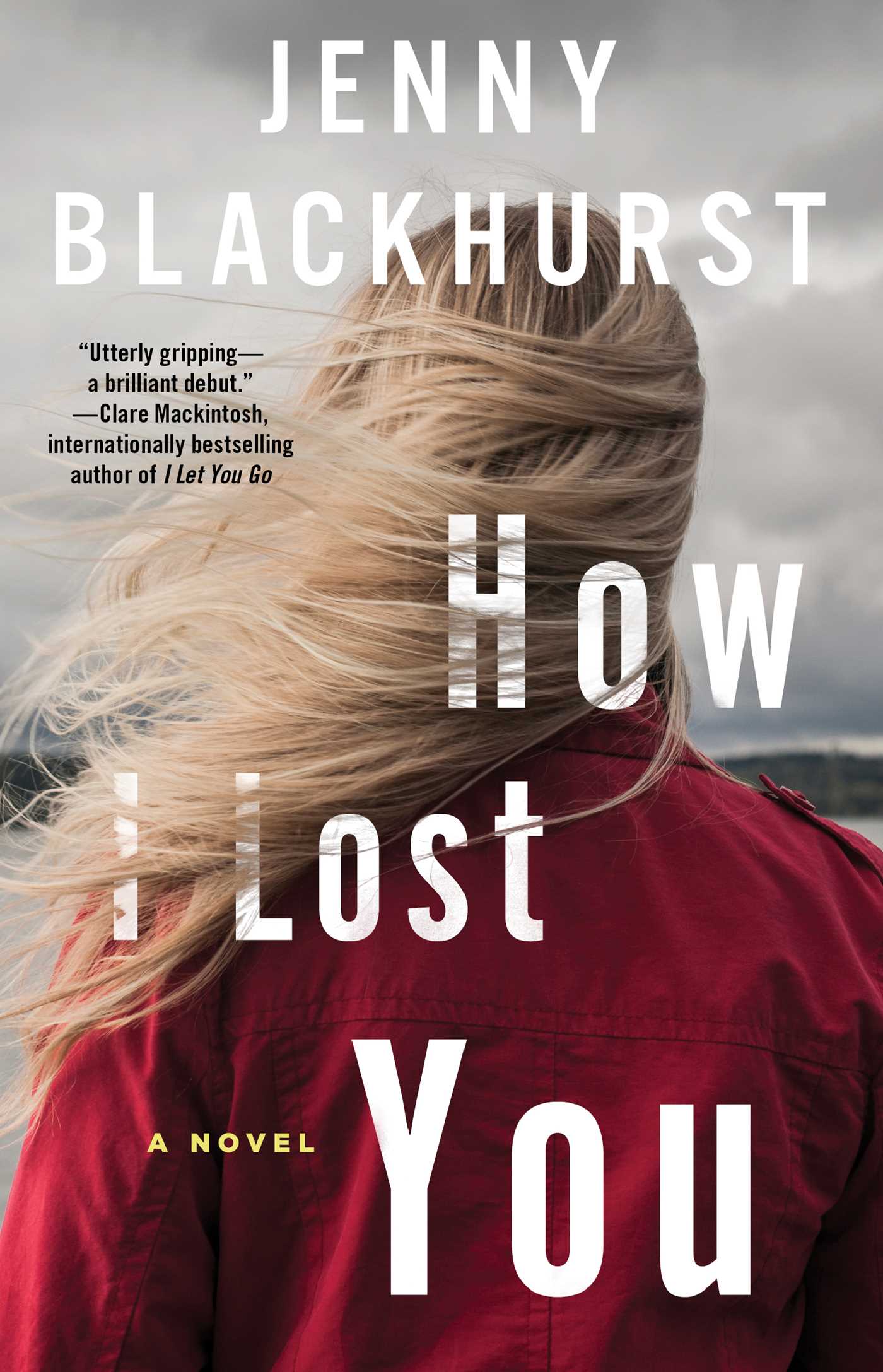 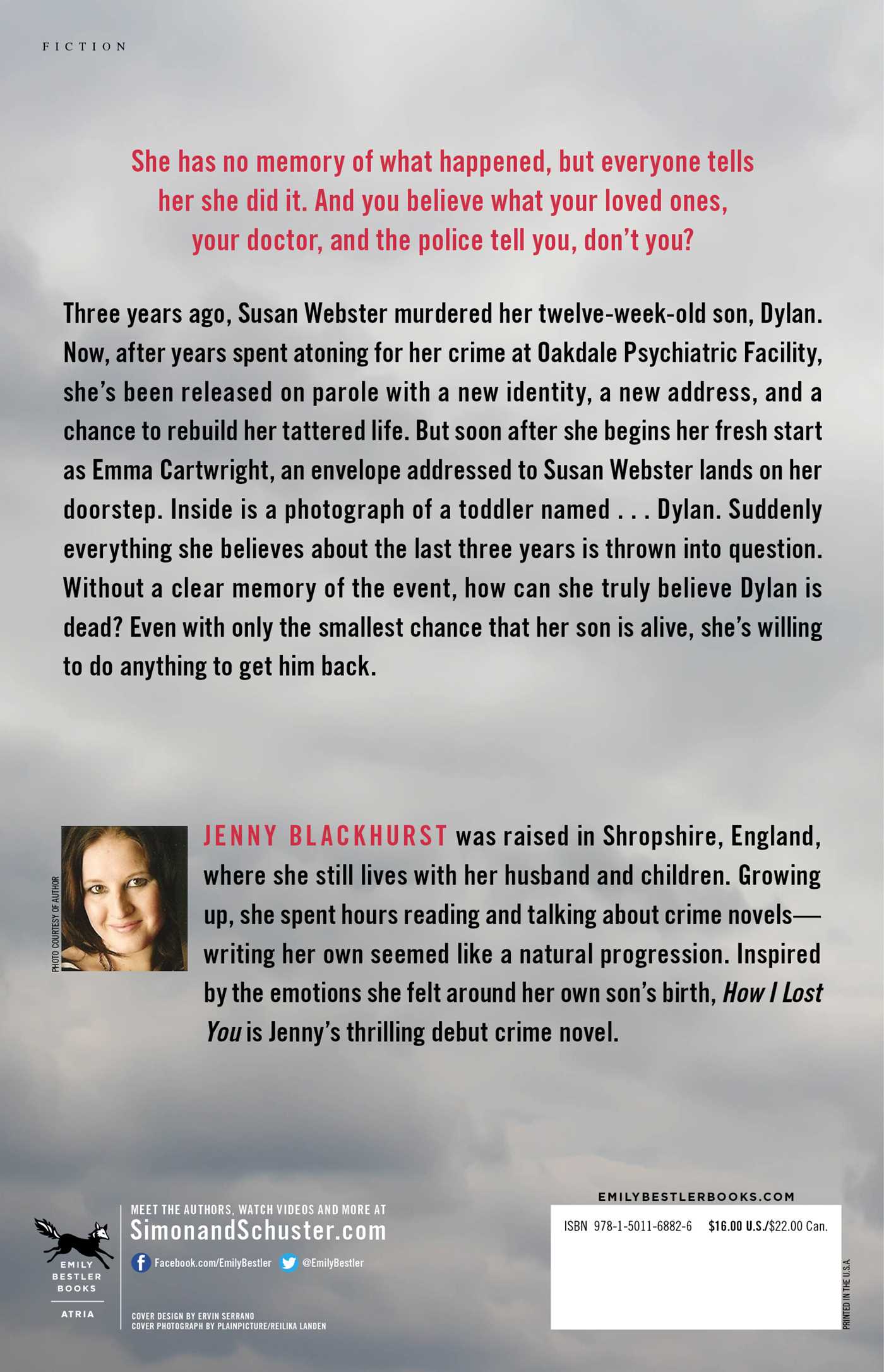 How I Lost You

By Jenny Blackhurst
LIST PRICE $16.00
PRICE MAY VARY BY RETAILER

“An addictive read; a strong recommendation for those who like suspense tinged with a little romance.”—Booklist

A woman without a memory struggles to discover the truth about her past and her identity in this cerebral and dark thriller reminiscent of works by bestselling authors S.J. Watson and Ruth Ware.

I have no memory of what happened but I was told I killed my son. And you believe what your loved ones, your doctor and the police tell you, don't you? My name is Emma Cartwright. Three years ago I was Susan Webster, and I murdered my twelve-week-old son Dylan. I was sent to Oakdale Psychiatric Institute for my crime, and four weeks ago I was released early on parole with a new identity, address, and a chance to rebuild my tattered life. This morning, I received an envelope addressed to Susan Webster. Inside it was a photograph of a toddler called Dylan. Now I am questioning everything I believe because if I have no memory of the event, how can I truly believe he's dead? If there was the smallest chance your son was alive, what would you do to get him back?

No matter how many times I leave the room and try to go about my normal life, every time I go into the kitchen, there it is.

It arrived this morning, hidden underneath the brightly colored junk mail and ominous-looking bills. I dread receiving the mail as it is. Sunday is my favorite day of the week.

No mail on Sundays. Except today isn’t Sunday. And today there is mail.

I can only guess that my hatred of all things enveloped is down to the sheer volume of bills I receive every day. I’ve only been here four weeks and it seems every utilities company in the country is trying to bill me for something. Each and every “To the Occupier” letter I receive reminds me of something I’ve forgotten to set up a direct debit for, depressing me about how disorganized I am and how far my meager funds need to stretch.

What arrived in the mail today isn’t a bill, though. I know that by the handwritten envelope. It isn’t a letter from a friend or pen pal. It’s postcard size, and brown. The writing is small and cursive; it looks like it belongs to a woman but I can’t be sure. None of these things are the reason it’s still on my kitchen countertop, unopened.

I could just put it straight in the bin. I could wait until my friend Cassie comes over and ask her to open it, like a student getting her mum to peek at her A-level results. Walking over to the envelope again, I see the words written on the front and my heart begins to race.

But Susan Webster is dead now. I should know; I killed her four weeks ago.

No one in the world is supposed to know who I am or where I am. That was the idea of changing my name legally. Even my parole officer calls me Emma; sometimes I still forget to answer. My new name is Emma Cartwright. You won’t know me by that, though. Four years ago I was still Susan Webster. I can picture you now, you’re screwing up your nose a bit; maybe you recognize the name from somewhere, can’t quite place it? Your eyes might flick up and to the left as you try to remember. If you live in the north, you might mutter something like “Oh yeah, wasn’t that the woman who killed her baby? Such a shame.” More likely if you live elsewhere in the country you won’t remember me at all. The news broke at the same time that a major celebrity was caught dealing drugs. My son and I were only found on the inside pages of the nationals.

I’m going to do it. Hands trembling, I tear open the envelope, taking care not to rip what’s inside. As the small piece of card falls into my hands, I wonder for a second if I should be wearing gloves, if it’s some kind of threat and the police will need it as evidence. It might sound strange to an ordinary person, worrying that my mail might be filled with death threats. Believe me, it’s a situation I would never have imagined myself in either.

It’s too late to worry about forensics now. Anyway, it isn’t a letter; it’s a photograph. A young boy smiles widely at the camera, a warm, genuine, beautiful smile. My fear turns to confusion. Who is he? I don’t know any children that age; he’s around two or three, maybe. I have a niece but no nephew, and the few mums and babies I’d met at baby groups before . . . well, just before . . . have stayed away, probably blocking out what happened as though Dylan and I had never existed.

Why has this been sent to me? Scanning my memory for children I know, I throw it down. It turns in midair, landing facedown on the counter, and it’s at that moment that my whole world narrows to the size of the four-by-six-inch photograph in front of me. Written on the back, in the same neat handwriting, are just three words:

Jenny Blackhurst grew up in Shropshire where she still lives with her husband and children. Growing up she spent hours reading and talking about crime novels so writing her own seemed like natural progression. She is the author of How I Lost You and Before I Let You In.

"An outstanding and original thriller with a complex relationship between three women at its heart and an explosive conclusion."

– B.A. Paris, New York Times bestselling author of Behind Closed Doors, on BEFORE I LET YOU IN

“Dark, twisty, and intricately plotted, How I Lost You kept me glued to the pages. I read it in one sitting, couldn’t put it down!”

– -A. J. Banner, #1 Kindle and USA Today bestselling author of THE GOOD NEIGHBOR and THE TWILIGHT WIFE

“Susan’s engaging character and the story's well-crafted twists make this an addictive read; a strong recommendation for those who like suspense tinged with a little romance.”

"Blackhurst has got the right formula for a clever psychological thriller."

"Books like How I Lost You are the reason I love reading . . . I haven't been this enraptured with a story in years . . . . I didn't have the slightest inkling what was coming. I didn't know who was a culprit, I didn't know anything, and I was so very happy in my ignorance!"

"If you enjoy a book full of twisted suspense that is dark, gripping, and a bit disturbing, go ahead and pick up Jenny Blackhurst's HOW I LOST YOU and add it to your fall line up!"

– The Suspense is Thrilling Me

"A novel that will keep you guessing until the end . . . I recommend this to fans of Ruth Ware and Paula Hawkins."

How I Lost You

By Jenny Blackhurst
LIST PRICE $16.00
PRICE MAY VARY BY RETAILER