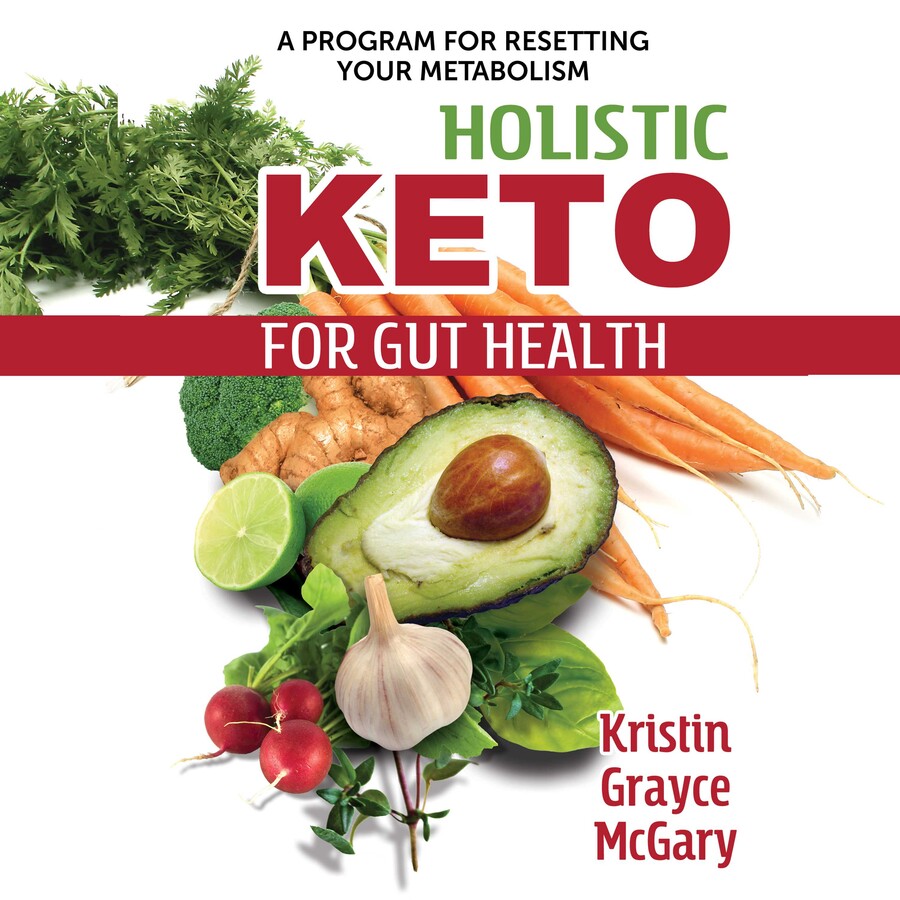 Do you feel exhausted? Experience foggy thinking and mysterious symptoms that come and go--symptoms your doctors can’t figure out and yet they keep prescribing more and more medications? Do you have headaches, congestion, or allergies? Do you suffer from joint pain, sleep challenges, hormone imbalances, skin problems such as eczema and psoriasis, thyroid dysfunction, or any other autoimmune disorder? Holistic healthcare expert Kristin Grayce McGary reveals that the answer to resolving your health challenges may lie in comprehensive gut repair.

Combining the best gut-healthy elements of primal, paleo, and ketogenic nutritional plans, McGary offers a one-of-a-kind approach for optimal digestive health. Unlike the traditional keto diet, which contains inflammatory foods, McGary’s science-based, functional ketogenic program emphasizes a holistic nutritional and lifestyle plan to repair your gut while avoiding the dangers of gluten, dairy, soy, starches, sugars, chemicals, and pesticides. She reveals how nearly everyone has some degree of gut damage and explains how this impacts your immune function, energy levels, and many health issues.

Drawing on her extensive knowledge of blood chemistry analysis and how to halt and prevent autoimmune challenges, McGary details the right kind of lab tests needed for proper diagnosis of food sensitivities and autoimmune disorders and where to get them--helping readers overcome the ongoing misdiagnosis that millions with gut problems and autoimmunity symptoms suffer. Additionally, she provides a thorough list of supplements and foods for gut healing, delicious recipes that leave you feeling satisfied and strong, and contemplative exercises to help you dive even deeper into healing.

From Chapter 1: An Epidemic of Autoimmunity and the Unhealthy Gut

All these factors impact your overall health and well-being, especially your gastrointestinal health, where the gut’s capacity to absorb nutrients becomes impaired, resulting in malnourishment (even as you overeat) which contributes even more stress.

The gut is the throne of immune function. The complex enteric nervous system (often referred to as the second brain) located in your gut is a vital organ that affects every aspect of your physical, emotional, and psychological health. If there’s any imbalance, your body is compromised, and you will suffer in some way . . . eventually.

Bottom line, if you’re alive on the planet today, your gut is under attack, and the epidemic of autoimmunity and autoimmune disease, cancer, and allergies in the United States today is proof. These are all symptoms of immune dysfunction. Autoimmunity occurs when your immune system is misdirected and attacks your body by making antibodies against your own tissues.

Symptoms of immune and gut dysfunction are ubiquitous and rarely identified as what they really are. Hypersensitivities to foods or to environmental allergens such as pollen, perfumes, toxins and cleaning products often appear prior to a full-blown autoimmune disease. Digestive disorders including constipation, diarrhea, gas, bloating, excess weight, abdominal or stomach pain or discomfort, gastroesophageal reflux disease (GERD or acid reflux), irritable bowel syndrome (IBS) or irritable bowel disease (IBD), and blood or mucus in your stools are so common few doctors relate them to autoimmunity. Recurrent infections, joint and muscle pain and swelling, rheumatoid arthritis, cancer, lupus, scleroderma, Hashimoto’s thyroiditis, type 1 diabetes, immune dysfunction disorder (also known as chronic fatigue), and Epstein Barr virus are also autoimmunity and gut problem indicators that usually end up not being treated at the level of gut function. Which means the number of people affected in the U.S. is realistically closer to 72 million--nearly a quarter of the population.

First off, please note that when I talk about diet I’m not talking about the modern concept of the word--a fad or weird formula of eating you painfully embrace for a few weeks in order to lose weight on some crash program. The functional ketogenic gut repair program is the exact opposite of a fad diet. It might be better and more accurate to call it the Functional Ketogenic Lifestyle, because this is about making an overall nutritional, lifestyle, and attitudinal change about your food and health.

Secondly, please note that ketosis is not the same thing as ketoacidosis. Sometimes people misunderstand and confuse these two terms. Ketoacidosis is a dangerous metabolic state that can even be fatal, most often occurring in untreated type 1 (insulin-dependent) diabetics. There is some debate as to whether a ketogenic diet is healthy for people with any type of diabetes. The literature points to positive benefits in preventing, halting, and even reversing diabetes symptoms by lowering blood glucose and hemoglobin A1c levels. This is especially effective for type 2 (non-insulin-dependent, that is, “adult onset”) diabetes and is effective in type 1 diabetes with the guidance of a knowledgeable healthcare practitioner.

Ketosis is the metabolic state in which the body relies primarily on fats rather than carbohydrates for fuel. It’s the natural (and desirable) state to evoke, because over millions of years we’ve evolved to store fat when food is abundant and to burn fat when food is scarce. This is the essential formula for a true ketogenic-type nutritional plan. After all, most of us aren't going without food for extended periods as our ancestors once did. And Paleo diets that feature high-carbohydrate foods (e.g., starchy root vegetables) that appeal to sugar/carb addicts, fail to deliver the metabolic benefits of a high-fat, low-carbohydrate, true ketogenic-type diet.

Unlike other diets, the functional ketogenic gut repair program is:

5) high in a wide variety of vegetables

“Western medicine has shown its value in diagnosing and treating disease but is often lacking in explaining the origins of autoimmune and inflammatory disease states--specifically the role the gastrointestinal system plays in maintaining homeostasis. In her book Holistic Keto for Gut Health Kristin Grayce McGary bridges the gap between conventional and holistic medicine while staying true to her scientific roots; she clearly has a mastery of her field. Many of my patients would benefit from understanding the topics covered in this book.”

“In a world of fad diets and nutritional confusion, Kristin Grayce McGary provides a fresh new insight into the role of nutrition in health and healing. Her nutrition recommendations are grounded in science and the latest research into the gut microbiome. If you suffer from any chronic illness or autoimmune disease and are struggling in the world of conventional medicine, you need to read this book. It has the potential to accelerate your journey to optimal health.”

– Nauman Naeem, MD, author of Healing from the Inside Out

“Kristin Grayce McGary has identified the problems that underpin poor health and immunity and offers solutions. Offering cutting-edge ideas combined with common sense and delicious recipes, Holistic Keto for Gut Health is a must-read if you suffer from any type of chronic condition. McGary is an impressive author with good clinical sense and a pioneer in her field. Highly recommended!”

“This book could save your life! Holistic Keto for Gut Health is an authoritative text combined with tasty recipes that teaches you how to use food as medicine. I’m grateful to have such a comprehensive guidebook as a personal resource as well as to share with all of my students and clients.”

– Darren R. Weissman, D.C, developer of the LifeLine Technique and author of Awakening to the Secret C