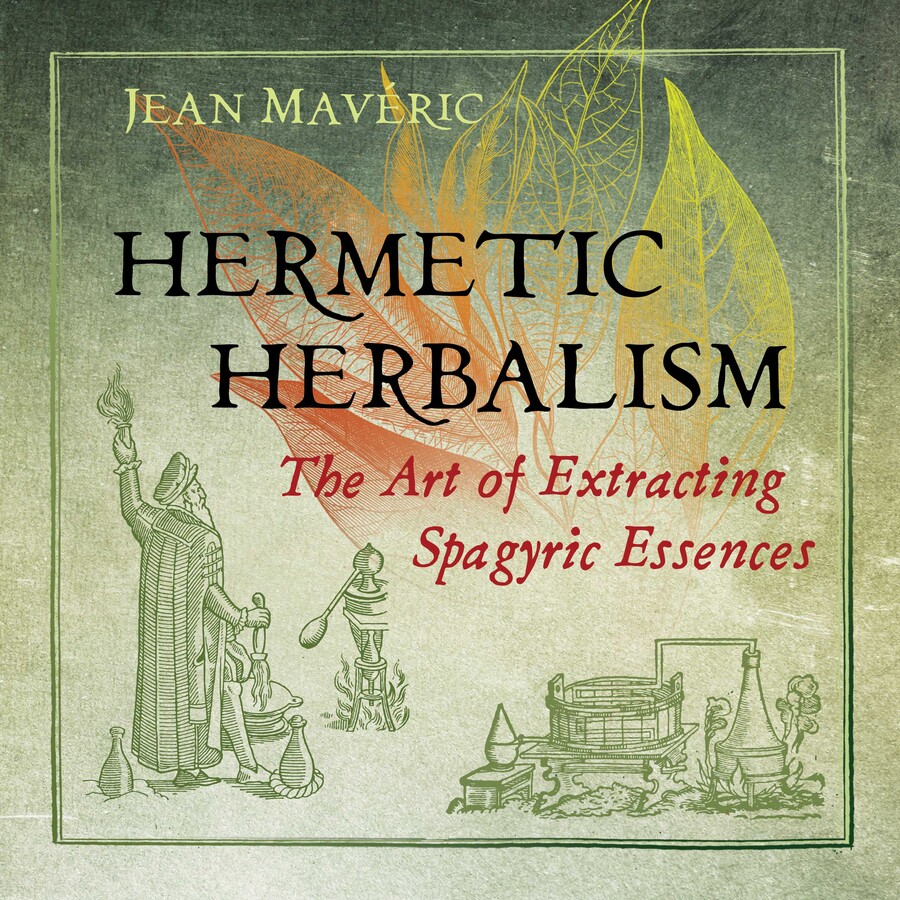 • Includes a large collection of recipes for spagyric medicines and quintessences, with detailed step-by-step instructions, adapted from celebrated spagyrists such as Paracelsus, Pseudo-Lull, Philipp Ulstad, and Nicaise Le Fèvre

• Provides botanical and medicinal classifications of over 600 plant species along with their astral natures, elemental qualities, and planetary and zodiacal signatures

First published in French in 1911, this practical guide to the art of spagyrics begins by outlining the ancient yet often forgotten Hermetic foundations of herbalism. Author Jean Mavéric provides botanical and medicinal classifications of over 600 plant species along with an in-depth study of their astral natures, elemental qualities, and planetary and zodiacal signatures as well as practical advice on the appropriate times to harvest plants and administer herbal remedies and quintessences.

Reviewing the general principles and procedures of premodern chemistry, Mavéric then explores the secret doctrines and operations of the spagyric art. He offers a large collection of recipes for spagyric herbal preparations adapted from celebrated spagyrists such as Paracelsus, Pseudo-Lull, Philipp Ulstad, Jan Baptist van Helmont, Oswald Croll, and Nicaise Le Fèvre, providing detailed step-by-step instructions for a veritable pharmacopeia of spagyric extracts, tinctures, elixirs, liquors, oils, unguents, salts, aquae vitae, and quintessences. Mavéric also shares his intricate theory of astral medicine and advocates a seasonal “Hermetic diet” designed to keep the humors of the body in equilibrium and prevent the onset of illness. In the final section of the book, Mavéric focuses on the more advanced methods and techniques of Paracelsus, Helmont, and George Starkey, unraveling the mysteries of manufacturing alkalis, alkahests, and menstrua and divulging his own secret formula for a universal circulatum.

Available now for the first time in English, this occult classic unveils the art of extracting spagyric essences to a modern audience while also bringing the science of herbal medicine back to its Hermetic roots.

The adjective “Hermetic” derives from the modern Latin hermeticus, after Hermes Trismegistus, the Egyptian Moses whose colossal science illuminated antiquity with divine light. The term hermeticus, however, much like occultus (literally, “hidden” or “secret”), actually means “closed” or “invisible,” which is to say, it is a science that is closed and invisible to the unclean and to the blind, for only those whose eyes have beheld the Light of Truth may cross the threshold of the Hermetic Sanctuary.

For most authors, the adjective “spagyric” means “to purify by resolution.” According to Gerardus Johannes Vossius, this Latinate compound means “to concretize rarefied matter,” in other words, to ameliorate the substance in the evolutive state (or first matter) in order to purify other matter with the aid of the resultant. On the other hand, according to Nicolas de Locques, “spagyric physician” to King Louis XIV, the term spagyrie signifies “quicksilver” and refers to the art of separating Mercury from bodies. Be that as it may, we understand the term to refer to any chemical operation that proceeds by analogy from natural laws. To separate Mercury is to extract spirit from matter, to extract the quintessential from the corporeal. All bodies are composed of matter and spirit. Matter is passive and inert, whereas spirit is an active and vital principle imbued with the Divine Thought, the prime mover in the evolutionary process. It is clear, then, that the virtue of mixed bodies resides in the spirit and that the spirit is much more active when it is freed from its corporeal prison.

The entire physical side of the spagyric art is concerned with this separation or extraction. To obtain the spirit at its maximum virtue, it must be exalted, and in order to exalt it, it is necessary to mature (or evolve) and ripen it, in other words, to corrupt its body, the way a seed must putrefy in the ground before it is able to germinate. This putrefaction is nothing other than the evolution of matter, by which the atoms of a given substance separate themselves from heterogeneities, constrict, purify, and exalt themselves, and elevate themselves to a much more noble latitude than that of their primitive state. The whole of the spagyric art consists in provoking the evolution of matter in order to purify and exalt it, and this is achievable solely through the subtle and protracted operations the old spagyrists left hidden in the shadows of obscurity.

Spagyric preparations accord with the natural mechanisms of Universal Generation. An understanding of these mechanisms will enable the practitioner to extract powerful quintessences whose atomic constitution is so ennobled as to be readily assimilable to our human nature. Such quintessences penetrate the human organism and purify it in a natural and harmonic manner. The ancient sages understood the nature of first and second causes, from which they deduced via synthesis their effects and analogies in the lower world. In this manner they came to understand the process of the alchemical work, which is the analogical reproduction of Universal Generation in the mineral kingdom, a subject concerning which even the most accomplished modern scholars have understood next to nothing.

Hermetic herbalism is based on the knowledge of universal laws, first in their intimate nature and then in their effects and analogies. It is essential that the practitioner know the nature of the astral and elemental influences as well as what causes are likely to modify the nature of these influences. In addition, the practitioner cannot ignore the effects these influences have on the organized world or the analogical correspondences that unite the macrocosm with the microcosm.

All this knowledge constitutes a synthesis that is at once simple, grandiose, and subtle. It is simple because its laws are the laws of nature, by which human beings were created. It is grandiose because it embraces the evolutionary process of the whole of creation. It is subtle because its intimate conception cannot be grasped by human reason, which is limited to our imperfect control of the physical senses and obscured by the errors inherent in social education. To acquire any notion, one must understand not only its purpose, function, and form (which is the domain of reason), but also, and above all, one must ingest and digest its intimate spirit, by way of the soul, until it is completely assimilated. In short, one must penetrate the nature of the thing, to the point of living it within oneself.

The practice of this secret path requires that the student show a natural inclination to grow and develop gradually, by a long process of evolution, or rather, involution, on an ascending course that leads from impure to pure, from dross to divine. In other words, it is necessary to free the soul from its carnal prison by delivering it from the demands of egoism, by breaking the ties that bind it to the instinct, and by purifying oneself constantly on the physical, psychical, and intellectual planes. This tripartite sublimation is absolutely necessary to release the rays of the Intellective Light by which initiates gain entry into the Hermetic Sanctuary.

The science of Hermetic herbalism is much less arid than that of Hermetic mineralogy, which includes the alchemical work. So-called erudition, which overloads the memory with a host of details and conventions, is useless in this art. Curiosity, on the other hand, can be extremely hazardous if it is not legitimated by a pure and disinterested conscience. In sum, to attain this great knowledge one must free oneself from preconceived notions and contingencies and study patiently, modestly, and humbly, starting with the rigorous examination of oneself.

To conclude this brief introduction, we would like to stress to our readers that this book is no mere compilation, despite the numerous authors we consulted in the process of writing it. The works of the masters are comparable to matter, from which readers must extract the quintessence.
Jean Mavéric

Little is known about the life of the writer behind the pseudonym Jean Mavéric except that he was a prominent figure in occult and alchemical circles in Paris in the early twentieth century. He was affiliated with Papus’s École hermétique, where he taught courses in Hermetic philosophy and astrology, and was also an active member of the Société alchimique de France, a group of practicing occultists devoted to the study and revival of alchemy. Jean Mavéric also wrote under the pseudonyms “Jean Bélus” and “Jean Petit,” the latter of which appears to corroborate occult bibliographer Albert Louis Caillet’s assertion that “Jean Mavéric” was the nom de plume of Maurice Petitjean.

“A must-have textbook for any student of alchemy, herbal astrology, and esoteric herbalism. A pivotal addition to the library, as both reference and operative, giving the reader a strong and comprehensive journey into the underlying auspices and elements of the Hermetic arts.”

“Hermetic Herbalism comes to us at a time when esoteric herbalism is regaining consciousness. The verdant wisdom in this book is needed to lead us out of the fog of our waking.”