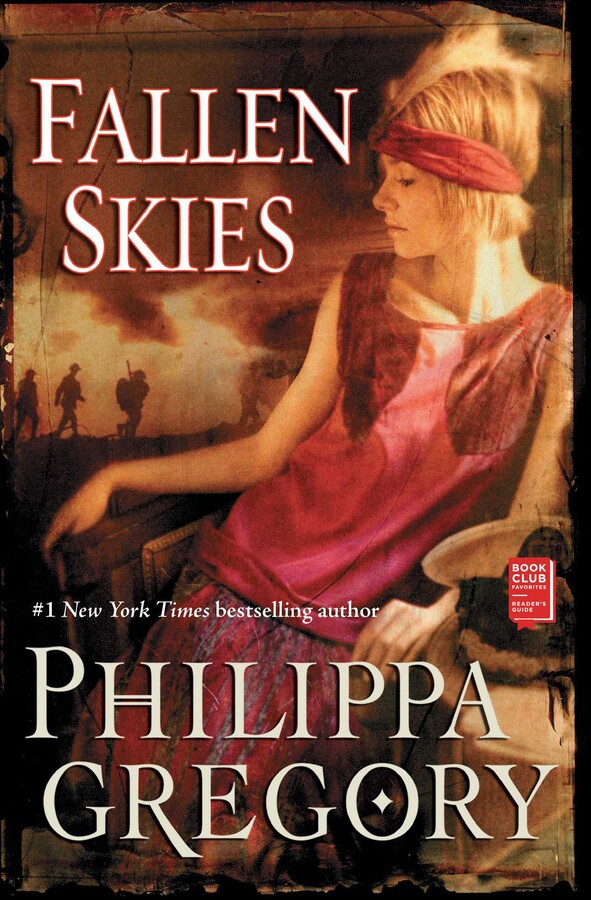 Fallen Skies takes readers to post-World War I England in a suspenseful story about the marriage of a wealthy war hero and an aspiring singer he barely knows.

Can a family's mannered traditions and cool emotions erase the horrors of war from a young couple's past?

Now back in print from New York Times bestselling author Philippa Gregory, Fallen Skies takes readers to post-World War I England in a suspenseful story about the marriage of a wealthy war hero and an aspiring singer he barely knows.

Lily Valance is determined to forget the horrors of the war by throwing herself into the decadent pleasures of the 1920s and pursuing her career as a music hall singer. When she meets Captain Stephen Winters, a decorated veteran, she's immediately drawn to his wealth and status. And Stephen, burdened by his guilt over surviving the Flanders battlefields where so many soldiers perished, sees the possibility of forgetting his anguish in Lily, but his family does not approve.

Lily marries Stephen, only to discover that his family's façade of respectability conceals a terrifying combination of repression, jealousy and violence. When Stephen's terrors merge dangerously close with reality, the truth of what took place in the mud and darkness brings him and all who love him to a terrible reckoning.

By clicking 'Sign me up' I acknowledge that I have read and agree to the privacy policy and terms of use. Free ebook offer available to NEW US subscribers only. Offer redeemable at Simon & Schuster's ebook fulfillment partner. Must redeem within 90 days. See full terms and conditions and this month's choices.
This reading group guide includes suggested questions that are intended to help your reading group find new and interesting angles and topics for your discussion. We hope that these ideas will enrich your conversation and increase your enjoyment of the book.

1.      Discuss the D. H. Lawrence quote from Lady Chatterley’s Lover that opens Fallen Skies. How does this epigraph relate to the novel’s title? How have the skies fallen for Stephen and Lily?

2.  Stephen is first attracted to Lily because she reminds him of the time before the war. “She looks like there had never been a war” (page 4). He thinks she will help him forget the atrocities he witnessed and committed. Why do you think his marriage to Lily fails to clear his conscience and erase his nightmares? Were his expectations of her unrealistic?

3. “A solitary rebel, [Lily] pretended that the war, which overshadowed her childhood and drained it of joy, did not exist” (page 34). Do you think Lily’s efforts to ignore the war and its aftermath helped her to survive difficult times or failed to prepare her for reality?

4. Coventry and Rory are literally silenced as a result of their wartime experiences. Discuss each man’s muteness and eventual recovery.  What do you think helped each man to reclaim his ability to speak?

5. Does Stephen’s relationship with his brother, Christopher, seem to surpass sibling rivalry? How has Stephen let his envy become completely out of control? Do you think Muriel and Rory played any part in exacerbating the tension between their two sons?

6. Discuss the way marriage is portrayed in the novel. Was there evidence of any happy unions? What are your feelings about the divorce laws and the understanding regarding sexual relations between husband and wife? How do you think Lily’s story may have developed if the novel took place today?

8. Discuss Lily’s reaction to her mother’s death (page 125) and then, later, her reaction to her baby’s disappearance. Do you think she was hysterical? How do the two events act as bookends to her relationship with Stephen? How has she grown and matured in the interim?

9. Discuss the beliefs about sex among the upper class in the novel.  Muriel claims that “A lady does not enjoy it. . . . Bad girls are the same as prostitutes” (page 153). Stephen is also pleased that Lily seems to dislike sex. How do these beliefs affect Lily and Stephen’s marriage? How does the power dynamic develop given this understanding?

10. Do you think that what Charlie and Lily shared could be considered an affair? In the absence of physical union, does a strong emotional connection still constitute infidelity? Where should the line be drawn?

11. “People live on islands . . . alienated from each other by a thousand rules of conduct” (page 450). How has a strict adherence to good manners affected some of the characters in the novel? When has unflinching conduct aided them? When has it hurt them? How did Lily learn to use it to her advantage?

12. Both Charlie and Stephen came out of the war forever altered. Whose ailment do you think was more unendurable? Are they comparable? Is either man capable of living a fulfilling life? Do you agree with John Pascoe that “perhaps it was easier for those . . . who had never come home” (page 417)?

13. World War I is sometimes idealized as a battle of suffering by the brightest and best in English society. Gregory’s account of the war is far darker and shows English soldiers as responsible for an atrocity.

14.  What does the novel gain from this rejection of a romantic view of war? Do we as readers learn anything?