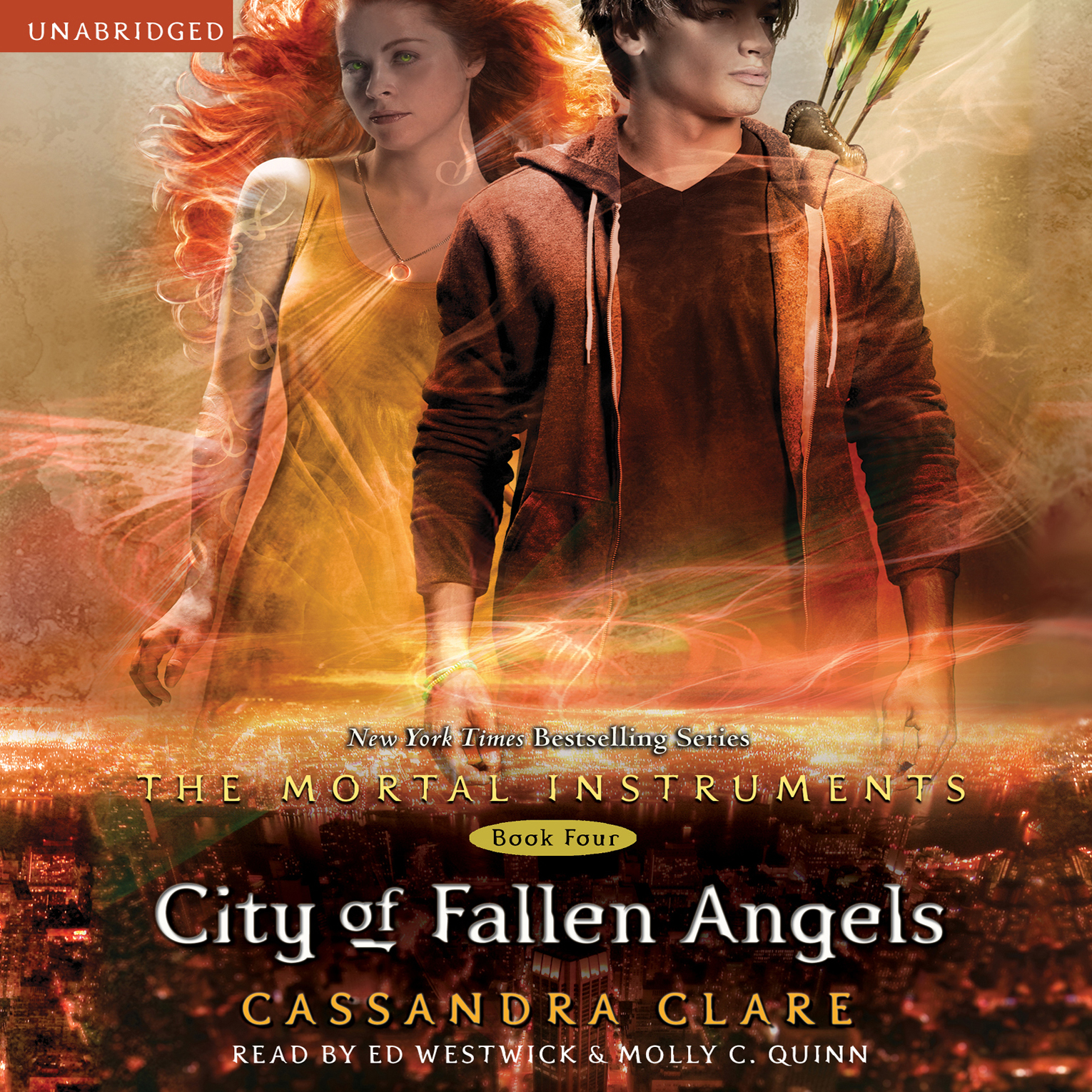 Top 10 Things That Are NOT Going to happen in CITY OF FALLEN...

Trust is dangerous, and to love is to destroy. Plunge into the fourth installment in the internationally bestselling Mortal Instruments series and “prepare to be hooked” (Entertainment Weekly)—now with a gorgeous new cover, a map, a new foreword, and exclusive bonus content! City of Fallen Angels is a Shadowhunters novel.

The Mortal War is over, and sixteen-year-old Clary Fray is back home in New York, excited about all the possibilities before her. She’s training to become a Shadowhunter and to use her unique power. Her mother is getting married to the love of her life. Downworlders and Shadowhunters are at peace at last. And—most importantly of all—she can finally call Jace her boyfriend.

But nothing comes without a price.

Someone is murdering Shadowhunters, provoking tensions between Downworlders and Shadowhunters that could lead to a second, bloody war. Clary’s best friend, Simon, can’t help her—his mother just found out that he’s a vampire, and now he’s homeless. When Jace begins to pull away from her without explaining why, Clary is forced to delve into the heart of a mystery whose solution reveals her worst nightmare: she herself has set in motion a terrible chain of events that could lead to her losing everything she loves. Even Jace.

The stakes are higher than ever in the #1 New York Times bestselling fourth installment of the Mortal Instruments series.

The Mortal War is over. Valentine has been killed, along with his evil son, Sebastian. Jocelyn is going to marry Luke, and Clary is training to be a Shadowhunter. The Clave is sorting through the chaos left behind by the war, and Shadowhunter and Downworlder alike are mourning their dead. Everything is getting back to normal—or at least as normal as life can be for this battle-weary group. But maybe normal is too much to ask. Head vampire Camille is back in New York City and she wants Simon’s help in ousting Raphael. Jace is pulling away from Clary, and despite Clary’s best efforts to discover the reason, she’s left painfully in the dark. And, to top it off, someone is killing the former members of Valentine’s inner circle, and the Clave can’t figure out who—or why. As Clary and her friends struggle to adjust to the changes in their lives and loves, dark forces gather that may be too much for these Shadowhunters to handle. Will Clary and her friends ever be able to trust each other enough to fix what’s broken in their world?

1. How does Simon feel about vampires being part of pop culture—used as a Halloween decoration or to teach children to count? How does his life differ from this pop culture representation? Why do you think vampires have had a resurgence in popularity over the past five or ten years?

2. Simon finds Camille’s subjugates disturbing, with their lack of free will and their strong bonds to their master. How does this master/subjugate relationship compare to Simon’s relationship with Clary, which some would define as too dependant? How much free will—how much choice—does Simon have when it comes to protecting Clary? And how is his relationship to the other Shadowhunters similar to or different from the subjugate/master relationship?

3. Is the Mark of Cain a gift or a curse for Simon? What does it allow him to do? What is the price he pays? Camille quotes the bible, saying “And Cain said unto the Lord, My punishment is greater than I can bear.” Does the Mark of Cain end up being more than Simon can bear?

4. How does Simon’s mother react when she learns that he is a vampire? Why is this reaction so upsetting to him? Is her reaction reasonable?

5. What does Jace’s recurring dream signify to him? What is it about his upbringing that makes the dream take on such importance? Why does Lilith start her possession of him with this dream?

6. Chapter Four starts with the inscription above the front doors of the Brooklyn Public Library. Why do you think Simon is focusing on these words while he waits for Raphael? Why did he choose the library as their meeting place?

7. Clary tells Jace, “I wish I could say things the way you do . . . You always find the right quote, or the right thing to say to make me believe you love me.” Can you think of any instances where Clary does think of the right thing to say? Are there other ways that she shows Jace how she feels about him? Why do you think that Jace relies so heavily on the words of others, instead of just telling Clary what is going through his head?

8. Why are Luke and Clary so disturbed by the reanimation rune that they used to try to get information from the slain Shadowhunter? What does this teach Clary about her ability to create new runes?

9. In what ways is the Praetor Lupus similar to the Shadowhunters? Why are they so secretive? Could they be more productive if they shared information more readily? Do you think they are a noble organization, or are they more self-serving?

10. Part Two begins with a quote from Ted Hughes about payment. Do you agree with the sentiment contained in the quote . . . that nothing is free? Why do you think Cassandra Clare chose this quote to begin the second half of the book? Who will be making payment—and for what—as the book draws to a close?

11. Why does Simon give Jordan a second chance? Do either of them deserve to be forgiven? Do they feel guilty for the same reasons?

12. What does it mean to Magnus Bane to be immortal? How does it affect his dealings with mortals? Why does Simon choose not to think about his immortality?

13. Why does Jace need a ritual of protection from the Silent Brothers? Are there other repercussions from the request that Clary made of the angel Raziel?

14. What situations could have been prevented if those involved had merely communicated with one another? What reasons, if any, do they have for not communicating?

15. Why is Lilith so intent on bringing Sebastian back to life? What is she planning on doing after this is accomplished? Do you find any of her motivations commendable, even if her methodology is demonic and evil?

16. What role does Camille play in these events? Why does Alec decide to set her free?

17. Why is Simon so loathe to consume the blood that he needs to stay alive? What is it like for him the first time he feeds from a human? Overall, does abstaining from drinking human blood make him better than the other vampires?

18. What are Lilith’s followers trying to do when they inject foreign blood into their babies? Why do you think they were willing to follow Lilith and enact her plan?

1. Simon needs blood in order to survive, but non-vampires also sometimes need blood to survive. Find a blood drive in your community and consider donating. If you’re too young or otherwise unable to donate blood, perhaps you can volunteer at a blood drive.

2. On the night that Jace tells Clary why he’s been pulling away, she compares him to a Modigliani painting. Find some examples of Modigliani’s work and write a paragraph about the traits that Clary was recognizing in Jace.

3. Kyle gets close to Simon by auditioning for his band. Do you play an instrument? Join some of your musical friends in forming a band of your own.

4. Camille meets Simon for the first time in a restaurant terrace that has an example of trompe l’oeil painting. What characterizes this type of art? Are there any examples of trompe l’oeil in your community that you can visit? If not, can you think of someplace where a piece of this work would make sense? See if you can make this happen.

Cassandra Clare is the author of the #1 New York Times, USA TODAY, Wall Street Journal, and Publishers Weekly bestselling Shadowhunter Chronicles. She is also the coauthor of the bestselling fantasy series Magisterium with Holly Black. The Shadowhunter Chronicles have been adapted as both a major motion picture and a television series. Her books have more than fifty million copies in print worldwide and have been translated into more than thirty-five languages. Cassandra lives in western Massachusetts with her husband and three fearsome cats. Visit her at CassandraClare.com. Learn more about the world of the Shadowhunters at Shadowhunters.com.