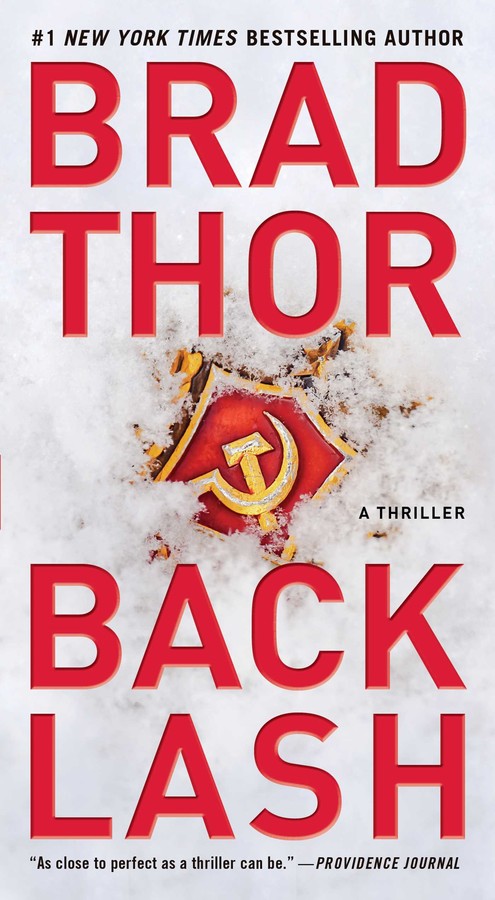 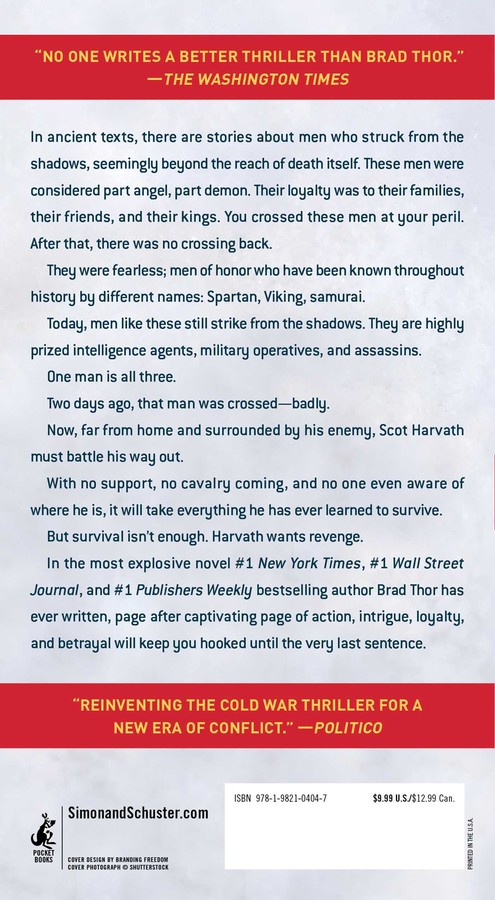 Book #18 of The Scot Harvath Series
By Brad Thor
LIST PRICE $9.99
PRICE MAY VARY BY RETAILER

“Raw emotion, nonstop action, and relentless pacing makes Backlash another one-night read from Brad Thor, who delivers the book to beat in 2019.” —The Real Book Spy

#1 New York Times, #1 Wall Street Journal, and #1 Publishers Weekly bestselling author Brad Thor is back with his most gripping thriller yet!

In ancient texts, there are stories about men who struck from the shadows, seemingly beyond the reach of death itself. These men were considered part angel, part demon. Their loyalty was to their families, their friends, and their kings. You crossed these men at your peril. And once crossed, there was no crossing back.

They were fearless; men of honor who have been known throughout history by different names: Spartan, Viking, Samurai.

Today, men like these still strike from the shadows. They are highly prized intelligence agents, military operatives, and assassins.

One man is all three.

Two days ago, that man was crossed—badly.

Now, far from home and surrounded by his enemy, Scot Harvath must battle his way out.

With no support, no cavalry coming, and no one even aware of where he is, it will take everything he has ever learned to survive.

In the most explosive novel Brad Thor has ever written, page after captivating page of action, intrigue, loyalty, and betrayal will keep you hooked until the very last sentence.

The transport plane, like everything else in Russia, was a piece of shit. For years, mechanics had swapped out its worn scavenged parts with even older parts. Cracks had been filled with epoxy. Leaking tubes and frayed wires had been wrapped with tape. A crash had been inevitable.

A booming noise, like a horseshoe thrown into a dryer, had been coming from the left engine. The pilot had throttled back, but the noise had only gotten worse.

He and the copilot had scanned their instruments, searching for clues, but hadn’t found any. Everything, right down to the cabin pressure, had appeared normal.

But suddenly, the interior had begun filling with smoke. Seconds later, the left engine died, followed by the right.

As the pilot restarted them, an explosion erupted from the right engine. Seeing the exhaust temperature spike, he immediately ordered the copilot to activate the extinguisher. They had to keep the fire from spreading to the rest of the aircraft, even if it meant shutting the right engine down permanently.

The copilot pulled the fire extinguisher handle as ordered, but they had another problem. The left engine, which had successfully been restarted, wasn’t producing enough thrust. They were falling at a rate of more than one thousand feet per minute. Over the blaring of cockpit alarms, the pilot put out a distress call.

They were flying in bad weather over one of the most remote, most inhospitable regions in the country. It was unlikely anyone would receive the transmission.

The pilot never got a chance to repeat his Mayday. The avionics and electrical system were next to go.

After trying to get the auxiliary power unit back online, the pilot instructed the crew to prepare for the worst. They were going down. Hard.

All this risk, he thought, all this danger, just to deliver one man—a man chained in back like an animal.

A Russian Special Forces team had boarded him with a hood over his head. No one had seen his face. The entire crew had assumed he was a criminal of some sort; maybe even a terrorist. They had been informed that he was dangerous. Under no circumstances were any of them to speak with or get anywhere near the prisoner.

But that was before they knew the plane was going to crash.

Moving quickly to the rear of the aircraft, the plane’s loadmaster approached the large Spetsnaz soldier sitting nearest the prisoner.

“You need to put an oxygen mask on him,” he said in Russian.

The operative, who already had his mask on, looked at the hooded prisoner, adjusted the submachine gun on his lap, and shook his head.

Career Russian Air Force, the loadmaster was used to transporting elite operators. He was also used to their bullshit.

The soldier shot a sideways glance at the intelligence officer sitting nearby.

The plane was losing altitude. The smoke in the cabin was getting worse. The officer nodded back. Do it.

The ape reached over, snatched off the hood, and affixed a mask over the prisoner’s face. Then he replaced the hood and, satisfied, leaned back in his seat.

“Now unshackle his arms so he can brace for impact,” the loadmaster continued. It enabled only a minor altering of the body’s position, but in a crash it could mean the difference between life and death. Whatever the prisoner had done, surely he didn’t deserve to die, at least not like this.

Pissed off, the soldier glanced over again at the intelligence officer. Once more, the man nodded.

Producing a set of keys, the Spetsnaz operative reached down and opened the padlock securing the prisoner’s handcuffs to his belly chain. Grabbing the man’s arms, he raised them and placed them against the seat in front of him.

“His feet as well,” the loadmaster ordered. “He must be able to rapidly evacuate the aircraft.”

The soldier didn’t need to look to his superior a third time. The intelligence officer answered for their entire team.

“The only way that man walks off this plane is with one of us,” he said from behind his mask.

The loadmaster gave up. He had done what he could and knew it was pointless to argue any further. They were out of time.

“Make sure your weapons are secure,” he directed, as he turned to make his way to his jump seat.

Suddenly, the plane shuddered and the nose pitched forward. The crewman lunged for the nearest seat and buckled himself in as anything not locked down went hurtling through the cabin like a missile.

With no instruments and no visibility, they were flying blind. The pilot and copilot fought to regain control of the aircraft.

Fifteen hundred feet above the ground, the pilots managed to pull the nose back up and slow their descent. But with no thrust from the remaining engine, they were still falling. They had to find someplace to land.

Peering through the weather, the pilot could see they were flying over a dense forest. Ahead was a clearing of some sort. It might have been a field or a frozen lake. All he could tell was that it appeared to be devoid of trees.

“There,” the pilot said.

The copilot obeyed and engaged the emergency landing gear extension system. With no electricity with which to activate the PA, he turned and shouted back into the cabin, “Brace! Brace! Brace!”

Only a few hundred feet above the ground, the pilot pulled back on the yoke to lift the aircraft’s nose in an attempt to slow it down, but he misjudged the distance.

The belly of the plane scraped across the tops of the tall snow-laden trees. The left landing gear was snapped off, followed by the right.

Just before the clearing, one of the wingtips was clipped, and the plane went into a violent roll.

Brad Thor is the #1 New York Times bestselling author of twenty-one thrillers, including Near Dark (one of Suspense Magazine’s Best Books of the Year), Backlash (nominated for the Barry Award for Best Thriller of the Year), Spymaster (“One of the all-time best thriller novels” —The Washington Times), The Last Patriot (nominated Best Thriller of the Year by the International Thriller Writers association), and Blowback (one of the “Top 100 Killer Thrillers of All Time” —NPR). Visit his website at BradThor.com and follow him on Facebook at Facebook.com/BradThorOfficial and on Twitter @BradThor.

"BACKLASH is Brad Thor's best ever thriller. But probably only until his next one."

"Thriller fans are known to plan their summer vacations around the latest Brad Thor release . . . And this year's release, BACKLASH, promises to be one of the highest-octane thrillers in years."

– CrimeReads, "The Most Anticipated Crime Books of Summer"

"One of the author's most hard-hitting novels yet."

"It's as close to perfect as a thriller can be."

"BACKLASH is a triumph."

Book #18 of The Scot Harvath Series
By Brad Thor
LIST PRICE $9.99
PRICE MAY VARY BY RETAILER