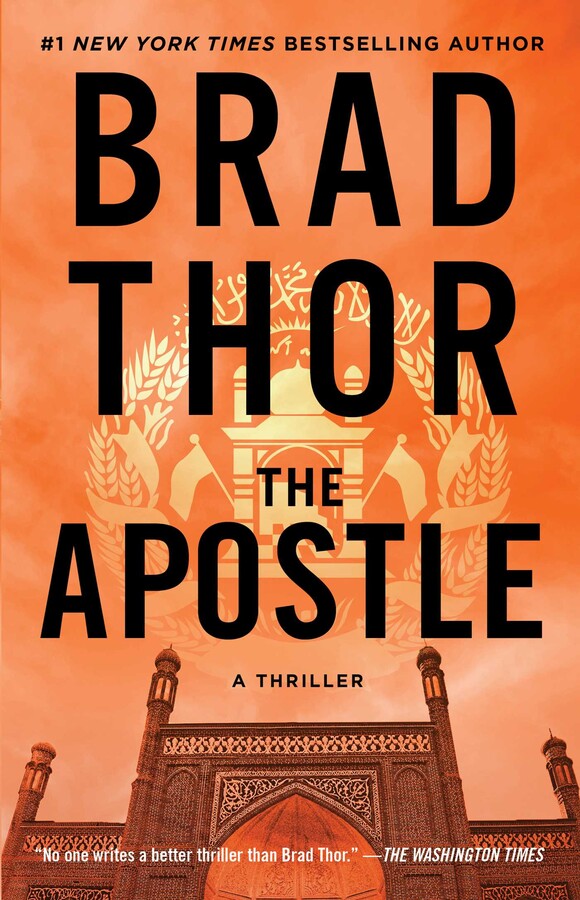 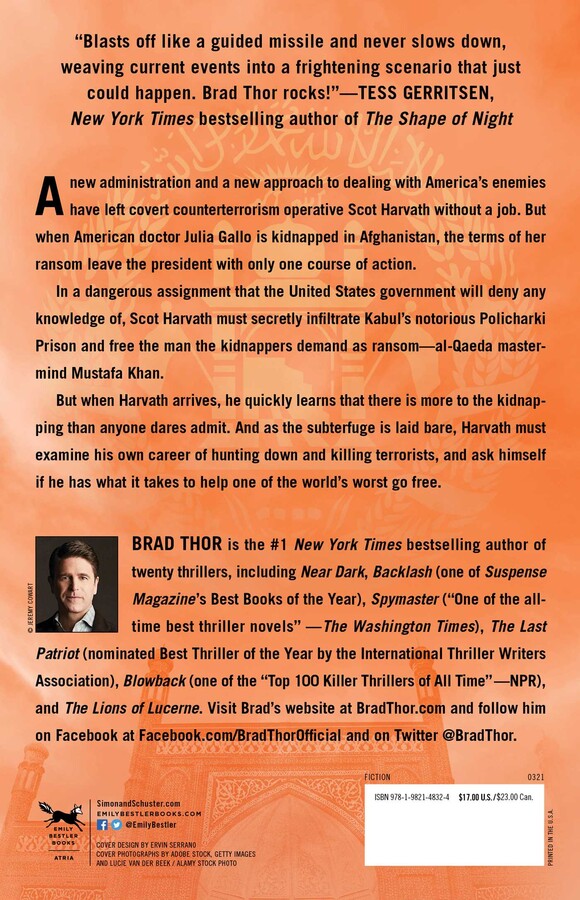 The Apostle
By Brad Thor
Read by Armand Schultz

Book #8 of The Scot Harvath Series
By Brad Thor
LIST PRICE $17.00
PRICE MAY VARY BY RETAILER

A new administration and a new approach to dealing with America’s enemies have left covert counterterrorism operative Scot Harvath without a job. But when American doctor Julia Gallo is kidnapped in Afghanistan, the terms of her ransom leave the president with only one course of action.

In a dangerous assignment that the United States government will deny any knowledge of, Scot Harvath must secretly infiltrate Kabul’s notorious Policharki Prison and free the man the kidnappers demand as ransom—al-Qaeda mastermind Mustafa Khan.

But when Harvath arrives, he quickly learns that there is more to the kidnapping than anyone dares to admit. And as the subterfuge is laid bare, Harvath must examine his own career of hunting down and killing terrorists, and ask himself if he has what it takes to help one of the world’s worst go free.

Brimming with the kind of ripped-from-the-headlines authenticity Brad Thor’s internationally bestselling novels are known for, The Apostle doubles down on the blockbuster success of The Last Patriot and reaffirms Thor’s status as the master of the political thriller.

Next to a stream of icy snowmelt from the Hindu Kush, a small caravan unloaded its contraband. Cases filled with weapons, money, communications equipment, and other gear were placed beneath a rocky overhang and covered with camouflage netting to keep them concealed from overhead surveillance.

A man in his late forties with deep Slavic features stood nearby and supervised. He had blue eyes, medium-length gray hair, and both the clothing and bearing of a local Afghan.

When his team of Pakistani smugglers was done, the man removed a stack of bills and paid them double what he normally did for bringing him into the country. It was a severance package. He wouldn’t be using them again. This was going to be his final operation.

He made himself comfortable near a stack of rams’ horns that marked a Taliban grave site and watched as the line of smugglers and pack animals disappeared back into the mountains toward Pakistan. Though he couldn’t spot them, he knew there were men in the rugged hills above, men with sophisticated weapons—weapons he had provided to them—who were keeping him in their sights.

Twenty minutes later, three muddy Toyota Hilux double-cab pickup trucks appeared from the other end of the valley. The convoy splashed across the fast-moving stream and drove up to the overhang. As the trucks rolled to a stop, young men with thick, dark beards and Kalashnikovs jumped out.

Like the man next to the rams’ horns, they were dressed in traditional Afghan clothing known as salwar kameez—baggy cotton trousers that stopped just above the ankle and loose-fitting tunics that ended just above the knee. They all wore winter coats that came to midthigh. Many slung warm wool blankets referred to locally as patoos over their shoulders to further ward off the cold. Upon their heads they wore pakols, the wide wool hat encircled by a thick, rolled brim made famous by the mujahideen during their war with the Soviets.

The men worked quickly and efficiently. Once the gear was loaded, the blue-eyed man climbed into the front passenger seat of the lead vehicle, the driver popped the clutch, and the truck lurched forward.

It was a painful, kidney-jarring ride along a rutted road that followed the snowmelt downstream into the valley. As the truck came down hard into yet another pothole, the men in the backseat erupted in a barrage of Pashtu curses.

The blue-eyed man tuned them out and stared through the spattered windshield. The landscape outside was windswept and barren. It was hard for him to believe that he had been fighting and running operations in this country for over twenty-five years. His blood had been spilled upon its soil on more occasions than he cared to remember and he had watched more men die than anyone ever should.

He loved and hated Afghanistan at the same time. It had taken far more from him than it had ever given. His body was in shambles, as was the small family he had managed to begin over the years during his short visits home. All he was left with in his life was a sweet, innocent boy who had been terribly disfigured.

The blue-eyed man blamed himself. He had known about his wife’s alcoholism. He also knew that it grew worse when he was away. Even though he’d been trained to listen to his intuition, he had ignored it when it told him that the woman could no longer properly see to their child. Had he made other arrangements for the boy, had he found a responsible caregiver to see to him while he was away, the fire might never have happened.

But it had happened, and the father wore the guilt of his son’s disfigurement across his shoulders much like the patoos across the shoulders of the Taliban fighters now riding alongside him.

He tried to forget his pain and to instead focus on his mission. It was one of the most audacious operations his intelligence service had ever considered. If it was successful, he could finally retire and would be so highly rewarded that he and his son would never want for anything else. That success, though, ultimately rested with the man he was about to meet. In the near distance, his destination finally came into sight.

The village, in Nangarhar’s rugged Khogyani district, was mostly mud houses, with some made of stone, which were set along either side of the road.

It was austere and colorless, as much of Afghanistan was. Window and door frames were unpainted. Rough-hewn beams jutted out from beneath rooftops, and none of the buildings were more than two stories tall. Dust and children and hard-looking men with guns were everywhere. No women were visible.

They were there, of course; hidden behind the thick mud walls of their houses by Taliban husbands and fathers who forbade them to work, to go to school, or even to go outside without being completely covered and with a male family member accompanying them.

The convoy ground to a halt before a high wall set with two massive double doors. The driver of the lead vehicle tapped his horn three times in quick succession. A small panel opened in the gate and a pair of angry, dark eyes peered out. Moments later the doors swung open and the convoy rolled into a typical Afghan compound known as a kwala.

When the blue-eyed man climbed out of the truck, he was greeted by one of the Taliban’s most notorious, battle-hardened commanders. Mullah Massoud Akhund stood about five-foot-eight, a good three inches shorter than the blue-eyed man, but he had a commanding presence.

Massoud’s eyes were the color of flint and possessed with the power to look right through a man. His heavy black beard was streaked with gray. He was only in his late forties, but a life of incessant combat had aged him beyond his years, giving him the appearance of a man twenty years older.

Placing his right hand over his heart in the traditional Afghan greeting, Mullah Massoud nodded slightly to his guest and said, “Salaam alaikum.”

Massoud embraced his guest and held him tightly for many moments. The blue-eyed man had learned early in his career that a hug from an Afghan man was a sign of respect. The longer the embrace, the deeper the respect you were held in.

Finally, the commander broke off the hug. “It is good to see you again, Bakht Rawan.”

Brad Thor is the #1 New York Times bestselling author of twenty-two thrillers, including Black Ice, Near Dark (one of Suspense Magazine’s Best Books of the Year), Backlash (nominated for the Barry Award for Best Thriller of the Year), Spymaster (“One of the all-time best thriller novels” —The Washington Times), The Last Patriot (nominated Best Thriller of the Year by the International Thriller Writers association), and Blowback (one of the “Top 100 Killer Thrillers of All Time” —NPR). Visit his website at BradThor.com and follow him on Facebook at Facebook.com/BradThorOfficial and on Twitter @BradThor.

Book #8 of The Scot Harvath Series
By Brad Thor
LIST PRICE $17.00
PRICE MAY VARY BY RETAILER