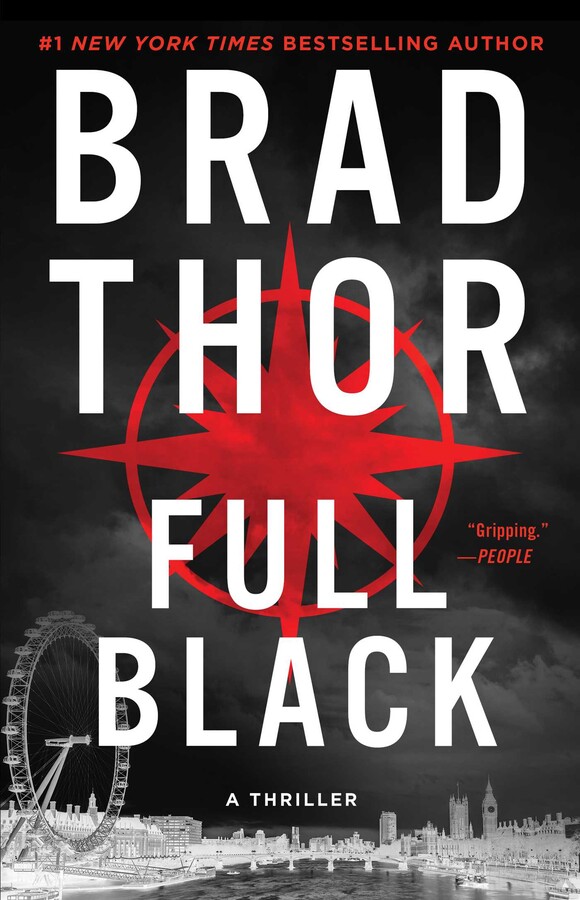 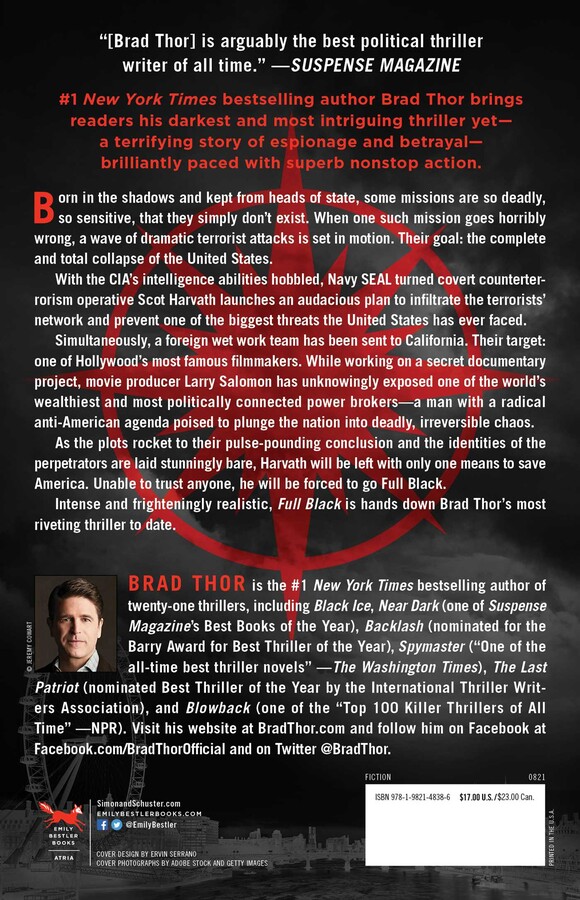 Book #10 of The Scot Harvath Series
By Brad Thor
LIST PRICE $17.00
PRICE MAY VARY BY RETAILER

Born in the shadows and kept from heads of state, there are some missions so deadly, so sensitive, that they simply don’t exist. When one such mission goes horribly wrong, a wave of dramatic terrorist attacks is set in motion. Their goal: the complete and total collapse of the United States.

With the CIA’s intelligence abilities hobbled, former Navy SEAL Team Six member turned covert counterterrorism operative Scot Harvath launches an audacious plan to infiltrate the terrorists’ network and prevent one of the biggest threats the United States has ever faced.

Simultaneously, a foreign wet work team has been sent to California. Their target: one of Hollywood’s most famous filmmakers. While working on a secret documentary project, movie producer Larry Salomon has unknowingly exposed one of the world’s wealthiest and most politically connected powerbrokers—a man with a radical anti-American agenda poised to plunge the nation into deadly, irreversible chaos.

As the plots rocket to their pulse-pounding conclusion and the identities of the perpetrators are laid stunningly bare, Harvath will be left with only one means to save America. Unable to trust anyone, he will be forced to go Full Black.

Intense and frighteningly realistic, Full Black is hands down Brad Thor’s most riveting thriller to date.

His timing had been perfect. Swerving back into the lane at the last possible second, he watched in his rearview mirror as the white Škoda behind him careened off the road and slammed into a large tree.

Applying his brakes, he pulled off the road and stepped out of his vehicle. The air smelled of spruce and spilled gasoline. The woman from the passenger side joined him. They had to move fast.

Half their work had already been done for them. The terrorist in the Škoda’s passenger seat had not been wearing his seat belt. He was already dead.

The driver was trying to unbuckle himself when Scot Harvath arrived at his window. He was cursing at him in Arabic from inside. Harvath removed a spark plug, often referred to as a ghetto glassbreaker, from his pocket and used it to smash the window.

Grasping the terrorist’s head, Harvath gave a sharp twist and broke his neck. Gently, he guided the dead driver’s chin down to his chest.

The final passenger was a young Muslim man seated in the back of the car who was screaming. As Riley Turner opened his door she could see he had wet himself. Painting his chest with the integrated laser sight of her Taser, she pulled the trigger.

The compressed nitrogen propulsion system ejected two barbed probes and embedded them in the young man’s flesh. The insulated wires leading back to the weapon delivered a crackling pulse of electricity that incapacitated his neuromuscular capability.

Yanking open the opposite door, Harvath carefully avoided the probes as he pulled the man from the vehicle and laid him on the ground. Once the man’s hands were FlexCuff’d behind his back, Harvath removed a roll of duct tape and slapped a piece over his mouth. Producing a pair of pliers, he yanked out the probes. The man winced and emitted a cry of pain from behind his gag. As he did, Harvath looked up and saw a familiar pearl-gray Opel minivan approaching.

The van pulled parallel with the crash scene and slowed to a stop. The sliding door opened and a man in his midtwenties, holding a shopping bag, stepped out into a puddle of radiator fluid and broken glass.

The young operative’s name was Sean Chase, and while he wasn’t a perfect match, he was the best they had.

Chase was the product of an American father and an Egyptian mother. His features were such that Arabs saw him as Arab and Westerners often took him for one of their own. The question was, would the members of the Uppsala cell accept him?

He was intended to be Harvath’s ultimate listening device and was going to switch places with the young Muslim from the backseat of the Škoda, Mansoor Aleem.

Mansoor and the Uppsala cell were the only link the United States had to a string of terrorist attacks that had targeted Americans in Europe and the United States. And as bloody as those attacks had been, they were supposedly nothing, compared to what intelligence reported the plotters were about to unleash.

Subbing Chase for Mansoor was the most crucial and the most dangerous part of the assignment. According to their limited intelligence, only two Uppsala cell members had ever met Mansoor before and actually knew what he looked like. The men were friends of his uncle, a terrorist commander by the name of Aazim Aleem.

The men had been dispatched to Arlanda airport in Stockholm to collect Mansoor and return him to the cell’s safe house two hours north. Thanks to Harvath, they were now both dead.

The team had had the men under surveillance since they had arrived at the airport. The driver had made only one phone call after they had picked up Mansoor and left the airport. Harvath felt confident the call had been to the cell in Uppsala confirming the pickup.

Harvath now pulled the young Muslim to his feet and pushed him up against the van. Drawing his Glock pistol, he placed it under the man’s chin and pulled the tape from over his mouth. “You saw what I did to your friends?”

While his uncle was a very, very bad guy, as were the two dead men slumped in the Škoda, Mansoor was on the cyber side of the jihad and hadn’t experienced violence or dead bodies firsthand. That didn’t mean he wasn’t just as guilty as jihadis who pulled triggers, planted bombs, or blew themselves up. He was guilty as hell. He was also a potential treasure trove of information, having run a lot of his uncle’s cyber operations. Harvath had no doubt the United States would be able to extract a ton from him. But first, he wanted to be as sure as he could be that he wasn’t sending Chase into a trap.

“We know all about the Uppsala cell,” said Harvath. “We want you to take us to them.”

Mansoor stammered, trying to find his words. “I, I can’t.”

“What do you mean, you can’t?” Harvath demanded.

Harvath jabbed the muzzle of his weapon further up into the soft tissue under the man’s chin. Mansoor’s eyes began to water. “Don’t bullshit me, Mansoor. We know everything you’re up to.”

“But I don’t know anything,” he said emphatically. “Honestly. I was just supposed to get on the plane. That’s all. That’s why they picked me up at the airport. I don’t know where they were taking me.”

Harvath studied the man’s face. He was looking for microexpressions, tells people often radiate when lying or under stress from an act they are about to commit.

As far as Harvath could surmise, the man wasn’t lying. “I want a list of all the cell members. Right now.”

“I don’t know who you’re talking about.”

“I only knew the two men in the car,” he said as his eyes drifted toward the wreck.

“You’re lying to me,” said Harvath.

“Describe the other cell members to me. Their ages, backgrounds, I want all of it.”

“I don’t know!” Mansoor insisted. “You keep asking me questions I can’t answer! The only two people I know in this entire country are dead! You killed them!”

With so little time, that was as good as Harvath was going to get. Patting Mansoor down, he located his wallet and tossed it to Chase. He then went through his pockets and removed everything else.

Chase already had a U.K. passport with his picture issued in Mansoor’s name. He also had a driving permit, ATM card, two credit cards, and a host of other pocket litter that would make him even more believable.

Chase fished through the handful of items Harvath had taken from his prisoner and pocketed a boarding pass, a London Tube card, and Mansoor’s house keys.

Opening the Škoda’s trunk, the young operator sifted through Mansoor’s suitcase and quickly studied the contents as he replaced the clothing with his own. Knowing everything the cyberjihadist had packed would give him more insight into the identity he was about to assume.

When he was done, he zipped up the case, removed it from the trunk, and closed the lid. Looking at Riley Turner, he said, “Let’s get this over with.”

Turner approached and unrolled a small surgical kit. She was in her midthirties, tall, fit, and very attractive. Her reddish-brown hair was pulled back in a ponytail. She had blue eyes and a wide, full mouth. Removing a syringe, she began to prep an anesthetic.

Chase shook his head. “I appreciate the thought, but I’ll pass on the Botox.”

“It’s your call,” she replied, gesturing for him to sit down on the backseat. “This is going to hurt, though.”

The young intelligence operative winked at her. “I can take it.”

She swept back his dark hair and abraded his forehead with a piece of sandpaper. To his credit, he sat there stoically, but that was the easy part. Next, Turner removed her scalpel. Placing it at his hairline, she dug in and cut a short, craggy line.

Chase sucked air through his clenched teeth as the blood began to flow down his forehead and into his eyes.

Turner handed him a handkerchief.

Having secured Mansoor in the van, Harvath now rejoined them. Bending down, he gathered up a handful of broken glass and handed it to Turner, who sprinkled pieces into Chase’s hair, as well as the folds of his clothing.

Harvath searched the dead men and recovered their cell phones. After cloning their SIM cards, he reassembled the driver’s phone and tossed it to Chase, saying, “Showtime.”

Brad Thor is the #1 New York Times bestselling author of twenty-two thrillers, including Black Ice, Near Dark (one of Suspense Magazine’s Best Books of the Year), Backlash (nominated for the Barry Award for Best Thriller of the Year), Spymaster (called “one of the all-time best thriller novels” by The Washington Times), The Last Patriot (nominated Best Thriller of the Year by the International Thriller Writers association), and Blowback (named one of the “Top 100 Killer Thrillers of All Time” by NPR). Visit his website at BradThor.com and follow him on Facebook at Facebook.com/BradThorOfficial and on Twitter @BradThor.

Book #10 of The Scot Harvath Series
By Brad Thor
LIST PRICE $17.00
PRICE MAY VARY BY RETAILER