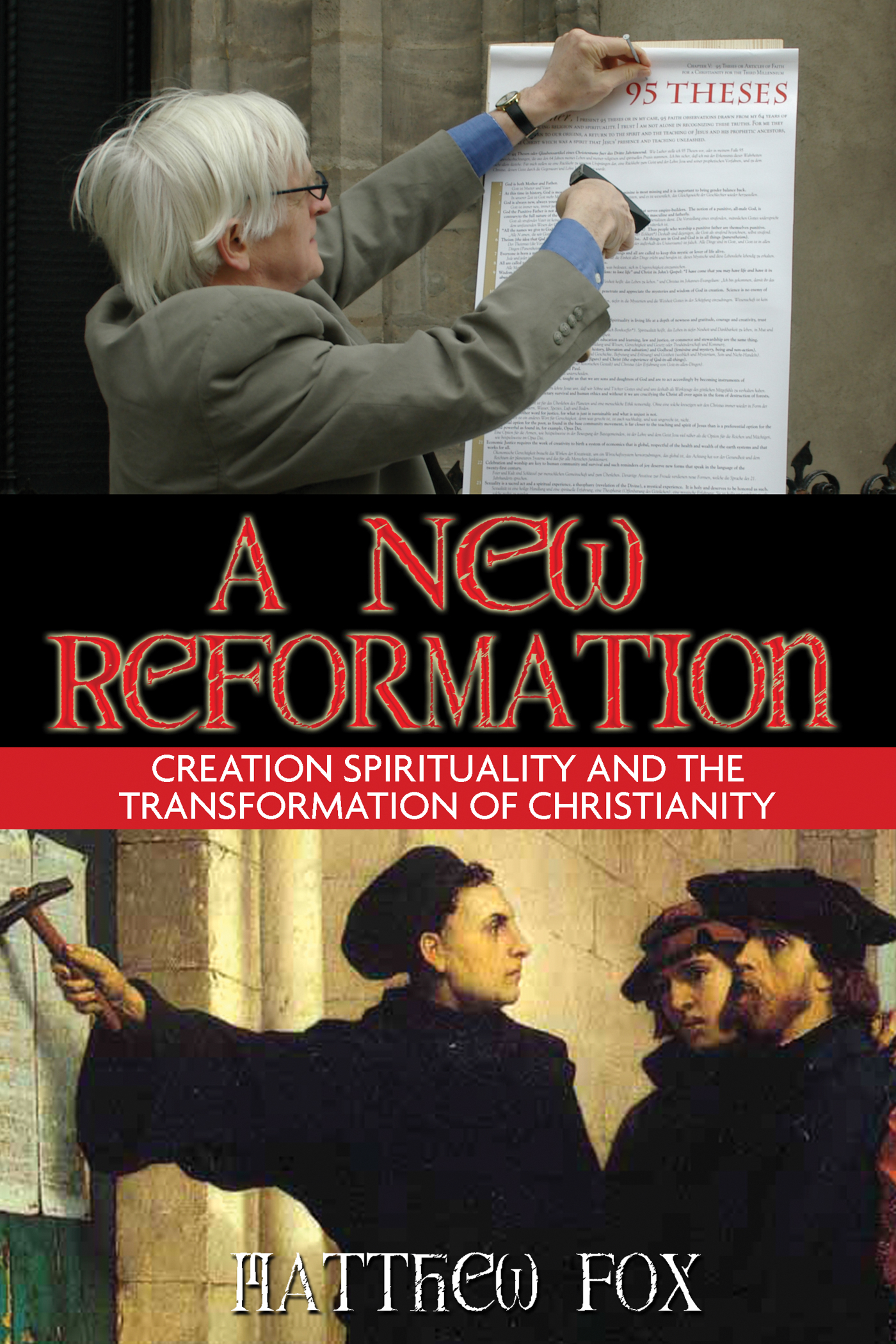 • Echoes the Reformation initiated by Martin Luther in 1517

• Offers a new vision of Christianity that values the Earth, honors the feminine, and emphasizes spiritual tolerance

In 1517, Martin Luther, disgusted at the corruption then reigning in the Catholic Church, nailed on the door of Castle Church in Wittenberg, Germany, 95 theses calling for a Reformation. During Pentecost week 2005, former Dominican priest Matthew Fox nailed at that same church door a new set of 95 theses calling for a reawakening of the Christian spirit and a repudiation of the authoritarian, punitive tendencies that prevail in modern churches today. Fox’s theses not only condemn the deep corruption in the hierarchy of the Roman Catholic Church, made evident by the pedophile scandal and the recent canonization of a fascist admirer of Hitler, but also speak to the loss of inspiration and resulting apathy that have emptied churches of all denominations.

Fox says, “At this critical time in human and planetary history, when the earth is being ravaged by the violence of war, poverty, sexism, homophobia, and eco-destruction, we need to gather those who offer a future that is one of compassion, creativity, and justice to speak their conscience as never before. Religion ought to be part of the solution, not the problem.” His 95 theses call for a New Reformation, a radical transformation that will allow us to move once again from the hollow trappings of organized religion to genuine spirituality.

3 Fundamentalists in Their Own Words

What Can We Do?

As we have seen, fundamentalism has taken over much of the Roman Catholic Church and many of the Protestant churches. What theologian Dorothy Soelle has correctly called Christo-fascism is alive and well in Western religion and in some very lofty places in American politics and government.

An alternative is possible. For this to happen, a divorce is necessary. Maybe it is time to let the fundamentalists have the church, with its buildings and museums, its debts and payouts for pedophile offenders. We who believe otherwise and are not fundamentalists will take Christ. And with this simple divorce, a new season may begin: a genuine Pentecost, a rebirth of the church for a third millennium--a church made up of people practicing spirituality, not people structuring a religion.

The ninety-five theses that follow shed light on this New Pentecost experience.

This New Pentecost will not be fundamentalist and will not be based on worship of a punitive God. It will not tolerate sexism in itself or those adhering to it. It will seek wisdom along with knowledge, a true balance that avoids 1) anti-intellectualism and anti-scientism (as evidenced in the fight against evolution and homosexuality) and 2) rationalism and living and praying in the head. It will honor all the chakras, including the second or sexual chakra, for the sacred energy that can be found in them (see the Song of Songs on this subject). It will teach meditation forms of many varieties and will empower people to be mystical activists--spiritual warriors, mystics, and prophets.

The new “church” of this New Reformation will have as little structure as possible. As occurred during the years of the early Christian church, its faithful will meet in home churches in which the focus will be praying and sharing stories--their own and those of others, including that of Jesus. At times they will gather in larger groups--perhaps once a month--to share the true celebration of the larger community, which, with its use of dance and images rather than an overabundance of readings and sermons, will take a form both post-modern and pre-modern.

Who will lead and be ordained in the church of this New Reformation? The leaders will be those who have trained in the wisdom and creation spirituality tradition (that of the historical Jesus) and who feel called to be part of the leadership of this new church.

In keeping with its theology of the priesthood of all workers, those who serve will have jobs that are not ecclesial as such. In this new church, rather than being a profession in itself or a privileged hierarchical class, the priesthood will be an avocation, an honoring of the midwifery powers of all workers, for every individual who is doing good work--that is, work that is a blessing to the community--is already a priest, a midwife of grace. The New Reformation will not be naively unaware of the powers and principalities of this world. Instead, it may take these on directly at times, for it knows that the powers that gather around a punitive Father ideology--fundamentalism and fascism--are always with us.

This new church, while looking to many spiritual traditions of the past, will trust the Spirit to lead us in new ways for the third millennium. It will understand that we must travel light, divesting ourselves of two thousand years of ecclesial and cultural baggage, for the world today is a new place.

Like Martin Luther before me, I present here ninety-five theses or faith observations. These have been drawn from my sixty-four years of living and practicing religion and spirituality.

I trust I am not alone in recognizing these truths. For me they represent a return to our origins, to the spirit and teachings of Jesus and his prophetic ancestors, and to the Christ unleashed by Jesus’ presence and teachings. These theses are an invitation to discussion and debate. Can what we know as Christianity transform itself for a new millennium and the generations to come? Can it take from its past only what is wise and move into a new age with a renewed commitment to sustainability for the earth and justice for the earth’s people?

These theses offer the possibility of discussion about not just a New Reformation, but a transformation of what we have known up to now.

95 THESES OR ARTICLES OF FAITH

4 God the Punitive Father is not a God worth honoring, but a false god and an idol that serves empire builders. The notion of a punitive, all-male God is contrary to the full nature of the Godhead, who is as much female and motherly as masculine and fatherly.

7 Everyone is born a mystic and a lover who experiences the unity of things and all are called to keep alive this mystic or lover of life.

11 Religion is not necessary but spirituality is.

13 Spirituality and religion are not the same any more than education and learning, law and justice, or commerce and stewardship are the same.

18 Eco-justice is a necessity for planetary survival and human ethics; without it we are crucifying the Christ all over again in the form of destruction of forests, waters, species, air, and soil.

22 Celebration and worship are key to human community and survival, and such reminders of joy deserve new forms that speak in the language of the twenty-fi rst century.

37 To honor the ancestors and celebrate the communion of saints does not mean putting heroes on pedestals, but rather honoring them by living out lives of imagination, courage, and compassion in our own time, culture, and historical moment, as they did in theirs.
Matthew Fox

Matthew Fox was a member of the Dominican Order in good standing for 34 years until he was expelled by former Pope Joseph Ratzinger, who was a cardinal and chief inquisitor at the time. Matthew Fox is the founder of Wisdom University (formerly the University of Creation Spirituality) and the foremost proponent of Creation Spirituality, based on the mystical teachings of early Christian visionaries such as Hildegard von Bingen, Meister Eckhart, and Saint Thomas Aquinas. He is the author of 26 books, including Original Blessing and The Coming of the Cosmic Christ. In 2019, Matthew Fox was cited as one of the "100 Most Spiritually Influential Living People in the World" according to Watkins Mind Body Spirit magazine.

“This is a deep and forceful book. . . . With prophetic insight, Matthew Fox reveals what has corrupted religion in the West and the therapy for its healing.”

“One of the great prophetic voices of our time.”

– David C. Korten, author of When Corporations Rule the World

“Insightful and profound. History will name Fox one of the great Christian spirits of our age.”

– John Shelby Spong, author of A New Christianity for a New World

"Fox bases many of his 95 theses on the ideas and ideals of Creation Spirituality which blends the wisdom of western religion with the insights of science and indigenous cultures. It salutes the power of creativity and imagination and emphasizes the calling of all to be the sons and daughters of God. It honors panentheism, women's wisdom, the contributions of gays and lesbians to global cultures, the joy of dance and celebration, eco-justice, the need to bridge the gap between the rich and the poor, and the daily practice of compassion as the best expression of spirituality."

"A New Reformation is very strongly recommended and iconoclastic reading, and to be given high praise as an outstandingly informative and quite comprehensive study of the Christian movement, especially the Catholic church, and a coherent presentation of the more progressive aspects of the Christian religion in modern times."

"The first half of the book contains compelling background and historical information explaining why we find ourselves in this current situation of cover-ups and abuses within the church. The second half of the book contains the Theses whose purpose is to provide guidelines for evolving religion in the new millennium. As Thesis #11 tells us “Religion is not necessary, but spirituality is.”"