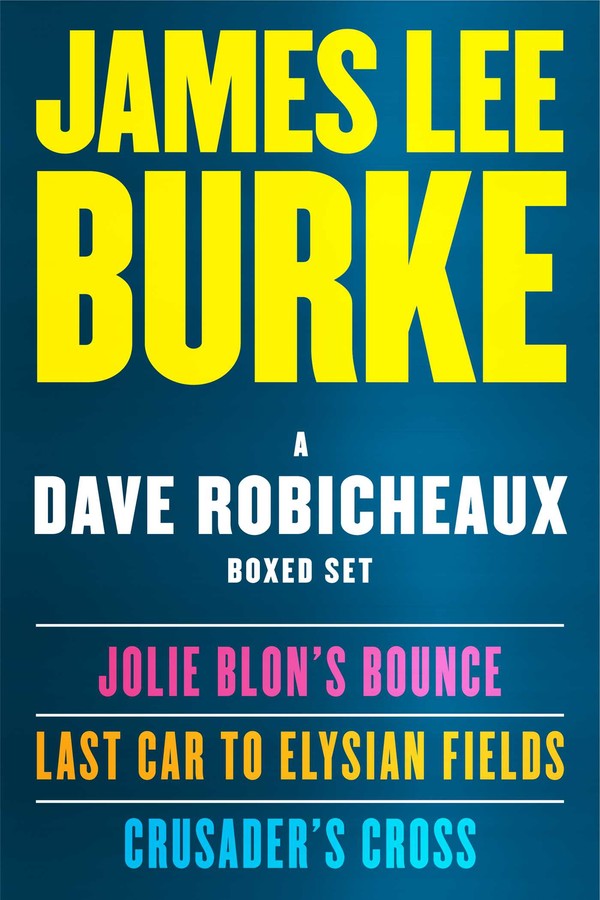 Three classic novels from the Bard of the Bayou

This boxed set includes three novels featuring fan favorite Detective Dave Robicheaux as he does battle with the forces of evil, and with his own soul, in Louisiana’s famous bayou country. New York Times bestselling author James Lee Burke is a rare winner of two Edgar Awards and in 2009 was named a Grand Master by the Mystery Writers of America.

New Iberia, Louisiana, is reeling from a one-two punch of brutal rape-homicides, and drug-addicted blues singer Tee Bobby Hulin has been tagged as the prime suspect. No stranger to bucking popular opinion, police detective Dave Robicheaux is convinced they’ve got the wrong man. But while placating a town on fire for swift revenge, Robicheaux must face his own demons in the form of Legion Guidry, a diabolical figure whose hardcore brand of violence left Robicheaux humiliated and addicted to painkillers. With his longtime friend, the boozing and womanizing Clete Purcel, Robicheaux treads among land mines of injustice, mob payoffs, and deadly secrets, all the while guessing: whom can he trust—and whom should he fear?

For Dave Robicheaux, there is no easy passage home. When an old friend, Father Jimmie Dolan, is brutally attacked in New Orleans, Robicheaux knows he has to return there to investigate, visiting old ghosts and exposing old wounds. The trouble continues when Father Jimmie asks Robicheaux to help investigate the presence of a toxic landfill near St. James Parish, which in turn leads to a search for the truth behind the disappearance many years before of a legendary blues musician and composer. Trying to connect these seemingly disparate threads of crime, Robicheaux finds himself drawn into a web of sordid secrets and escalating violence that sends echoes down the lonely corridors of his own unresolved past.

Time and suffering have taught Detective Dave Robicheaux that memories—including those of a strange and violent summer from his youth—are best left alone. But a dying man's confession forces Robicheaux to raise new questions about a decades-old mystery with a missing woman at its heart. Her name may or may not have been Ida Durbin, and Robicheaux's half brother, Jimmie, paid a brutal price for entering her world. Resurrecting the truth about the mysterious Miss Durbin will plunge Robicheaux into the insidious machinations of New Orleans' wealthiest family, into a complex love affair of his own, and into hot pursuit of a ruthless killer expanding his territory beyond the Big Easy at a frightening pace.