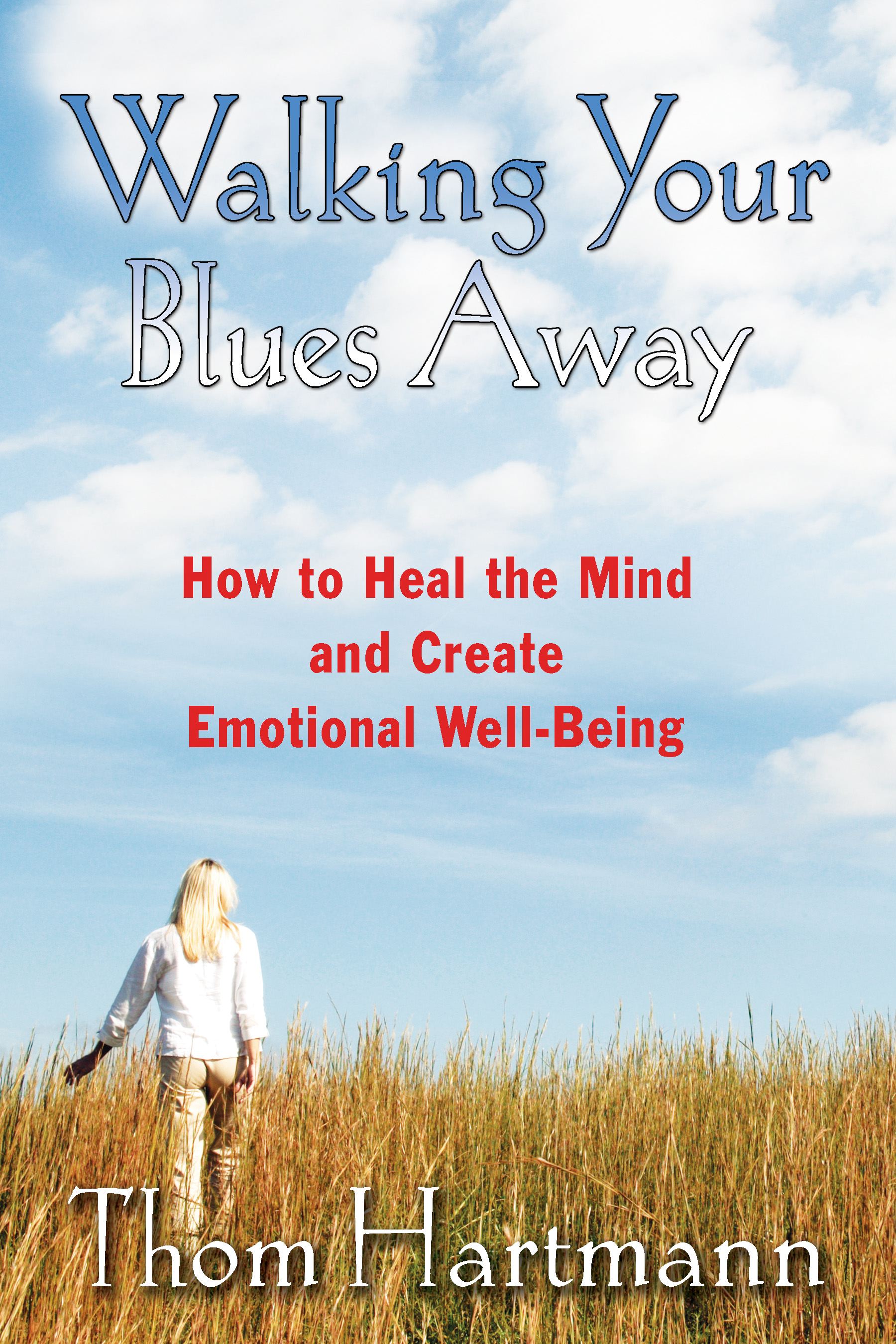 Walking Your Blues Away

How to Heal the Mind and Create Emotional Well-Being

By Thom Hartmann
LIST PRICE $12.95
PRICE MAY VARY BY RETAILER

• Explores why and how we carry emotional wounds, and how they can be healed and resolved

• Provides simple, yet potent, mental exercises to use while walking

Our bodies usually heal rapidly from an illness, injury, or wound. Yet our minds and hearts often suffer for years with debilitating symptoms of distress or upset. Why is it so hard for our minds and hearts to heal? The key to healing them is simple and can be just a short walk away.

Walking--a bilateral therapy that has been a part of human life throughout history--allows people to heal emotionally as quickly as they do physically. Bilateral therapies engage both sides of the brain and unlock natural states of optimal function and creativity. Thom Hartmann examines how memory works and why emotional shock can resist normal healing. He found that the simple act of walking is effective in treating emotional disturbances ranging from temporary upsets and problems to chronic conditions such as post-traumatic stress disorder and depression.

Case studies have shown dramatic results. Walking consciously, while holding a distress or desire in mind, can rapidly dissolve the rigidity of a traumatic memory or negative mind state, dispersing its unpleasant associations in as little as a half hour’s time. While walking has always been a natural part of life, its importance in promoting and maintaining mental health is only recently being rediscovered. Hartmann’s simple yet potent exercises allow us to create our own walking journeys to restore our mental, emotional, and spiritual well-being as well as rejuvenate our body’s health.

NLP and the Modern History of Bilateral Therapies

I told Ralph that the way this technique worked, the therapist would first ask the client where they held the picture of their trauma. Ralph said that his was right in front of him, about two feet away, in a square area that roughly encompassed his chest, and he started to tremble and tears came to his eyes as he pointed at it. I told him and the group that it had been my experience that most people with PTSD held their traumatic memories in roughly the same place, and when memories were elsewhere they were usually not the source of true PTSD symptoms. I then told Ralph that to do Eye Motion Therapy a therapist would not have the client look in the direction of the traumatic picture, but would instead direct his eyes everywhere else. As he looked away from that spot, he regained his composure.

Ralph sat opposite me, facing me directly, our knees about six inches from each other. I held up a felt marker pen just above his eye level and told him that with EMT the therapist would ask the client to hold his head steady and just follow the tip of the pen with his eyes. I suggested that he consider the intensity of the emotion he was experiencing right now as 100 on a scale of 0 to 100, and we’d check it again as we went along. Then I began moving the pen around in regular, rhythmic patterns, from side to side, going just to the edge of his field of vision across the top of his field of vision, sort of like I was wiping a blackboard at that height. I continued this for about two minutes, then stopped.

“What’s the intensity of the emotion now?” I asked.

Ralph glanced down and said, “Around 80 percent.”

“Fine,” I said, and repeated the process, this time moving through the center of his visual field as well as above it, but always being careful not to move the pen into the area where he said the painful picture was located. After another two or three minutes of having his eyes follow the pen from side to side again, I stopped and asked how he was doing.

We repeated the process again, and this time he said it went to about 40 percent.

One of the keys to doing EMT and avoiding abreactions is to not enter the picture until the intensity is below 50 percent, so when he reported it was at 40 percent, I again moved the pen from side to side but this time did it across his entire visual field, from top to bottom to top, as if I were thoroughly washing a blackboard. Whenever I noticed his eyes tic--seize up for a moment and interrupt the smooth flow of motion following the pen--I’d revisit that area a few times until his eye motions were smooth there. After about two minutes of this, he took a deep breath as his eyes were following the pen, let it out, and began to grin broadly, then chuckled under his breath.

I stopped the pen and said, “What’s up?”

He looked at me with an expression of mixed amusement and astonishment. “I can’t believe what a dummy I’ve been all these years,” he said.

“I should have just let that go and gotten on with my life. Instead, I’ve wasted more than thirty years.”

“Are we talking about the event that was bringing you to tears fifteen minutes ago?” I said.

“We sure are,” he said. “I was with a medivac unit in Vietnam, and after a really nasty firefight I called in two choppers to carry out the wounded. I was pretty sure all the enemy were dead, so after the choppers were loaded, I signaled them to take off. They got about two hundred feet up into the air and two rockets came out of the jungle and exploded them both, raining down helicopter parts and bodies on those of us on the ground.” He shook his head with an expression of regret, although his tone was matter-of-fact. “I blamed myself for their deaths, and every day since that day in 1970 I’ve seen those choppers explode and heard those men screaming as they fell out of the sky.”

He lifted his shoulders and dropped them. “I still remember it. But while you were doing that last pass there with the pen, suddenly it seemed like the pictures flattened out and took on the quality of an old newsreel. And I heard my own voice in my head say to me, ‘You did what you thought was right at the time. It was a mistake, but you did it with good intentions. You wanted to get those men to medical care, and you saved a lot of other lives while you were in that war. And now it’s over and done with, there’s nothing you can do about it, and it’s time to forgive yourself and get on with your life. If nothing else, that’s what the guys who died would want you to do, because it’s what you would have wanted them to do if the situation had been reversed.’”

“And what’s the intensity of the emotion right now?” I said.

He shrugged again. “Close to zero. I mean, damn, it’s been thirty years. It’s over and done with.”

It’s been several years since Ralph participated in that teaching demonstration, and Stephen tells me that he’s doing well in his life, has a job, and is no longer tortured by his past. He’s cured of his PTSD.
Thom Hartmann

“This book is a prescription for mental wellness that has no bad side effects. Walking, like drawing, is a human activity that calms the brain and induces insight. . . . Buy several copies--you’ll be handing this book out to friends.”

– Betty Edwards, author of Drawing on the Right Side of the Brain

“In presenting respectable research and scholarship on how the mundane-seeming, everyday activity of walking balances the brain’s laterality, Thom Hartmann brings a scholar’s concentration to his subject, a storyteller’s sense of enchantment, and a humanitarian’s concern with the issues that matter.”

– Stephen Larsen, author of The Healing Power of Neurofeedback

“Thom Hartmann’s work with bilateral movement is a fascinating and important contribution to holistic healing modalities and a timely tool for healing many crises of our modern times.”

Walking Your Blues Away

How to Heal the Mind and Create Emotional Well-Being

By Thom Hartmann
LIST PRICE $12.95
PRICE MAY VARY BY RETAILER