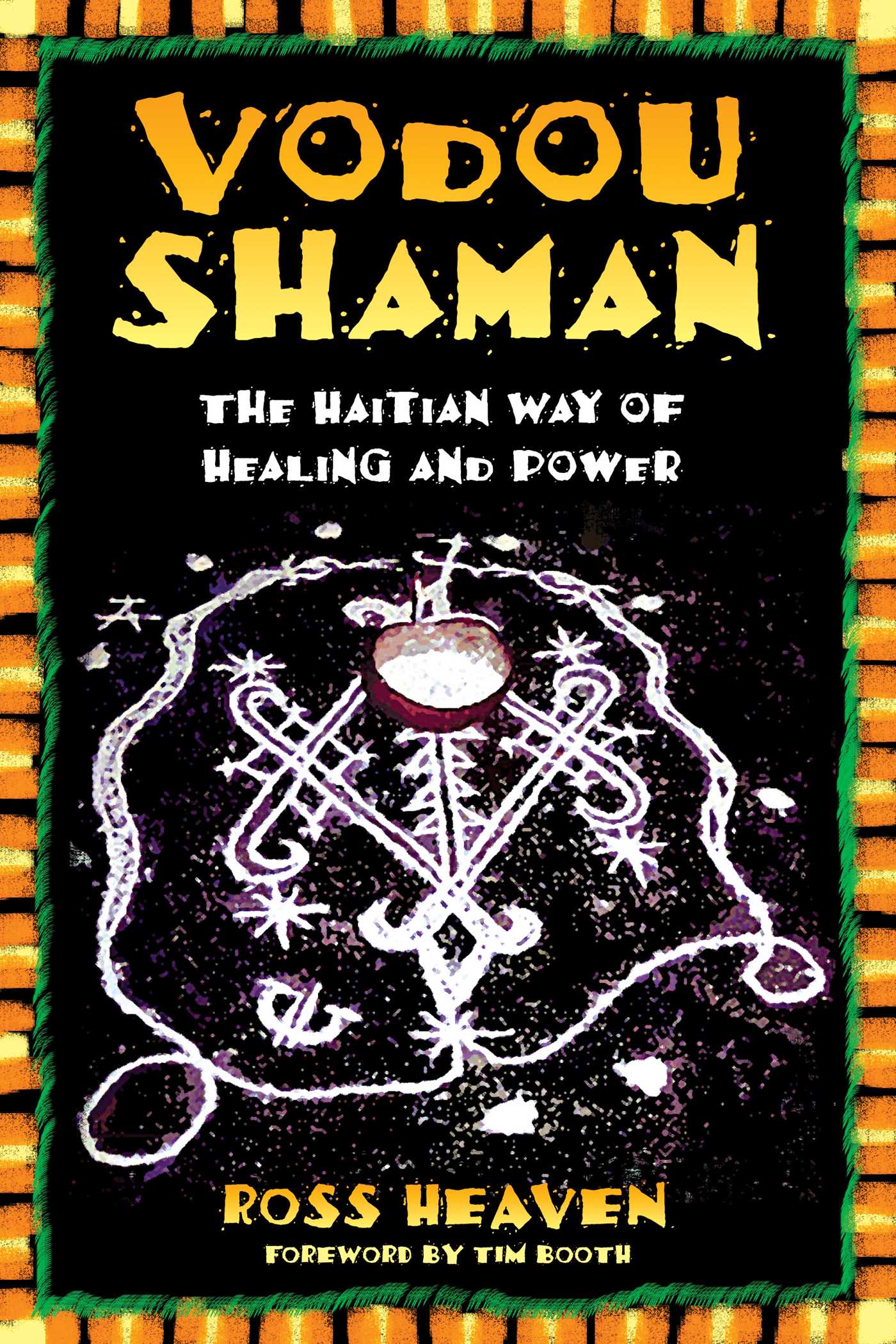 Providing practical exercises drawn from all aspects and stages of the Vodou tradition, Vodou Shaman shows readers how to contact the spirit world and communicate with the loa (the angel-like inhabitants of the Other World), the ghede (the spirits of the ancestors), and djabs (nature spirits for healing purposes). The author examines soul journeying and warrior-path work in the Vodou tradition and looks at the psychological principles that make them effective. The book also includes exercises to protect the spiritual self by empowering the soul, with techniques of soul retrieval, removing evil spirits and negative energies, overcoming curses, and using the powers of herbs and magical baths.

THE QUEST FOR POWER:
Becoming Bon Houngan
Djab O!
Djab-la nan baye-a
Djab O!
Gen de pawol m ta pale ave yo…
Spirit, oh!
The spirits are at the gate
Spirit, oh!
There is something I would say to them…

VODOU SONG CALLING THE SPIRITS
There is a different quality to night in Haiti. Without streetlights to dazzle the darkness, no blare of radios and TVs, or streets full of houses, there is a silence and deep, womb-like darkness that is like stepping into another world. A short walk takes you into the primal landscape that our ancestors knew. They must have looked up at these stars, too, vast and bright and infinite, in their time as human beings, and marveled at the mystery there. . . .

The Houngan waits for respectful silence, then arranges a chair over the vever for Ayizan. A group of white-dressed priests and priestesses line up before it as a huge freshly-cut Royal Palm frond is carried in, the carrier circling, ever-more crazily, around the peristyle in increasingly erratic steps, dancing and whirling to the screams of the crowd which grow in intensity, until eventually the palm-carrier is wild-eyed and distant. “She has loa!” the Mambos whisper. The palm-carrier is grabbed by three strong men who can handle her new-found Power, and transplanted to the djevo, the sacred heart of this new church, where the blessings of the goddess Ayizan will later be coaxed from her. At the moment, it is all they can do to close the door against her will to dance.

The Houngan hands the palm to his attendants and they begin to shred it with machetes, cutting it ever-more finely until it becomes wisps of palm leaf laid across the chair, and wrapped in a white sheet. The frond itself becomes the loa Ayizan, who is therefore still present among us.

There is a piercing scream from a young girl of seventeen or eighteen, who has thrown herself to the ground in a violent fit, her eyes rolling back in their sockets, her arms and legs jerking erratically. The electricity coursing through her limbs seems to run together within her somewhere near her chest and, with that, she is shocked so violently that her body shakes with one massive all-over convulsion and she explodes free of the ground. She begins to dance, some wild Congo dance with the elegance of ballet. She is a brilliant light spinning like a Katherine Wheel through the darkness of the peristyle.

When people are possessed of spirit, there is an energy about them which is palpable and can be transferred through touch--we have a distant memory of this in the Christian healing practice of ‘laying on of hands.’ So it is with this young girl; everyone she touches is also touched by spirit and soon the room is alive with the dead souls of Africa dancing their ecstasy through the bodies of their followers.

Suddenly, the spirit of the mighty loa, Gran Bwa, takes hold of the Houngan who owns this peristyle. Gran Bwa is the great healer of the Vodou pantheon, associated with the Power of Nature and the forests. His movements tonight are so charged with energy that he seems to be flying as he spins around the room, leaping some four or five feet into the air, before coming to a stand still in front of the drums, which quickly pass into silence. He stands like a wild animal, in a half-crouch, as if ready to pounce, with arms on hips in a posture that signifies control and authority. He is swaying like the serpent of a snake charmer. If I have ever doubted the existence of the spirits as separate entities with their own identity, the look on this possessed Houngan’s face has cured me of that forever. This is a strong and furious loa, who must be placated quickly. The people are silent, awe-struck. Even the invited Mambos and Houngans seem concerned at this appearance. “Merde” -- “Shit” --someone behind me mutters, not very comfortingly.

No one wants to approach this Gran Bwa, but they know that they must or who knows what might happen. So slowly, cautiously, laplas, the Houngan who is second in command, moves towards the possessed body of his religious leader. He lifts him up, helps him stand upright, then ties a blue scarf around his arm to signify his possession. He hands Gran Bwa a machete, a symbol of his office, feeds him rum and lights a cigar for him. I am struck by the trust of these people in their spirits; even though this Gran Bwa looks wild, he must be given the machete and fed with rum; that is the way of this spirit and his will must be done. . . .

There is a legend that Gran Bwa was once struck by lightening as a punishment for some crime, and his face was so distorted and disfigured that his mouth is now pushed to one side. When he drinks through his ear, Gran Bwa is actually drinking through his disfigured mouth and, during possession, the Houngan’s body changes physically so that his ear is transformed into a new mouth that can swallow the liquid offered to it. Now that Gran Bwa has been pacified and honoured by the people, he is ready to bestow favours. He pushes the machete deep into his arm to demonstrate that he has Power, that he cannot be hurt by weapons, that he is ready to heal the people. There is no blood.
--Haitian Journals, January 2000

THE ABYSMAL WATERS--THE LOWER WORLD
The lower world, at the bottom of the circle, represents the abysmal waters that circulate beneath the Earth. It is to this place that the dead go at the moment when they leave the mortal world to become ancestral spirits. According to Vodou tradition, most spirits who enter the lower world do not become loa. Most will become ancestral spirits . . .
Ross Heaven

Ross Heaven (1960-2018) was a psychologist and healer with extensive training in the shamanic, transpersonal, and psychospiritual traditions. The author of more than 10 books, including Plant Spirit Shamanism, Vodou Shaman, and Darkness Visible, he taught workshops on plant medicines and coordinated trips to Peru to work with indigenous shamans.

"Here he outlines the tradition's core beliefs and highlights the striking similarities between Vodou and other traditional healing arts."

"This stands out as one of the most articulated well-intentioned Vodou guidebooks available."

"A groundbreaking book that will contribute to the knowledge, diversity, and healing in this world. Ross Heaven writes with heart and wisdom about a true return to the spirit."

"It is so often in the places we least expect it, that we find the deepest spirituality. Vodou, the least well known, most feared and even most ridiculed form of shamanism, is one of those places. In this must-read book we find a pragmatic way of being in spirit; one desperately needed as we face the challenge of living in this time of great change."

"Ross Heaven does for Vodou what Castaneda did for shamanism. With so many sacred ways and cultures dying out, it is wonderful that one of the world's oldest oral traditions is recorded here by an authentic wisdomkeeper."

“Ross Heaven is a modern sage. In his book Vodou Shaman we not only learn about Vodou and experience its powers firsthand, we also pass through portals to higher levels of consciousness.”

– John Perkins, author of The Spirit of the Shuar

“Vodou is a very beautiful and practical spiritual approach to experiencing the power of other worlds. Through Vodou Shaman ordinary people will discover how to empower themselves in the most extraordinary ways.”

– Howard G. Charing, director of the Eagles Wing Centre for Contemporary Shamanism and author of Medic

"The experience of Vodou is one of joy, dance, drums, and song. It is an experience that enables all of us to connect with our spirits and the infinite power of the universe. This practical book is a valuable guide to how we can all achieve joy in our lives."

– Amoda, author of Moving into Ecstacy

"I am delighted to offer my support for this book, which is in the tradition of Maya Deren and Claude Planson, Caucasians who have discovered infinity in the African spirituality. Ross Heaven is enriching our understanding of the psyche and wisdom of humanity by going into the primeval source of our worldview."