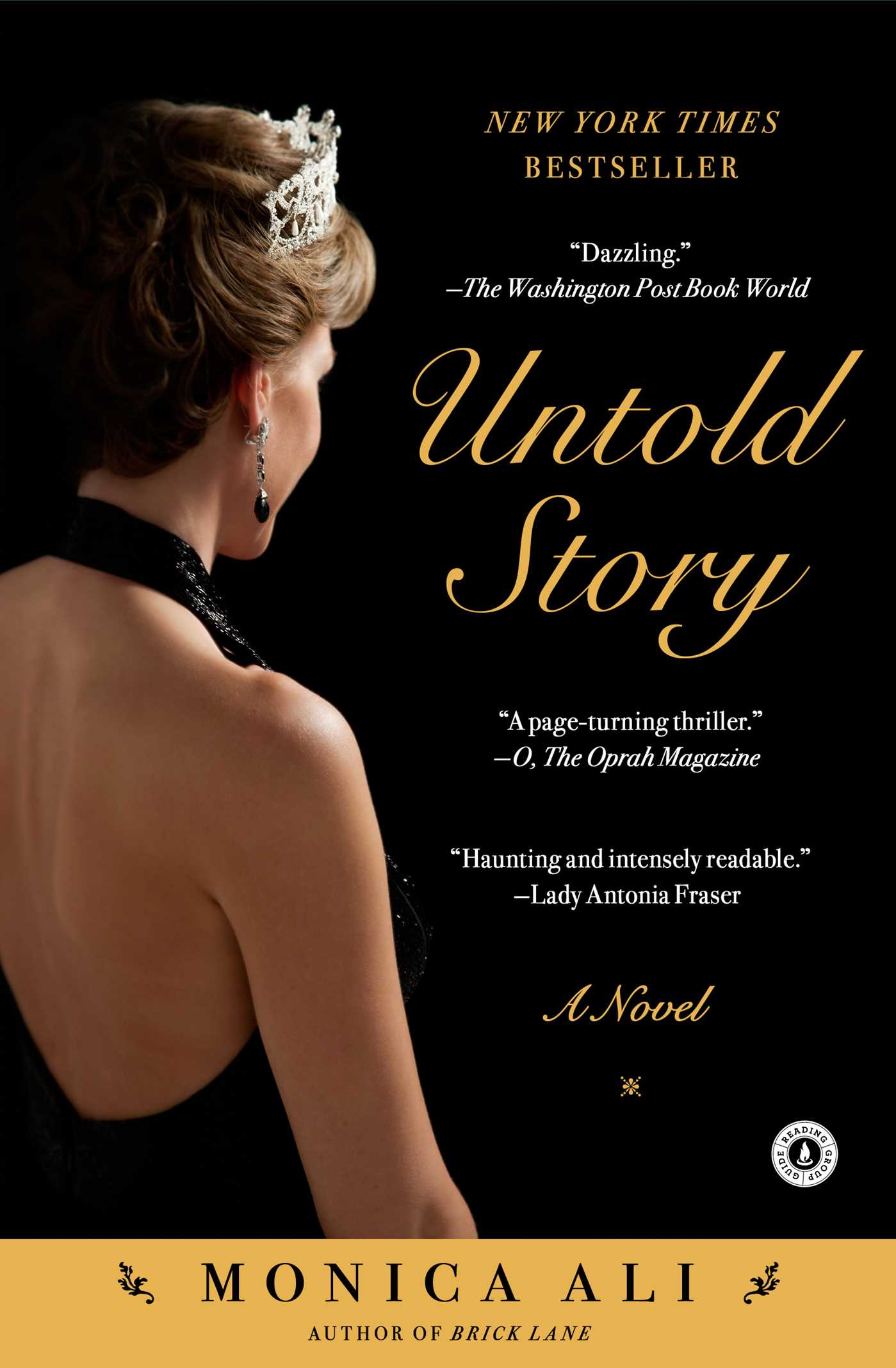 By Monica Ali
LIST PRICE $10.99
PRICE MAY VARY BY RETAILER

The New York Times bestseller from one of the most versatile and bold writers of our time—“an astonishing, tightly structured, and lyrically told” novel (People) inspired by Princess Diana.

What if Princess Diana hadn’t died? Diana’s life and marriage were fairy tale and nightmare rolled into one. Adored by millions, in her personal life she suffered rejection, heartbreak, and betrayal. Surrounded by glamour and glitz and the constant attention of the press, she fought to carve a meaningful role for herself in helping the needy and dispossessed. Had she lived, what direction would her life have taken? How would she have matured into her forties and beyond?

Untold Story is about the nature of celebrity, the meaning of identity, and finding one’s place in the world. Like Diana, the fictional heroine of this novel is both icon and iconoclast. She touches many millions of lives and hearts around the world, sharing the details of her troubled marriage and her eating disorder, and reaching out as has no other royal before her. But she is troubled and on the brink of disaster. Will she ever find peace and happiness, or will the curse of fame be too great?

By clicking 'Sign me up' I acknowledge that I have read and agree to the privacy policy and terms of use. Free ebook offer available to NEW US subscribers only. Offer redeemable at Simon & Schuster's ebook fulfillment partner. Must redeem within 90 days. See full terms and conditions and this month's choices.
This reading group guide for Untold Story includes discussion questions, ideas for enhancing your book club, and a Q&A with author Monica Ali. The suggested questions are intended to help your reading group find new and interesting angles and topics for your discussion. We hope that these ideas will enrich your conversation and increase your enjoyment of the book.

A Conversation with Monica Ali

Why did you choose to write a novel inspired by Princess Diana?

Like all British women of my generation I grew up with Diana in the background. I was thirteen when I watched her wedding to Prince Charles. I followed her evolution over the years into a global superstar. She was a lightening rod for so many different issues. Her appeal was extraordinarily wide, and you could see that in the crowds that gathered after her death—young and old, male and female, gay and straight, every color, every race, every creed. Some people didn’t like her at all, and accused her of being manipulative, of bringing her troubles on herself. To those people she will always be the patron saint of the self-obsessed.

I didn’t see her that way. The more I read about her, the more I admired her. When she got engaged she was nineteen years old, a virgin, uneducated, intellectually and emotionally insecure, with a troubled family background and eating disorders. She was supposed to be like a lamb to the slaughter. She was meant to put up and shut up about everything. But she turned out to be tougher than anyone had imagined possible. She didn’t just curl up and die; she took her own suffering and used it to reach out to others. People responded to that. She could be headstrong and reckless at times, and she certainly didn’t follow the rules. I liked that about her.

Explain what you mean when you call Untold Story a “fairy tale.”

It is a fairy tale, as it says at the beginning of the book! My initial idea had been for a short story—what if Diana hadn’t died, what would she have been like in her 40s? But when I started reading up about her in earnest I honed in on one particular aspect—the fantasy Diana had of living an ordinary life. For her that could never have been anything more than an idle dream. But what I decided to do was to write about a fictional princess, Lydia, who does leave fame and fortune behind and go off to live this ordinary life. It stands the traditional fairy tale on its head. An Unhappy Princess who turns into a more contented Cinderella.

What drew you to set the novel in Midwestern America?

Partly I took my cue from Diana’s fantasies. She talked of moving abroad as a possible way of escaping some of the circus that surrounded her. She always felt welcome in the States, and viewed the country (incorrectly), as somewhere there was no Establishment—having aroused the disapproval of the British Establishment. She also felt that America was a country that could somehow ‘absorb’ celebrity the size of hers.

So that was the germ of the idea, to set the novel in the States. But of course my fictional princess, Lydia, goes there under an entirely different set of circumstances. She’s living in America incognito. I chose the Midwest as Lydia needed to be away from the more cosmopolitan areas on either coast that she had known in her previous life. It also seemed in keeping with the central idea of the book—to give her a life that was ordinary, and to pose the question: what is actually important in life?

To some, Untold Story might seem like a major departure from your first two novels, Brick Lane and In the Kitchen, in which immigrant life in London figures heavily. Was writing Untold Story a different kind of project than your previous work?

Brick Lane was set in the Bangladeshi community in London, my second book, Alentejo Blue was set in a Portuguese village, my third, In the Kitchen is about an English chef from the north of England. They’re all very different from each other and Untold Story is different again. Although I think what they perhaps share in common is a preoccupation with identity. For example, in In the Kitchen, the chef, Gabriel, is metaphorically and then literally stripped of his identity as his world falls apart. In Untold Story, Lydia not only has to construct a new façade of her identity, she also has to construct a new sense of self beneath that façade.

What’s important to me as a writer is to write about what interests me and to keep stretching myself as well. Untold Story has a thriller element that I hadn’t written before, and I enjoyed the challenge of that.


Do you think real-life paparazzi are as morally conflicted as Grabowski? Why did you choose to make a photographer figure so centrally in the novel?

Grabowski draws a distinction between himself and the new breed of paparazzi. He came up in the old Fleet Street tradition and he thinks of himself as having some standards. He laments how those standards have now fallen away.

There’s a cat and mouse game between Grabowski and Lydia that is central to the book’s plot. But in a way what was more important to me, is the notion of complicity. Grabowski is a (lapsed) Catholic. I guess he carries our collective guilt, for the way that we (nearly all of us) suck up the details of celebrities’ private lives.

Many girls grow up with the fantasy of becoming a princess. Lydia, as princess, has the opposite dream—of becoming average, living a normal life. Was that an irony that appealed to you?

I think this comes back to fairy tales. Marrying a prince—we know, because Diana showed us—is no guarantee of happiness.

We have material comforts in abundance. We no longer need carriages and glass slippers. Neither do we really believe any more in the benign transformative power of great wealth and fame (rather the reverse).

The modern Cinderella with her fast, complex life wants the simple things: independence, freedom, friends she can trust and a good man to love.  That’s what I wanted to explore. 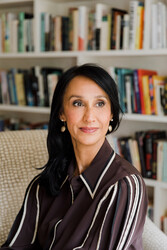 Monica Ali was born in Dhaka, Bangladesh, and grew up in England. She was named one of the 20 best young British novelists under 40 by Granta. She is the author of four previous novels, including Untold Story and Brick Lane, which was shortlisted for the Booker Prize and the Guardian Book Prize, nominated for the National Book Critics Circle Award and the Los Angeles Times Book Prize, and was named a winner of the 2003 Discover Award for Fiction and a New York Times Editors’ Choice Book that same year. She lives in London with her husband and two children.

By Monica Ali
LIST PRICE $10.99
PRICE MAY VARY BY RETAILER