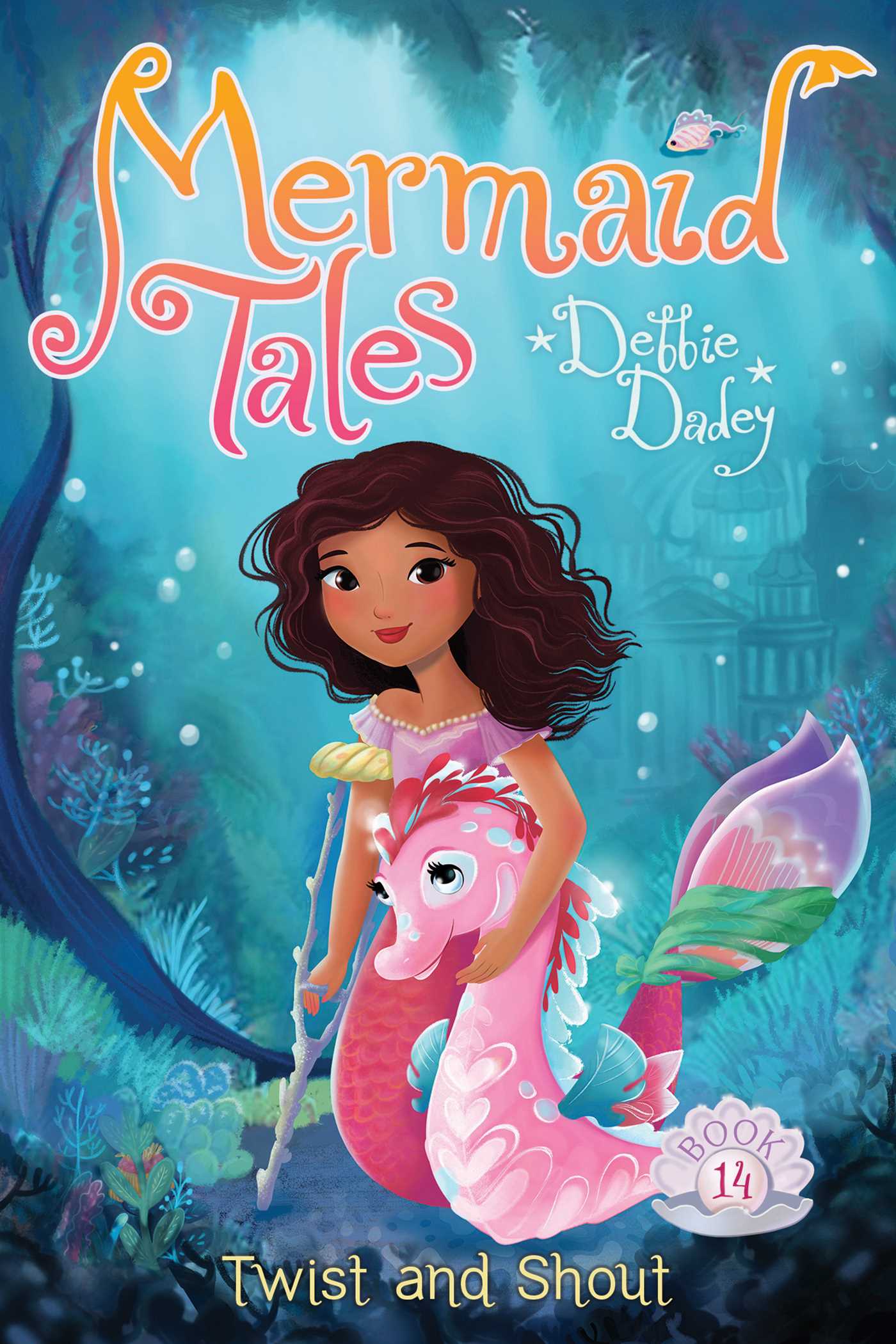 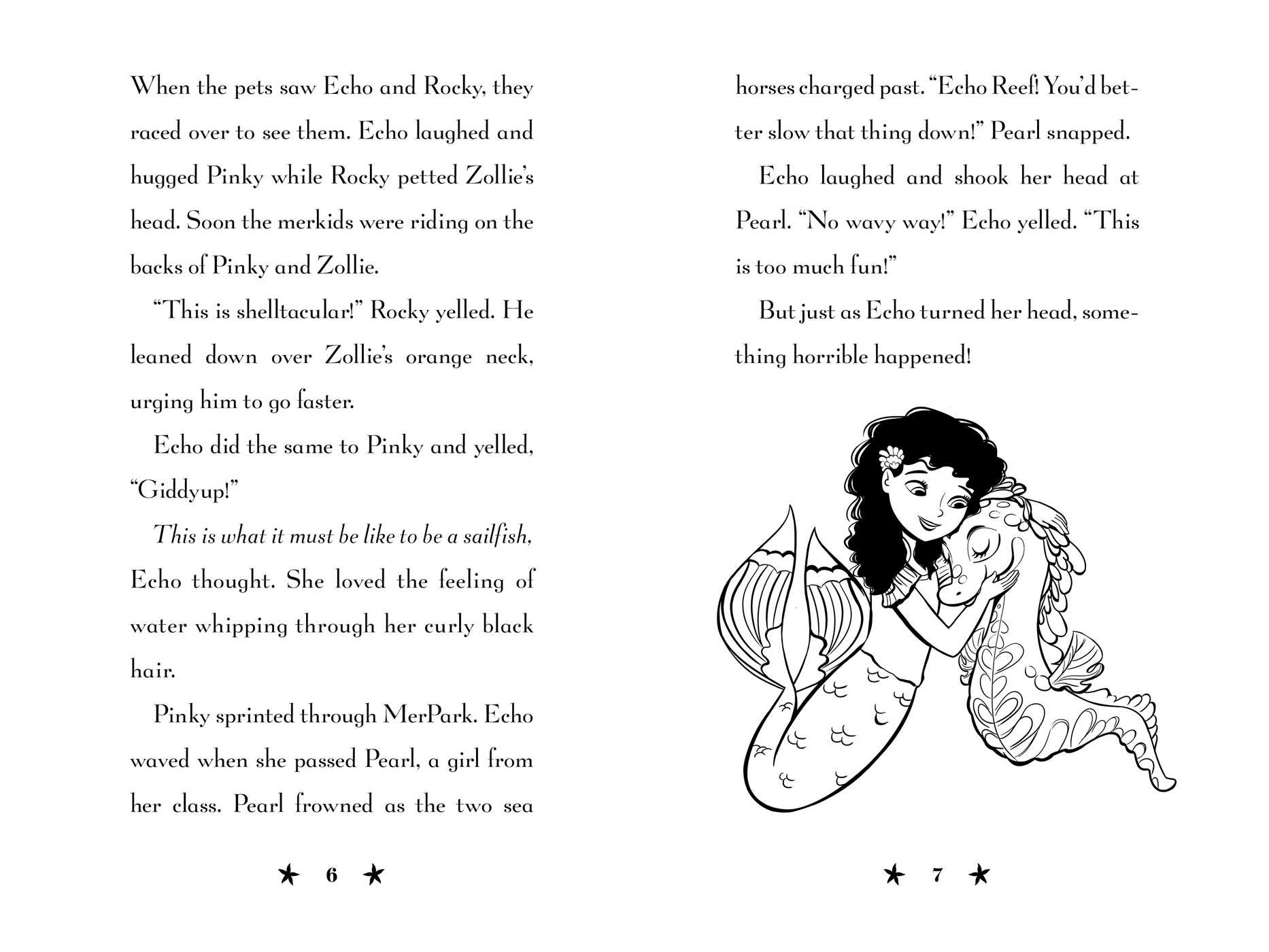 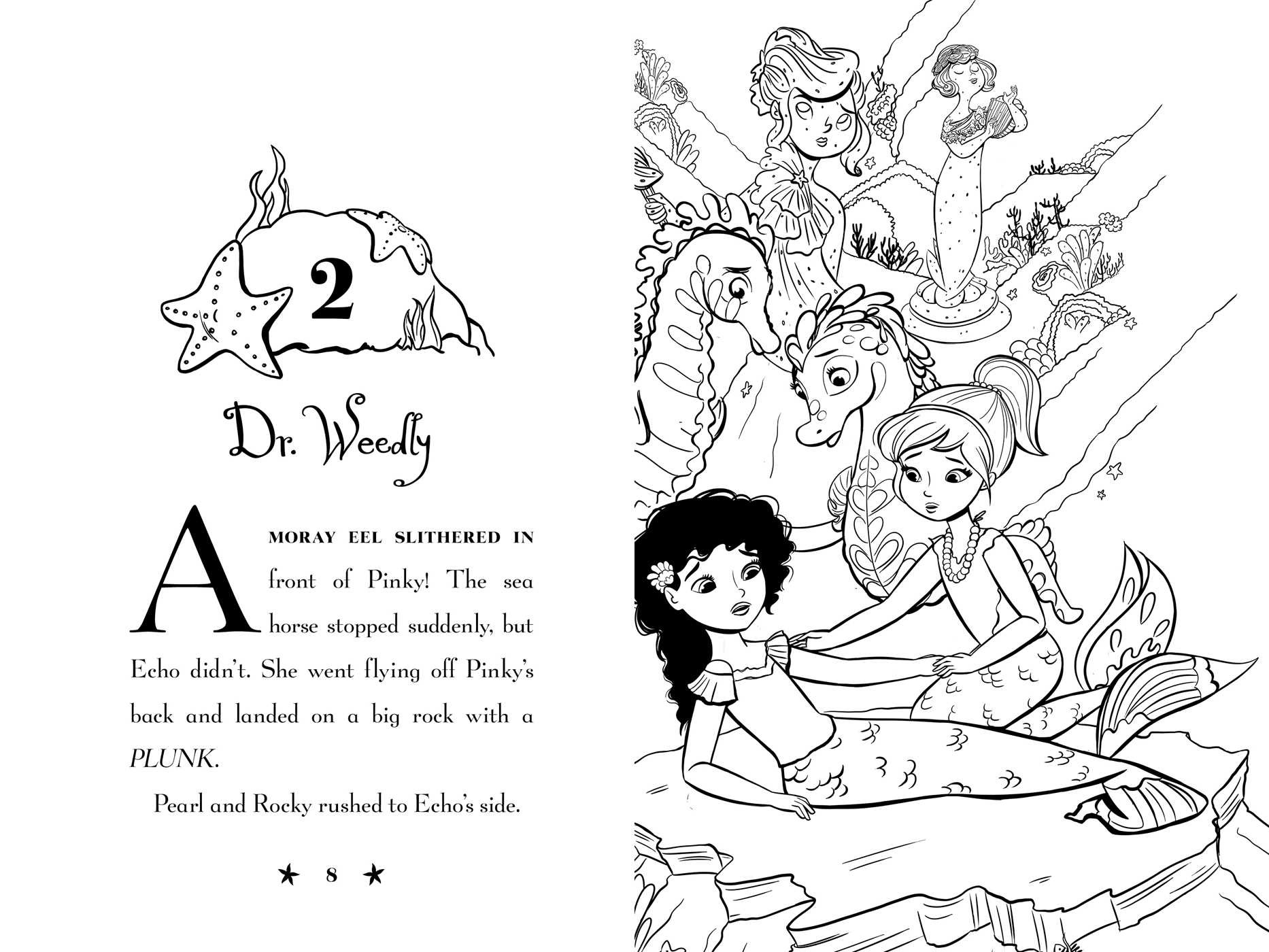 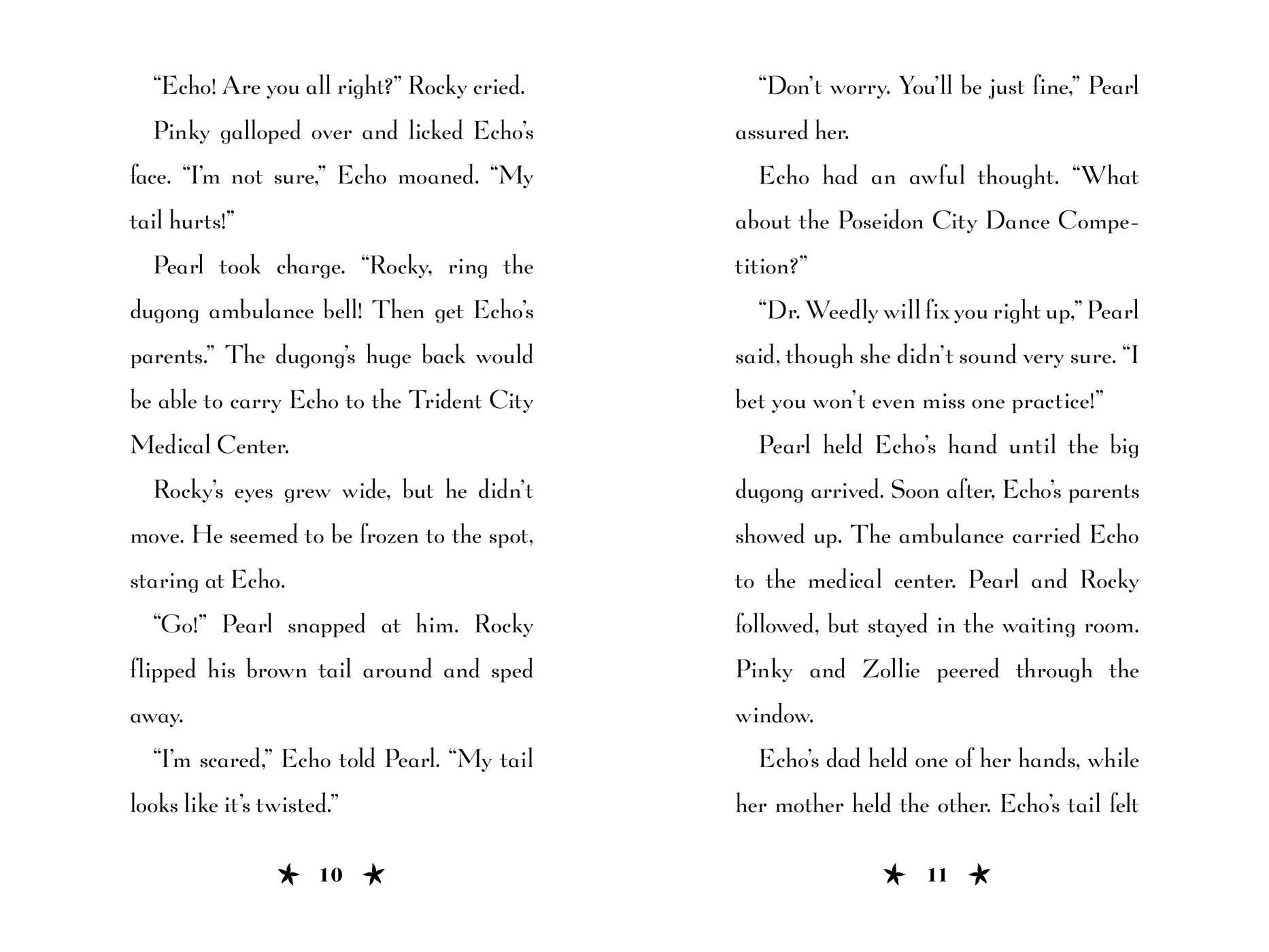 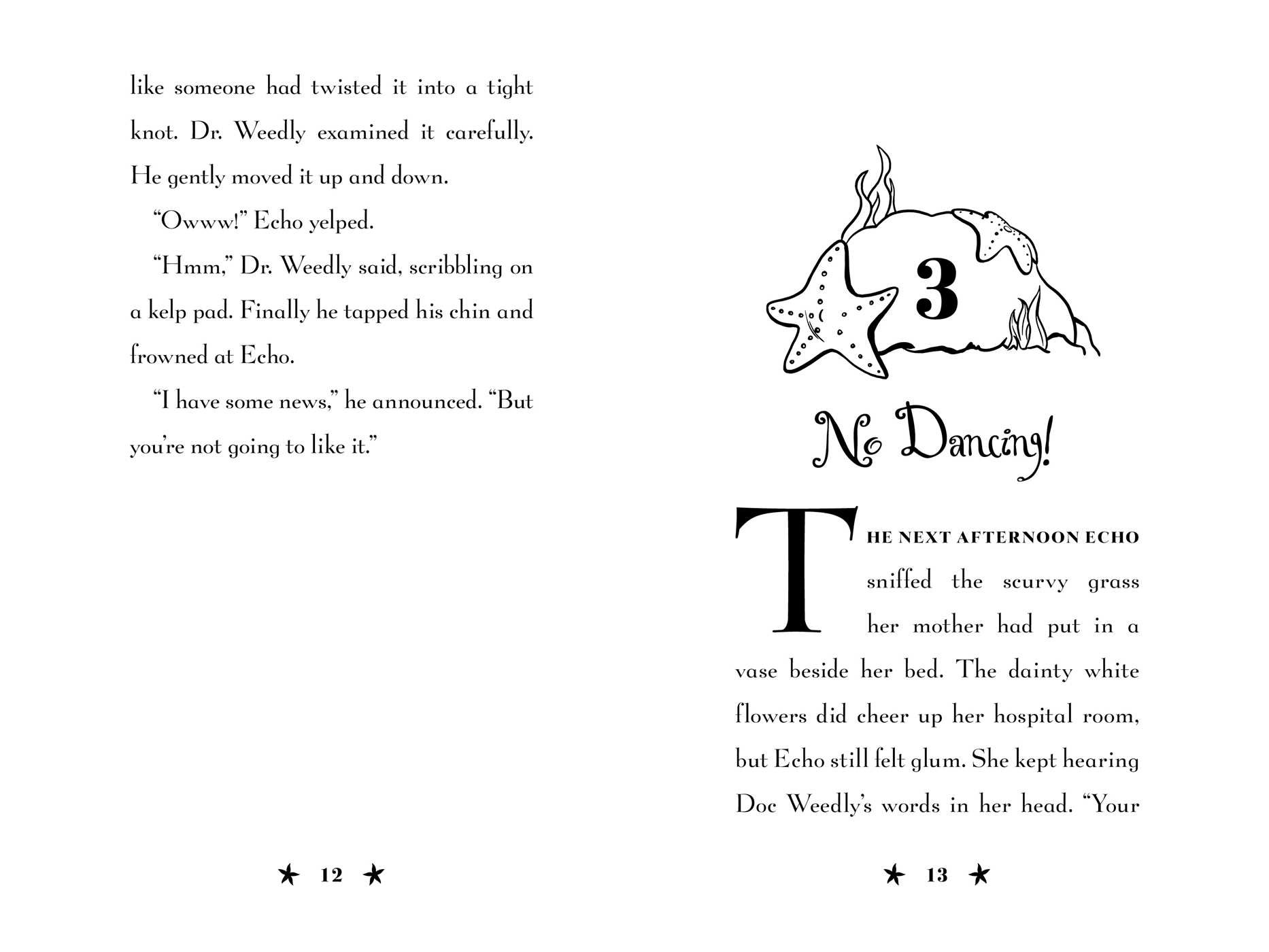 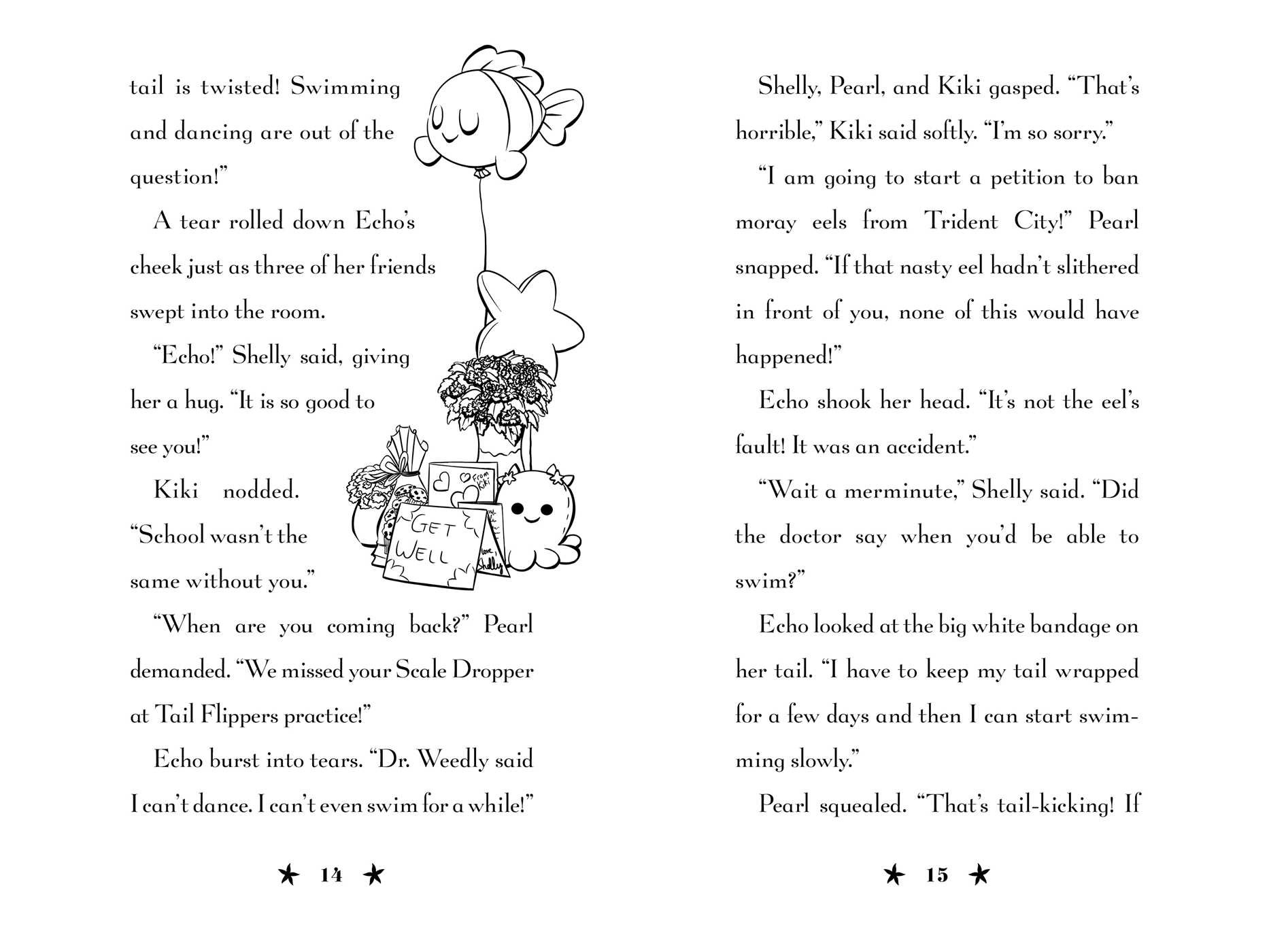 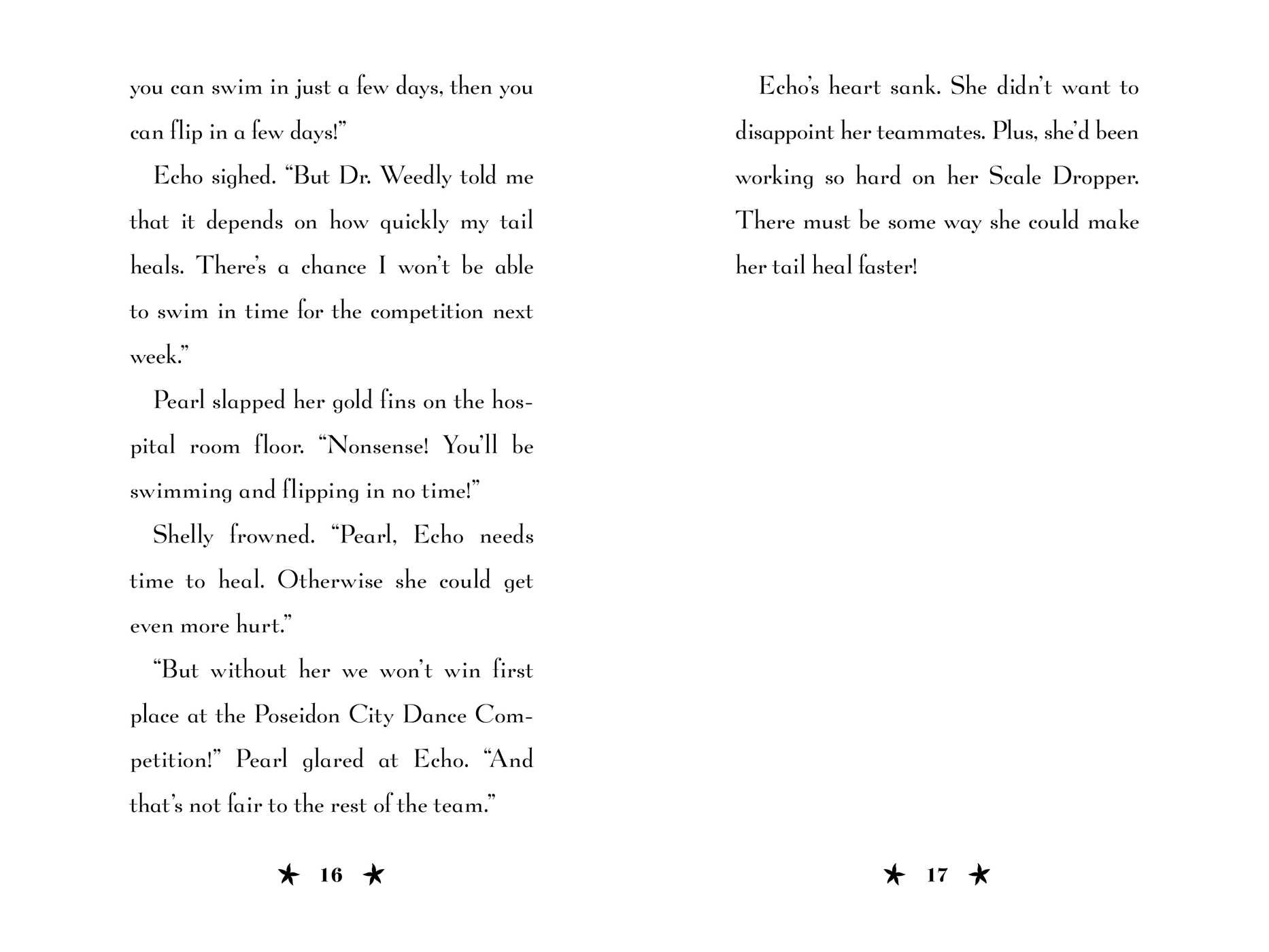 In this sparkling Mermaid Tales adventure, Echo hurts her tail when she falls off of a sea horse—right before the big Tail Flippers competition! Will she still be able to flip her way to a trophy?

Echo loves dancing in the Trident Academy Tail Flippers. When she’s not dancing, she also loves riding sea horses, so when a classmate offers to let her ride their newest horse, Pinky, she doesn’t think twice!

But when a slithery eel darts in front of Pinky, Echo gets knocked off and hits a rock. Her entire body aches—from scales to tail—so she heads to the doctor. Dr. Weedy tells Echo that moving her tail is absolutely out of the question. Not only can Echo not swim, but even worse, she can’t compete in the Poseidon Tail Flippers team competition! And Echo’s their star flipper. Without Echo’s tricks and flips, Trident City’s team doesn’t stand a chance.

Echo’s friends find a pair of human crutches, which help her get around without the use of her tail. But that doesn’t solve the Tail Flipping problem! Will Echo find a way to help her team win from the sidelines?

Sea Horses
GREAT JOB ON YOUR KELP reports,” Mrs. Karp told her class of third graders. “I’m so glad you enjoyed ‘My Side of the Ocean.’ It is one of my favorite stories.”

Echo tried to pay attention to the lesson, but she couldn’t keep her pink tail from tapping the ocean floor. She couldn’t wait until school was over! When the final conch shell sounded, Echo soared out of her seat and down the hallway of Trident Academy.

Her best friend, Shelly, followed Echo and patted her shoulder. “Do you have Tail Flippers practice today, or can you come over?”

Echo loved being part of the Tail Flippers dance team, and since the big Poseidon City Dance Competition was coming up next week, Coach Barnacle had been making them practice almost every day after school. Echo’s fins ached from all the hard work.

Echo had been working especially hard because she had a big job to do. She was going to perform a very difficult flip called a Scale Dropper. And she was going to do it from the top of a mer-pyramid formed by the other team members! It would be their big finale.

Normally, Echo would have spent her free afternoon at Shelly’s home, especially since Shelly lived right above the Trident City People Museum. Echo loved learning about the human world. But there was something else she liked just as much: sea horses!

Echo shook her head. “We don’t have practice today, but Rocky invited me to ride his sea horse this afternoon.”

Just then, Coach Barnacle swam by the mergirls. “Well, if it isn’t our star Tail Flipper herself! Tell me, Echo, how is your Scale Dropper coming along?”

“Fin-tastic!” Echo told him. “I’ve even been waking up early to practice it every day before breakfast!”

“Mervelous!” Coach Barnacle boomed. “After all, you’re our secret weapon! If you keep practicing, I think our team has a great chance of winning first place.”

Coach Barnacle zoomed down the hall just as Rocky burst out of their classroom. He took one look at Echo and grinned. “Shake your tail! It’s sea horse time!”

Echo squealed in delight. She waved good-bye to Shelly and sped out of Trident Academy after Rocky. As they swam past the Big Rock Café, Echo’s mouth watered at the smell of boxfish burgers. She’d love to have a snack, but she wanted to ride Pinky more.

Pinky was one of Rocky’s two sea horses. Zollie was his first sea horse. Rocky’s uncle had rescued Zollie from a human’s net. Pinky was Zollie’s mate, who’d come to stay at Rocky’s house too. Echo couldn’t help being a tiny bit jealous of Rocky. After all, he had two sea horses and she didn’t have any. But at least Rocky was nice enough to let Echo ride Pinky.

The two merkids swam around Rocky’s large home and a storage shell to find the two sea horses feeding on small shrimp. When the pets saw Echo and Rocky, they raced over to see them. Echo laughed and hugged Pinky while Rocky petted Zollie’s head. Soon the merkids were riding on the backs of Pinky and Zollie.

“This is shelltacular!” Rocky yelled. He leaned down over Zollie’s orange neck, urging him to go faster.

Echo did the same to Pinky and yelled, “Giddyup!”

This is what it must be like to be a sailfish, Echo thought. She loved the feeling of water whipping through her curly black hair.

Pinky sprinted through MerPark. Echo waved when she passed Pearl, a girl from her class. Pearl frowned as the two sea horses charged past. “Echo Reef! You’d better slow that thing down!” Pearl snapped.

Echo laughed and shook her head at Pearl. “No wavy way!” Echo yelled. “This is too much fun!”

But just as Echo turned her head, something horrible happened!

Debbie Dadey is an award-winning children’s book author who has written more than 150 books. She is best known for her series The Adventures of the Bailey School Kids, written with Marcia Thornton Jones. Debbie lives with her husband, her children, and three dogs in Sevierville, Tennessee.

Tatevik Avakyan has illustrated many books for children, including the Mermaid Tales series.