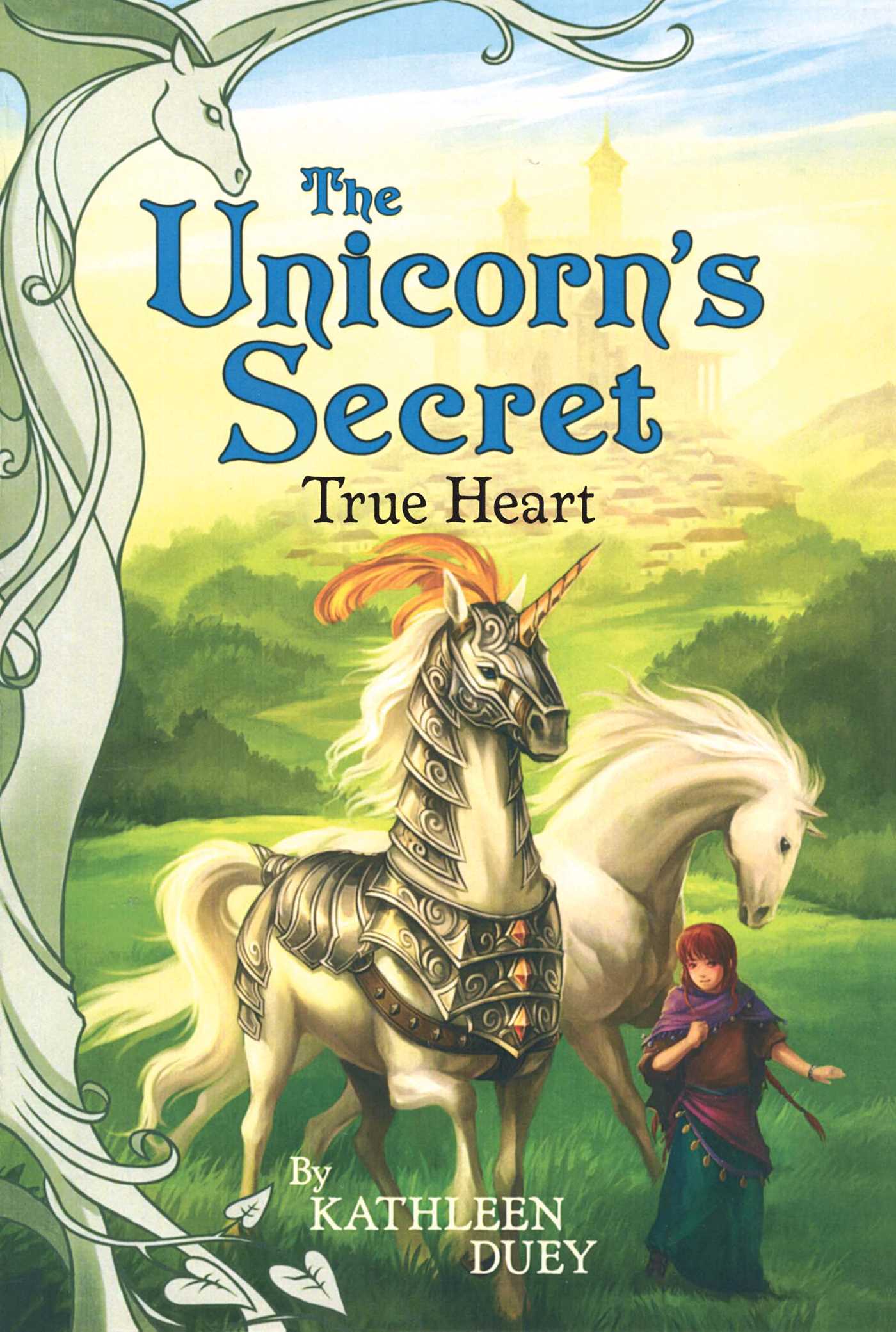 In the beautiful armor Joseph Lequire has created for Moonsilver, no one can tell he is a unicorn. It's safe for Heart to travel to Bidenfast, where she hopes to find her Gypsy friends. But the streets are jammed with people in town for the crowning of the new Lord Irmaedith, and the young lord himself takes a special interest in the unicorns. Will Heart be able to keep her secret?

Heart stood in the stone doorway.

The early chill was sharp.

Her breath made clouds of soft mist.

Kip sat beside her, his furry shoulder warm against her leg.

Heart stared at the yellow-orange glow in the valley below. The river of fire looked even stranger in the dark.

Heart knew that the sun would rise soon.

When it did, she would have to leave.

"I wish you could stay," Tibbs said from behind her.

He and Joseph had worked hard to finish Moonsilver's armor quickly.

"I don't want to leave," Heart admitted. She felt the silver bracelet tighten on her wrist for an instant.

As always, it startled her.

As always, she wasn't sure what it meant.

Heart nodded. The forge felt safe, but it wasn't, not for her -- and not for the unicorns. Too many nobles came here.

Heart bit her lip, wishing she could be sure where the unicorns would be safe.

Maybe her family would help one day.

Or maybe she would never find them.

For now, all she could do was find the Gypsies.

She thought about Binney and smiled. It would be so good to know they were all safe, to be back with her friends.

Tibbs frowned. "My master in Derrytown was nervous about teaching me. It's usually just for the nobility, you know."

Heart looked at him. "A woman in Yolen's Crossing offered to teach me."

"Was she dressed fancy?" Tibbs asked.

Tibbs was silent for a moment. He shrugged. "The lords all forbid books for common folk. Dunraven is the strictest, my master said."

Heart nodded. She had lived her whole life in Ash Grove and had never even known what a book was.

He shrugged again. "I don't know. She never said so."

"She never told me, either," Heart said. "But maybe she would keep it secret."

They were both silent for a long moment.

Heart looked back into the beautiful house. It would be wonderful to stay here, to practice reading with Tibbs, to stop traveling -- to have a home.

"Thank Joseph for me," she said aloud.

"It's been three days," Heart said, looking up at Tibbs.

"You'll find the Gypsies," he answered, understanding her instantly. Then he pointed. "Look."

Moonsilver was prancing easily down the slope.

The armor shone orange yellow in the light from the fiery river.

Heart laughed. Moonsilver was lifting his hooves high, like a horse in a parade. He was showing off.

It was as strong as real armor, but not as heavy.

Joseph had cut curved pieces out of the metal that covered Moonsilver's back and sides.

Joseph said horses sometimes died of heat sickness in closed armor, so Moonsilver's was made to be cooler too. The base of the thin silver spike that enclosed his horn had four narrow slits in it.

The top was open.

Only an eyelash-thick crescent of his horn tip showed, but air could pass through. There were slits in the cheek plates, too.

Heart nodded and looked at the sky. It was almost time to leave.

Her carry-sack was full of bread, barley, and wrinkled autumn apples from Joseph's root cellar.

She had her flints. Joseph had given her half a candle.

He had given her soft cotton rope, too. She had braided halters for the unicorns while he and Tibbs worked on the armor.

Avamir and Moonsilver had allowed her to put them on.

"I should go with you," Tibbs said quietly.

Heart met his eyes. "No, you shouldn't. You have finally found your home."

Tibbs looked into her eyes for a long moment. "Thank you, Heart. You are a true friend."

Heart took a deep breath. "I only hope I can find mine."

Tibbs reached out and touched her cheek. "You will. If you see Ruth Oakes, tell her how happy I am. Tell Binney I have doubled my skill already, just helping Joseph on the armor."

Tibbs's eyes were full of joy.

"I will tell them," Heart said.

"Try not to worry," Tibbs told her. "Binney and Zim probably talked the guardsmen around in circles and made friends of them by the time they got to Bidenfast."

Heart sighed. "Or maybe the new Lord Irmaedith heard rumors about a unicorn."

Heart scuffed at the ground. If the Gypsies were in trouble because of helping her...

She pulled in a deep breath. The sunrise was shading the sky gold pink along the horizon now. "Where is Joseph?"

"Snoring," Tibbs said. "He lay down to rest and went out like a candle."

Heart stepped out of the doorway into the chilly morning.

Heart smiled at him, then started down the steep, rocky path.