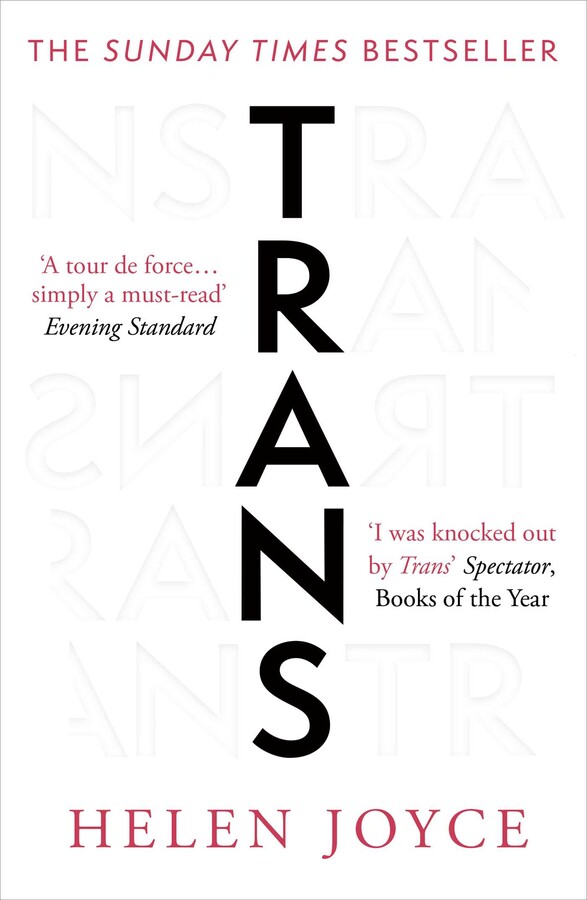 THE SUNDAY TIMES BESTSELLER and a Times, Spectator and Observer Book of the Year

‘In the first decade of this century, it was unthinkable that a gender-critical book could even be published by a prominent publishing house, let alone become a bestseller.’ Louise Perry, New Statesman

Gender identity ideology is about more than twitter storms and using the right pronouns. In just ten years, laws, company policies, school and university curricula, sport, medical protocols, and the media have been reshaped to privilege self-declared gender identity over biological sex.

People are being shamed and silenced for attempting to understand the consequences of redefining ‘man’ and ‘woman’. While compassion for transgender lives is well-intentioned, it is stifling much-needed inquiry into the significance of our bodies.

If we recommit to our liberal values of freedom of belief, freedom of speech and robust debate, we can de-escalate this most vicious of culture wars.

'A scholarly, compassionate and courageous examination of a subject that’s sparked an unhelpful civil war within the LGBTQ community. Unlike those of her online counterparts, Joyce’s arguments are well researched, soundly made and avoid the toxicity that mars so much conversation on this topic.’

– Observer, Books of the Year

‘A courageous, intelligent and important work, rooted in good science and common sense.’

'I'm off the fence...This rigorous and brave book nails the absurd idea that sex is just a “social construct”'

'A superlative critical analysis...With this fact-filled, humane, and brave book, a grown-up has entered the room.'

‘Thank goodness for Helen Joyce… Trans is a searing and at times devastating analysis of an ideological shift that has had a profound influence on many institutions in the West… With the rigour of an investigative journalist, she looks at the history of the trans movement over the past century.’

'A tour de force. With a fine eye for detail, she brings all the elements of gender ideology together with clarity and precision...simply a must-read'

‘anyone wanting to understand how transgender rights became such a flashpoint in identity politics – and why a generation of feminists is so determined to stand its ground – should start here with this polemical book by Helen Joyce.’

'An intelligent, thorough rejoinder to an idea that has swept across much of the liberal world seemingly overnight. Even those outraged by Joyce’s positions would benefit from understanding them...Open conversation about such fraught issues is the only realistic path forward.'

‘Incisive, compassionate and nuanced…In the first decade of this century, it was unthinkable that a gender-critical book could even be published by a prominent publishing house, let alone become a bestseller.’

‘I was knocked out by Trans… Biology vs magical thinking has become such a violent debate that most people involved (myself included) can’t set verbal foot in it without effing and jeffing till the air is blue. But Joyce is always cool, calm and in complete possession of her extensive collection of facts.’

– Spectator Books of the Year

‘There are few subjects which need treatment that is at once delicate, thoughtful and brave. Helen Joyce manages all of these things in Trans. Anyone looking to understand this most fraught of issues should start here.’

'How do we want to live? How do we want our children to live? Helen Joyce tackles this matter. Buy her book for your teenagers. Give it to your boss. Send it to the head of HR. Place it on a bench at the Royal Academy. Sex matters. Tell everyone.'

'Helen Joyce has written a very important, enlightened and powerfully-argued book on one of the most controversial issues of our times. For anyone who wants to understand the spirit of the age, its complexities and challenges, and how to map a truly progressive way forward. Riveting from start to finish.'

‘A searing analysis of the transgender debate that has dominated much of public discourse in Scotland in recent years, at least among feminists… I urge you to read Helen Joyce’s book… It may well offer you a new perspective on this most troubling of national conversations. It may even change your mind.’

‘This is the book every woman should read. It explains how we’re being erased, how our arguments are being distorted, and the cost of standing up...Brilliant, coruscating, brave.’

'The author brave enough to take on the trans lobby'

‘If… you look to grasp the extent to which gender identity ideology, both academic and popular, bears comparison with the worst sort of pseudoscience, then Joyce is your pick… Perhaps because of her use of biology, Joyce’s feminism is disciplined and thoughtful… [a] careful use of science.’

'Well-researched, compelling...a deeply compassionate reminder that there are real trade-offs to be made in human rights activism.’

‘[Joyce] is sharp, lucid and brilliant in analysing how the recent surge of sexual ‘transitioning’ and insistence on self-declared ‘gender identity’, has undermined feminism’s achievements.’

'The book I wish I’d had the foresight to pitch and the insight to write.'

'An ambitious, wide-ranging, yet incredibly economical book… Trans is an enormously readable and widely accessible book, full of righteous anger and common-sense feminism.'