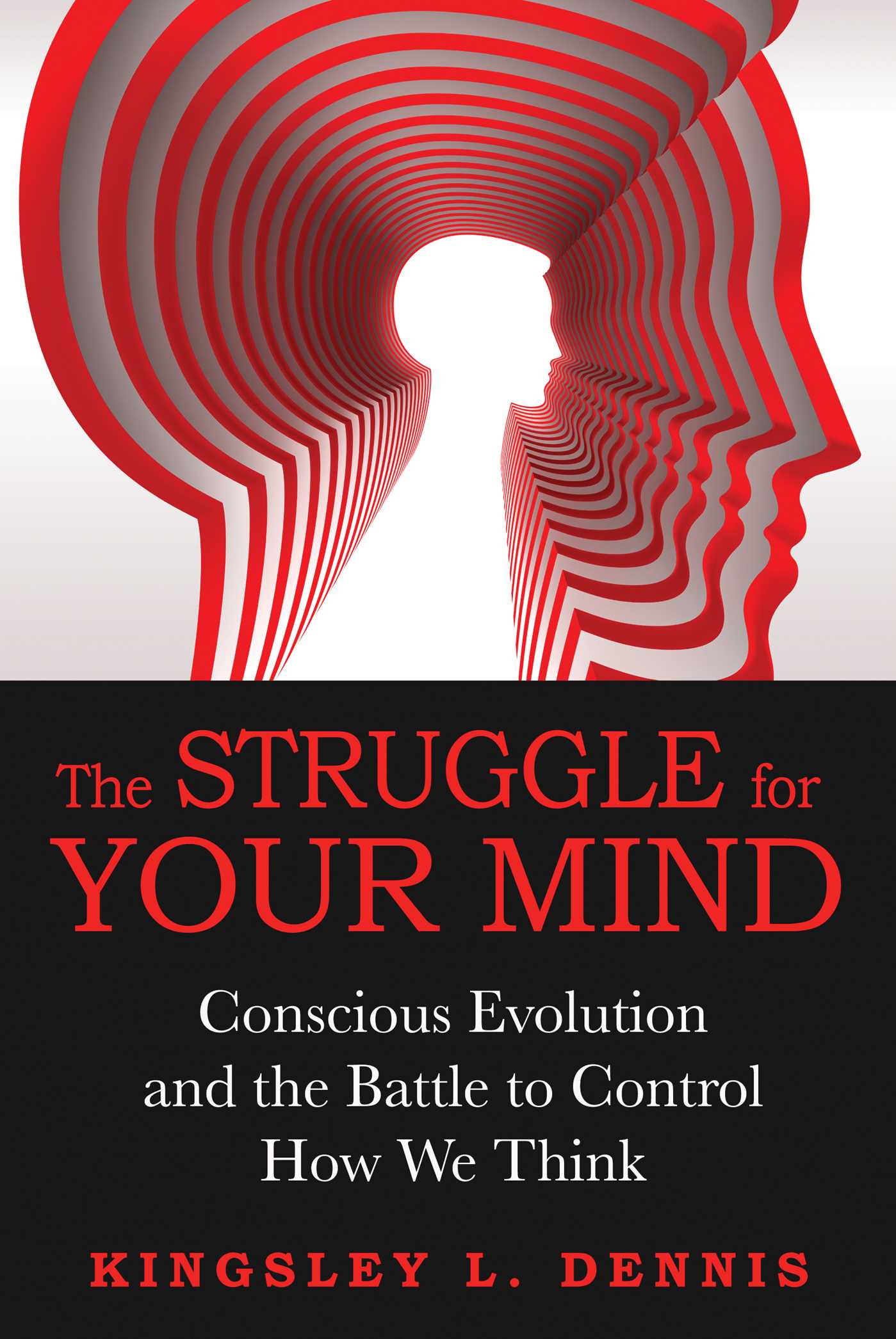 • Explores the tactics used to control consciousness, such as misinformation, debt systems, fear conditioning, and the distraction of entertainment and technology

Within society there exists a silent war. The battlefield is our everyday lives: our education, our work, our leisure, our emotional and spiritual well-being, and our thinking and perceptions. Our very sense of “reality” is deliberately engineered to work against conscious evolution and preserve social norms. In short, we are all part of a war of consciousness. And the opportunity is at hand for us to win.

Assessing the ways modern societies limit consciousness and keep humanity obedient and distracted from their inner lives, Kingsley Dennis presents an eye-opening investigation of the way our minds have been programmed to preserve incumbent power structures and their rules. He exposes the tactics employed for thousands of years by the elite to control our minds, including misinformation and propaganda, debt systems, consumerism, religious doctrine, scientific authority, economic “uncertainties,” fear of terrorist attacks and armageddon, distraction through entertainment and technology, as well as the false belief that we are separate from Nature and the Divine. Despite these obstacles, humanity is awakening to culture’s imposed limits on perception through an accelerating rise in collective empathy and awareness. Exploring the biology of consciousness, Dennis reveals the emerging mechanisms for neurogenetic evolution within the brains of gifted individuals, psychics, and visionaries and the coming increases in solar and magnetic energies that will activate them within all of us.

Explaining how we can free up mental and emotional energy to break through the barriers inhibiting conscious evolution, he shows that by taking back our minds and changing the way we think, we can restore our connection with Nature and the Divine and lead humanity into a new age of harmony and awareness.

Chapter 2
The Modernity Project
The Rise of Scientific Technique

The term modern usually conjures up images of progress, development, and betterment. After all, we have been led to believe that to be “modern” implies that one is at the forefront of change. And so it is with many “modern societies”: that they are developing a way forward that is supposedly for the betterment of the citizens. Further, that this Modernity Project, which is a form of science, technology, and organization for postindustrial societies, is the inevitable result of positive progress. As philosopher Bertrand Russell suggests, science also means that techniques are now available for the better analysis, management, and control of the people. This form of scientific technique is in some ways the “inevitable” outcome of increasingly mechanized and rational societies. With improved methods for the organization and management of social practices, more highly concentrated forms of power and control are made possible. This is what is now meant by social forms of technique.

Technique is not necessarily about machines or technology, although it does include them. It is primarily about the ability and methods to increasingly organize and create efficient order. It is about strategies of power and the rationality of control. It could be said that technique is actually the means to enact processes of increased mechanization. This is especially so now, in the twenty-first century, when so much technology has become embedded into our social fabric. Rather than being convenient to us, our techno-mechanized system is turning “us” into the convenience. The last bastion of defense and protest is human consciousness: not only how we think but also how we create and manifest our own inner power and authority. It appears that this has now become the ultimate target for social technique: the containment and control of human consciousness.

The Modernity Project seeks to establish “scientific technique” as a means to absorb and integrate the human being into everything. In the end, a person is not external to anything: there is no “outside” as each individual is absorbed into the very fabric of the system. The danger here is that this momentum leads not toward unified diversity but toward a very real looming standardization. Such techniques as employed in society include the whole array of social conditioning processes--from institutions such as school, church, work, media--to tools such as propaganda and modern communications. It is an all-embracing and all inclusive social matrix. By using the term “social matrix” I am referring to the array of bodies (institutions, laws, policing, education, religion, etc.) that are woven together to form the workings of a control society. And in “control societies” there are both covert and overt strategies for the cultural conditioning of behavior and thought. Institutions and organizations within a social matrix act to concentrate specific forms of power through an array of social networks and hubs. As Russell noted in his investigations into scientific technique:

The completeness of the resulting control over opinion depends in various ways upon scientific technique. Where all children go to school, and all schools are controlled by the government, the authorities can close the minds of the young to everything contrary to official orthodoxy. . . . It may be hoped that in time anybody will be able to persuade anybody of anything if he can catch the patient young and is provided by the State with money and equipment.

Social technique becomes an intermediary not only between a person and their environment but also between a person, their own knowledge base, and their inner self. Such techniques when applied through social institutions strengthen the primacy of matter and serve to bury the manifestation and potential of the human spirit. The human being is increasingly assimilated into a world devoid of magic, mystery, and wonder. These realms or spaces of enchantment become superstition and “primitive,” effectively blocking inherent channels of communication and connection. The human being becomes disqualified from a more expansive world of perception and is instead pulled down--or “distracted by design”--into a constricted, material, magic-less world of prohibitions and “hard-knocks.” There is increasingly less room available for the creativity and expression of the human spirit. The once individual responsibility of self-control has now been turned in to a state function: that of a top-down authoritative procedure of “control of self.” The end goal of this design is for sustained internal coherence of the society. This ensures control and continuity. Again, quoting Russell:

It is to be expected that advances in physiology and psychology will give governments much more control over individual mentality than they now have even in totalitarian countries. Fichte laid it down that education should aim at destroying free will, so that, after pupils have left school, they shall be incapable, throughout the rest of their lives, of thinking or acting otherwise than as their schoolmasters would have wished.

Many of our modern global societies now exhibit a “technical consciousness” that operates through regulation, rationality, and calculated efficiency--the very opposite of the natural, the organic, and the spiritual. The necessary prior conditions included: a relatively quick period of technological development, rapid urban growth, an organized economical structure, a social atmosphere receptive to the rise of technical institutions, and a clear national/state intention for control.

The use of technique in today’s modern societies is not about advancing and developing each individual’s freedom. Rather, it is based on a calculus of efficiency that operates to sacrifice the autonomy of the individual for the automation of the collective. Within this system there is provided a limitation of choice. Or, in other words, a person is given the perception of choice within an environment of having no real choice. It is within this technical-social matrix that entertainment and other distraction industries serve their primary roles: they “entertain” us into contentment and containment. Or, as one critic noted, they “amuse us to death.”
Kingsley L. Dennis

“Explaining how we can free up mental and emotional energy to break through the barriers inhibiting conscious evolution, he shows that by taking back our minds and changing the way we think, we can restore our connection with Nature and the Divine and lead humanity into a new age of harmony and awareness.”

“The Struggle for Your Mind is a must for metaphysical and new age spirituality collections, very much recommended thinking.”

“Dr. Dennis reflects on social engineering techniques and modern technoculture, and encourages us to rise above fear and helplessness to make positive changes in ourselves and the world around us.”

“Exploring the biology of consciousness, Dennis reveals the emerging mechanisms for neurogenetic evolution within the brains of gifted individuals, psychics and visionaries, and the coming increases in solar and magnetic energies that will activate them within all of us. Explaining how we can free up mental and emotional energy to break through the barriers inhibiting conscious evolution, he shows that by taking back our minds and changing the way we think, we can restore our connection with nature and the Divine and lead humanity into a new age of harmony and awareness. This is a revolutionary call to overthrow society’s mental controls and expand consciousness for the greater good of humanity.”

“...a brief, practical guide to winning back your mind – simple, intuitive practices to quell fear and alienation, while promoting spontaneous, benign mutation.”