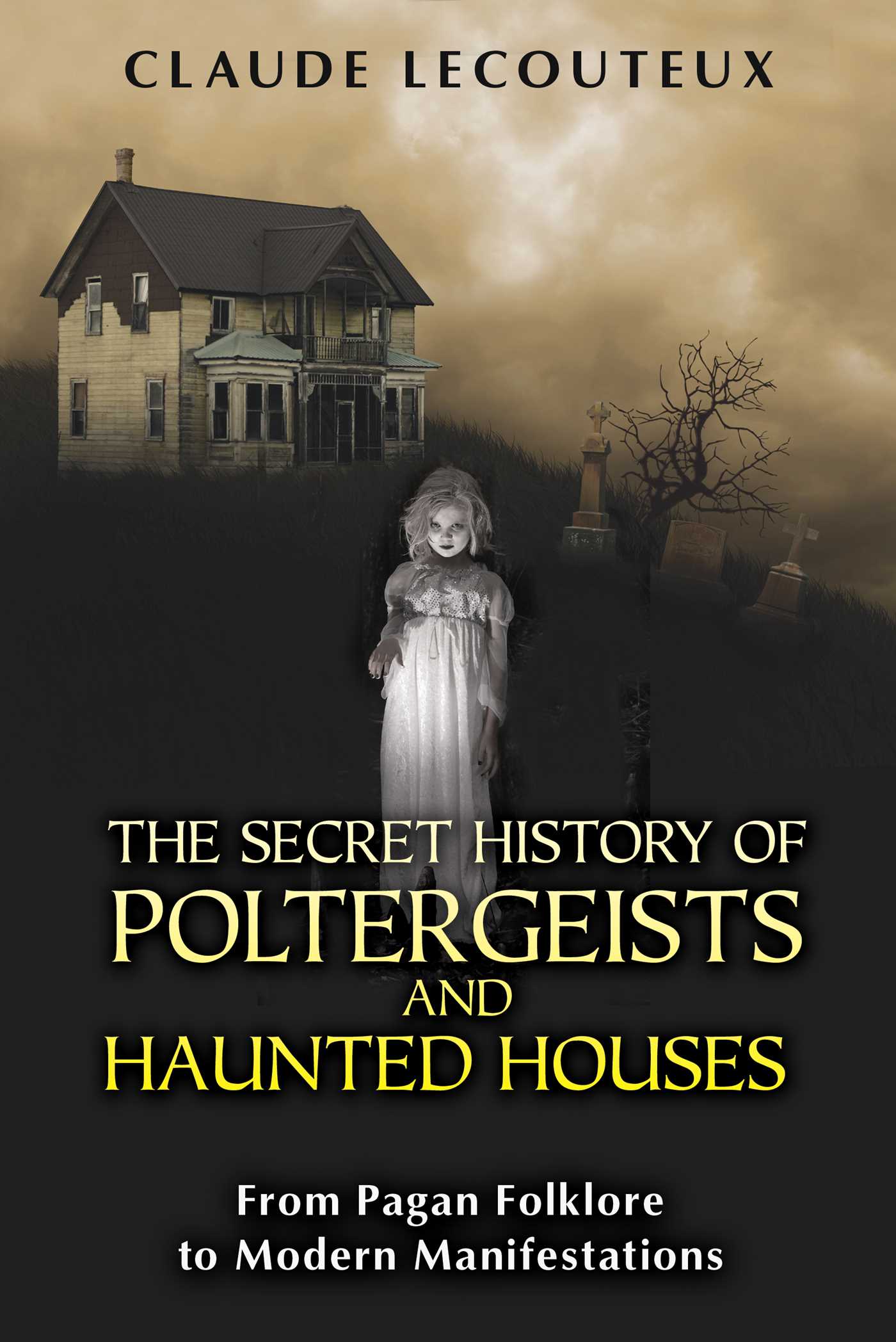 The Secret History of Poltergeists and Haunted Houses

From Pagan Folklore to Modern Manifestations

What poltergeist accounts through the ages reveal about our own worldviews

• Explores the relationship between poltergeists and troubled adolescence

Stories of poltergeists and their mischievous and sometimes violent actions--knocking, stone or chair throwing, moving objects with invisible hands, and slamming or opening doors--are a constant through the ages. What changes is how we interpret this activity. For our pagan ancestors this phenomenon was caused by helper spirits whose manifestations revealed their unhappiness with a household. The medieval Christian church demonized these once helpful spirits and held exorcisms to expel them from the houses they haunted--which proved effective less than half the time. The Age of Enlightenment cast these incidents as clever hoaxes, and many still believe this today. But poltergeist manifestations continue to appear and often defy attempts to debunk them as pranks. What then is behind this phenomenon?

Exploring accounts of poltergeists from ancient Greece and Rome, medieval Europe, and the modern world, Claude Lecouteux finds that while our interpretations of poltergeists may change, the manifestations always follow a similar course and evolution. He shows how modern scientific studies of poltergeist manifestations have found a strong tie between these visitations and the presence of a troubled adolescent in the house. Looking beneath the Christian adulteration of pagan practices to reveal the hidden ancestral beliefs tied to poltergeists and haunted houses, the author shows how these unhappy spirits serve as confirmation of the supernatural beings that share the earth with us and of our relationship with the natural and unseen world, a relationship we must take care to keep in balance.

Chapter 4
The Knocking and Noise-making Dead

They [the seers] also affirm those Creatures that move invisibly in a House and cast huge great Stones but do not much Hurt because counter wrought by some more courteous and charitable Spirits that are everywhere ready to defend Men, to be Souls that have not attained their Rest.
--Robert Kirk, 1691

One of the oldest accounts of noises caused by a dead individual is from Pliny the Younger (62-113), who, in a letter to his friend Sura, tells us this:

There was at Athens a large and roomy house, which had a bad name, so that no one could live there. In the dead of the night a noise, resembling the clashing of iron, was frequently heard, which, if you listened more attentively, sounded like the rattling of chains, distant at first, but approaching nearer by degrees: immediately afterward a specter appeared in the form of an old man, of extremely emaciated and squalid appearance, with a long beard and disheveled hair, rattling the chains on his feet and hands. The distressed occupants meanwhile passed their wakeful nights under the most dreadful terrors imaginable. This noise broke their rest, ruined their health, and brought on distempers as their terror grew upon them, and death ensued. Even in the daytime, though the spirit did not appear, yet the impression remained so strong upon their imaginations that it still seemed before their eyes, and kept them in perpetual alarm. Consequently the house was at length deserted, as being deemed absolutely uninhabitable; so that it was now entirely abandoned to the ghost. However, in hopes that some tenant might be found who was ignorant of this very alarming circumstance, a bill was put up, giving notice that it was either to be let or sold.

It happened that Athenodorus the philosopher came to Athens at this time, and, reading the bill, inquired the price. The extraordinary cheapness raised his suspicion; nevertheless, when he heard the whole story, he was so far from being discouraged that he was more strongly inclined to lease it, and, in short, actually did so. When it grew toward evening, he ordered a couch to be prepared for him in the front part of the house, and, after calling for a light, together with his pencil and tablets, directed all his people to retire. But that his mind might not, for want of employment, be open to the vain terrors of imaginary noises and spirits, he applied himself to writing with the utmost attention.

The first part of the night passed in entire silence, as usual; at length a clanking of iron and rattling of chains was heard: however, he neither lifted up his eyes nor laid down his pen, but, in order to keep calm and collected, tried to pass the sounds off to himself as something else.

The noise increased and advanced nearer, until it seemed at the door, and at last in the chamber. He looked up, saw, and recognized the ghost exactly as it had been described to him: it stood before him, beckoning with the finger, like a person who calls another. Athenodorus in reply made a sign with his hand that it should wait a little, and threw his eyes again upon his papers; the ghost then rattled its chains over the head of the philosopher, who looked up upon this, and seeing it beckoning as before, immediately arose, and, light in hand, followed it.

The ghost slowly stalked along, as if encumbered with its chains, and, turning in to the area of the house, suddenly vanished. Athenodorus, being thus deserted, made a mark with some grass and leaves on the spot where the spirit left him. The next day he gave information to the magistrates, and advised them to order that spot to be dug up. This was accordingly done, and the skeleton of a man in chains was found there; for the body, having lain a considerable time in the ground, was putrefied and moldered away from the fetters. The bones, being collected together, were publicly buried, and thus after the ghost was appeased by the proper ceremonies, the house was haunted no more.

The reasons for the noises are clear and are the same as those in the Life of Saint Germain of Auxerre. The dead man is seeking to draw attention to his sad fate. Not having received a ritual burial, he cannot find rest. The noise here therefore is a language expressing a request, an interpretation that has traveled down through the centuries on into the present. This story enjoyed great success and was picked up by Robert du Triez in Ruses, finesses et impostures des esprits malins [Subtle Poses and Frauds of Evil Spirits] (Cambrai, 1563), by the Capuchin monk Noël Taillepied (died 1589) in his Traicté de l’apparition des esprits [Treatise on the Apparition of Spirits], as well as by Béroald de Verville (1558-1612), canon of Saint Gautier of Tours in his Le Palais des curieux [The Palace of the Curious] (Paris, 1612), which ensured it widespread distribution over the sixteenth and seventeenth centuries.

That a notion arose to connect a death to poltergeist phenomena clearly emerges in an account from 1583. An inhabitant of a house in Riga died and peculiar things began occurring in the house: when the household was at the table, it would suddenly be lifted up; piles of straw were chopped into chaff; the doors to the rooms, although padlocked, were torn from their hinges; enormous stones coated with pitch were cast from on high, seriously wounding a Polish man who was present. The disorders came to an end when a priest blessed the house with water and incense before they even had to resort to an exorcism.
Claude Lecouteux

“I can’t imagine a more thorough text available on the subject of poltergeists and the homes they haunt. Are they spirits, genies, the dead, the Devil, demons, witchcraft, hoaxes, or from psychokinetic abilities? Lecouteux covers all of that as well as the variety of ways people from all eras would attempt to rid themselves of poltergeists. If you’re anybody who is anybody claiming to know anything about the paranormal, you have to read this book. Also, if you’re anybody looking for an insanely fascinating read about the evolution of poltergeists in human culture, you also really should read this book.”

“For those interested in paranormal research and study, this book is an incredible resource, presenting a substantial collection of documented accounts of paranormal activity in several classifications. Overall this is an excellent and interesting study.”

“...the book looks beneath the Christian adulteration of pagan practices and reveals the hidden ancestral beliefs linked to polts and their connection with household spirits such as brownies, hobgoblins and house elves found in European folklore. Recommended.”

“Once again Claude Lecouteux produces a thoroughly researched, eminently readable and delightfully entertaining text that blends scholarly ethos with respect for the unknown. Lecouteux turns his attention to the phenomenon of poltergeists and other ghostly haunting, taking care to scrupulously trace first hand accounts and second hand analyses from medieval through modern times. Lecouteux is meticulous in his approach, paying particular attention to establishing the proper definition of deployed terms. Readers with a casual interest in the supernatural will find their knowledge greatly expanded and their curiosity provoked even further. Those already adept in the subject will nonetheless find much to mull over.”

“Claude Lecouteux offers an exhaustively researched history of poltergeist activity and hauntings from the middle ages to today. Packed full of case histories and general information, The Secret History of Poltergeists and Haunted Houses is an essential addition to the library of any serious ghost hunter or paranormal enthusiast. Lecouteux maintains an evidential viewpoint, balancing skepticism with the inevitable conclusion that, like it or not, poltergeist phenomenon is real...The Secret History of Poltergeists and Haunted Houses seeks to inform, not entertain, and is a welcome change from the standard book store fare.”

“A real pleasure to read before Samhain, The Secret History of Poltergeists and Haunted Houses is a special treat for everyone who enjoys scary stories as much as I do! If you would like to learn more about how many types of poltergeist there are, and what type of noises spirits and different creatures make, this is the book for you--amazing stories about cursed houses, haunted places, exorcism of homes haunted by demons from Italy to Scandinavia, from middle Ages until present times.”

The Secret History of Poltergeists and Haunted Houses

From Pagan Folklore to Modern Manifestations