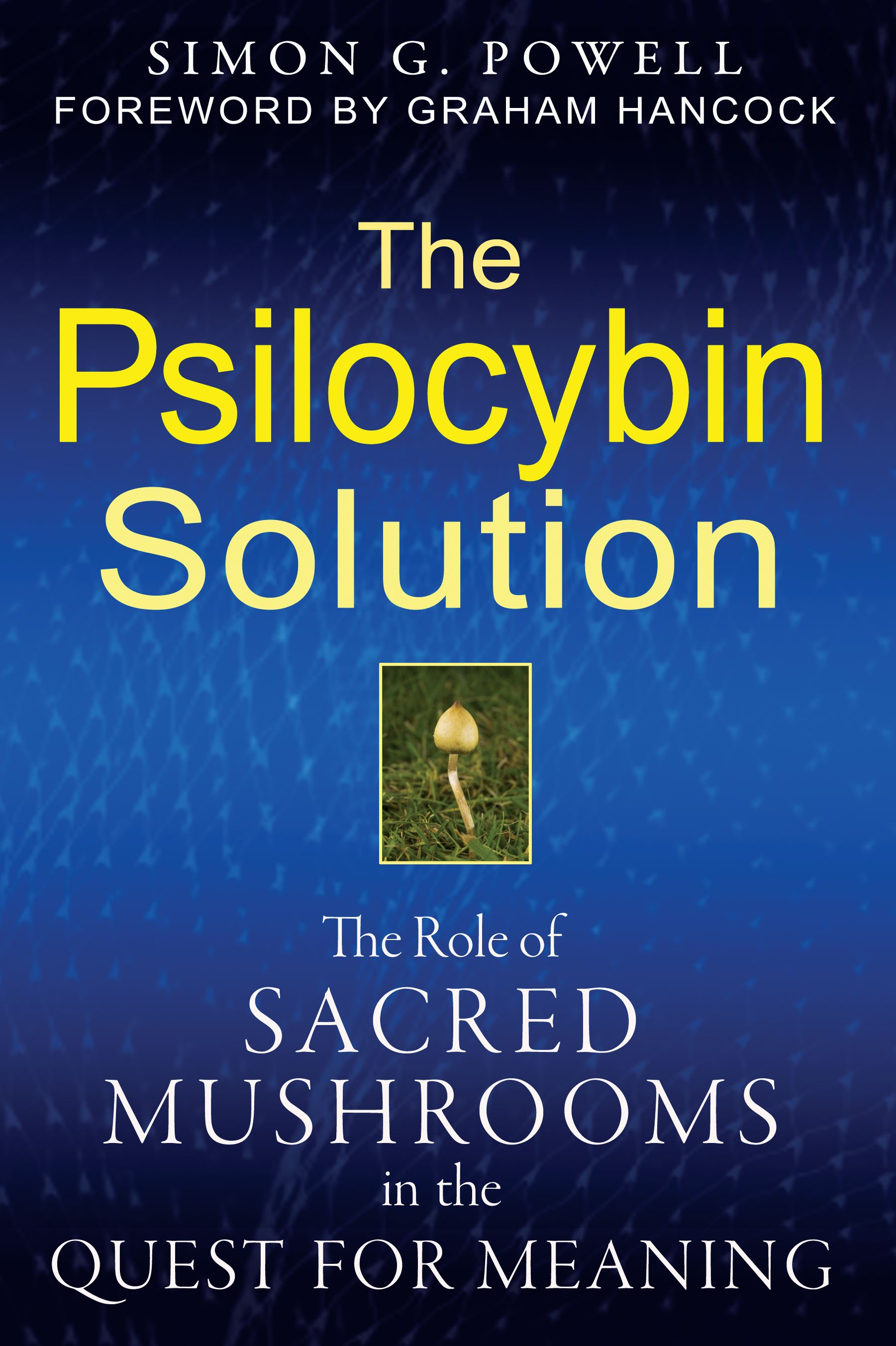 It has been more than 50 years since sacred mushrooms were plucked from the shamanic backwaters of Mexico and presented to the modern world by R. Gordon Wasson. After sparking the psychedelic era of the 1960s, however, the divine mushroom returned underground from whence it mysteriously originated. Yet today, the mushroom’s extraordinary influence is once again being felt by large numbers of people, due to the discovery of hundreds of wild psilocybin species growing across the globe.

In The Psilocybin Solution, Simon G. Powell traces the history of the sacred psilocybin mushroom and discusses the shamanic visionary effects it can induce. Detailing how psilocybin acts as a profound enhancer of consciousness and reviewing the research performed by the Multidisciplinary Association for Psychedelic Studies (MAPS), Johns Hopkins University, and the Heffter Research Institute on psilocybin’s ability to dispel anxiety in the terminally ill and its helpful effects on obsessive-compulsive disorder, he examines the neurochemistry, psychology, and spirituality underlying the visionary psilocybin experience, revealing the interface where physical brain and conscious mind meet. Showing that the existence of life and the functioning of mind are the result of a naturally intelligent, self-organizing Universe, he explains how sacred mushrooms provide a direct link to the wisdom of Nature and the meaning of life.

A Universe of Information

In the context of traditional psychedelic shamanism as practiced in South America, the mythological conception of reality held by the whole tribe stems from the effects of entheogenic plants upon the psyche of the shamanic voyager. And, as the acid gurus of the 1960s testified, worldviews are at stake when it comes to the use of psychedelics. Chemically instigate a change in an individual’s underlying concepts about reality, and culture transforms itself also.

In each of the above cases, reality is the issue at stake, along with the importance of the psychedelic experience in shaping it. Even without a psychedelic experience, Nature demands that we conceive it in some kind of organized way. Because we are woven into the very fabric of the Universe, we cannot ignore its true nature forever. Perhaps, for the most part, we conceive the nature of reality unconsciously, for we all carry around tacit assumptions and beliefs about the world. Like our consciousness, we take many things for granted and may hardly ever reflect upon them. What makes psilocybin so remarkable is its uncanny ability to take one’s precious store of reality concepts and shake them about vigorously so as to reveal just how fragile and shallow-rooted these ingrained beliefs might be. The true nature of reality then becomes a kind of “unfinished business” that simply must be dealt with. This is the clarion call of the psilocybin mushroom advocate. If we really wish to understand the reality process and the sense and significance of human life within it, entheogens offer us a path to the Other, a sentient and intentional agency made of information whose presence and teachings await us.

One cannot stop reality, and this makes its nature formidable regardless of what you believe. The sun warms us or burns us. The cold of winter bites at our flesh and our homeostatic bodies automatically respond by shivering. The relentless rush of our billion-cell biology propels us toward sex, always it seems, making us grope, cling, moan, and shudder. This same biological march also puts us to sleep every night. We awaken, and again there it is--the reality process. We are inescapably bound up in it like grains of sand caught up in an everlasting vortex of wind.

As I remarked in the introduction to this book, whatever you may have read, the ultimate nature of the reality process remains open to question. Science seems always to reveal more mystery as it delves into the heart of “matter.” What is more, science is done first and foremost to gather data. How this data is interpreted is another matter. What is a complex mechanical system to one scientist might be blatant proof of an organizing intelligence to another. And, as for the long sought-after super-theory that will be able to explain the totality of Nature in terms of, say, umpteen dimensional superstrings, or in terms of some convoluted mathematical equation that only a few institutionalized professors can really understand, these are likely to omit an explanation for consciousness and the mysteries of mind. Indeed, such a final theory, such a final equation scrawled upon a blackboard with one fell swoop of chalk, will probably serve only to confuse the average mind rather than enlighten it.

It seems apparent that if we open ourselves to the vast cosmic mystery of existence, then we could do a lot worse than pursue the implications of the psilocybin experience. To consume the sacred mushroom is to launch oneself wholeheartedly into the mystery of being, the mystery of our short existence within this big system we call Nature.

As it is, the nature of the Universe in which we find ourselves is defined by the prevailing conceptual systems built into our culture. In our case, the predominately reductive and materialistic paradigm favored by most of the science community shapes our views about reality. In the traditional scientific outlook that permeates our educational institutions and the media, there is no real room for any kind of transcendental aspect to Nature. Nature is there, Nature is eminently intelligible, we can learn how it works, and that’s really all there is to it. Suggesting that Nature has a spiritual dimension or an intentional quality is anathema to most scientists.

The entheogen advocate will doubtless have a stereotypical image of a hardnosed reductive scientist. It will be a he, and he will be old, scary, and grim faced, always waving a dry finger of admonishment at any talk of a so-called sentient and intentional Other. If psilocybin visions cannot be empirically measured in the lab then forget it, he will say. And if one points to the few scientific experiments that have attempted to quantify the psychedelic experience in some way, our gloomy specter will doubtless pick holes in the methodology and ask for more proof. He would maintain that these experiences are simply too subjective and too personal to base any objective claims about reality upon.

Still, as I hope I have demonstrated, psychedelic phenomenology flies in the face of claims that Nature lacks a spiritual side; or at least the psilocybin experience offers what I believe to be the most compelling reason to grant Nature an intent of some kind. This appears to be a neat and valid side step with which to bypass the bleak presence of the reductive materialist. Indeed, the real possibility that the reality process has a fantastically benign and purposefully smart aspect becomes readily apparent through psilocybin.

Psilocybin represents a catalytic agent of change in the domain of perceived reality, and this is why we shall now pursue the implications raised by the information-based propositions stated at the outset of this chapter. We are now armed and ready to review the bigger picture in the light of the psilocybin experience. This will prove to be astounding, so hold tight.
Simon G. Powell

“Simon G. Powell has crafted a magnificent, multifaceted argument for the reintegration of psychedelics into science, culture, psychotherapy, and religion to inspire our unbalanced species before we ‘push the biosphere into total decline.’ The Psilocybin Solution persuasively illuminates the profound social value of large numbers of people experiencing communion with and direct personal perception of Nature as a single system of self-organizing intelligence. A massive accomplishment!”

– Rick Doblin, Ph.D., founder and president of the Multidisciplinary Association for Psychedelic Studi

“This book provides a clear and up-to-date picture of what goes on in the brain during the visionary psilocybin experience. The author’s intrepid speculations, centering on information as the fundamental stuff of the universe, are clearly signposted. The writing is lucid and a joy to behold, an important contribution.”

– Jeremy Narby, anthropologist and author of The Cosmic Serpent, Intelligence in Nature, and The Psych

“The profound experiences unlocked by the visionary psilocybin-containing mushrooms are more than a recreational holiday for the mind. They are, in fact, the key to understanding that consciousness is not an aspect of reality, it is reality itself.”

“A worthy successor to Aldous Huxley’s The Doors of Perception, The Psilocybin Solution takes the reader behind the grand curtain of reality with a compelling hypothesis that approaches a unified field theory of human consciousness in an intelligent and interconnected universe.”

“In this fascinating and provocative book, Simon G. Powell speculates on the nature of reality. He posits that Nature is a deliberate and intelligently behaving system, and he proposes that psilocybin, by altering the neurochemistry of the brain in specific ways, enables novel patterns of information to emerge, allowing the psyche to become a sort of conduit to the Other. If in fact that is what actually happens, then entheogens (psychedelics) are much more important to the human species than has been realized.”

“It’s as if these fungi, which grow wild on most of the Earth’s land surface, beckon us to commune with them, Powell hints. And if we do have the chance, we’d do well to heed his advice on the “retuning” process. This communion offers a link with the intelligence of Nature. Opening the doors of perception and returning to entheogenic wisdom could ultimately create a more mystical, meaningful society.”

“Read this book. Follow directions in the last chapter closely. Confirm or deny.”

“All in all, this is a stimulating and revolutionary volume, whatever your take on “chemically induced theophany.””