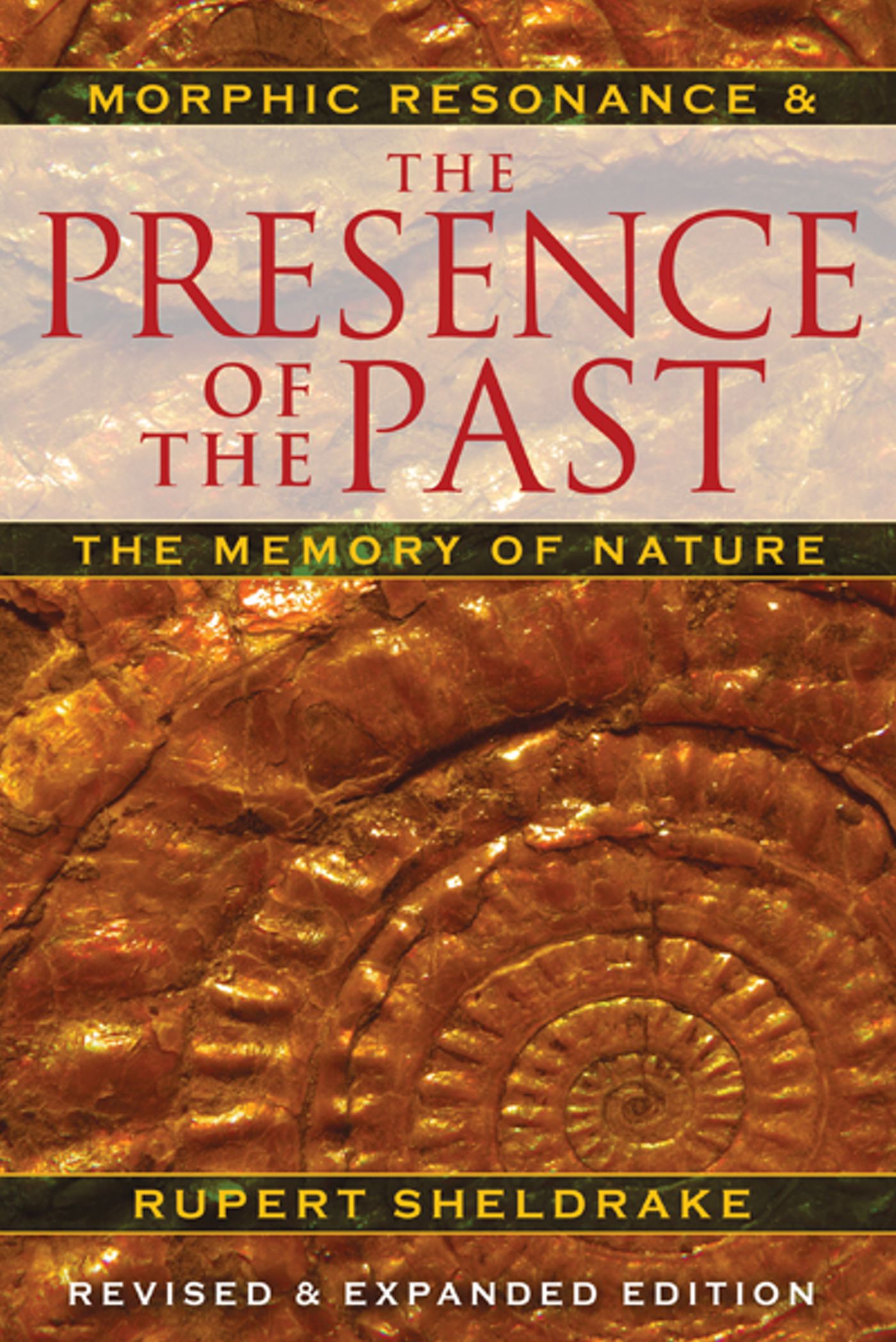 By Rupert Sheldrake
LIST PRICE $24.95
PRICE MAY VARY BY RETAILER

Explains how self-organizing systems, from crystals to human societies, share collective memories that influence their form and behavior

In this fully revised and updated edition of The Presence of the Past, Cambridge biologist Rupert Sheldrake lays out new evidence and research in support of his controversial theory of morphic resonance and explores its far-reaching implications in the fields of biology, chemistry, physics, psychology, and sociology.

His theory proposes that all self-organizing systems, from crystals to human society, inherit a collective memory that influences their form and behavior. This collective memory works through morphic fields, which organize the bodies of plants and animals, coordinate the activities of brains, and underlie conscious mental activity. Sheldrake shows how all human beings draw upon and contribute to a collective human memory and that even our individual recollections depend on morphic resonance rather than physical storage in the brain. He explores the major role that morphic resonance plays not just in animal instincts and cultural inheritance, such as religion and ritual, but also in the larger process of evolution, which Sheldrake shows to be more an interplay of habit and creativity than a mere “survival of the fittest.”

Offering a replacement for the outdated, mechanistic worldview that has dominated biology since the nineteenth century, Sheldrake’s new understanding of life, matter, and mind shows that rather than being ruled by fixed laws, nature is essentially habitual. And because memory is inherent in nature, he explains, in order to survive successfully for generations to come, we will have to give up our old habits of thought and adopt new ones: habits that are better adapted to life in a world living in the presence of the past--as well as the presence of the future.

In vertebrates, the coordination of individuals within a group is sometimes so close that it is almost impossible not to think of them as a kind of composite organism. Many species of fish form schools or shoals, and at a distance a fish school resembles a large organism. Its members, numbering up to several million, swim in tight formations, wheeling and reversing in near unison. The fish do not follow particular leaders. When the school turns to the right or left, individuals formerly on the flank assume the lead.

Schools exhibit characteristic patterns of behavior, particularly in response to potential predators. When under attack, a school may respond by leaving a gaping hole around the predator. More often the school splits in half and the two halves turn outward, eventually swimming back around the predator and rejoining. This is known as the fountain effect and leaves the predator ahead of the school. Each time the predator turns, the same thing happens.

The most spectacular of the schools’ defenses is the “flash expansion,” so called because on film it looks like a bomb bursting as each fish simultaneously darts away from the center of the school as the group is attacked. The entire expansion may occur in as little as one-fiftieth of a second, and the fish may accelerate to a speed of ten to twenty body lengths per second within that time. Yet they do not collide. “Not only does each fish know in advance where it will swim if attacked, but it must also know where each of its neighbours will swim.”

How schooling behavior is coordinated remains a mystery. Even if the means by which they are aware of each other’s positions were understood, this would still not account for such rapid coordinated responses as the flash expansion; a fish could not sense in advance where its neighbors were going to move. However, if the school is organized by a morphic field that embraces all the fish within it, the properties of this field could underlie the behavior of the school as a whole and help account for the coordinated behavior of the individual fish within it.

Flocks of birds, like schools of fish, show such a remarkable coordination of their individual members that they too have often been compared to a single organism.

The banking movements of large flocks of dunlins (sandpipers) have been studied by taking slow-motion films and examining the way the movement of the flock was initiated. The movement was not exactly simultaneous, but rather started either from a single individual or from two or three birds together. The initiation of a change of direction could occur anywhere within the flock, and maneuvers always propagated through the flock as a wave radiating from the initiation site. These waves moved very rapidly, taking on average 15 milliseconds to pass from neighbor to neighbor.

In the laboratory captive dunlins were tested to find out how rapidly they could react to a sudden stimulus. The average startle reaction time to a sudden light flash was 38 milliseconds. This means that it is very unlikely that they can bank in response to what their neighbors do, because this banking response occurs quicker than the measured reaction time. When the films were examined very carefully, it turned out that at the very beginning of the flock’s movement, the neighbors of the initiating bird reacted more slowly: on average the immediate neighbors took 67 milliseconds to react.

Wayne Potts, who carried out this study, proposed what he called the chorus-line hypothesis to explain it, based on experiments carried out in the 1950s with human chorus lines. The dancers rehearsed particular maneuvers, which were then initiated by a particular person without warning. The rate at which the maneuver propagated along the line was estimated from films and was on average 107 milliseconds from person to person, nearly twice as fast as an average human visual reaction time of 194 milliseconds. Potts suggested that the individuals saw the approaching maneuver wave and estimated its arrival time in advance. He thought his findings with dunlins supported this hypothesis: the slower reaction time of the immediate neighbors of the initiating birds occurred because they could not see an advancing wave, for this wave had not yet developed.

At first sight, Potts’s chorus-line hypothesis appears to provide a straightforward mechanistic explanation for the banking phenomenon, removing the need for more mysterious factors such as thought transference or morphic fields. But does it?

First of all, because these waves can propagate in any direction through the flock, Potts assumed that the birds sensed and noticed such waves almost immediately, even if they were coming from directly behind them. This required them to have practically continuous 360-degree visual attention, which is not plausible.

However, for the purpose of argument let us assume with Potts that this was the case. A second problem now appears. The birds did not respond to the approaching maneuver wave in a nonspecific reflex manner like the startle reaction to a sudden flash of light. They changed their pattern of flight in a precise way; the angle, speed, and duration of their turning were precisely integrated with those of the rest of the flock; densely packed as they were, none of the birds collided. Although there were a limited number of flock maneuvers, they were not stereotyped in their quantitative details. They were more flexible than a wellrehearsed chorus line going through standard routines. Not only would the birds have to sense an advancing wave, they would have to know exactly how they should turn. In terms of the present hypothesis, the coordination of their movements depends on the morphic field of the flock.
Rupert Sheldrake

"Few of us recognize revolutions in the making. Anyone who wants to be able to say in the future, 'I was there,' had better read The Presence of the Past."

"Bold, clear, and incisive, Sheldrake's thesis constitutes a sweeping challenge to the very fundamentals of established science. It may outrage or delight, but it will never fail to stimulate. Sheldrake has a remarkable ability to identify the weak spots of scientific orthodoxy."

– Paul Davies, author of The Edge of Infinity

"So compelling that it sets the reader to underlining words and scribbling notes in the margin."

"Rupert Sheldrake is the most controversial scientist on Earth."

By Rupert Sheldrake
LIST PRICE $24.95
PRICE MAY VARY BY RETAILER