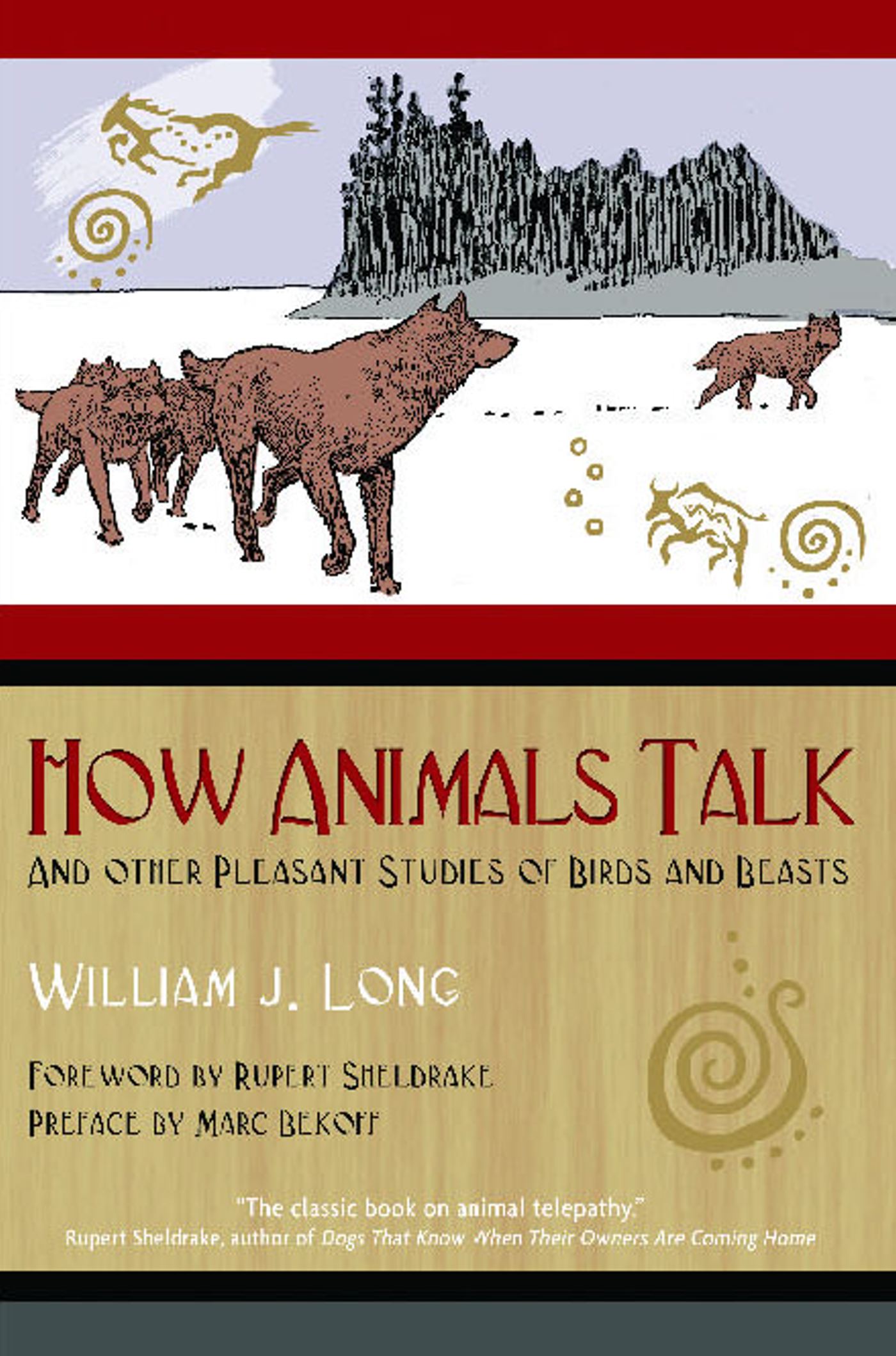 • Based on years of detailed field observations, first published in 1919

• Forewords by biologists Rupert Sheldrake, who has spent 15 years researching the unexplained powers of animals, and Marc Bekoff, the editor of the three-volume Encyclopedia of Animal Behavior

Many sources have commented on the silent communication abilities of pets, but never before and not since the first publication of this book in 1919 has the subject of animal telepathy in the wild been so fully researched. How Animals Talk explores the phenomenon of vocal, silent, and even motionless communication among animals. From crow talk to instant herd communication, author William J. Long theorizes that animals are much more intelligent, emotional, and moral than we have traditionally thought and that their ability to sense the presence of other living beings is an innate ability shared by humans as well. Based on many years of field observations, this classic text contains numerous examples of animal behavior that defy conventional explanation.

Long believed in the importance and validity of anecdotal evidence. He recognized the dangers of conventional research in reducing animals to mere numbers and how the cold third-person prose of scientific study can objectify animals, distancing "us" from "them." His findings on the impact of our presence on animal life--and the cost that we pay in separating ourselves from animals, who help define our place in the natural world--may be more relevant today than ever before.

I am sometimes asked, "What is the most interesting thing you find in the woods?" the question calling, no doubt, for the name of some bird or beast or animal habit that may challenge our ignorance or stir our wonder. The answer is, that whether you search the wood or the city or the universe, the only interesting thing you will ever find anywhere is the thrill and mystery of awakening life. That the animal is alive, and alive in a way you ought to be but are not, is the last and most fascinating discovery you are likely to make in nature's kingdom. After years of intimate observation, I can hardly meet a wild bird or beast even now without renewed wonder at his aliveness, his instant response to every delicate impression, as if each moment brought a new message from earth or heaven and he must not miss it or the consequent enjoyment of his own sensations. The very sleep of an animal, when he seems ever on the thin edge of waking, when he is still so in touch with his changing world that the slightest strange sound or smell or vibration brings him to his feet with every sense alert and every muscle ready--all this is an occasion of marvel to dull men, who must be called twice to breakfast, or who meet the violent clamor of an alarm clock with the drowsy refrain:

Yet a little sleep, a little slumber,
A little more folding of the hands to sleep!

You will better understand what I mean by the animal's aliveness, his uncloying pleasure in the sensation of living, if you can forget any tragical theories or prejudices of animal life which you have chanced to read, and then frankly observe the first untrammeled creature you meet in the outdoor world. Here at your back door, for example, is a flock of birds that come trooping from the snowy woods to your winter feast of crumbs. See how they dart hither and yon between mouthfuls, as if living creatures could not be still or content with any one thing, even a good thing, in a world of endless variety. Look again, more closely, and see how they merely taste of the abundance on your table, and straightway leave it for a morsel that the wind blows from under their beaks, and that they are bound to have if it takes all winter. Every other minute they flit to a branch above the table, look about alertly, measure the world once more, make sure of the dog that he is asleep, and of the sky that it holds no hawk; then they wipe their bills carefully, using a twig for a napkin, and down to the table they go to begin all over again. So every bite is for them a feast renewed, a feast with all the spices of the new, the fresh, the unexpected and the adventurous in it.

Or again, when you enter the wilderness remote from men, here is a fox, which seems to float along like thistle-down in the wind, halting, listening, testing the air-smells as one would appreciate a varied landscape, playing Columbus to every nook or brush-pile and finding in it something that no explorer ever found before.

I have on many occasions had the good luck to observe the silent communication that occurs between a mother animal and her young. I have spent hours by different fox dens and have repeatedly witnessed what seemed to be excellent discipline; but I have never yet heard a vixen utter a growl or cry or warning of any kind. That audible communication comes later, when the cubs begin to hunt for themselves; and then you will often hear the mother's querulous squall or the cubs' impatient crying when they are separated in the dark woods. While the den is their home silence is the rule, and that silence is most eloquent. For hours at a stretch the cubs romp lustily in the afternoon sunshine, some stalking imaginary mice or grasshoppers, others challenging their mates to mock fights or mock hunting; and the most striking feature of the exercise, after you have become familiar with the fascinating little creatures, is that the old vixen, who lies apart where she can overlook the play and the neighborhood, seems to have the family under perfect control at every instant, though never a word is uttered.

That some kind of communication passes among these intelligent little brutes is constantly evident; but it is without voice or language. Now and then, when a cub's capers lead him too far from the den, the vixen lifts her head to look at him intently; and somehow that look stops the cub as if she had sent a cry or a messenger after him. If that happened once, you might overlook it as a matter of mere chance; but it happens again and again, and always in the same challenging way. The eager cub suddenly checks himself, turns as if he had heard a command, catches the vixen's look, and back he comes like a trained dog to the whistle.

As the shadows lengthen on the hillside, and the evening comes when the mother must go mousing in the distant meadow, she rises quietly to her feet. Instantly the play stops; the cubs gather close, their heads all upturned to the greater head that bends to them, and there they stand in mute intentness, as if the mother were speaking and the cubs listening. For a brief interval that tense scene endures, exquisitely impressive, while you strain your senses to catch its meaning. There is no sound, no warning of any kind that ears can hear. Then the cubs scamper quickly into the burrow; the mother, without once looking back, slips away into the shadowy twilight. At the den's mouth a foxy little face appears, its nostrils twitching, its eyes following a moving shadow in the distance...
William J. Long

William J. Long (1867-1952) was an American United Church of Christ minister and a well-known naturalist of the early 20th century. He is the author of over 20 books, including School of the Woods, Secrets of the Woods, and Brier-Patch Philosophy.

"The classic book on animal telepathy."

– Rupert Sheldrake, author of Dogs that Know When Their Owners Are Coming Home

"William Long presages numerous areas that are 'hot topics' in the study of animal behavior and discusses a staggering array of animals. His refreshing and open view of animal behavior shows how much we really do know about animal emotions and consciousnesss when we open our hearts to the amazing and mysterious animal beings with whom we share the Earth."

– Marc Bekoff, editor of the three-volume Encyclopedia of Animal Behavior

"Keen observation, patience curiosity, and detailed descriptions are key to Long's anecdotal evidence about the behavior of various animals; wolves, mink, fox, and several variety of birds. His technique is exactly what has been advocated by field biologists today. Whether or not the reader agrees with him on the subject of animal telepathy, the book is full of insight that rings true for anyone who has lived with or made a study of the animal kingdom."

"In a time when the closest thing to reading natural signals is to correctly anticipate when the light will turn green, Long offers a refreshing visit to the natural world right outside your window."

". . . demonstrates a Gaian sensibility that will certainly resonate in the hearts and minds of modern pagans. . . . This book is highly recommended."