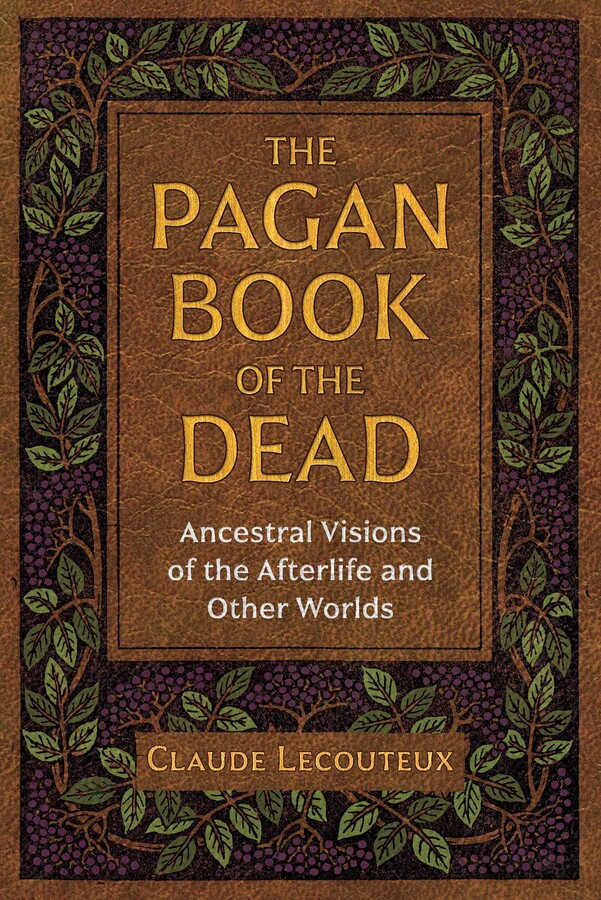 The Pagan Book of the Dead

Ancestral Visions of the Afterlife and Other Worlds

• Examines how ancient European cultures viewed the beyond, including the Blessed Isles of early Greek and Celtic faith, the Hebrew Sheol, Hades from Homer’s Odyssey, Hel and Valhalla of the Norse, and the Aralu of Babylon

• Connects medieval afterlife beliefs and NDE narratives with shamanism, looking in particular at psychopomps, power animals, the double, the fetch, and what people bring back from their journeys to the spirit realms

Charting the evolution of afterlife beliefs in both pagan and medieval Christian times, Claude Lecouteux offers an extensive look at the cartography and folklore of the afterlife worlds as seen by our ancestors. Exploring the locations and topographies of the various forms taken by Hell, Purgatory, and Heaven, he examines how ancient European cultures viewed the beyond, including the Blessed Isles of early Greek and Celtic faith, the Hebrew Sheol, the pale world of Hades from Homer’s Odyssey, Hel and Valhalla of the Norse, and the Aralu of Babylon, the land where nothing can be seen. The author also explores beliefs in Other Worlds, lands different from our own that are not the afterlife but places where time flows differently and which are inhabited by fantastic or supernatural beings such as fairies or dwarfs.

Sharing medieval tales of journeys into the beyond, Lecouteux shows how these accounts represent the first recorded near-death experiences (NDEs) and examines how they compare with modern NDE narratives as well as the work of NDE researchers like Raymond Moody. In addition, he also explores tales of out-of-body experiences, dream journeys, and travels made by a double or fetch and connects these narratives with shamanism, looking in particular at psychopomps, power animals, and what people bring back from their journeys to the spirit realms.

Analyzing the afterlife beliefs of the Middle Ages as a whole, Lecouteux concludes with a collection of medieval afterlife-related traditions, such as placing polished stones in the coffin so the departed soul can find its way back to friends and family at those times of the year when the veil between the worlds grows thin.

The cruel goddess Death is one of the major preoccupations of the living, even if we scarcely enjoy talking about her. She is omnipresent and every last one of us, sooner or later, will have to pay the toll nature asks of us. Death has been given several different names including that of demise, passing away, decease, and the Grim Reaper. It has been depicted with a scythe, a bow, a spear, and a violin made from a single bone. It is also portrayed as a skeleton digging its own grave, a hollow-eyed specter, or a hooded creature. It is female in the lands of the romance languages and male in those speaking Germanic tongues.

The dictionary carries a plethora of verbs to denote its action: depart, decease, disappear, expire, perish, pass away, succumb, die, and simply go out which smacks of the old myth of life being consumed like a candle. In the legend of Meleager, the Moirai predicted that his fate would be linked to that of an ember burning in the fireplace. If the ember was entirely consumed the child would die. In the Tale of Norna-Gest, written in thirteenth century Norway, one of the fairies presiding over the birth of the hero became angry and said: “I have decided that he shall live no longer than the time it takes for this candle next to him to be utterly consumed.”(2)

For those who know how to interpret them, there are many signs that herald death. To simplify matters a little, we know that everything that happens rarely is unusual, disturbing, distressing, and interpreted as an intersign depending on the circumstances.

On the other hand, in the Middle Ages we have the physical signs: someone destined to die soon is marked, and this notion takes various forms. In the chansons de geste and romances, a red cross appears on the clothing of the warrior for whom this will be his last battle. In Iceland there is an adjective, veigr, that notes without going into any further detail, that such and such an individual is imminently doomed to die.

“Now, my godchild, you are going to receive my baptismal gift. You will be the best of doctors thanks to the medicinal herb that I am giving you now. Pay close attention to what I have to tell you: every time that you are summoned to see a patient, you will see me. If I am standing close to his head, you can be assured that he will recover his health and you can give him a little of this herb. If he is destined to perish, I will be by his feet.”

The main lesson of the ancient texts is that death announces itself fairly often by phenomena that are interpreted in conformance with oral traditions and local beliefs. I am using the word “belief” here in the sense of an indemonstrable idea or fact that is accepted as true.

These phenomena are known as “intersigns.” While the collection of these has been most fruitful in Brittany, as is shown by one book by Anatole Le Braz(16) in the nineteenth century and another much more recent book by Bernard Rio,(17) it is important to note that every country and every province has its own intersigns. Everything that is uncustomary, unusual, disturbing, and distressing is interpreted as such in accordance with the circumstances. In ancient times, the illiterate had their own systems for deciphering the world, one that was based on analogies “which provided a hidden meaning to any reality or phenomenon of the world.”(18) This is how night birds such as owls and even diurnal birds like crows and ravens are often seen as messengers of death. The Grim Reaper therefore comes off as a living and perhaps even a benevolent entity since he takes the trouble to give a warning. But who is he warning? It is rarely the future deceased, more often his friends and family, but his omens are irrevocable, his law is absolute, and no one can escape his verdict.

Intersigns and tradition are the starting point for all speculations, and God only knows just how many there are! From the adepts of spiritualism who offer explanations of OBEs and NDEs,(19) to those who vouch for “trans-communication,” there are many seeking to pierce the mysterious veil. And are we not now living in a time where genetic research is dangling the hope for a longer life span before our faces? This is a strange resurgence of the Fountain of Youth and the elixir of eternal youth that pushes back the frontiers of death: anything but die! But it is not death that keeps people thinking so much as what comes after. This explains the belief in revenants who, when they appear before us, must answer the question: “How are things after you die?” In the texts collected by Leander Petzold, the response is unvaryingly: “Nothing is at all what I imagined it would be.”(20)

I am going to start with our legacy from Classical Antiquity, mythology, and legends, then we shall study their impact on the literature of revelations. Next we will look at what the chivalrous romances owe to them and travel on the roads of the Other World, not to mention the traveler’s tales from this ineffable space, that have come down to us through folk tales and folk songs. We will end by comparing these trips into the afterlife and into the Other World with experiences of imminent death.
Claude Lecouteux

“The Pagan Book of the Dead travels on the roads of the Other World, not to mention the traveler’s tales from this ineffable space, that have come down to us through folk tales and folk songs. The book ends by comparing these trips into the afterlife and into the Other World with experiences of imminent death…The Pagan Book of the Dead is an extensive look at the cartography and folklore of the afterlife worlds as seen by ancient European Cultures.”

"This book sought to satisfy the deepest curiosities. I’d recommend this to anyone, but especially the witch trying to cross reference the knowledge of your path, the new witch being bombarded with hearsay, and the wise wizard who literally wants to know everything. This book dives deep, and not only deals with stories of death from antiquity, but also address near death experiences from present day. If a Bible were to allow information to be added, this could be a book of death, it is aptly named, The Pagan Book of the Dead."

The Pagan Book of the Dead

Ancestral Visions of the Afterlife and Other Worlds