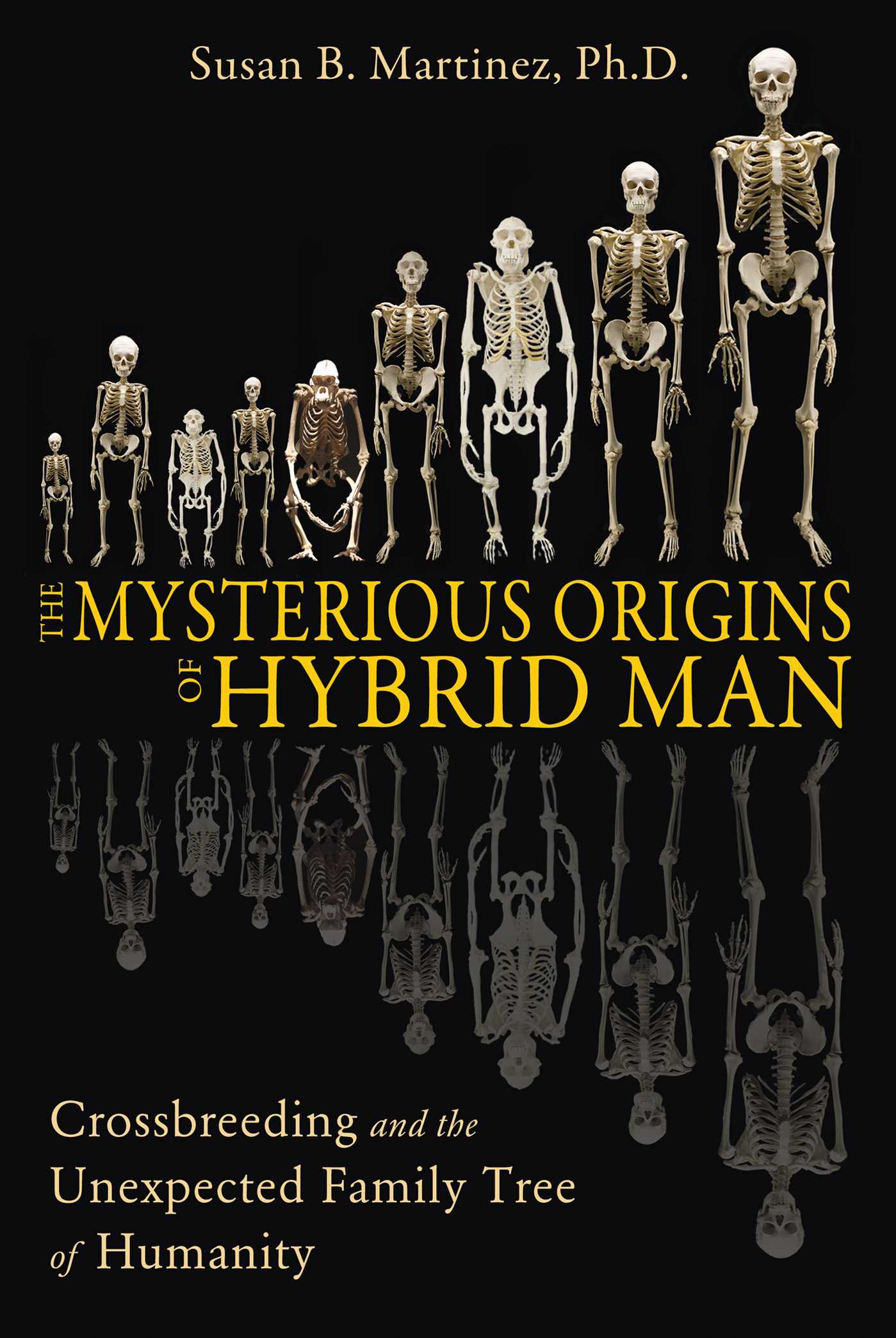 By Susan B. Martinez
LIST PRICE $18.99
PRICE MAY VARY BY RETAILER

A provocative challenge to Darwin’s theory of evolution

• Shows there is no missing link because the human race, since day one, is the result of outright interbreeding among highly diverse types

• Explains Homo sapiens’ mental powers (the Great Leap Forward) and how we acquired the “blood of the gods,” which endowed us with a soul

Did we evolve from apes, or are we all descendants of Adam and Eve? Why is the “missing link” still missing? Is the dumb luck of natural selection valid?

Piecing together the protohistory of humanity through anthropology, genetics, paleolinguistics, and indigenous traditions, Susan B. Martinez offers an entirely original alternative to Darwin’s evolution: Modern humanity did not evolve but is a mosaic of mixed ancestry, the result of eons of cross-breeding and retro-breeding among different groups, including Cro-Magnon, Neanderthal, hobbits, giants, and Africa’s “Lucy” and “Zinj.” Martinez shows that there were multiple “Gardens of Eden” and how each continent had its own blend of races prior to the Great Flood, which caused the diaspora that brought a renaissance of culture to every division of the Earth.

Martinez explains Homo sapiens’ mental powers (the Great Leap Forward) in cosmological terms--how we are the product of both heaven and earth. She identifies the “Sons of Heaven” and the angel-engendered races, explaining how Homo sapiens acquired the “blood of the gods,” which endowed us with a soul. Providing the ultimate resolution to the Evolution versus Creationism debate, this landmark study of hybrid man justifies his unexpectedly sudden appearance in the fossil record, the curious parallels between oral histories of the world’s people, and why anatomically modern features are found in the earliest paleontological evidence.

We live in an age when the truth will out, perhaps even more than we bargained for, bubbling to the surface in unexpected ways. For forty years I have sat by and kept my mouth shut, knowing my confreres in anthropology were not doing justice to the story of man’s extraordinary origin. I had to go off the reservation to find out for myself if we are really just apes who acquired culture and a great brain. Recently, in the course of writing about the little people (homo sapiens pygmaeus) in The Lost History of the Little People, the house of cards called human evolution came tumbling down on my head. I knew I could not turn back: I had to write about man--the hybrid. This then is his checkered history.

Right away I must insert a disclaimer: this book is not concerned with biological evolution, only the ascent of man, who is of course a zoological entity (corporeal) but at the same time something more than an animal (something incorporeal), in a class by himself, a separate kingdom. So let us ask: are we really ex-mollusks, ex-starfish, ex-trilobites?

The VIPs of evolution disagree about almost everything except evolution itself. It seems the extent of quibbling is proportionate to its ill-founded premise. Almost every “important find” is contested amidst a maelstrom of conflicting fossil information. One new fossil find and everything gets reclassified. What this means is that there exist no clearly defined taxa in the whole of human evolution. And for a good reason: all the overlapping among these types of fossil men (erectus, sapiens, Neanderthal, etc.) is due not to evolution but to hybridization. Taxonomy doesn’t stand a chance in the face of the ongoing amalgamations that this book is about. The fossil record is an unsolvable puzzle of mosaics--each hominid type possessing hopelessly mixed racial traits.

I start this book on the premise that people (the races of man) don’t, didn’t, can’t, and couldn’t change or evolve to become something else. Notwithstanding hypothetical family trees and even more fanciful common ancestors, the question of origins today remains completely unsettled and open to interpretation. What evolutionists call change is simply the result of comingling--different races mixing genes.

It is man’s ideas that have evolved.
--Loren Eiseley, The Immense Journey

I don’t believe in physical evolution; our real evolution is in mettle, ethos, character. In A Path of Light, George Morley of the Kosmon Church in England put it this way:

There have been times when Man was more advanced than today. . . . In the civilizations of the ancient Egyptians and Persians, and earlier still on the grand continent which sank beneath the Pacific (Pan), we see great knowledge and wisdom, when men had understanding of the gods. . . . Then what is it that has advanced? It is the conditions of life . . . the ordinary comforts. . . . But it must ultimately come about that there will be a spiritual apotheosis to which Man will attain.

Human history is a “process of ascent to godhood,” wrote John W. White, educator and researcher in the fields of consciousness and higher human development. “Cro-Magnon are distinguished from Neanderthal not so much by physical body design as by their greater intelligence which resulted in the world’s first art, statuary, engravings, music, personal ornamentation, star charts . . . [and] more highly developed social systems. Altogether they showed a superior degree of consciousness.”

One European critic thought that “one day the Darwinian myth will be ranked the greatest deceit in the history of science.” The interpretation of fossil evidence (exclusively) by convinced evolutionists should, thought attorney Philip Johnson, be “scrutinized as carefully as a letter of recommendation by a job applicant’s mother.” If evolution were actually on trial, its mountain of circumstantial evidence, complicated jargon, and factoids would be bounced out of court by an annoyed judge. Darwinism today rides on its reputation. Not on its truth.

The disproving of evolution has already been done--many times! And well done!--by biologists, mathematicians, lawyers, Christians, prehistorians, science writers, and even paleontologists. But a real meaty alternative remains to be offered. If anything, Darwinism has succeeded by default. An alternative comes to life in these chapters, which present our two common ancestors, Asu and Ihin. These races mingled to produce a third, the Druks (erectus).

We have a lot of ground to cover and missteps to unravel: To begin with, it took many decades for scholars to finally admit that supposed “ancestors” were actually contemporaries. Then more decades elapsed before it was conceded that those contemporaries (living side by side) actually interbred, producing the entire pantheon of hybrids known to us as “the fossil record.”

Read any scientific book about the races in today’s world, hardly a page goes by without mention of admixtures, crossings, half-breeds, etc. It was the same in the ages of the past. Hiding in plain sight is the all-too-human factor of these mergers, what archeologist Christopher Hardaker whimsically calls “the nookie factor.” The nookie factor actually stands Darwinism on its head. While evolution has species lines branching out and separating (splitting) at some time in the distant past, the cross-breeding factor entails quite the opposite--the different stocks coming together, cohabitating to form new races. We are all hybrids. Here’s the nub of this book: fossils interpreted as representing “stages” of evolution or “changes” by mutations are herein shown to represent nothing more than the unstoppable intermixing of the Paleolithic races. Man the Mixer is our constant theme. The peopling of the world, as drawn in these chapters, is about the mingling and merging of disparate types. No evolution there, just the continual confection of halfbreeds, quarter-breeds, etc.--an exchange of genes since day one.
Susan B. Martinez

"Martinez’s innovative and scalpel-like research upends the academy’s cherished (but clearly warped) perspectives on evolution and humanoid history. Her research reveals the flimsy establishment arguments for accidental mutation as the cause of speciation. Interbreeding of quite different early and contemporaneous subspecies is the most plausible explanation for the variety of modern races and genotypes."

"Susan B. Martinez, Ph.D., has given all those who ponder the origins of humankind an extraordinary gift of remarkably thorough research. Martinez deftly weaves the progress of our hybrid species as a co-product of mixed earthly ancestry and the ministry of the ‘gods,’ the heavenly visitors. This remarkable book offers an extensively developed thesis that profoundly offers an alternative to evolution."

– Brad Steiger, author Worlds Before Our Own and Conspiracies and Secret Societies: The Complete Dossi

“From the evolution of human mental powers to how the human soul evolved, this is a specific and involving analysis from an anthropology doctor, and will delight any new age reader and collections catering to them.”

By Susan B. Martinez
LIST PRICE $18.99
PRICE MAY VARY BY RETAILER