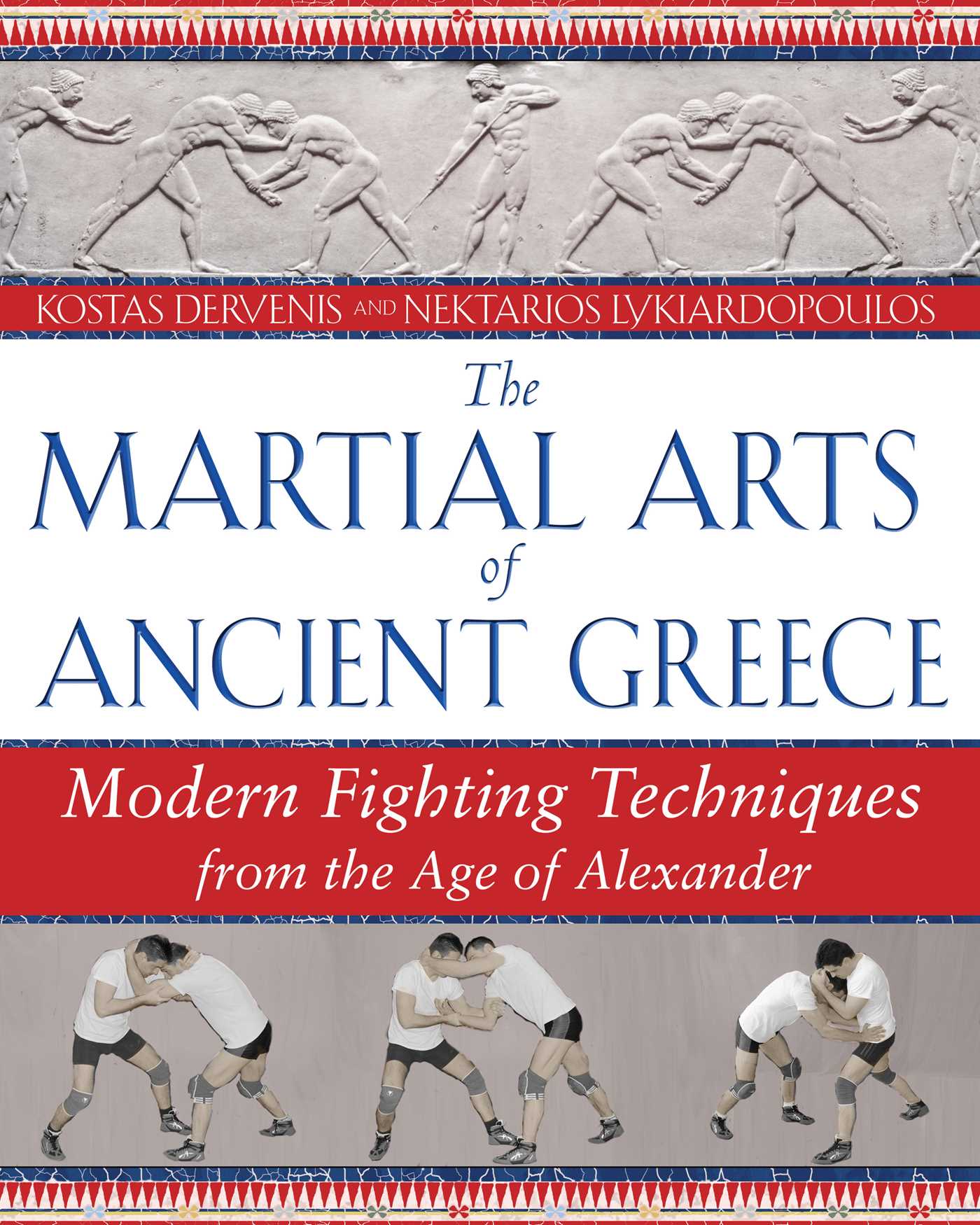 The ancient friezes and decorative motifs of ancient Greece contain abundant scenes of combat, one-on-one and hand-to-hand. In The Martial Arts of Ancient Greece, the authors offer close inspection of these depictions to reveal that they exactly correlate to the grappling and combat arts as they are practiced today. They also show that these artifacts document the historical course of the development of both the weaponry of the warrior classes and the martial responses those weapons required when fighting hand-to-hand.

The depiction of each ancient technique is accompanied by sequenced step-by-step photos of modern practitioners performing the various stances of one-on-one combat. In addition, the authors explain how the development of Hellenic combat arts was tied at its heart to a spiritual practice. The centeredness, clear mind, and consequent courage that develops from a spiritual practice was considered a martial strength for a warrior, enabling him to be at his best, unobstructed inwardly by conflict or inertia. The Martial Arts of Ancient Greece provides a practical and comprehensive approach to the techniques and philosophy of the martial arts of the ancient Mediterranean that will be welcomed by modern fighters.

In this chapter we shall present a technical analysis of the kinesiology as well as the technique of dueling contests of the martial arts of the ancient Mediterranean world. As elsewhere in this book we shall use the Greek words pankration and pammachon to refer to these games and techniques, respectively, as the Greek word pankration is known worldwide. Pankration as a concept is a battle for submission, while pammachon corresponds to martial arts in general.

The battle zones are distinguished by the distance between the fighters and the techniques that are applied. In pankration there are 4 battle zones:

1. Kick Zone: range about 1.5 meters, where kicks are exchanged.
2. Boxing Zone: approximately 1 meter, where hand blows are dealt.
3. Entrapment Zone: about 0.5 meter, where there are limb and body holds with pulling and pushing. In this zone there are also knee, elbow, and head blows included.
4. Wrestling Zone: less than 0.5 meter, where, after capturing or engulfing the opponent, there are holds, throws, overthrows, and submission-immobilization of the opponent.

During the Roman Empire, athletes belonged to professional clubs, which were professionally oriented. This is the period of specialization of the athlete and the technique of the game.

We have already mentioned that the “skamma” was a factor that restricted the mobility of the athletes in a linear direction, decisively influencing the kinesiology of pankration. Considering the presentations on pottery, we can see that in pankration and pammachon there is one kind of kick: the front kick to the body or the legs of the opponent, never to the head.

Ancient Greeks, for example, were realists and knew the way pankration was practiced in Olympia should be the same as on the battlefield. The same goes for all Mediterranean peoples. Therefore, head kicks and a few more kinds of kicks were excluded from their martial arts and their fighting contests. Not because of lack of knowledge--we have reports of such kicks in contests--but because athletes could easily neutralize such a risky kick and take advantage over an opponent who would dare such a kick. So, in the kick combat zone, the front kick prevails, but only under certain conditions, as we shall proceed to explain. A basic factor in favor of the front kick is the minimal risk it entails for the athlete executing such a kick because he can maintain his balance and a confronting erect position toward his opponent.

In figure 25, the athlete on the left has held his opponent’s leg while he was attempting a kick. The entire technique could be interpreted as a contemporary application, which follows.

The athlete on the left is under attack.

He holds the offensive leg of his opponent.

With a suitable move of his arms and his body, he causes his opponent to lose his balance and drops him on the ground, still holding his leg.

From this position he can easily apply a leg lock with a very painful effect to the spine (not advisable because it is very dangerous).

The blows exchanged by pankration athletes, relating to punches, are not the same as those in boxing. The difference is that in pankration punch blows are dealt from a longer distance than those in boxing contests. When athletes came close to each other, they aimed at holding each other, which does not occur in boxing. Pankration athletes in the close-up combat zone were trapping their opponents’ limbs or essaying body holds in order to continue the fight on the ground.

Due to the special characteristics of punch blows and by observing various presentations, we can see that a direct punch blow in pankration is quite different from such a blow in the game of boxing as far as the related technical characteristics are concerned. To be more specific, to gain power at the point of impact, as an athlete’s aim was one powerful blow instead of many fast blows, he would “arm” his hand high up behind his head, with his upper arm almost parallel to the ground! This move has its merits and is derived from the battlefields: it is the pricking of the enemy with a spear.

As the main weapon of fighters in those times was the spear, the muscle development of the trainees in this kind of offensive is almost inconceivable today because we do not use this move. The preference for this move, pricking with a spear, is shown in presentations in the archaeological archive, even in presentations of knife fights, fighting against an animal or in a duel, where one might expect to see a low fight.

It is possible that the same technique was used in boxing but in some cases only and it was not the rule. In the game of boxing, the combat zone was determined (only punch blows) and the aim was different: many continuous blows against the opponent. According to the rules, a boxer could not hold his opponent or use any other method except to avoid or defend against blows using his hands. So, in the game of boxing, because punch blows should be delivered fast and the athletes should look after their defenses, their position became more closed in and their hands were placed closer to their bodies and heads for protection.
Kostas Dervenis

Kostas Dervenis is a martial arts instructor in jujutsu, pammachon, and t’ai chi chuan. He has written four books on the martial arts and martial traditions, including Nei Kung and The Magus of Java under the pen name Kosta Danaos. He lives in Athens, Greece.

Nektarios Lykiardopoulos has a degree in physical therapy and is certified as an instructor in a number of martial arts practices. He began studying martial arts and combat sports in 1983 and has been a member of the Technical Committee of the Hellenic Pankration Federation since 1999. He lives in Athens, Greece.

“Straightforward and insightful, a refreshingly commonsense approach to the truths hidden within both history and mythology. This is an in-depth piece of research revealing a timeless wisdom and the universality of personal experience. A must-read for all those interested in the roots of our martial and spiritual traditions.”

– William Gleason, 6th dan, director of Shobu Aikido in Boston, and author of The Spiritual Foundation

" . . . [The authors'] purpose for this volume . . . is an exploration of ancient combat systems for the sake of helping solve modern global problems. . . . an extremely enlightening book"

"Any in-depth collection strong in martial arts history needs The Martial Arts of Ancient Greece: a survey of early hand-to-hand combat and a comparison to how they are practiced today."

"Only a couple of decades ago, if one spoke about martial arts, it went without saying that they were referring to Asian combat systems. . . . While it is true that most martial systems in existence today are of Eastern origins, increasingly more information is emerging about the martial traditions of the west. . . . an extremely enlightening book.

"[Dervenis and Lykiardopoulos] do a creditable job of linking the Olympic sport that many warriors know and love now with the hand-to-hand combat training and applications depicted by works of ancient Greek art."

"Using archeological finds, architectural friezes and decorative motifs of ancient Greece, the authors have demonstrated the actual methods of grappling and close combat they demonstrate and how they are practiced today. Photos illustrate each step as well as the history and theory being presented."

– Institute of Hermetic Studies, May 2008

"The conclusions reached by the authors about the evolution and similarities of ancient combat are balanced and well sourced."

– Michael Rosenbaum, author of Kata and the Transmission of Knowledge in the Traditional Martial Arts,