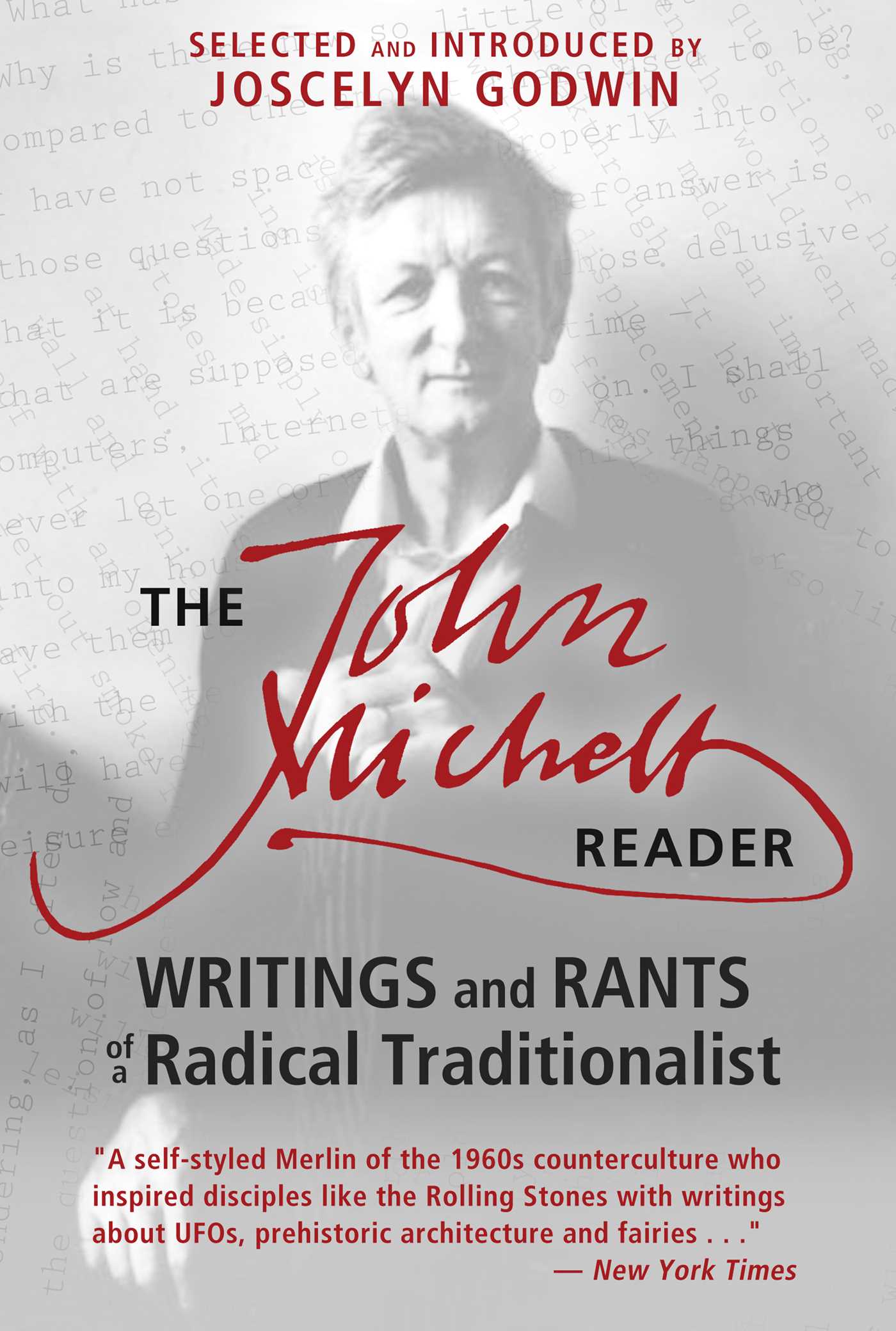 Deepest thoughts and musings of a 1960s countercultural icon

• Includes 108 of Michell’s most insightful, erudite, witty, and occasionally scathing essays on diverse topics ranging from sacred practices of the Stone Age to the evils of the metric system to the madness of modernity

• Describes principles to live in tune with the divine order of the world and discover the “paradise of the philosophers” of ancient times.

A countercultural icon of the 1960s, John Michell (1933-2009) was perhaps best known for his books on sacred geometry, Earth mysteries, and unusual phenomena. He was also beloved and reviled for his radical, idealistic, yet classically traditional views on a wide range of heretical topics, from sacred practices of the Stone Age to the evils of the metric system to the madness of modernity and the unfolding apocalypse.

Carefully selecting 108 of Michell’s most insightful, erudite, witty, and occasionally scathing essays from his column in the monthly magazine The Oldie, esoteric scholar Joscelyn Godwin presents a colorful collection of Michell’s writings and rants that cover nearly every aspect of society, history, and traditional wisdom. In these short essays, Michell takes on agribusiness, Darwinism, superstition, Stonehenge, the insanity of modern society, UFOs, Jesus, fairies, the Grail legend, among many other topics. No matter how small the topic under consideration, Michell always takes a larger view on it, illuminating it with light from above.

Godwin’s artful selection and ordering of essays reveals Michell’s overarching grand view of the world at large. We glimpse the heart of Michell as idealistic Platonist and radical traditionalist, absorb his common sense lessons for living in tune with the divine order, and are reminded that the elusive “paradise of the philosophers” of ancient times is still within reach for those with the strength of vision to see it.

It is not too much to say that John Michell was a prophet. Prophets do not foretell the future so much as warn what may come to pass if events continue on their present course. Nowadays this is so blindingly obvious that we hardly need prophets to tell it to us. But there is a rarer prophetic gift, which is the seeing of forms in what Plato called the World of Ideas--not the imaginary ideas of men and women, but the divine or daemonic ideas after which the material world is formed. Ezekiel saw the Chariot of the Most High; John the Divine saw the New Jerusalem; Mohammed in his night-journey passed through the planetary spheres and met the other prophets of his lineage. Such visions may be warnings too, but they also inspire confidence in the meaning and goodness of the cosmos; they enable us to imagine Paradise here and now, and to adjust our lives in harmony with it.

John Michell’s other role was that of a guardian of tradition and its defender against the “new men” who mistrust everything ancient, beautiful, or suspect of elitism. These tinpot emperors come in for a sound chastisement in these pages, and it is not sheer malice to enjoy hearing someone shout that they are stark naked. The tradition that Michell defends has always been elitist, but not in the sense of favoring birth, money, or even brains. Instead, it fosters the quality, in every sphere, of being truly and comfortably what one is. In this sense, those who live by cultivating the land or by the careful work of their hands are more deserving of respect than media stars (even royal ones) or socialites. Moreover, Michell has a particular empathy for those at the bottom of the ladder, who might have found their place in a more traditional social order but whom present-day conditions have made outsiders.

5
Staying Put and Rushing About
March 2001

My grandmother used to say, “You young people are so restless, always rushing about from here to there. When we were girls it was so lovely at home that we never wanted to leave, even to get married.”

It is true that we were always rushing about, in dangerous motor cars, with desperate episodes of drunken driving. I shudder now to think of it. In Granny’s youth there were no motors, so staying put was the normal thing in the country. But later it became a sort of disgrace, and now everyone keeps going away, rushing about in planes and boasting about their constant, far-flung travels as if there were virtue in their restlessness.

Americans are at the forefront of this movement--they are said to move house on average every three or four years--but all our colonials are the same. Unable to settle properly in the lands they took from the natives, with no traditional ties to the landscapes they were born in, they are condemned to wander, and that is why we have the pleasure of so many overseas visitors each year.

A few generations ago, when the enchantment of old England still lingered in country districts, most villagers had never been farther than the local market town, and many had never set foot outside their own parish. It was like in that Chinese poem about the idyllic community, where nothing unusual ever happened, where it was so quiet that they could hear dogs barking in the next village, which none of them had ever gone to.

One of my hobbies is collecting examples of good people who have enjoyed long lives, happy and complete, while scarcely moving an inch from where they were born. It began during the Falklands war, when a reporter said that he had met islanders in the outlying “campo” who had never been to the capital, Port Stanley, in their whole lives. Then, in the way these things happen, I heard from another journalist something even more extraordinary, that on the island of St. Helena, which is only ten miles across at most, there were rustics who had never been to their only town, Jamestown.

Best of all was the example of staying put which I came across in a book about the Faroe Islands by two highly informed and entertaining subarctic women, Liv K. Schei and Ounnie Moberg (they also wrote the best modern book on Shetland). On the remotest island of the Faroes, Fugloy, barely two miles long and with two small villages, they heard of a woman who lived in one of the villages and had never bothered to visit the other one. Nor had she ever left the island. On her seventieth birthday the treat she asked for was to be shown the next village. It was a few minutes’ walk and she thoroughly enjoyed the novelty.

A traditional view of such lives is that they are compensations for hyperactivity in a previous existence. At the end of Plato’s Republic is a description of souls destined for rebirth, where each was allowed to choose the pattern of its next life. The foolish among them grabbed lives of wealth and power, only to find too late that they ended nastily. Among the last souls to pick a life was Ulysses, whose former career was of constant rushing around. Most of the lives had gone, but thrown away in a corner he found the life of a quiet, retiring country gentleman. That, he said, would have been his choice if he had had first pick. So in one life you rush around and in the next you stay put.

That is only a story, but it is the best one you are likely to find that accounts for the coexistence in human nature of those opposite types that you see in children, the one who sits there happily and the one who simply cannot keep still.
John Michell

“A self-styled Merlin of the 1960s counterculture who inspired disciples like the Rolling Stones with writings about UFOs, prehistoric architecture and fairies . . .”

“In this interesting collection, full of memorable details, John Michell commits many charming acts of political heresy against the received wisdoms of contemporary life, advocating by example where freedom still resides.”

– Richard Heath, author of Sacred Number and the Lords of Time

“Joscelyn Godwin has shown exceptional empathy with Michell’s worldview in his judicious arrangement of the writings.”

– Patrick Harpur, author of The Secret Tradition of the Soul and The Philosophers’ Secret Fire

“Refreshingly original, yet genuinely grounded in tradition. John Michell is wise, mischievous, and amusing. He has expanded the frontiers of British sanity and enriches the lives of those who know him and his works.”

“Forget trepanning, John Michell opened my third eye years ago. His revelations and the mysteries he touches upon are in my head forever--life would be dead dull and probably impossible without this extra and true dimension.”

– Candida Lycett Green, coauthor of The Garden at Highgrove