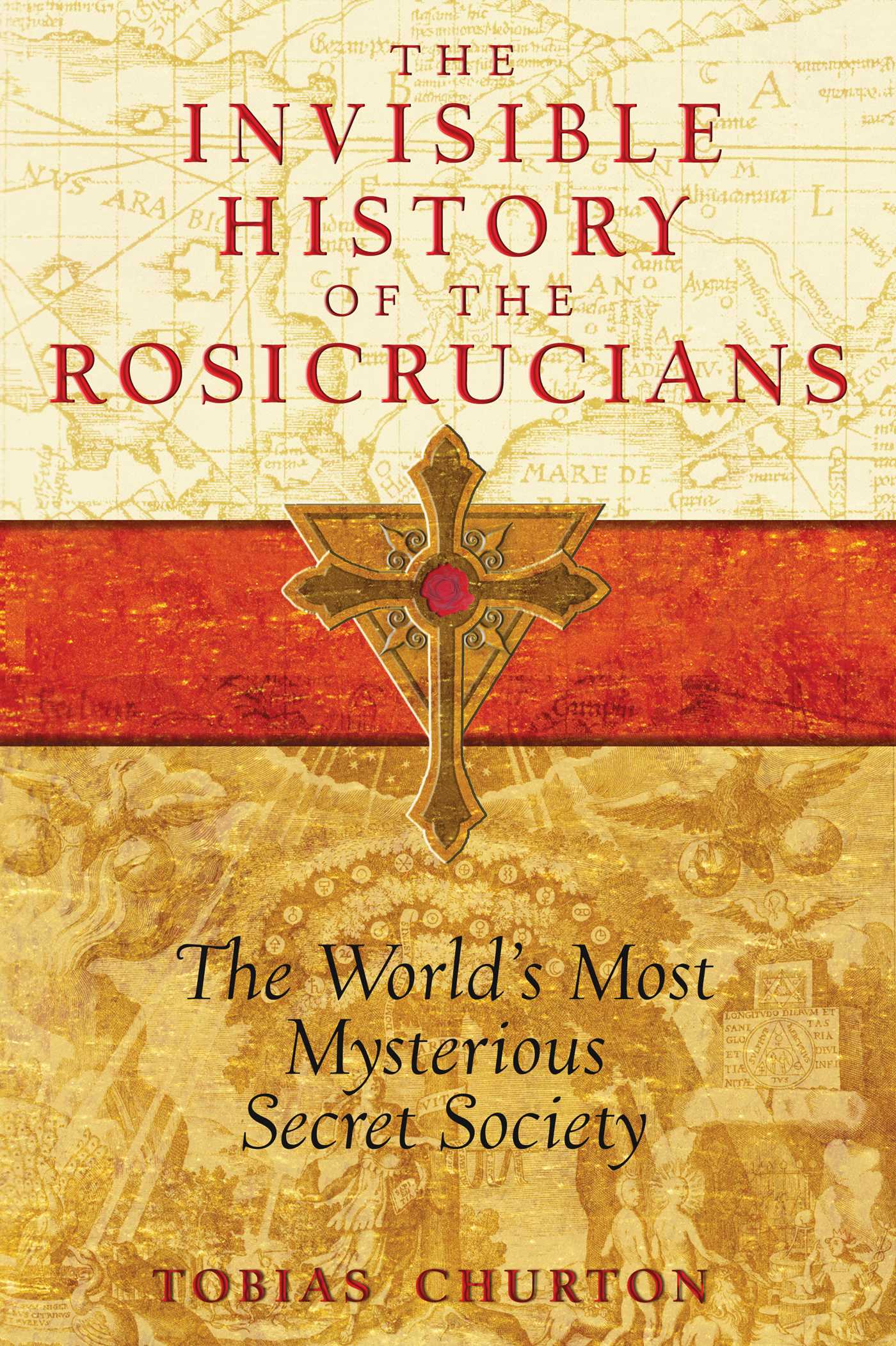 By Tobias Churton
LIST PRICE $14.99
PRICE MAY VARY BY RETAILER

• Contains the latest research on the origins of the Rosicrucian movement

• Presents the ties between Rosicrucianism, Freemasonry, and the Templars

• Written by a “perfected” Knight of the Rose Croix and the Pelican (18th degree, Ancient and Accepted Rite)

For nearly 400 years, incredible myths and stories have been woven around the “invisible” Brothers of the Rose Cross, the Rosicrucians. It is said that they possessed the secret of man and God, that they could turn lead into gold, that they governed Europe in secret, that theirs was the true philosophy of Freemasonry, and that they could save--or destroy--the world. In The Invisible History of the Rosicrucians, Tobias Churton, a “perfected” Knight of the Rose Croix and the Pelican (18th degree, Ancient and Accepted Rite), presents the first definitive historical and philosophical view of this mysterious brotherhood.

Starting at its beginnings in Germany in 1603, Churton unveils the truth behind the complex story that underlies the Rosicrucian movement. He explains its purpose, the motives of its earliest creators, and the manifestos “accidentally” published in the 17th century that emerged at precisely the time when modern science was emerging. He details the people who influenced its development--including Johannes Kepler, Robert Fludd, and Sir Francis Bacon--and the ties between the Rosicrucians, Freemasons, and Templars. He also shows how Rosicrucianism shaped the mythology and spiritual consciousness of both North and South America and reveals that there are many Rosicrucian fraternities still active throughout the world today.

Not everyone greeted the Invisible Ones with the salivating relish of a yellow journalist in a vulgar Sunday newspaper. Another anonymous writer of 1623 penned a document entitled Recherches sur les Rose-Croix (Researchers into the Rose Cross), now in the Bibliothèque Nationale:

The Rose Cross is an imaginative invention of a group of persons who use it as their symbol and mark. Besides this it means nothing. They claim that an ancient wisdom has been transmitted from Adam through Seth, Noah and Moses to Solomon, and that this wisdom was revealed by the Arabs to the foreigners in 1413. . . . It has seen been preserved in obscure terms by the alchemists Basilius Valentinus, Theophrastus, Isaac the Hollander, Severinus Danus, Paracelsus, Raymond Lull, Valentin Conrad, and Robert Fludd. . . .
Their religion is drawn exclusively from Genesis, from the book of Wisdom, and the Psalms of David, but they approach them with a formal conception to create a semblance that these great personalities wrote only to justify their own belief. In this endeavour they are greatly assisted by their knowledge of the roots of languages.

Whether the Brethren of the Rose Cross were in fact devil worshippers or, as the author of the above study maintained, “Protestant monks, formerly of the Cistercian order, who live on a rock on the shores of the Danube in an almost inaccessible place,” fraternization with their beliefs or literature incurred dire consequences.
Three years before the Invisibles were supposed to have floated about Paris, two students of Marburg University in Hessen, Philipp Homagius and Georg Zimmerman, were tried by the university. Homagius was accused of burning all his books except his Rosicrucian works and a magical textbook attributed to “Arbatel.” Homagius was sentenced to “eternal imprisonment” in a frontier fort.
Meanwhile, the University of Paris condemned all works by, or inspired by, Paracelsus--and that included “Rosicrucian” works as a matter of course.
In the same year as the Paris scare, “Rosicrucian” defender and mathematician Heinrich Nollius was expelled from the University of Giessen for his professional interests in sacred magic and Hermetic philosophy. Two years later he would try to form a new group “the keepers of the celestial wheel.”
In 1624, a year after the Paris scare, catholic authorities at the University of Leiden in the Netherlands set up a tribunal to try Rosicrucian writings. The Leiden trials would be followed in Haarlem in 1627 by the trial, torture, and imprisonment of a sometime-pornographic artist, Jan Symonsz van der Beek. According to Susanna Åkerman, the Leiden judges “correctly saw that the Rosicrucian fiction stemmed from Arabic magic, from Hebrew wisdom, and from dangerously subversive Paracelsian themes.”
That is quite a case for the prosecution. So the Rosicrucian beliefs were a fiction? Why then were people all over northern Europe and elsewhere getting into trouble for paying attention to a fiction? It is not as if they did not have novels in the seventeenth century. They knew the difference between a novel and a serious book. What was it about this fiction that was causing so much trouble?
Were the Invisibles real, or were they . . . invisible, that is to say, imaginary?
Who were they? Would one of them stand up and be counted? People were, after all, suffering in their name. Even where it was not physically dangerous, mere rumor of association with the Brothers of the Rose Cross could make life very inconvenient.
Take the case of (now) world-famous philosopher, René Descartes. According to Adrien Baillet’s biography, Descartes returned to Paris from his travels with the Duke of Bavaria’s army in 1623, only to find the Rosicrucian scare in full force. In fact, Descartes had vainly sought the Brothers of the Rose Cross in the winter of 1619, hoping for help with his internal struggles and obscure mathematical studies. (The Brothers of the Rose Cross had promised a new mathematics.)
A year later, Descartes had met up with an excellent mathematician, Johann Faulhaber, whose less advanced ideas inspired Descartes to new heights of original genius. Faulhaber had been an early defender of the mysterious Brothers, having responded eagerly to their promise of a reformed science.
Descartes was unlikely to have swallowed the calumnies about satanic brethren invisibly subverting the capital, but he took seriously the advice given him that he was a potential suspect, having appeared alone, and from Germany--and doubtless being a mathematician and philosopher too. Should he hide? No, he concluded. He made himself visible about town. How, he reasoned, could anyone suspect he was a Brother of the Rose Cross? Had not everyone heard? The infernal brethren were invisible!
Furthermore, he reasoned, having sport with the credulous inquiries of friends, it was that very invisibility that must have prevented his finding the fraternity in Germany!
It is good to know the philosopher had a sense of humor; there are not many laughs in his Discourse on Method.
What were people afraid of? Why were even the more enlightened writers, such as Descartes’ mentor Father Marin Mersenne and well-informed commentator Gabriel Naudé, so suspicious? What had the Brothers of the Rose Cross done?

In order to find out how such a powerfully subversive group of conspirators had come out of nowhere, only to manifest themselves without manifesting themselves, only to be seen in the imagination while remaining distinctly and indistinctly invisible--only to be dismissed as harmless by some, yet perceived by others as a threat to the stability of the whole catholic world (and all in the space between two celestial conjunctions), we need to go back to the beginning of what Simon Studion thought (in 1604) was the end.
Tobias Churton

"There is a tendency today, fostered (in my opinion) by high-speed everything, to want to skim through things to get to the conclusion. This book is NOT amendable to such an attitude. The research behind it is meticulous. It is laid out in exquisite detail. It bears a thorough, close reading. . . . This work is eye-opening and, for those interested in the development of the Rosicrucian beliefs, a valuable resosurce."

"The mysterious story of Rosicrucianism, told through its dominant characters, reveals much that is significant with regard to all our pasts and much about ourselves, our truly human nature."

"The Invisible History of the Rosicrucians provides a fine history of secret societies and presents the first definitive, in-depth survey of these societies . . . "

"Perhaps the growing interest by the pubic in esotericism--and, indeed, Rosicrucianism--in recent years is a reflection of a deep desire to connect with something greater, with divine intelligence itself. Churton's book is both an education and a revelation."

By Tobias Churton
LIST PRICE $14.99
PRICE MAY VARY BY RETAILER