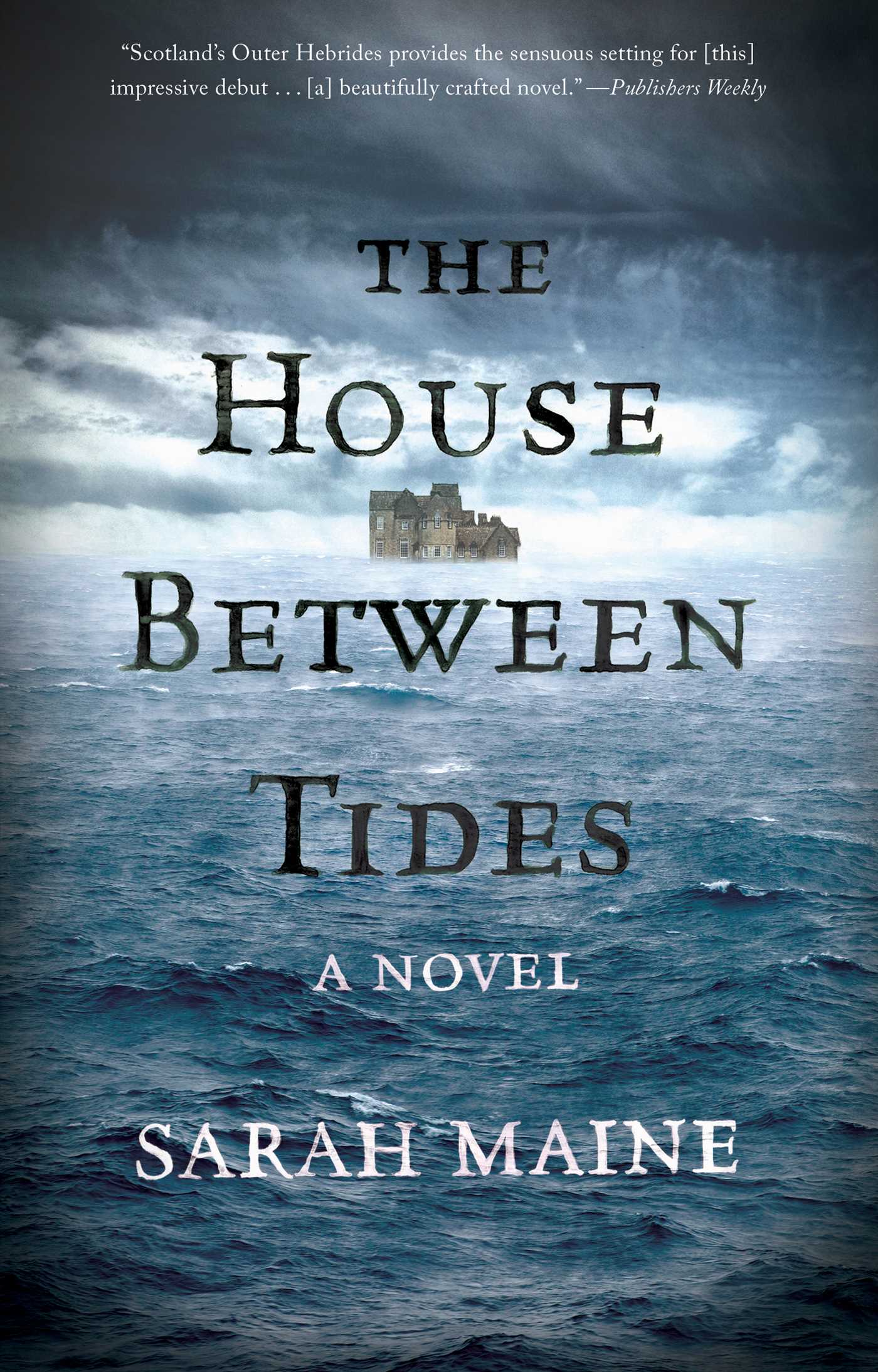 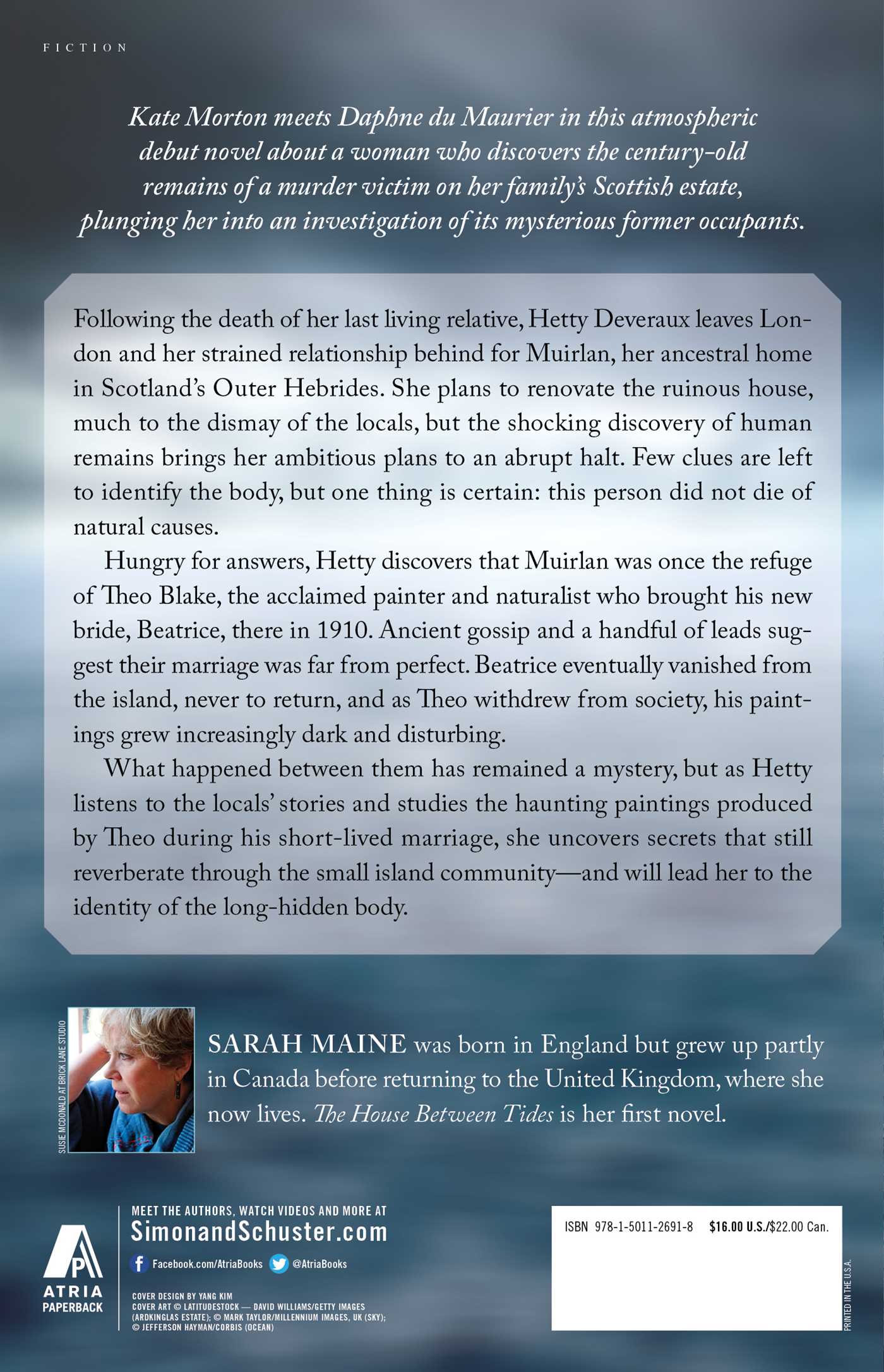 The House Between Tides

By Sarah Maine
LIST PRICE $17.00
PRICE MAY VARY BY RETAILER

An atmospheric debut novel about a woman who discovers the century-old remains of a murder victim on her family’s Scottish estate, plunging her into an investigation of its mysterious former occupants.

Following the death of her last living relative, Hetty Deveraux leaves London and her strained relationship behind for Muirlan, her ancestral home in Scotland’s Outer Hebrides. She intends to renovate the ruinous house into a hotel, but the shocking discovery of human remains brings her ambitious restoration plans to an abrupt halt before they even begin. Few physical clues are left to identify the body, but one thing is certain: this person did not die a natural death.

Hungry for answers, Hetty discovers that Muirlan was once the refuge of her distant relative Theo Blake, the acclaimed painter and naturalist who brought his new bride, Beatrice, there in 1910. Yet ancient gossip and a handful of leads reveal that their marriage was far from perfect; Beatrice eventually vanished from the island, never to return, and Theo withdrew from society, his paintings becoming increasingly dark and disturbing.

What happened between them has remained a mystery, but as Hetty listens to the locals and studies the masterful paintings produced by Theo during his short-lived marriage, she uncovers secrets that still reverberate through the small island community—and will lead her to the identity of the long-hidden body.

The House Between Tides Chapter 1 2010, James
The first bone he had dismissed as dead sheep. There’d been others—ribs decaying amidst rabbit droppings and debris from the collapsing ceilings, or bleached vertebrae. But the next one was a long bone, and he held it, considering a moment, then rocked back on his heels.

This was no sheep.

He leant forward, interest sharpening, and scraped at the sandy soil, revealing more stained bones and recognising a tangle of threads from decaying textile. A rotting plank half-covered the remains. He tried to move it aside, but it stuck fast, then he straightened, aghast, as certainty came. The plank was an old floor-board, nailed down, and the bones were underneath it.

He stared down at the remains, thrown off-balance, then bent again, his mouth dry, and explored further until he came to the pale orb of the skull. Then he stopped.

The body had been placed on its side with the head hard up against a boulder in the foundations, the chin dropped to the chest, exposing the side of the skull. Exposing not a smooth roundness but a fissured depression, choked with sand. His mind roared as he reached forward to clear crumbs of mortar from the half-buried jaw, flicking an indifferent wood louse from the bared teeth, his hand trembling as he uncovered more of the crushed temple and the dark orbit of an eye. Then he straightened again and stood looking down, the trowel hanging loose in his hand.

It was the snapping of fast wing beats that broke the spell, and he ducked instinctively as a rock dove bolted from its roost in an alcove—bloody bird!—and he glanced at his watch, twisting it on his wrist. Out of time. The tide had turned, and the wind was strong. Storm coming. He quickly bent to cover the bones again, then grabbed his jacket and ran to the Land Rover.

The empty stretch of sand which, for a few short hours twice a day joined Muirlan Island to the main island, was disappearing fast. Had he cut it too fine? He revved the engine hard as the vehicle descended the track and he reached the point where track met sand. Then the battered vehicle sped across, through the shallow water, spray arching from its wheels as it rounded the rocky outcrop at the midway point, following the vanishing tracks which had marked his route across that afternoon. Swooping terns accompanied the incoming tide as it flooded the sandy stretches between the headlands, closing in behind him. He glanced in his rear-view mirror at the grey bulk of the house silhouetted on the ridge, and gripped the steering wheel. A body, for Christ’s sake!

Then, as he tore across the wet sand, he glimpsed a figure in a long dark coat standing on a little headland, staring out towards the house. A woman? He looked more keenly. A stranger— The Land Rover plunged drunkenly into the last deep channel and he revved the engine again to pull up the other side, releasing his breath as he felt firm ground beneath the tyres. Then he swung the vehicle to the right, wiping damp palms on worn jeans, and headed down the single-track road, skirting the edge of the bay, to find Ruairidh. 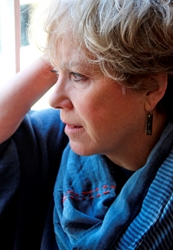 Sarah Maine was born in England but grew up partly in Canada before returning to the United Kingdom, where she now lives. She is the author of The House Between Tides, Beyond the Wild River, and Women of the Dunes.

Maine skillfully balances a Daphne du Maurier atmosphere with a Barbara Vine-like psychological mystery...The setting emerges as the strongest personality in this compelling story, evoking passion in the characters as fierce as the storms which always lurk on the horizon. A debut historical thriller which deftly blends classic suspense with modern themes."

“Maine contrasts Hetty’s present-day consternation with the past story of Blake and his wife, delivering details at a perfectly suspenseful pace… the historic mystery will keep readers guessing right up until the end.”

“The stark setting proves to be the perfect backdrop for Maine's well-plotted debut. The novel weaves secrets from both past and present with a bit of a romance and the feel of the Outer Hebrides to build a mystery that is as eerie and complex as the house of Muirlan itself.”

“Reminiscent of the Gothics of the 1970s, THE HOUSE BETWEEN TIDES by Sarah Maine takes the reader on a stimulating stroll through two time periods, igniting the senses with a classic mysterious aura. The moodiness of the location easily placed my mind on holiday in the past while unraveling the mystery in the present.”

"Evocative...Much is left up to the reader to interpret, which showcases the skill of this debut author. The novel is a haunting story of loss and longing in an unusual setting. Recommended."

“I really enjoyed the ambiance of the book… It felt like a great harmony between the environment and the mystery taking place. You could feel the mood of people in keeping with the landscape, the mood adapting to the elements... A very enjoyable atmospheric novel, spanning over a few generations, rich in landscape descriptions and suspense."

“The House Between Tides reminds me of books written by Phyllis Whitney, Victoria Holt or Mary Stewart in that they all have the same style of writing, moody, dark and atmospheric stories that involve romance and mystery where the male characters are often brooding and the women are bound to fall in love them in spite of their moodiness and mystery."

The House Between Tides

By Sarah Maine
LIST PRICE $17.00
PRICE MAY VARY BY RETAILER