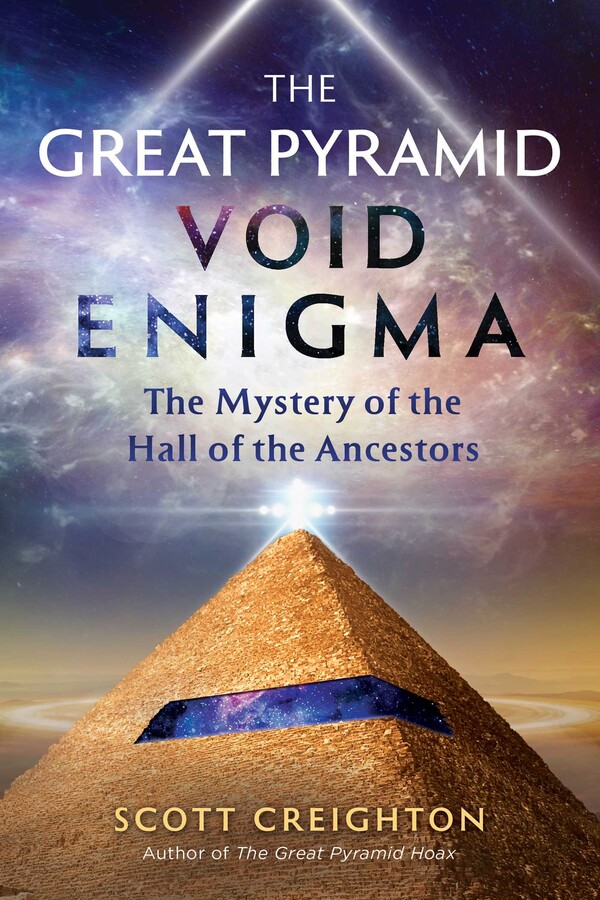 The Mystery of the Hall of the Ancestors

In November 2017, an international team of more than 30 scientists published the results of their two-year-long Great Pyramid research project in the journal Nature. Using an advanced imaging technique known as muon radiography, three groups working independently from each other discovered a massive, previously unknown space within the Great Pyramid of Giza. Mainstream Egyptologists suggest that the “Big Void” is simply a stress-relieving device for the Grand Gallery. But, as Scott Creighton reveals, ancient Coptic-Egyptian texts describe exactly what the Big Void is.

Exploring the controversy surrounding the Big Void, Creighton artfully debunks many of the theories about the purpose of this massive chamber as well as other long-held Egyptology beliefs. Analyzing the Coptic-Egyptian texts and evidence from astronomy, archaeology, and other sources, the author reveals how the Great Pyramid was built by Khufu as an indestructible recovery vault to help Egyptian civilization rebuild after a cataclysmic natural disaster--a rapid pole shift and subsequent deluge--predicted by his astronomer-priests. And the key component of the recovery vault would have been the Hall of the Ancestors, a sealed safe haven containing the mummified remains of the Osiris Kings, deceased pharaohs who would seek the benevolence of the gods to ensure Egypt’s recovery from the disaster.

From Chapter 6. Into the Void

This book began with the discovery of the “Big Void” and went on to show how there exists some good evidence to indicate that the Coptic-Egyptian oral tradition that speaks of the purpose of the Great Pyramid as some kind of “Ark” may actually be based more in fact than the myth believed by Egyptology. As explained in the opening chapter, the Big Void (figure 7.1) is believed to have similar proportions to the Grand Gallery (157 x 28 feet).

The discovery of this void has mainstream Egyptologists scratching their heads as to why such a massive “space” should exist within the Great Pyramid at all. While Egyptologists such as Mark Lehner and Zahi Hawass of the ScanPyramids project team advise caution in declaring this space a new chamber, it seems perfectly clear from the data that this massive void is not like many of the much smaller sand and mortar filled voids that the Great Pyramid is peppered with. Indeed, this void appears to be something altogether different and is highly likely, after further investigation, to be found to be the fifth major chamber within the Great Pyramid.

One of the reasons why Egyptologists are hesitant to pronounce this void as a new pyramid chamber is that there is no obvious entry to it. No passageways or connecting tunnels have been detected. If it is indeed a purposely built chamber, then it appears to be entirely isolated and apparently without any obvious means of access. Why would Khufu build his pyramid with a totally inaccessible chamber inside it?

Some have speculated that Khufu may have built this chamber to store his treasure, to perhaps take with him to the Afterlife. This scenario seems highly unlikely since, in accordance with ancient Egyptian burial rituals, it was the job of the ancient Egyptian priests to place these items within the Pyramid only after the king’s death, by which time this chamber would have been long completed and sealed. How, then, would it have been possible for the priests to place Khufu’s afterlife goods into a chamber to which there was no access; a chamber that was entirely sealed off as the Pyramid was built upwards and over it?

It seems that the mainstream narrative--that an ancient pyramid was simply a “tomb of the king”--needs a serious rethink, because the tomb paradigm, quite simply, cannot adequately explain this anomaly; especially if this void is found to be a purposely built, inaccessible chamber. While everyone is focused on the “void” and the modern science that went into discovering it, no one is looking at what the ancient Egyptians themselves have said with regards to the building of the pyramids, and if there is any clue in their ancient texts to shed light upon this discovery.

This book argues that the first, giant pyramids of ancient Egypt were conceived and constructed not as the “tomb of the king,” but rather as the “womb of the kingdom”; that the first sixteen or so pyramids of ancient Egypt, the giant pyramids, represented the allegorical “body of Osiris” (which was said to have been cut into sixteen pieces and scattered across the land of Egypt). This book further argues that the giant pyramids were conceived and built as “Recovery Vaults” for the kingdom in lieu of an impending deluge which the ancient Egyptians believed would overwhelm their kingdom.

This idea of a “Recovery Vault” is not unlike our modern-day seed vault on Svalbaard in the Arctic Circle, which opened in 2008. I did not, however, arrive at this Recovery Vault conclusion of my own accord--I took my cue from what the ancient Egyptian texts tell us:

“. . . The king then directed the astrologers to ascertain by taking the altitude whether the stars foretold any great catastrophe, and the result announced an approaching deluge. The king ordered them to inquire whether or not this calamity would befall Egypt; and they answered, yes, the flood will overwhelm the land, and destroy a large portion of it for some years. . . . upon which the king ordered the Pyramids to be built, and the predictions of the priests to be Inscribed upon columns, and upon the large stones belonging to them; and he placed within them his treasures, and all his valuable property, together with the bodies of his ancestors.”

And there it is--this text suggests that the Big Void within the Great Pyramid is a chamber built specifically to house and protect, “. . . the bodies of his [Sūrīd’s] ancestors.” What must be appreciated here is that, to the ancient Egyptians, their deceased kings and queens continued to perform a vital role for the living kingdom. In the afterlife their role was to commune with the gods in the heavenly realm to assist the living king to ensure the sun would rise, the Nile would flow, and that the crops would grow. Indeed, part of the reason why it was essential that the bodies of these kings and queens were preserved and mummified was to protect them against decay since a decayed body could not fulfill this vital function in the afterlife. It was also the job of the living king to protect the tombs of these long deceased kings and queens from robbery or desecration and to give prayers and offerings to help “nurture” them. Indeed, failing to do this could bring dire consequences for the living king and the kingdom.

And so, as a consequence of their religious beliefs, the ancient Egyptians had great reverence for their ancestor kings and queens and would go to quite extraordinary lengths to protect their long expired bodies, often removing their mummified remains from their original tombs to new, safer tomb locations when it seemed their original tombs were in danger of some kind (usually tomb raiders).
Scott Creighton

“Filled with intriguing new information that sheds light on the mysterious ‘void’ recently discovered within the Great Pyramid, this book makes significant contributions to our knowledge of this last surviving wonder of the ancient world.”

– Graham Hancock, author of America Before

“With some of the best forensic reporting, Scott Creighton looks again for answers to the most intriguing questions ever to emerge from the Great Pyramid. The mysterious and unexplained ‘Big Void,’ revealed in 2018 by subatomic-particle physicists, has baffled everyone so far, but now, with a wealth of facts and details unavailable from any other single source, Creighton makes stunning connections between cutting-edge science and esoteric tradition, and he backs it all up with some very impressive detective work. If you want to know the facts--and be thoroughly enthralled--you must not skip this terrific read.”

“Everyone loves a mystery, and the mystery of Giza’s Great Pyramid is perhaps the most enigmatic mystery known. Who built it? When, and why? These three questions have tantalized researchers and historical chronologers seemingly forever. Recently, the scientists of the ScanPyramids project discovered a large void as long and wide as the Grand Gallery itself; another large chamber hidden within an enormous, incredibly ancient structure. It’s a mystery, of course. In The Great Pyramid Void Enigma, Scott Creighton digs deep into the history and the most pertinent of legends surrounding Egypt’s pyramids and the Great Pyramid in search of answers to the big questions of ‘who, when, and why.’ Creighton sifts through the legends and explores the landscape of one of the most tumultuous times of our past, a time of climatic chaos and mass extinction 12,000 years ago. Most of all, he spins a marvelous story around a complex topic that the best of mystery writers will surely envy, and he links a 12,000-year-old catastrophe to the beginning of our own history. A fascinating and enlightening book. I couldn’t put it down.”

“In true whodunit style, Creighton transports the reader on a journey of exploration, skillfully weaving powerful themes with clear emotional expression, endeavoring to reveal the truth behind Egypt’s fabled Hall of the Ancestors. A comprehensive blend of history, archaeology, and ancient pyramid lore, it will undoubtedly rouse your curiosity.”

– Lorraine Evans, archaeologist, historian, and author of Burying the Dead

“Scott Creighton casts fresh eyes on one of the world’s oldest mysteries, shattering the expectations that there is nothing new to be revealed about the marvelous megaliths of Egypt’s Giza Plateau. Go inside the Great Pyramid void, and you’ll emerge looking back with reawakened wonder.”

– Rand Flem-Ath, researcher and coauthor of The Atlantis Blueprint and The Murder of Moses

The Mystery of the Hall of the Ancestors