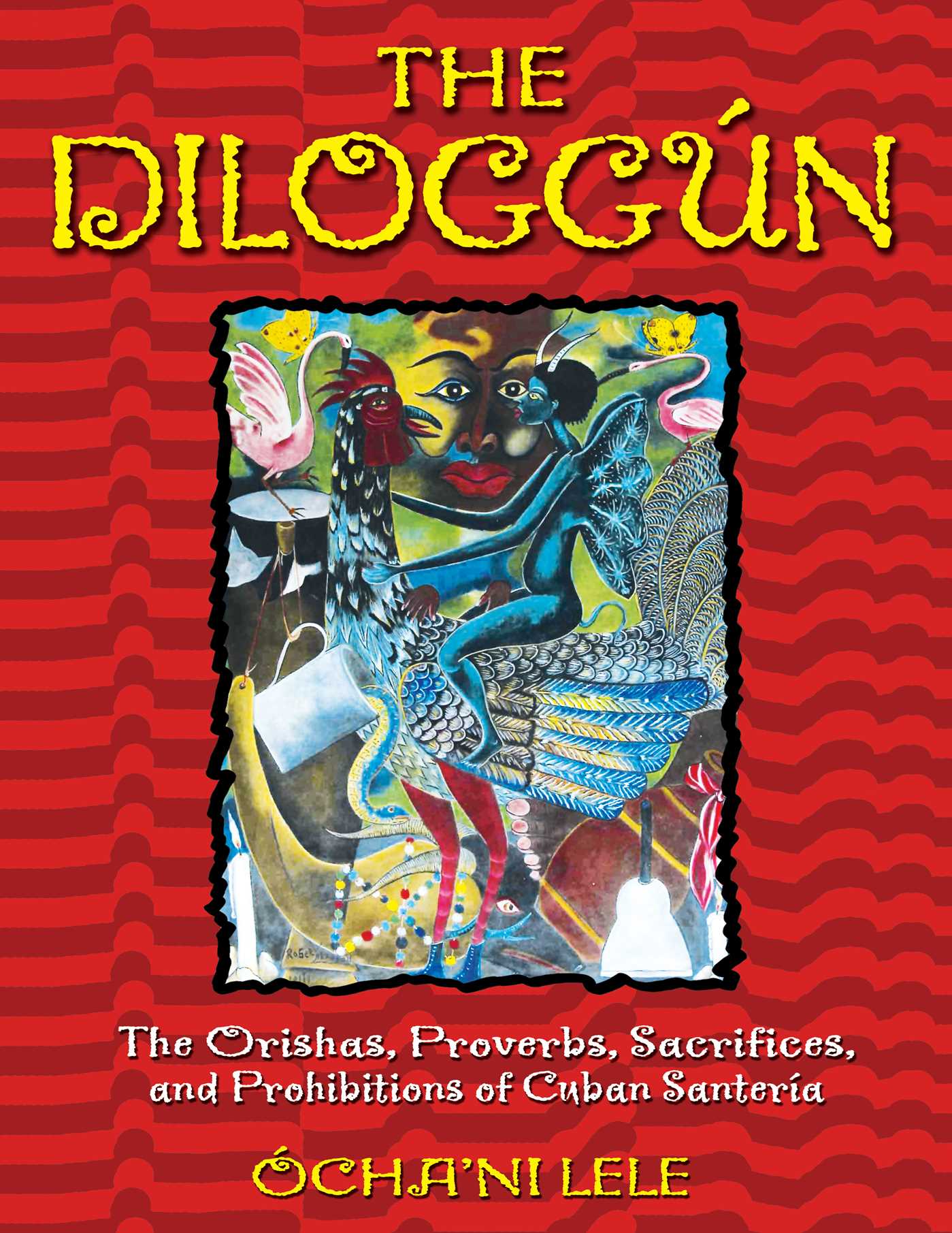 The Orishas, Proverbs, Sacrifices, and Prohibitions of Cuban Santería

The first book on Santería’s holiest divination system to thoroughly explore each family of odu and how their actions and reactions affect the spiritual development of the client.

• Includes the major considerations for sacrifice, providing the diviner with ways to placate and supplicate the Afro-Cuban deities known as orishas.

• Demonstrates how to properly end a reading so that negative vibrations are fully removed from the diviner's home.

• Provides a thoroughly detailed description of each of the 12 families of odu that exist in the diloggun--from Okana through Ejila Shebora.

The diloggun is more than a tool of divination. It is a powerful transformational process, and the forces that are set in motion when it is cast determine the future evolution of the adherent. The Diloggun is the first book to explore this Afro-Cuban oracle from the perspective of diaspora orisha worship. It is also the first book to explore the lore surrounding this mysterious oracle, which is the living Bible of one of the world's fastest growing faiths.

The twelve families of odu that are available to the diviner include 192 omo odu, the children of the odu, and each of these patterns or letters has its own proverbs, meanings, prohibitions, and sacrifices. Ócha'ni Lele provides the secret but essential information that the adept diviner needs to know to ensure that every element affecting a client's spiritual development is taken into consideration during a reading. His book is also the first to detail how to properly end a session so that negative vibrations are absorbed by the orishas and fully removed from the diviner's home. For those seeking the wisdom of ancient Africa, The Diloggun is an indispensable guide to the mysteries of the orishas.

One may describe the word itself, diloggún, in two fashions. First, when speaking of diloggún, one may be referring to the cowrie shells received by a Lucumí priest or priestess upon initiation. In the ritual known as asiento (or kariocha or just ocha), an adherent is crowned with his guardian orisha. Note that the concept of a guardian orisha is central to this faith. It is believed that each person who lives is ruled by one orisha, and when the ritual of asiento is given, that one spirit is put to the initiate’s head and is worn, briefly, as a crown. After this is done the initiate becomes a iyawó (bride) of that spirit and is properly initiated into the mysteries. For most, during the asiento one receives the following orishas: Obatalá, Yemayá, Oshún, Shangó, Elegguá, Ogún and Oyá. Each orisha is comprised of four material elements: otanes, implements, and diloggún. The otanes form the body of the deity; they are stones, and it is upon these that sacrificial offerings are given. The implements are the metal or wooden tools sacred to each spirit, symbols by which they do their work on earth. Diloggún is the most important aspect of an orisha, for within these cowrie shells are the soul of each deity. All except for one spirit, Elegguá, will have eighteen shells in his or her diloggún. Elegguá has twenty-one shells in his, for twenty-one is his sacred number and is shared with no other spirit.
Diloggún is defined within the context of divination as well. For just as the shells are believed to house the soul of an orisha, they are also believed to be their mouthpieces. In its natural state, a cowrie shell has a smooth, rounded back on one side, and on the other, an elongated, serrated opening resembling a mouth. Before initiation, the initiate’s godparents painstakingly sort through bags of these shells, picking the largest, strongest, and most beautiful to house the orisha’s soul. With a knife or file, the rounded side of the cowrie is worn away so that both side are flat. When the orisha’s stones and implements are consecrated, these shells are consecrated as well, born from the godparent’s own orishas with the aid of an herbal elixir known as omiero. Once born, it is believed that the orishas can speak through these shells, for they are their mouthpieces. When reading or casting the oracle known as diloggún, the diviner uses sixteen shells from an orisha’s set of cowries. He picks these from the lot at random, and sets the remaining shells to the side, facedown. Cowries left to the side are known as adele (witnesses), and while they must be present for divination, they remain unused. The mechanically opened side of the shell has a value of zero while the natural mouth has a value of one. This means that when the sixteen cowrie shells are cast on the diviner’s mat, a numerical value from zero to sixteen is obtained; it is through these numbers that the orisha invoked speaks to the priest. For the purposes of this book, when one speaks of casting or reading the diloggún, it is assumed that one is speaking of the sixteen shells used in divination.
To comprehend the diloggún’s system, think of it as a vast, limitless book chronicling creation, beginning with the first stirring of Olódumare. If the diloggún is the complete book, each odu is a single chapter of that book. There are sixteen major divisions of the diloggún known as the parent odu, and it is not incorrect to think of each parent odu as a single chapter to itself. From them are all things in this system derived. Each parent odu has a name and a number associated with it. To effectively employ this oracle, one must know all sixteen names and their numerical equivalents. These are: Okana (one mouth), Eji Oko (two mouths), Ogundá (three mouths), Irosun (four mouths), Oché (five mouths), Obara (six mouths), Odí (seven mouths), Eji Ogbe (eight mouths), Osá (nine mouths), Ofún (ten mouths), Owani (eleven mouths), Ejila Shebora (twelve mouths), Metanla (thirteen mouths), Merinla (fourteen mouths), Marunla (fifteen mouths), and Merindilogún (sixteen mouths). The number of mouths displayed in a single casting of shells corresponds to the number of an odu (hence, if five open mouths fall on the diviner’s mat, the odu Oché is open).
Just as many books have smaller sections within each chapter, so does each odu have smaller divisions. These are called the omo odu (children of odu). Each is a part of a spiritual family linked by the parent odu that gave it birth, just as each subheading of a chapter is part of the chapter’s greater whole. When casting the diloggún, an italero accesses one of these patterns. He does this by gently awakening the spirit of an orisha with an invocation known as mojubando, a litany paying homage to God, the earth, the ancestors, and the orisha whose diloggún is cast. The diviner himself does not know, initially, which section of the book to read; however, by awakening the orisha with the litany of mojubando, that spirit identifies what part of the diloggún applies to the client. To do this requires two castings. The first names the parent odu, and the second letter modifies the first, narrowing the reading down to 1 of 256 possible combinations. For example, if the diviner’s first casting of diloggún results in a mandala of nine open mouths on the mat, the parent odu is Osá. Casting the cowries a second time, if the diviner counts three mouths, the odu Ogundá has fallen. The first casting of Osá is modified by the second. The resulting odu is named Osá Ogundá, and the diviner knows he must search his memory for the meanings of that sign.
Ócha'ni Lele

Author of The Secrets of Afro-Cuban Divination, Ócha'ni Lele (1966-2019) was immersed in the underground culture of Orisha worship in 1989. By 1995 he had received several initiations in both Santeria and the Congo faith Palo Mayombe and in 2000 he made Ocha and was crowned a Santeria priest.

"Stuart Meyers is to be congratulated and commended for producing this strikingly beautiful volume."

"Every nook, cranny and crack of Santeria is covered, explained, demonstrated and laid out in clear, simple terms."

"The Diloggun is an indispensable guide to the mysteries of the orshas."

“In this new book Ócha’ni Lele has brought together information never before published for the education of serious students of divination, and for use by initiated practitioners of African traditional religions, especially those who follow La Regla de Ocha. In doing so, he has more than justified his own claim that ‘one cannot overstate the academic and scholastic value’ of this work.”

"The sheer amount of information contained within the covers of this book is astounding. I have never seen a book which explains this type of divination in anything like this amount of detail."

"The first important work to document the art of Diloggun reading thoroughly in English."

“The effort that went into writing this book is only exceeded by the expertise required to write it. Ócha'ni Lele has produced a highly significant addition to the body of lore on Lucumé/Santería that is valuable for its comprehensive insights and its value to prosperity in the religious tradition. Kudos to the editors and publisher of this book for accepting such a massive undertaking. Well done!”

The Orishas, Proverbs, Sacrifices, and Prohibitions of Cuban Santería