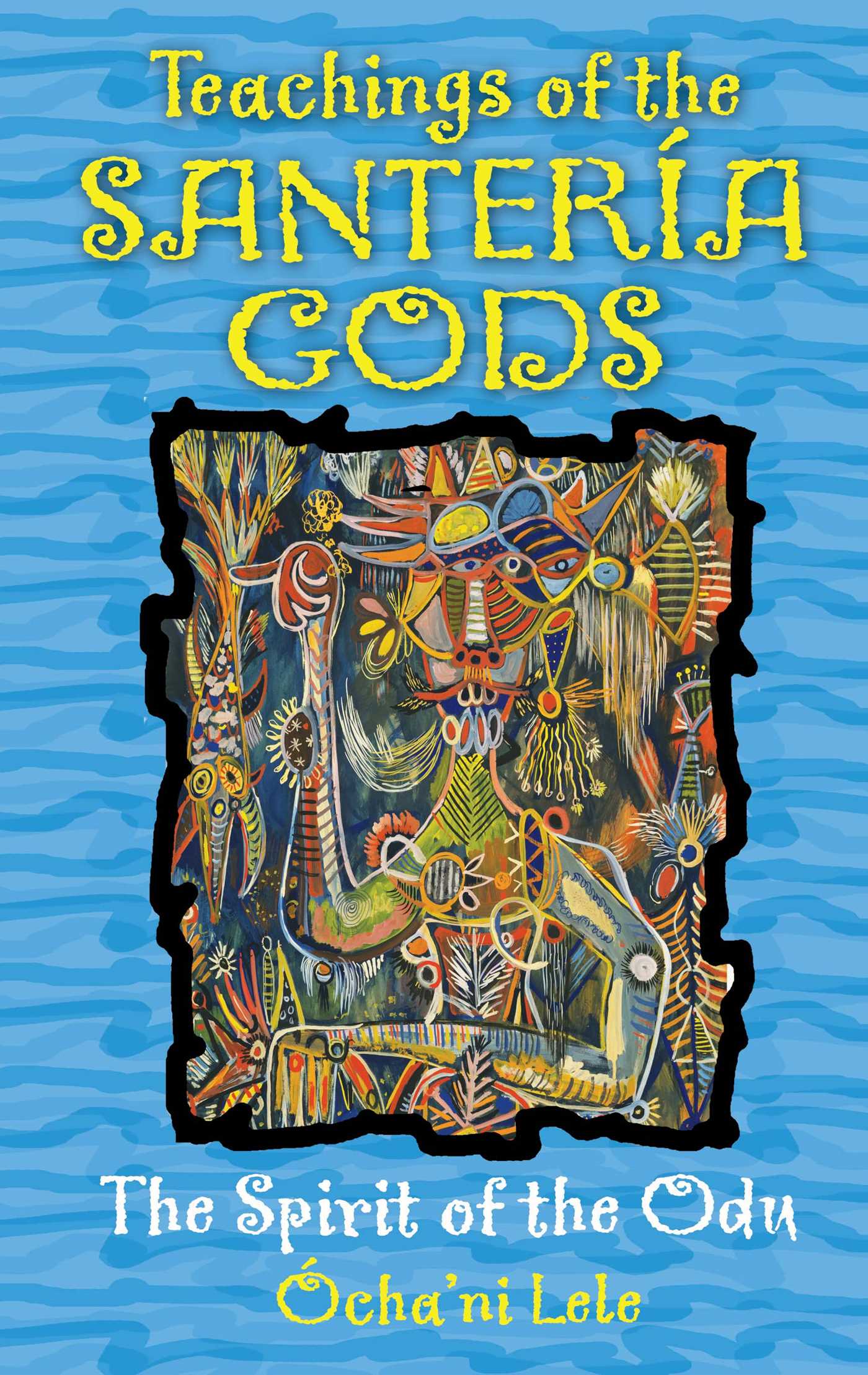 The first book to explore the sacred myths of Santería

• Includes more than 100 myths, stories, and histories about the odu and the orishas

• Reassembles the oral fragments from the African diaspora into coherent stories

• Demonstrates that the African peoples, specifically the Yoruba, were deeply spiritual

At the core of the diloggún--the sacred divination system of Santería--are the sacred stories known as the patakís, narratives whose themes are as powerful and relevant today as they were in the minds of the ancient Yoruba who safeguarded them. Each patakí is connected to one or more of the 16 odu, the principal creative forces of Santería. Some recount the lives of orishas on earth, others the lives of individuals in heaven, and some tell of the odu themselves, for even they once walked the earth as mortals.

The first book to explore these ancient African stories in English, Teachings of the Santería Gods recounts more than 100 of these sacred parables, including many stories reassembled from the oral tradition of the African diaspora. Ranging from creation myths to what happens when a love potion works far too well, these stories share the wisdom and spirituality of the Yoruba people of ancient Africa and form the living, oral bible of one of the world’s fastest-growing faiths.

EIGHT MOUTHS ON THE MAT

The diloggún is one of the most complex yet most beautiful systems of divination practiced not only by adherents of the Lucumí faith but also by the Yoruba people in Nigeria. It is a living, oral body of wisdom that took on flesh when the sixteen principle odu (patterns of cowrie shells that can fall in the diloggún) became mortal, living beings, each in one of the sixteen ancient kingdoms of the Yoruba Empire.

When a diviner casts the sixteen shells on the mat, he obtains a numerical value from zero to sixteen. The number corresponds to a particular odu in the divination system, and the associated orisha (spirit) uses this odu to speak to the priest. Each of the odu forms a spiritual organism that forebodes various blessings (known collectively as iré) or misfortunes (known collectively as osogbo). Depending on the question asked, the diviner and client determine the ebós (offerings to the orishas) necessary to restore harmony.

It was early morning and Olódumare [God] was alone, standing motionless on a balcony overlooking both Heaven and Earth. His eyes were closed to what lay before him: his mind was focused on things in other worlds. So deep was his concentration, so motionless was his body, that he seemed a black marble statue, permanently poised over creation. A light breeze lifted the diaphanous robes swathing his body; they filled the room behind him with their fullness as they twisted and turned in the night air.

God took a deep breath and opened his eyes as if he had only blinked. He lifted his arms to the sky and felt warmth as the sun rose above the eastern horizon. The sun, the body of Olorún, trailed above as it had for thousands of years, slowly dispensing ashé [energy, power] throughout creation.

“As above, so below,” he whispered, knowing that as Olorún spread ashé through Heaven, he was also spreading it on Earth.

Then came the predictable morning knock at his chamber’s door: every morning, there was a knock at his door, some new soul who yearned to travel to Earth, experiencing life.

In a single motion as fluid and effortless as breathing, Olódumare withdrew from his balcony, and seated himself on his throne. His light, gauzy robes were still drifting and trailing through the air as he extended a hand toward the door and bid it open.

It was Unle, and the odu stiffened with awe as he stood in the doorway and saw God for the first time. Sitting in state, Olódumare’s statuesque quality returned, and had it not been for the supple sheen of his face, or the soft glow of omnipotence in his eyes, Unle would have thought him a statue. But most impressive to Unle were Olódumare’s white robes. It seemed God wrapped himself in all that was pure and clean, a tapestry of white light, not cloth.

For what seemed an eternity, Unle stood and gazed at his creator. Ashé filled the room; it suffused everything in it, and swallowed Unle like a hungry beast. It was love; it was life; it was power, and it was thick. He could barely move.

Olódumare smiled, and that simple acknowledgment brought tears to Unle’s eyes. Finally, he knew God was seeing him face-to-face. Having no words to express the feelings welling up in his heart, Unle approached the throne and put himself on the floor in reverence.

He felt strong hands on his shoulders that sent currents of ashé through his body as the rich, elderly voice intoned, “May you be blessed. Arise!” Strong arms lifted him, embraced him, and for a moment Unle forgot he was Unle, and he was one with Olódumare.

Gently, Olódumare broke the embrace, and Unle shivered; it was loss, it was sadness; it was separation, and for a moment he couldn’t bear it until God spoke, “Why have you come, Unle?” It was an invitation to speak, not a question. God knew everything.

“I have come to request my destiny on Earth.” Unle’s voice wavered, and it ended in a whisper. A destiny on Earth meant a separation from Heaven. Here, in God’s presence, he couldn’t bear that thought.

Olódumare touched his chin firmly and lifted his head so their eyes met. “What would you like to do on Earth, my son?”

A thousand and one desires rose in Unle’s thoughts, but Olódumare’s voice plunged deep inside, pulling Unle’s true destiny to the surface. And before he could answer willingly, Unle found himself saying, “I want to help others.”

“How would you help others, Unle?”

“Wisdom and knowledge are your grace. But what you accomplish with your long life and wisdom is in your hands. As a diviner, you will know how to avoid all manner of misfortune and bring all types of blessings to yourself. Use those gifts wisely.”

Olódumare stretched out his hands, taking Unle’s head into them. Unle felt a powerful ashé flowing; it was warm, like fire, yet liquid, like water, and he shuddered as God cried,

“Give my tongue the ashé with which to speak. Ashé is sufficient; ashé envelops all; ashé is born. Ashé, work for me!”

His voice caused the very fabric of Heaven to rumble and shudder, and in his hands appeared a wizened, humbled head. It was Unle’s new head, the one that would accompany him to Earth. Olódumare whispered,

Unle was in Heaven no more.
Ócha'ni Lele

Author of The Secrets of Afro-Cuban Divination, Ócha'ni Lele (1966-2019) was immersed in the underground culture of Orisha worship in 1989. By 1995 he had received several initiations in both Santeria and the Congo faith Palo Mayombe and in 2000 he made Ocha and was crowned a Santeria priest.

“There is no more magical way to feel close to the orishas than through the patakís. It is there that one is transported to one’s imagination. Ócha’ni Lele has a very spiritual manner in elevating my imagination through his writing, which reveals a special touch. ¡Maferefun orichas! What is seen is not questioned! This is a special book for those of us who go forth from the heart, without malice. Ócha’ni Lele, my dear, I congratulate you!”

“This book is a page turner. Ócha’ni Lele relates these sacred stories with the ease of a knowledgeable narrator while drawing clarity and meaning out of the religion’s complex chorus of voices. This book moves the deep spirituality of the religion away from ethnography and connects the sacred to religious studies where it is well overdue.”

"If you have any interest in Santeria, or in a story well-told, then you should pick up Ocha'ni Lele's Teachings fo the Santeria Gods. Don't simply read it, savor it. Each of these stories is a gem worth examining, and Lele is the wise jeweler joyfully pointing out each facet."

"For the first time, one hundred of the ancient African stories known as pataki have been made available in English. It was a gargantuan labor of love for the author."

"Loaded with stories that provide entertainment and unique perspectives, Teachings of the Santeria Gods is an excellent book for those looking to learn about Santeria or African folklore."

“Two words sum up Teachings of the Santeria Gods: Spirit of the Odu . . . ‘Beautifully Written’.”

“. . . well-written, informative, possessed of rare clarity, and a joy to read.”