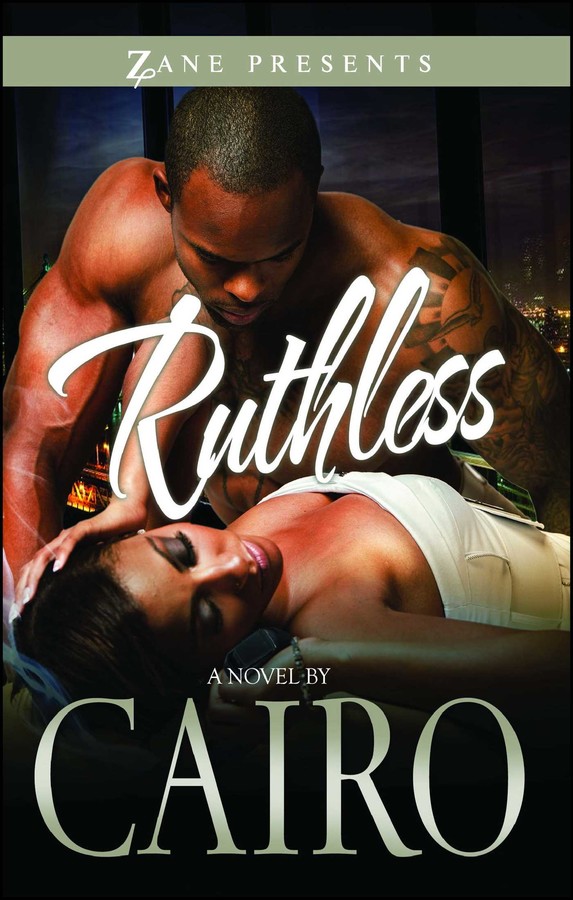 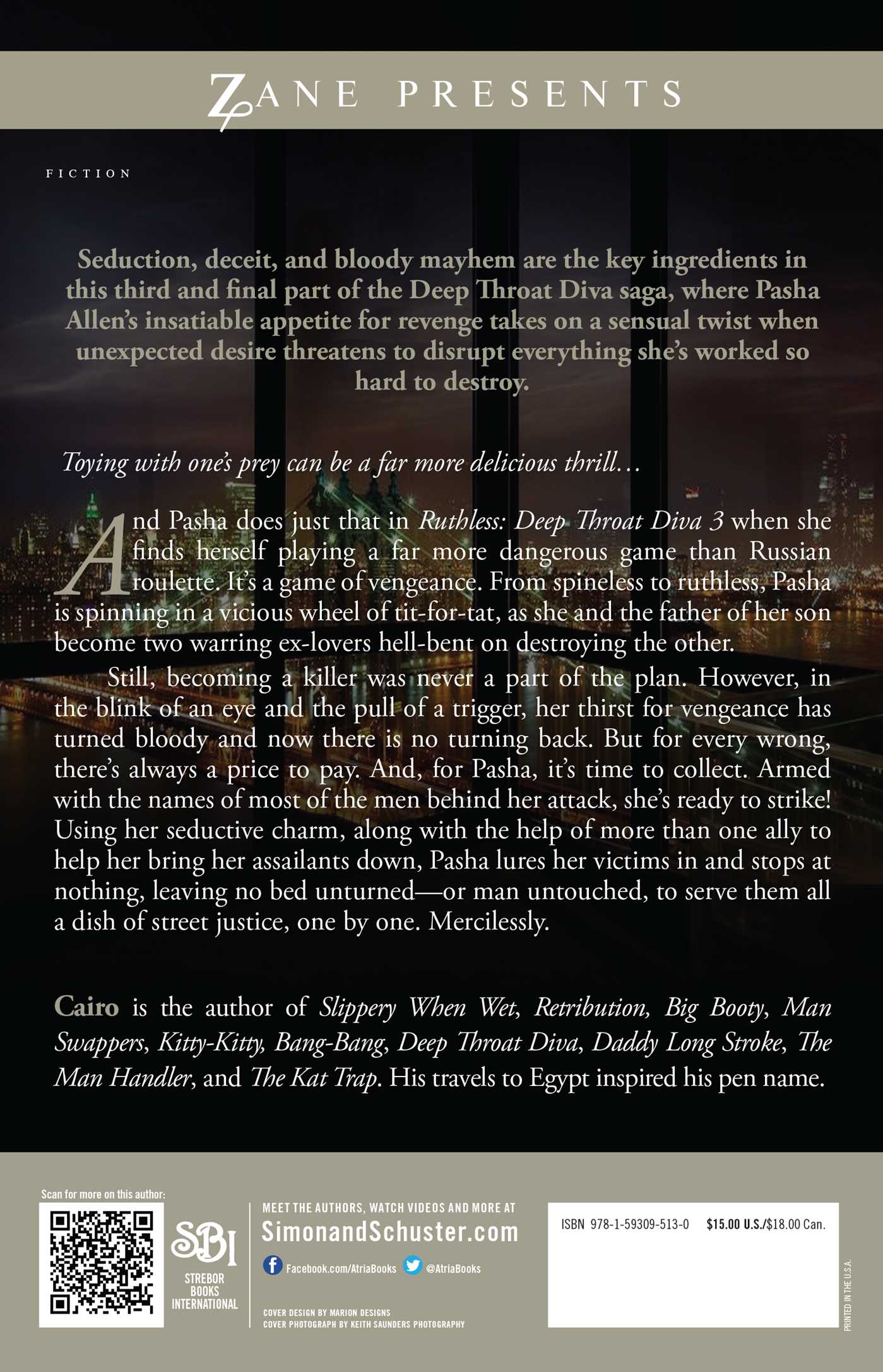 By Cairo
LIST PRICE $16.99
PRICE MAY VARY BY RETAILER

Seduction, deceit, and bloody mayhem are the key ingredients in this third and final part of the Deep Throat Diva series, where Pasha Allen’s insatiable appetite for revenge takes on a sensual twist when unexpected desire threatens to disrupt everything she’s worked so hard to destroy.

Toying with one’s prey can be a far more delicious thrill, and Pasha does just that when she finds herself playing a far more dangerous game than Russian roulette. It’s a game of vengeance. From spineless to ruthless, Pasha is spinning in a vicious wheel of tit-for-tat, as she and the father of her son become two warring ex-lovers hell-bent on destroying the other.

Still, becoming a killer was never a part of the plan. However, in the blink of an eye and the pull of a trigger, her thirst for vengeance has turned bloody and now there is no turning back. But for every wrong, there’s always a price to pay—and for Pasha, it’s time to collect. Armed with the names of most of the men behind her attack, she’s ready to strike. Using her seductive charm, along with the help of more than one ally to help her bring her assailants down, Pasha lures her victims in and stops at nothing, leaving no bed unturned—or man untouched—to serve them all a dish of street justice, one by one. Mercilessly.

Wednesday morning, as I’m walking into the salon quarter-to-eight with Lamar and Mel behind me, my cell rings. I reach down into the side pocket of my purse, pulling it out, glancing at the caller ID. It’s Thick Seven.

In spite of what’s going on inside my head, I smile. Hearing his smooth, dreamy voice on the other end of the line is a welcomed distraction. And if I’m completely honest with myself, I really like him. But I know he’s a diversion I don’t need right now. I can’t risk it. After the things I’ve done over the last weekend—and the things that I’m about to do, I need to stay on course. Can’t lose perspective. So this thing between us is going to have to end, sooner than later. Besides, he’s someone else’s nigga who I’ve been regularly borrowing for the last several months.

“Hey,” I say, answering before his call gets sent to voicemail. I leave Lamar and Mel up front, heading toward my office. I unlock the door, immediately greeted by the smell of fresh paint and new carpet. The walls are now a soft pink. The carpet is a rich chocolate brown. Everything is put back in its place. Any signs of my bloody deed from Sunday night have been scrubbed down, painted over, pulled up, and discarded.

“What’s good, beautiful? How you?”

I yawn in his ear. “Ooh, excuse me,” I quickly say, apologizing.

“Oh, you good, baby. Sounds like someone had a late night.”

Fact is, instead of flying back from L.A. Monday night like I had intended to, I stayed an extra day to spend it with my Jaylen, giving Sophia and Greta a break. So I took the red-eye last night instead. And landed a little after seven this morning. Then, instead of going home, I had Mel pick me up from the airport to get my car from Lamar’s boy’s body shop, then drove straight here with him following behind me.

So here I am…at the salon, pretending.

That I hadn’t initiated burning down three of Jasper’s stash houses; that I’m not planning to burn down three more—this week.

That I hadn’t sucked Stax’s dick and swallowed his creamy nut Saturday night; that I hadn’t allowed him to rock my pussy with his tongue and fingers, then his hard dick right here in my office, enjoying every last thick inch of him.

That I hadn’t turned on my laptop, logged into my Deep Throat Diva AOL account and reached out to the nigga who attacked me in my yard, then harassed me for not sucking his dick, making plans to slice off his fucking balls.

That I hadn’t murdered Felecia, taking a serrated knife and hacking out her tongue after shoving a gun in her mouth and blowing a hole in the back of her skull.

The first person on my list to take down.

Yes, I am pretending. The curtain is up. The stage has been set. The script is written. The spotlights are on. The scenes are playing out quite nicely. And there’s nothing anyone can do or say to stop what’s about to happen next. So onlookers might as well sit back, relax, nibble on their proverbial popcorn, and wait for the drama to unfold. Because shit’s about to get real.

Images of Stax’s hard dick pop into my head. I grin, licking my lips and pressing my thighs together. Whether he likes it or not, shit between him and Jasper is about to change quickly. No matter how hard Stax tries, it’ll never be the same between them. How could it be after I put it on him? To think, the divide that is about to come between them is by my own doing. And all it took was a few shed tears and a good dick suck to break his resolve.

Yes. Coercive manipulation. All a part of the plan. To milk him, suck him, edge Stax, into giving me what I need. I haven’t heard from him since I sucked the nut out of him, and coated his tongue with my pussy cream. And right now, it’s probably for the best.

I open my bottom drawer, grab my handbag and pull out the slip of paper with the list of names Cassandra wrote out, then reach for a pen and write the nigga AJ’s address she’d given me next to his name. Then I add two more names to the list, underscoring each one.

The two names Stax had given me. I stare at the paper. He refused to tell me any more than this. Refused to rat out the rest of the niggas Jasper recruited in his sick, twisted attack on me. But I’m fine with it. He’s told me enough, for now.

Until I suck him down into my throat, again. And there will be a next time. No matter how hard he tries to fight it, Stax will come back for more.

I glance at the paper again. These two niggas are the ones who kidnapped me. Now, altogether, I have six names, not including Jasper’s. And one of the niggas is already handled thanks to Booty killing him. I draw a line through JT’s and Felecia’s names.

And this bitch, along with JT, is also considered missing, thanks to me! No. Thanks to her fucking mouth!

Even if I can’t track down every last one of the motherfuckers who played a part in my assault, I’m okay with getting at the ones I do know. One by one, they’re going to get dropped. Until the only one left standing is Jasper. Saving the best for last.

“I wanna see you, yo,” Thick Seven says, slicing into my thoughts. “But I know shit’s hectic right now so I’ma be easy and let you do you.”

“I appreciate that,” I say, running a hand through my hair. He wants to know when I’m going back to L.A. I don’t tell him I just returned this morning. Or that I’m going back Sunday morning. It’s none of his business. Being away from my son is killing me. Has me feeling empty and alone. I know it’s only been six days since I moved Jaylen and Sophia out to L.A. and asked Greta to be his temporary caretaker until this mess with Jasper is over. Until I am free of him, once and for all. Still living without my son, no matter how short term it is, is one of the hardest things I am dealing with. The aching in my heart is like no other. But I know it’s for the best.

And sucking this nigga’s dick isn’t going to fill that void. Nor is giving him some pussy. And it isn’t going help me do what needs to be done.

He lets out a slight chuckle. “I can’t get enough of you, baby. Seems like goin’ to Cali is the only way I’m gonna be able to get at you and that magical tongue of yours again.” He lowers his smooth voice. “I wanna feel them pretty-ass lips up on this dick, soon, baby. Damn. Every time I talk to you, my shit gets hard.”

I smirk, looking up when someone knocks on my door. I cover the mouthpiece and tell whoever’s on the other side of the door to come in. “Well, I’m glad to know I have that kind of effect on you,” I say, avoiding his initial question.

“You definitely do. But look, baby, I gotta bounce. Just wanted to hear that sexy-ass voice of yours. And let you know this dick’s hard for you. Stay sweet, babe.”

“I always do,” I say, ignoring the remark about his hard dick. I end the call as Lamar walks in, a black backpack slung over his left shoulder, shutting the door behind him.
Cairo

Cairo is the author of more than twenty books, including The Pleasure Zone, Slippery When Wet, The Stud Palace, Kitty-Kitty, Bang-Bang, Daddy Long Stroke, The Man Handler, The Kat Trap, and the Deep Throat Diva series. His travels to Egypt inspired his pen name.

By Cairo
LIST PRICE $16.99
PRICE MAY VARY BY RETAILER