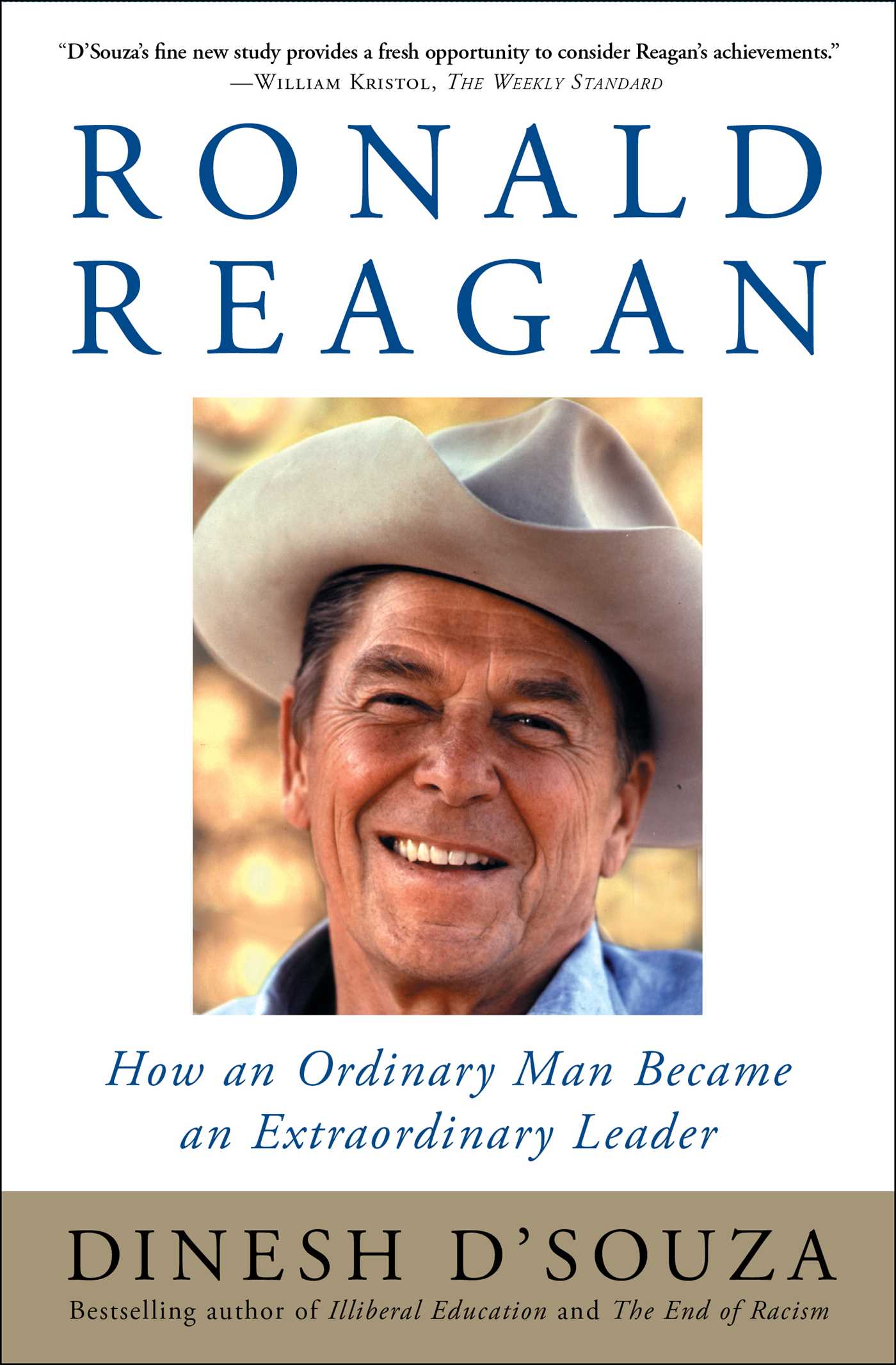 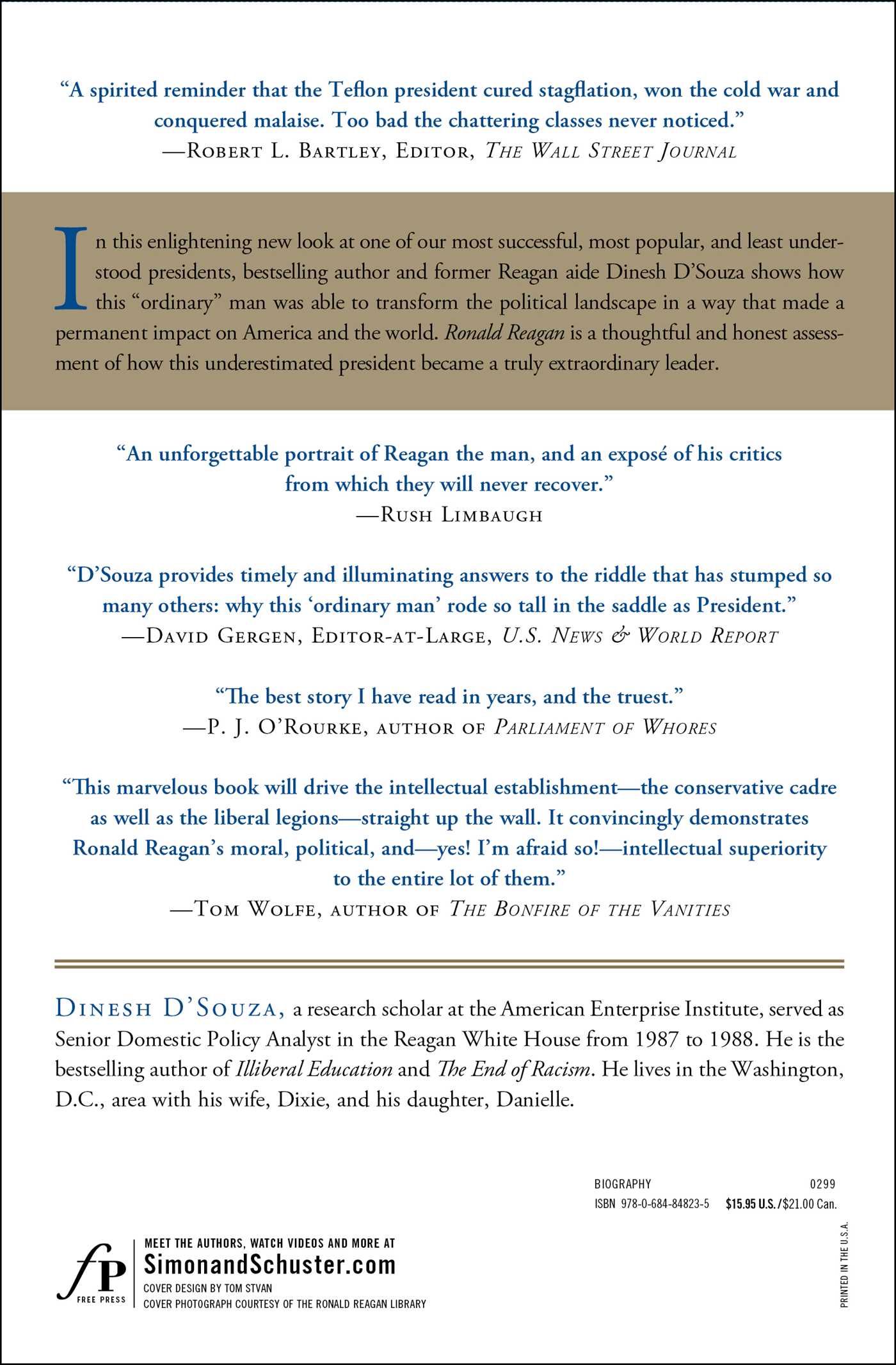 How an Ordinary Man Became an Extraordinary Leader

By Dinesh D'Souza
LIST PRICE $17.00
PRICE MAY VARY BY RETAILER

In this enlightening new look at one of our most successful, most popular, and least understood presidents, bestselling author and former Reagan aide Dinesh D'Souza shows how this "ordinary" man was able to transform the political landscape in a way that made a permanent impact on America and the world. Ronald Reagan is a thoughtful and honest assessment of how this underestimated president became a truly extraordinary leader.

Perhaps it is not surprising that the pundits and intellectuals were so critical of Reagan. They accused him of being outside the mainstream of enlightened thinking about issues -- and they were right. Reagan represented a challenge to their entire worldview. Moreover, accustomed as they were to calling the shots, they had come to see their perspective not as one view among many but as an objective account of reality itself. Thus they considered Reagan's challenge to their orthodoxy to be not only wrong but rude. Right when they were busy sorting out the world's problems, along came this corny Californian with no credentials or experience, armed with nothing but his own wacky ideas. He was able to oppose them successfully because he enjoyed a rapport with the American public that the elites never really understood.
Since many of these pundits disapproved of Reagan's views from the outset, regarding his policies as wrongheaded and destructive, we cannot expect them to applaud his success in enacting his agenda. It is human nature to judge the effectiveness of a leader based on whether we approve of what he put into effect. Incredible resources have been invested by Reagan's opponents since the 1980s to discredit his record, which in a way is a tribute to his legacy.
What is surprising is that since he left office, Reagan has not had more defenders from among his aides and from political conservatives in general. One might expect these former lieutenants and their ideological allies to mount a ferocious counteroffensive for the Gipper. No such luck. While his enemies have been excoriating him, his aides and allies have responded for the most part with a deafening silence. Their failure to defend Reagan naturally reinforces the liberal critique. Why the reticence? It turns out that many intellectuals and pundits on the right were, even during Reagan's tenure, ambivalent about the man and no less mystified than the liberal elite as to the source of his appeal. Even now, they cannot bring themselves to credit the remarkable events of the 1980s to a man of Reagan's unusual background, unscholarly intellect, and whimsical style. In truth, they do not rush to defend Reagan because they are a little embarrassed by him.
A reluctance to defend Reagan is one thing; outright hostility is another. No other president seems to have inspired less loyalty among his aides. There are a few exceptions -- Attorney General Edwin Meese and domestic adviser Martin Anderson come to mind -- but by and large, the memoirs penned by senior officials who served in his administration have been antagonistic and demeaning to Reagan. Even the legendary loyalist, George Bush, broke ranks with Reagan in his last year of office. How can Bush's 1988 promise of a "kinder, gentler America" be interpreted other than as an implicit criticism of Reagan? Bush was too much of a gentleman to put down Reagan himself, but officials in the Bush administration made no effort to defend the Reagan record, and sometimes they expressed undisguised scorn for the man. They seemed resolved to get beyond what they regarded as Reagan's amateur, simplistic approach and finally do things like true experienced professionals.
Reagan's other aides were no different. To judge them by their comments when he left the White House, Reagan was surrounded by ingrates and apostates. The memoirs of several Reagan aides are characterized by an almost defiant disloyalty. David Stockman, Reagan's budget director, presents his former boss as a tragically confused figure who "accepted but never grasped" the political consequences of his policies and who allowed himself to become the puppet of supply-side fanatics and hard-liners in the Defense Department. In his 1987 memoir, Michael Deaver, a senior White House aide, portrayed the president as a kind of detached figurehead, whose statements and actions had to be carefully managed so he didn't embarrass himself. Deaver also disclosed that Nancy Reagan played an active role in many aspects of personnel and policy, lobbying her husband on issues from the homeless to Star Wars. This portrait was reinforced by Donald Regan, Reagan's chief of staff, who confirmed the first lady's machinations and revealed that some of her actions on the president's behalf were based on her consultations with an astrologer. Regan depicted the administration as utterly lacking direction from the top and perennially prone to blunders. Indeed in 1986 he told the New York Times that "some of us are like a shovel brigade" following the circus elephant, cleaning up his droppings along the parade.

Dinesh D’Souza has had a twenty-five-year career as a writer, scholar, and public intellectual. A former policy analyst in the Reagan White House, D’Souza also served as John M. Olin Fellow at the American Enterprise Institute, and the Robert and Karen Rishwain Fellow at the Hoover Institution at Stanford University. He has been named one of America’s most influential conservative thinkers by the New York Times Magazine, and Newsweek cited him as one of the country’s most prominent Asian-Americans.

Rush Limbaugh An unforgettable portrait of Reagan the man, and an exposé of his critics from which they will never recover.

David Gergen Editor-at-Large, U.S. News & World Report D'Souza provides timely and illuminating answers to the riddle that has stumped so many others: why this ordinary man rode so tall in the saddle as President.

P.J. O'Rourke author of Parliament of Whores The best story I have read in years, and the truest.

Tom Wolfe author of The Bonfire of the Vanities This marvelous book will drive the intellectual establishment -- the conservative cadre as well as the liberal legions -- straight up the wall. It convincingly demonstrates Ronald Reagan's moral, political, and -- yes! I'm afraid so! -- intellectual superiority to the entire lot of them.

How an Ordinary Man Became an Extraordinary Leader

By Dinesh D'Souza
LIST PRICE $17.00
PRICE MAY VARY BY RETAILER