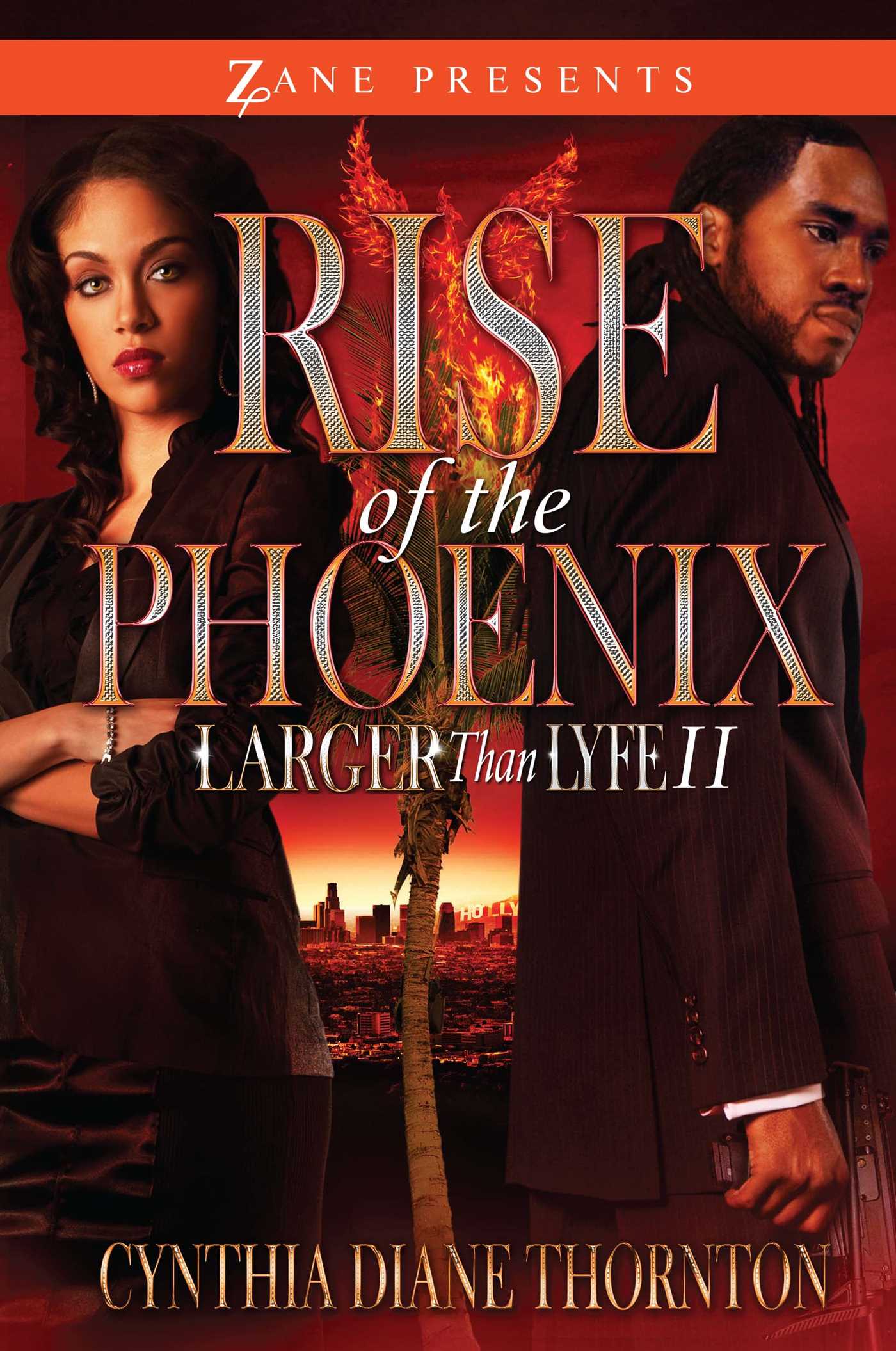 The follow-up to Larger Than Lyfe—Keshari Mitchell is back in Los Angeles after faking her death to escape from a life of crime.

After a massive, identity-altering, physical transformation in Brazil, Keshari Mitchell is back as “Darian Boudreaux” and aims to take the film industry by storm as the founder and executive producer of a start-up film company, Phoenix Films, which has recently acquired a highly controversial movie script from an anonymous source. Phoenix Films is about to make a major name for itself with a big budget biopic about the mysterious record mogul Keshari Mitchell’s life, including details regarding her long-rumored affiliation to major organized crime.

Will returning to the United States after faking her death turn out to be the greatest mistake of Darian Boudreaux’s life? And will The Consortium, the highly sophisticated crime ring to which Keshari Mitchell once belonged, come to find out the truth?

Rise of the Phoenix -1-
“Darian, baby, come on…wake up,” Mars coaxed, gently stroking Darian’s hair as he sat beside her hospital bed.

Claudio Henriqué, Darian’s plastic surgeon, assured Mars that she would be fine. He and his staff had kept her under close observation since completion of the surgery. She would be extremely groggy from the anesthesia, but she was expected to make a full and relatively speedy recovery.

Keshari Mitchell, now “Darian Boudreaux,” had been through a total of twelve very high-risk plastic surgeries in a massive physical transformation required for her to fully assume her new identity. A team of surgeons, over the span of a year and half, employed some of the most controversial, state-of-the-art medical techniques on the planet to deliver a clean slate to the former, internationally known record label mogul. She was now…physically…a completely different person. She’d undergone four levels of skin bleaching, taking her complexion from a deep cinnamon brown to a light honey color. A team of oral surgeons dramatically altered her dental profile by breaking and resetting her upper and lower jaws and implementing dental implants so that neither dental x-rays nor impressions would ever reveal the woman she used to be. Surgical contouring made slight but noticeable changes to Keshari’s almond-shaped eyes and the rest of her distinctive facial features. Chocolate brown contacts concealed her natural, hazel-green eye color. An extremely risky surgical tweaking of her vocal cords changed her voice. Painful laser surgery permanently altered her fingerprints. Her trademark raven hair was professionally colored to a vibrant auburn hue that beautifully complemented her new skin tone. Keshari Mitchell ceased to exist, and Darian Boudreaux was born.

From the day Keshari Mitchell and David Weisberg, her longtime attorney and friend, sat down together and privately constructed, step-by-step, the intricate scheme to fake Keshari’s demise, David had formed dummy corporations, a wealthy familial background, an inheritance fund, and a sizeable investment portfolio to legitimize both Darian Boudreaux and her more than $100 million net worth. It had taken years to pull it all together, but REAL gangsters always had a strong exit strategy…just in case.

Before making the strategic and very expensive Mission: IMPOSSIBLE-style escape to Sao Paolo, Brazil, Keshari Mitchell, now Darian Boudreaux, had been one of the most powerful businesswomen in the United States. As founder and sole owner of a tremendously successful, multimillion-dollar record label, Larger Than Lyfe Entertainment, she had been the most powerful woman in the music industry. Unknown to most, there also was a far darker side to Keshari Mitchell. As second-in-command in The Consortium, one of the chief West Coast distributors of Colombian and Mexican cocaine, Keshari Mitchell had, undisputedly, been one of the most powerful women in organized crime…and she’d wanted OUT…completely…of an arrangement that was, nonnegotiably, blood in–blood out.

Ironically, the more Keshari Mitchell wanted to distance herself from the criminal organization to which she belonged, the more the duality of her life that existed on both sides of the law unraveled. A DEA special task force operation mounted pressure against Keshari in an attempt to coerce her to testify before a federal grand jury. The DEA’s goal, via information they hoped to acquire from Keshari Mitchell, was to take down all of the major players in The Consortium, then go after the Mexicans and Colombians who supplied The Consortium with cocaine. Keshari Mitchell knew that the only outcome for anyone in her line of business who cooperated with the law was death, and she made it clear to DEA that they would get nothing out of her. Rumors about the intensely private music mogul began to pop up on the covers of entertainment tabloids nationally. Both intimate details about her romantic life as well as careful “hints” regarding her alleged affiliation to a well-known, West Coast, criminal empire became the media’s focus. An almost successful assassination attempt was made on Keshari’s life. Then, when it seemed that matters could not become any worse, Keshari was framed by some unknown saboteur and arrested on murder-for-hire charges in conjunction with the prison death of Richard Tresvant, the notorious founder and head of The Consortium, who’d gone untouched for years as he mercilessly ran The Consortium, then was convicted for first-degree murder and had been awaiting a new trial on appeal.

With the deck stacked entirely against her, the ONLY way out of the colossal mess that had become Keshari Mitchell’s life was by death and, in an intricate scheme planned between Keshari and her long-time attorney, she committed what authorities called “an apparent suicide,” and immediately fled the United States for the anonymity of one of the most populous places on earth, São Paulo, Brazil.

Hours turned to days, days turned to weeks, and weeks turned to months as Keshari Mitchell, now Darian Boudreaux, attempted to adjust mentally to her new identity and her new home. It had taken nerves of steel to carry out her plan of escaping to Brazil. Then, from day one after her arrival, she was often consumed by the fear of someone discovering the truth of what she’d done and that she was still alive. In her chic, ultra-modern hotel suite at the InterContinental, she often snapped awake in the middle of the night in a cold sweat, having dreamt of the Mexicans torturing and then murdering her in some horrific way after having found her in Brazil. Other nights, she dreamt of the almost successful attempt that had been made on her life, a bullet having missed her head by inches as she lay sleeping in her bed, goose down everywhere, the dead stranger who’d been hired to kill her lying on the grounds of her home, taken down by her security team.

As time passed, there were days when she was ridden with depression, feeling completely out of sorts, unable to even bring herself to get out of bed, unable to eat, unable to function, unable to compose her next plans. She would be ridden with intense feelings of sadness, frustration, hopelessness. She wondered if she should simply end it all. There was no way that she could make a life out of the limbo in which she now lived. She had carefully strategized a plan to get her away from her former life, but she had not fully weighed the emotional price she’d pay once she walked away from it all and into the unknown.

On impulse one afternoon when she’d finally compelled herself to start getting out and familiarizing herself with her new city, Darian did the unthinkable. She reconnected with her former life by sending an anonymous postcard to her former love… the former love of Keshari Mitchell…West Coast general counsel for ASCAP, Mars Buchanan. With the unbridled stupidity of that impulsive move, she instantly jeopardized both her life and the life of the man she loved. Never in a million years did she think of what would happen next. Mars Buchanan gave up everything, resigned from his role at ASCAP, told his family that he was taking a trip and scoured Brazil until he found her…and married her.
Cynthia Diane Thornton

Cynthia Diane Thornton is the author of Larger than Lyfe and Rise of the Phoenix. She resides in Los Angeles.