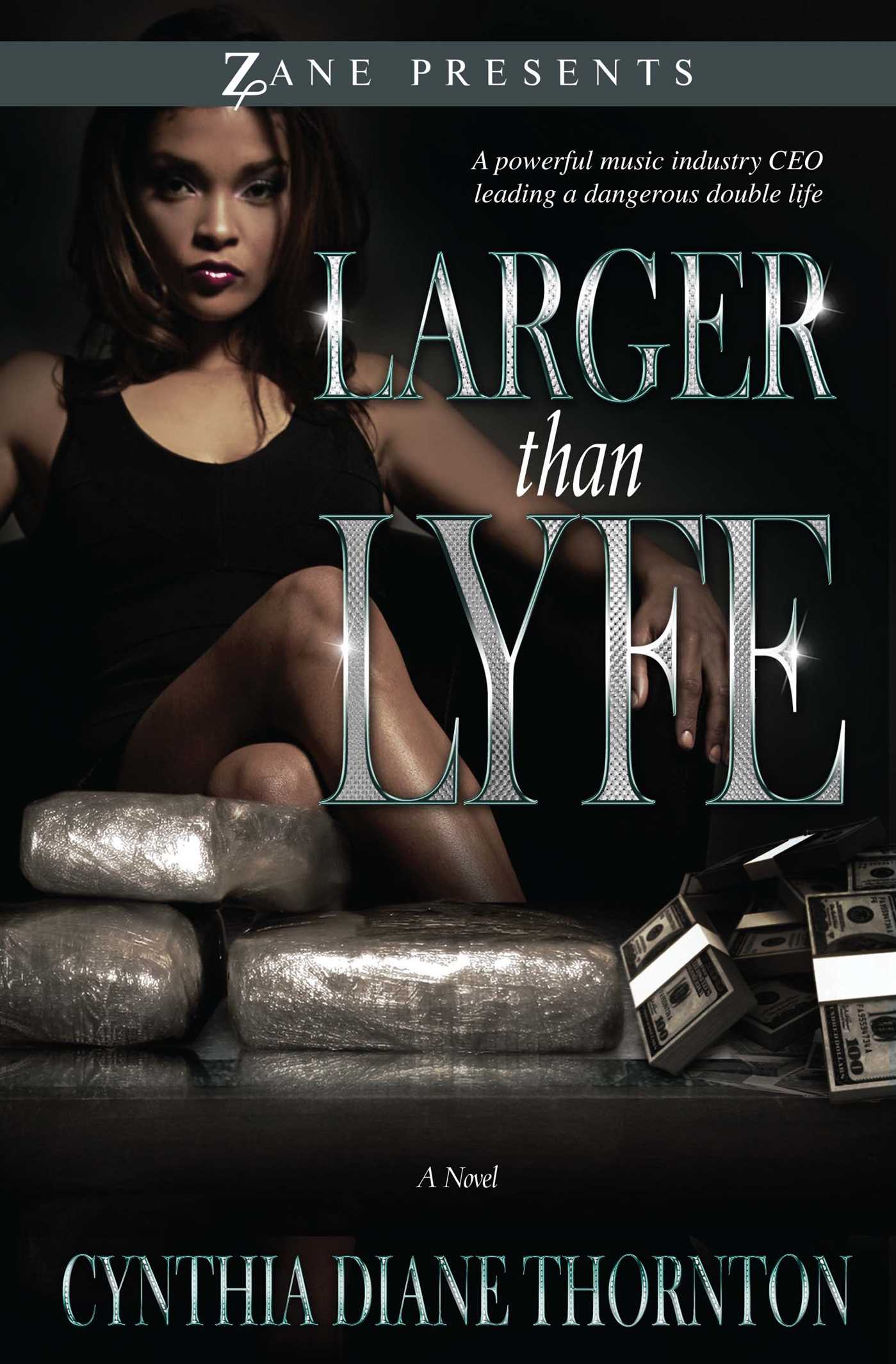 Beautiful, Wharton-educated, recording industry mogul Keshari Mitchell is leading a double life. As owner of Larger Than Lyfe Entertainment, a multimillion-dollar record label specializing in platinum-selling hip-hop, R&B, and jazz, she is undeniably the most powerful woman in the American music industry. As second-in-command in The Consortium, one of the most powerful, Black organized crime rings on the West Coast, she also happens to be one of the most powerful and most feared women in the United States’ criminal underworld.

But she wants out—out of an organization that does not accept resignations. As Larger Than Lyfe unfolds, readers receive a VIP pass into Keshari Mitchell’s very glamorous but extremely dangerous life. Readers get a taste of the decadence, drama, and hedonism so prevalent in the music industry, while also viewing the dark side of organized crime where millions of dollars are made and controlled from the trafficking and sale of cocaine, where law enforcement can be bought and corrupted, and where lives can be snuffed out strategically and without remorse at any given time to protect and expand criminal empires.

Keshari Mitchell is on the verge of total meltdown as she works desperately on a daily basis to keep the stressful duality of her life as record industry mogul and increasingly reluctant crime boss separate. This most complex predicament is complicated all the more when she breaks her own rule regarding romantic entanglements and falls in love with the handsome, new, West Coast general counsel at ASCAP (American Society of Composers, Authors and Publishers).

A caravan of black, customized Suburbans coasted swiftly up Alameda Street, across Broadway, and into Long Beach’s deserted industrial section near the waterfront. It was almost 2 a.m. and virtually all of the shipping and manufacturing facilities in the area were closed down for the night, scheduled to reopen for their daily business around 6 a.m.

The caravan of expensive SUVs pulled onto the graveled lot of a white brick warehouse at the darkened end of Third Street. The driver in the first truck pressed the buzzer at the warehouse entrance. The warehouse’s tall, steel doors rolled open. The caravan of trucks pulled smoothly inside. The doors rolled shut again behind them.

Four armed men, with the kind of muscular bulk acquired during lengthy stints in state and federal prison systems, hopped out of the front and rear vehicles and checked the warehouse’s perimeter. After confirmation that the warehouse was secure, one of the men gave a signal to the middle truck’s driver. The driver hopped out and held open the Suburban’s rear door and out stepped Keshari Mitchell, tall, brown, exotic-looking, clad in black leather Chanel, with a long, sleek, braided ponytail and striking, almond-shaped green eyes. She strode with refined confidence over to the center of the warehouse where her business associates awaited her, her bodyguards watching everything around them as if they were protecting the President.

“Ms. Mitchell,” Javier Sandovar said graciously, taking Keshari’s hand, “so good to see you again. Why don’t we get right down to business?”

Mario Jimenez and Oso Suarez, two of the bulky, tattooed men who’d accompanied Javier Sandovar, whipped five, large utility cases onto the table and clicked them open. Inside each of the utility cases were fifteen kilograms of 80 percent pure, Colombian cocaine. With smooth precision, Oso Suarez cut a small slit in one of the large, plastic packages of white powder. With the blade of his knife, he scooped out a small amount of the powder and dropped it into a tiny test tube. He added solution with a dropper to confirm that the product he’d brought was exactly what Keshari had come to buy. The mixture of the solution and white powder turned a bright blue.

“Very nice,” Keshari said, removing a gold, Cartier cigar holder and lighter from her clutch. She clipped the cigar’s end and lit it, exhaling a pungent cloud of the expensive, Cuban cigar smoke into the air. Javier smiled at her and nodded, pleased with her approval.

Keshari nodded to one of the bodyguards, who pulled two large duffle bags from the rear of the middle Suburban and brought them over to the table, unzipping them to display crisp, new hundred-dollar bills bound together in ten thousand-dollar stacks. Oso Suarez carefully went through each of the duffle bags to confirm that all of the money was there. He nodded to Javier.

“Very good, then,” Javier said. “We’ll see each other again in one month. The offshore accounts will be in place. Payment is expected upon confirmation of completion of each delivery.”

“Of course.” Keshari smiled, Javier kissing her on both cheeks.

“By the way, we have been following Mr. Tresvant’s upcoming trial,” Javier said. “Tell him that we send our regards and support. It is all most unfortunate. My family hopes that his current situation will not interfere in any way with our business relationship. Murder charges against powerful, Black men tend to draw federal attention.”

“I assure you, Javier, and I ask that you pass my assurances on to the rest of your family. All bases are covered. We look forward to Richard’s exoneration on all charges and a very prosperous future between our two organizations.”

“Let us hope so.” Javier smiled.

Keshari strode over to her waiting car and slid inside while her bodyguards kept a watchful eye on Keshari’s business associates and the product that their organization had just purchased. Two of them loaded the cases of cocaine into the front and middle SUVs. The warehouse doors rolled open. Keshari’s bodyguards all loaded into the three trucks. A moment later, the caravan of black automobiles disappeared back into the early morning darkness.

Cynthia Diane Thornton is the author of Larger than Lyfe and Rise of the Phoenix. She resides in Los Angeles.