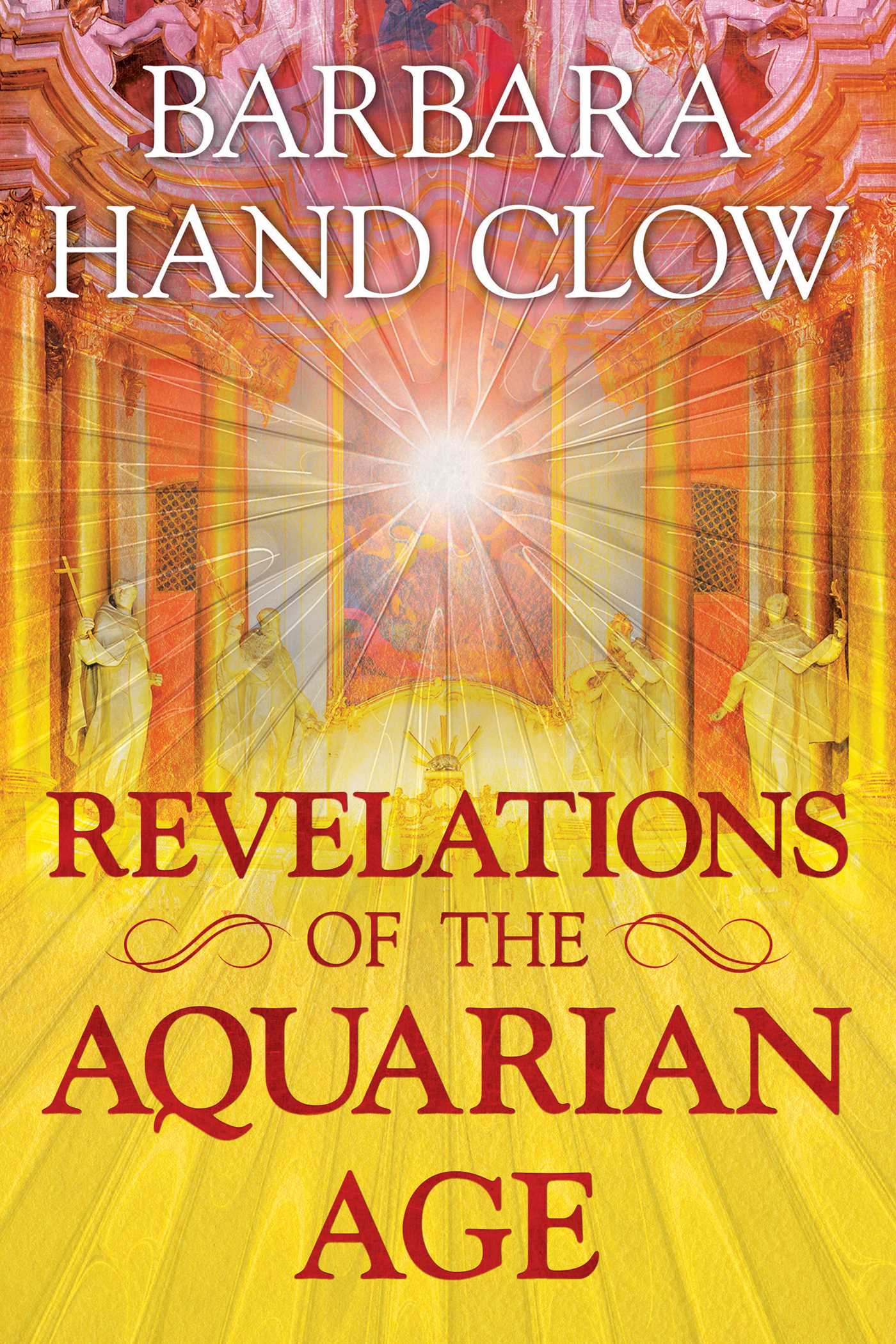 Revelations of the Aquarian Age

• Continues the story from Revelations of the Ruby Crystal

Shortly after his wedding at his family’s ancient castle in Tuscany, sophisticated and mysterious Armando Pierleoni reveals his richly symbolic painting of the love between Jesus and Mary Magdalene to his bride Jennifer. Deeply affecting all who view it, the alchemical portrayal leads Armando, Jennifer, and their friends on a contemporary journey into the esoteric mysteries of divine marriage, sacred sexuality, the Black Madonna, and the transformative power of holy relics.

The group of friends--Jennifer’s journalist brother Simon, his mystical wife Sarah, Jungian analyst Lorenzo, exotically beautiful and insightful Claudia, and Armando and Jennifer--discover past-life connections and the power of sacred sex as a path to the divine. They explore how the Knights Templar collected the bones of the Jesus family from the Talpiot tomb in Jerusalem and eventually placed them in reliquaries throughout the world--including within the Medici Chapel in Florence and in the Four Corners region of the American Southwest.

When Armando’s magical painting of Jesus and Mary Magdalene goes on display in the Medici Chapel and is viewed by thousands, the painting’s power coalesces with Aquarian vibrations to trigger a mass kundalini rising within the Chapel, activating the sacred bones in the reliquaries. The activated bones enable the Light to flow into the world, awakening Christ Consciousness around the globe.

Sarah began thoughtfully, “The Lost Gospel is a very controversial book because the authors cobbled together a strong argument that Joseph and Aseneth is actually an early Christian text from the early first century when Jesus and Mary were alive. Other established scholars have already successfully argued it is a Christian text, not Jewish, so that idea is not controversial. But, they go way beyond that: they argue that Joseph and Aseneth are stand-ins for Jesus and Mary Magdalene and tell the story of the marriage of Jesus and Mary Magdalene and their children in this coded manner to protect their love story because the false model of Jesus was being invented and taking over. As a Patristics scholar, I think they’ve made a very strong case for general readers. If they are right, the implications are astounding because the core message, Mary and Jesus’s secret teaching, is that marital sex is redemptive. That’s a revolutionary and extremely healing message, Claudia.” Sarah was about to say more, but Claudia was so excited she interrupted her while standing up to go pace by the window.

“I agree, Sarah! Joseph and Aseneth is evocative and deeply sensual. Once I read it, I couldn’t erase the images of their love in my mind, and then I saw Armando’s painting of Jesus and Mary. He doesn’t know anything about these symbols, yet that bee came right through him, a symbol for the Magdalene as Artemis. Subconsciously, Armando knows about the connection between Artemis, Mary, and the bee. He spends a lot of time in Siena Cathedral where there is a medieval version of Artemis on each side of the Last Supper window high above the front entrance. Artemis stares down at every Christian who comes through the front door. Her goddess presence frames the Last Supper! Mary Magdalene has been right in our faces in Siena Cathedral for eight hundred years! It’s a medieval joke on the patriarchal fairy story and a great example of how the secret tradition was kept alive in art. But, why?”

Sarah paused for a moment and then jumped back in. “You’re right, Claudia. The early Church fathers were preoccupied with Greek dualism and asceticism, so they recast the sensual Jesus as an unmarried, celibate eunuch. This was outrageous since the Bible tells us that even Peter was married. They insisted Jesus only appeared to be human, since he was divine. The anti-sex dualists insisted that since Jesus was a real live man and also divine, he had to have been celibate. Time rolled along, people forgot the real story, and eventually priestly celibacy became the basis for the hierarchy--which made Jesus into a wimpy Christ invented by dualistic ascetics who hated women. When Jesus and Mary were alive, the religion of the great goddess Artemis was sensual and deeply sexual. The people loved Artemis, and Mary Magdalene was her priestess. We need the goddess teachings about fertility and sensuality to recover our sanity and protect Earth! That’s why The Lost Gospel is so important, yet dogmatic theologians will try to bury it.”

Claudia came back to sit down then stood right back up; she was wound up like a tight violin string. “The timing of this translation is something to consider,” she said. “Let’s not leave out Karen King’s 2012 announcement of the fragment that says Mary Magdalene was the wife and disciple of Jesus. Another 2012 breakthrough along with the verification of String Theory and the science of the planetary midline. Assuming these 2012 breakthroughs mean we’re getting somewhere, this new translation and analysis means the religion of the great goddess in harmony with Earth is coming back. This has to happen because the hierarchy’s denial of healthy human sexuality is threatening us with extinction. The Church’s prohibition against birth control alone has created overpopulation, which is strangling nature and human culture.

“And I’ll go even further than that,” Claudia continued excitedly. “Timing reveals all: The Lost Gospel is another big breakthrough at the end of the Mayan Calendar because it reveals 5 what was really happening when Jesus was on Earth as the Age of Pisces arrived. The transition out of Aries into Pisces emphasized human compassion, a force that could end war. The angry judgmental God had to go because Jesus, a god of love, incarnated to experience sacred sexuality. But Yahweh was chosen over Jesus. The Lost Gospel portrays Jesus uniting with the goddess, the resolution for the cosmic separation of Sophia and Lucifer in the Gnostic creation story. That is why the Church crushed the Gnostics, don’t you think?” Sarah nodded in agreement so Claudia went on.

“The patriarchy completely distorted the image of Jesus as a sexual male who loved the goddess. They castrated Jesus and called Mary a whore, almost aborting the Age of Pisces. But now at the end, we can see that the Age of Pisces began with the sacred cosmic marriage--the secret tradition. We need this story so that both sexes can emulate this ideal in marriage to create sexual harmony to terminate warfare and the denigration of women. Sarah, I’m sorry for talking too much, but I can’t stop myself now that I finally have real love myself!

“Being born a woman was worse than death when men killed for sport, raped for fun, and destroyed sacred sex. It had to change, which is why Jesus incarnated to find Mary. The story of their love and marriage in Joseph and Aseneth is the story of redemption through love and compassion, the essence of the true Piscean Age. That is why Jesus came down from on high--a cosmic miracle. This huge truth finally came out in 2012, and now millions will realize Jesus was a sensual, heterosexual man. Of course, millions already know this from the DaVinci Code and Karen King’s fragment. However, this explicit story in Joseph and Aseneth informs us Jesus and Mary were having sex and celebrating it.”
Barbara Hand Clow

Barbara Hand Clow is an internationally acclaimed ceremonial teacher, author, and Mayan Calendar researcher. Her numerous books include The Pleiadian Agenda, Alchemy of Nine Dimensions, Awakening the Planetary Mind, Astrology and the Rising of Kundalini, and The Mayan Code. She has taught at sacred sites throughout the world and maintains an astrological web site, www.HandClow2012.com

“This fascinating novel illustrates the connection between Mary Magdalene, Jesus, and the hidden secrets of a bloodline that would threaten the very existence of conventional Christianity. It is riveting, and it helps explain many uncertainties about world religions and even our own government. A must-read . . .”

– Nicki Scully, author of Sekhmet: Transformation in the Belly of the Goddess

“. . . a cosmic journey and the story of the hidden history of humanity whose wisdom secrets have been repressed by the patriarchy to keep humanity from realizing its spiritual potential. Barbara Hand Clow opens the door to understanding the importance of the Divine Feminine to heal our world and why the wisdom once taught by Jesus and Mary Magdalene, which was repressed by the Church for over 2000 years, is so crucial to the time we are living in now.”

– Tricia McCannon author of Return of the Divine Sophia

“A novel bound to enthrall those who were captivated by The Da Vinci Code. Well written and full of mystery.”

– Graham Phillips, author of The Chalice of Magdalene

“An extraordinary new offering from one of the world’s top visionary writers. Revelations of the Aquarian Age is a beautiful blend of wisdom and drama played out by a compelling cast of characters. A must-have for anyone seeking answers to the most profound sacred mysteries regarding humanity’s divine cosmic origins.”

– Andrew Collins, author of Göbekli Tepe: Genesis of the Gods and The Cygnus Key

“Revelations of the Aquarian Age is a roller coaster of mystical downloads cleverly wrapped up as a well-researched work of fiction. I absolutely love the author’s methodology of getting these ripe jewels into as many hands as is worldly possible. Blessings upon you, Barbara Hand Clow.”

“Barbara Hand Clow is a modern-day shamanic storyteller. The energy layered within her fictional work is all-seeing. She is indeed one of those very rare individuals with the ability to enlighten those who seek an alternative answer to the evil that currently envelops our world. Revelations of the Aquarian Age gives the reader the eyes to see what is hidden in plain sight. Her research, historical insight, multidimensional layering of detail and character development takes my breath away. Above all else, her novel’s underlying message--that universal love and compassion will triumph over evil--is a celebration of the human spirit.”

“Revelations of the Aquarian Age is a novel brimming with spiritual insights and ‘heretical’ lore, whose plot weaves around a modern alchemical painting of Jesus and the Magdalene. The author deftly uses the surfacing of secrets guarded by two ancient Italian families--the Medicis and Pierleonis--to stage what is in effect a plausible scenario for the real start of the Age of Aquarius: Christ’s Second Coming.”

“This book takes the reader into an unseen world of intrigue, mystery, and other dimensions. Recent historical discoveries exposing the motives behind the manipulation of facts by organized religion are brought to light as the world moves into the Aquarian Age. I’m looking forward to reading the next one! Another must-read by this enormously gifted author.”

"There are many delightful aspects to each of the characters, revealed as they are led through their esoteric encounters and adventures. The events of the book are set against the dire events occurring in the world at that time, particularly the horrific perpetrations of ISIS. None the less, I found reading this book engendered hope and inspiration as I was swept into the power of sacred sexuality embraced by Jesus and Mary Magdalene. I found reading it offered me an oasis from the surrounding Covid 19 pandemic and the human darkness revealed in today’s world. May the Age of Aquarius bring us all the healing Barbara Hand-Clow envisions."

Revelations of the Aquarian Age