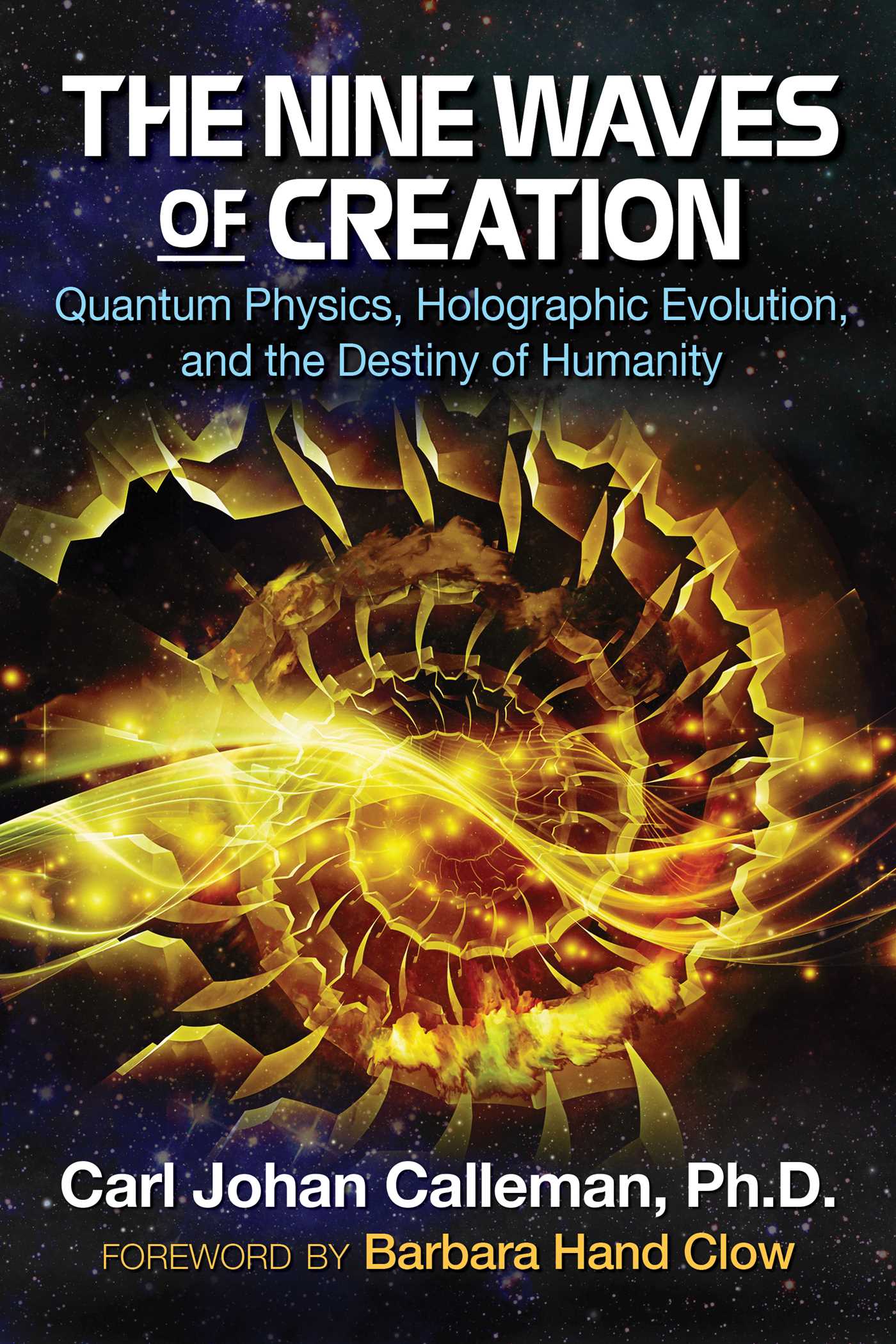 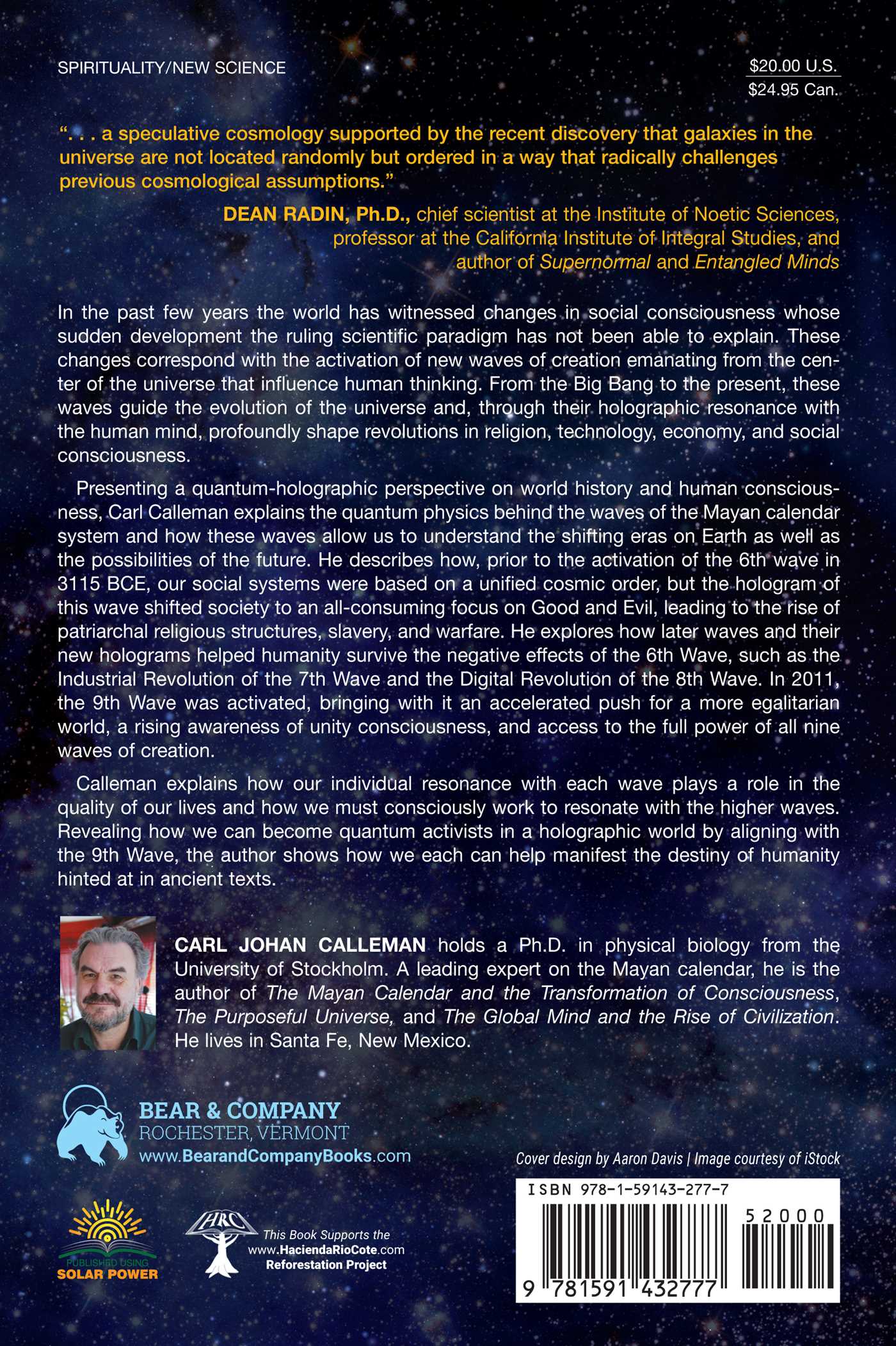 In the past few years the world has witnessed changes in social consciousness whose sudden development the ruling scientific paradigm has not been able to explain. These changes correspond with the activation of new Waves of Creation emanating from the center of the universe that influence human thinking. From the Big Bang to the present, these Waves guide the evolution of the universe and, through their holographic resonance with the human mind, profoundly shape revolutions in religion, technology, economy, and social consciousness.

Presenting a quantum-holographic perspective on world history and human consciousness, Carl Calleman explains the quantum physics behind the Waves of the Mayan Calendar system and how these Waves allow us to understand the shifting eras on Earth as well as the possibilities of the future. He describes how, prior to the activation of the 6th Wave in 3115 BCE, our social systems were based on a unified cosmic order, but the hologram of this Wave shifted society to an all-consuming focus on Good and Evil, leading to the rise of patriarchal religious structures, slavery, and warfare. He explores how later Waves and their new holograms helped humanity survive the negative effects of the 6th Wave, such as the Industrial Revolution of the 7th Wave and the Digital Revolution of the 8th Wave. In 2011, the 9th Wave was activated, bringing with it an accelerated push for a more egalitarian world, a rising awareness of unity consciousness, and access to the full power of all Nine Waves of Creation.

Calleman explains how our individual resonance with each Wave plays a role in the quality of our lives and how we must consciously work to resonate with the higher Waves. Revealing how we can become quantum activists in a holographic world by aligning with the 9th Wave, the author shows how we each can help manifest the destiny of humanity hinted at in ancient texts.

The Hologram of Good and Evil

The Tree of Life in Ancient Representations

The cosmology of Nine levels is, as we have seen, practically ubiquitous among the traditional cultures of our planet and the same can be said about serpents and dragons symbolizing spiritual Wave movements. Our inquiry, however, began with the recent discovery of the Cosmic Tree of Life and we have continued on to verify that the universe is created by a series of Waves emanating from this Tree of Life. Yet, only a few examples have been given of how the ancient cultures looked upon the Tree of Life. Naturally, our interest in the Tree of Life becomes greater when we know that it is not a fantasy and this is a reason to explore what additional hints about its role and function we may gain from such ancient traditions.

The Destiny Chart of Humanity

Depending on what Wave you are in resonance with, the effects of the different holograms in figure 4.2 will structure your mind and perception of reality. The different holograms for instance provide an explanation to why the worldview of the ancients (6th Wave) was not the same as our own (essentially 7th–8th Wave). Human beings understand their world based on the information they receive through the particular filter the hologram provides them with. Moreover, if we resonate with a particular Wave and a corresponding hologram, we will attract people and circumstances that are consistent with these. We then together tend to create a reality consistent with a particular hologram, and often resist everything that seems inconsistent with this. Our external reality is thus created in accordance with the principle of As Inside, So Outside.

Among many other things, these holograms also provide an explanation for how the basic social relationships have changed over the course of human history: People have projected the polarities of the holograms onto the world and then created social realities consistent with these. Figure 4.2 shows in a simple form the times of activation of the different holograms dominating the human mind as well as very broadly the social consequences of these holograms. The holograms of the 5th, 7th and 9th Waves tend to create egalitarian societies, whereas those of the 6th and 8th Waves, where reality is perceived through a left-right polarity, tend to create unequal social realities (see fig. 4.3). More broadly, all of human history can be understood from the shifts between the different polarities of the holograms in figure 4.2 and how the shifting polarities of the human mind determine history. The most fundamental shifts in the human mind take place as a result of the activation of new Waves.

In my view, figure 4.2 is the most important chart of this book as it is from this we can broadly understand how the human mind has been shifting over time as well as what holograms are available for us to resonate with at the present time. Interestingly, if we look at the sequence of holograms in this figure, we can see that in the course of the climb to higher Waves, humanity is going through a process from unity in the Fifth Wave through separation created by the introduction of the dark filters of the Sixth, Seventh and Eighth Waves and then a return to unity with the Ninth Wave. This idea of a return to unity is prevalent in several religions (including all the Abrahamic) and spiritual traditions and maybe this is the first time that it has found a rational explanation.

We can furthermore see that the filters of the holograms even if they, as looked upon one by one, are polarized, in the end even out so that over the course of the climb both hemispheres, left and right brain half, will receive the same amount of light from the holograms. Some would refer to the change that this climb entails as “raising our vibrations” or “entering a higher state of consciousness.” However, I tend to think that the concept of consciousness is too vague to be useful when it comes to outlining the future of humanity. Not every state of consciousness means a step forward and what is meant by a “higher” consciousness may be hard to define. It is more precise to talk about transiting from a specific hologram to another, and in the process of doing so, increasing the frequency of our beings with the higher Waves. In line with the ancient Egyptian view of the Tree of Life, I would like to call figure 4.2 the Destiny Chart of Humanity. Climbing to the Ninth Wave, and downloading a hologram without any filters or duality in this view amounts to the fulfillment of the destiny of humanity.

Since there is a correspondence between the holograms in figure 4.2, and their frequencies, we can now begin to understand the origin of everyday expressions such as “being on the same wave-length” or “resonating with someone,” to denote getting along well. Frequencies talked about in such expressions obviously do not refer to visible light or sounds, but by the much more profound similarities between two persons who download the same hologram. In general, people whose minds are shaped by the same holograms are “on the same wavelength” and “resonate” with each other as they see the world through the same filter (see fig. 4.4). Such resonances with the same Wave are what generate synchronicities, involving people downloading the same hologram. Quite unbeknownst to themselves, different people may be involved in the same processes and experience synchronicities if they are in resonance with the same Wave, or specific interference patterns between different Waves.
Carl Johan Calleman

“The Nine Waves of Creation presents a speculative cosmology supported by the recent discovery that galaxies in the universe are not located randomly but ordered in a way that radically challenges previous cosmological assumptions. If Calleman’s ideas--which are refreshingly wild but rationally argued--are even partially correct, today’s assumptions about the nature of evolution and the evolution of nature will need to be reconsidered.”