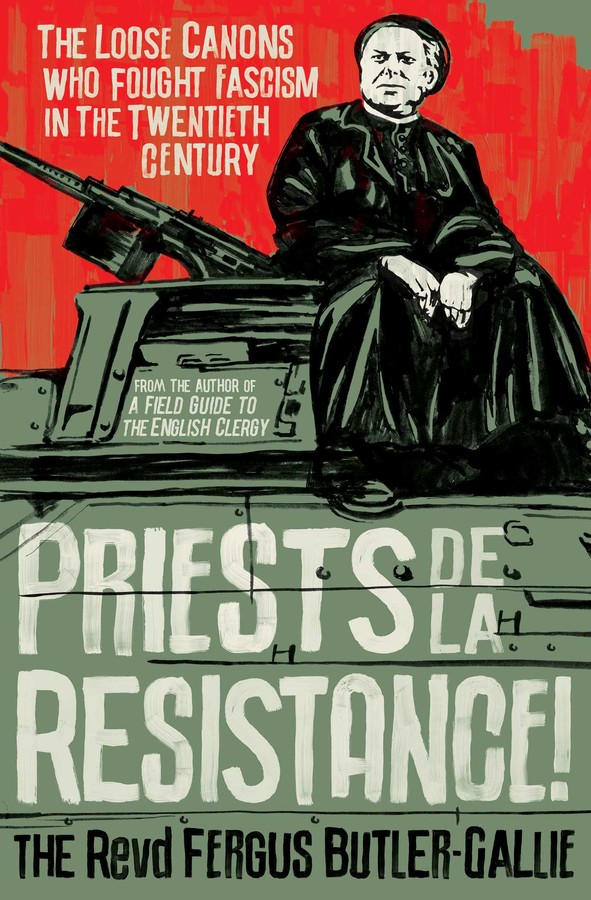 By The Revd Fergus Butler-Gallie
Published by Oneworld Publications
Distributed by Simon & Schuster
LIST PRICE $20.00
PRICE MAY VARY BY RETAILER

‘A hugely enjoyable, eccentric account of clerical heroism in the face of evil.’ Observer

‘Comedy and tragedy run side by side… Bracing and lively.’ The Times

‘An admiring study of priests and ministers who have put their lives on the line.’ BBC History Magazine

Who says you can't fight fascism in a cassock?
Wherever fascism has taken root, it has met with resistance. From taking a bullet for a frightened schoolgirl in Alabama to saving Greek Jews from extermination by way of fake IDs, each of the fifteen hard-drinking, chain-smoking clerics featured in this book were willing to risk their lives for what they believed.

– Spectator, BOOKS OF THE YEAR

‘This winter’s best title is Fergus Butler-Gallie’s work on wartime heroics by the clergy.’

‘A timely and uplifting book… An hugely enjoyable if slightly eccentric account of clerical heroism in the face of evil… [Butler-Gallie] achieves an inspiring effect through the sheer cumulative impact of so many brave decisions.’

‘… this book is a gripping story of bravery, derring-do and cunning in the face of Fascism… vividly told tales of 15 people who became caught up in the struggles against Fascism in Europe in the 1930s’

’15 short, engaging essays… The reverend is a good writer with a light touch, and a natural storyteller.’

‘… it is refreshing to read an unashamedly admiring study of priests and ministers who have put their lives on the line… readable and moving.'

‘Here the Reverend Butler-Gallie wittily profiles 15 “loose cannons” who stood up against fascism’.

‘Butler-Gallie serves them and their stories well with background information, a fluent narrative style, and a fine eye for the quirky and telling personal or historical detail.’

'As entertaining as it is erudite, this enthralling anthology presents a cornucopia of quirky, courageous Fascist-fighting clerics.'

‘A field guide to 20th-century priests, monks and nuns from all over the world who were prepared to die for their faith and to die saving others... He proves it true that comedy and tragedy run side by side, and that some of the most unlikely people turn out to be saints and martyrs... Bracing and lively.’

‘Deserves a wide readership. It could be argued that it took allegiance to a higher power than secular Messiahs to support resistance to the most hateful regimes of the 20th Century.’

5* review: ‘a joyful and funny book, about some fascinating, brave and at times eccentric characters, who did what was right because it was right, regardless of the potential personal cost… I was left wanting to know more about all of them.’

‘The history of Christianity during World War II is not pretty, as many leading Church figures collaborated with the Nazis and gave succour to anti-Semitism. A handful of religious people stood tall and met the challenge – the little-known men and women vividly described in these fascinating pages opposed both fascism and religious authority to fight the true good fight. If only there had been more like them!’

– Matthew Cobb, author of The Resistance

Praise for A Field Guide to the English Clergy:

‘A group biography of ecclesiastical nuttiness… All gloriously mad.' The Times, Books of the Year 2018

‘Eye-popping tales of lunacy, debauchery and depravity…Butler-Gallie knows whereof he writes, being a curate himself, and he has done a splendid job presenting a smorgasbord of most peculiar parsons.' Sebastian Shakespeare, Daily Mail

‘We have…always kept a special haven for oddballs in the Church of England, as Fergus Butler-Gallie demonstrates in this entertaining compendium…Their foibles cover all bases from absentmindedness to epic drunkenness…I'm glad I read this one. It's a lot of fun.' The Times

‘Entertainingly erudite…But it is also a surprisingly profound work…For all its mischief, Butler-Gallie's work of lightly worn erudition is a paean to a great English institution, finely tuned to the temper of its representatives, good, bad and indifferent. We should treasure it more.' Literary Review

‘A humorous compendium of some of the oddball clergy who have served the Church over the centuries...These thumbnail portraits reveal a very broad church indeed.' New Statesman

‘The Church of England has produced some real oddballs in its time, and this is an entertaining gallop through several centuries' worth of them…Butler-Gallie has done his homework, digging out some rare gems…This is the story not just of eccentrics, but also of a leisured age that is no more.' Harry Mount, Spectator

‘Wonderfully entertaining…A hilarious yet thoughtful reminder that the Christian faith wasn't always thought incompatible with a sense of humour or a healthy bolshiness.' Sunday Times

‘It may have the makings of a modern classic…Butler-Gallie chronicles not just Anglican follies, but also human weaknesses which we all share and with which we can perhaps sympathise.' The Catholic Herald

‘This is a ridiculously enjoyable book: funny, compassionate, and wonderfully well-written.' Tom Holland

By The Revd Fergus Butler-Gallie
Published by Oneworld Publications
Distributed by Simon & Schuster
LIST PRICE $20.00
PRICE MAY VARY BY RETAILER

More books from this author: The Revd Fergus Butler-Gallie