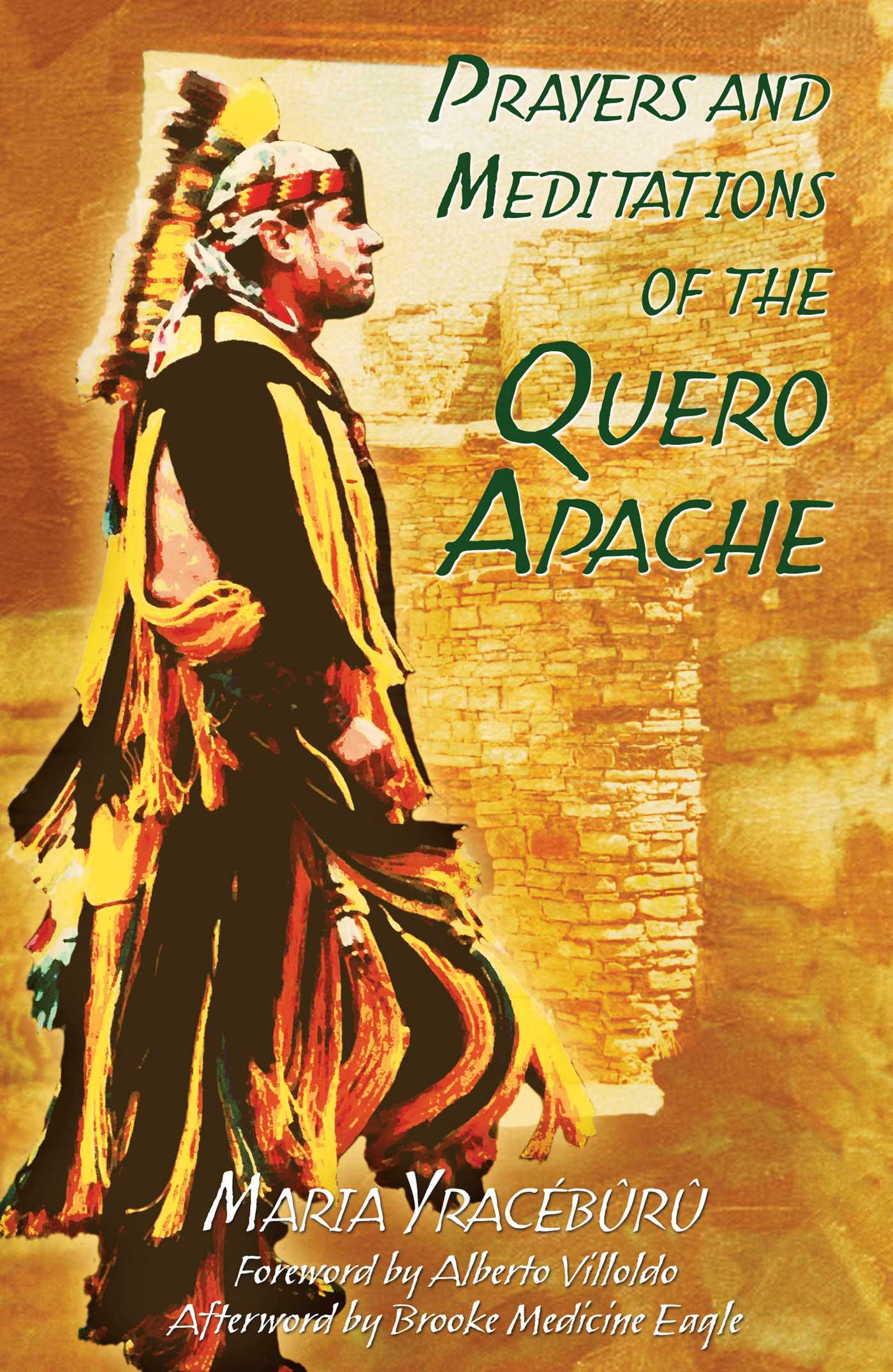 Prayers and Meditations of the Quero Apache

Teaches the traditional Quero Apache meditative practice of entering the silence--a combination of prayer, meditation, and breathwork--as a path to spiritual healing and enlightenment

• Offers easy-to-follow instructions for how to conduct the practice

• Written by a living descendant of Apache prophet Nochaydelklinne

The Quero Apache Snake Clan, or Tlish Diyan, center their spiritual practice on the daily ceremony of Doowaa-gon’ch-aada, “entering the silence.” A combination of meditation, breathwork, and prayer, Doowaa-gon’ch-aada offers an experiential connection to All That Is from the Earth-based spiritual traditions of indigenous America. When performed properly, this ritual becomes a path to self-realization and transcendence.

Prayers and Meditations of the Quero Apache explains how to establish a personal practice. In addition to 24 prayer wheels, easy-to-follow instructions for the ritual, and accompanying pieces of inspirational artwork, the book includes a rare overview of the spiritual philosophies of the Quero Apache. The author incorporates her own stories and essays into the text in order to share the wisdom she has gained as daughter of the Tlish Diyan, granddaughter and apprentice of Apache holy man Ten Bears, and descendant of the prophet Nochaydelklinne.

Writing on the Water

There were once people who lived profoundly on this planet, people who lived in reciprocal, respectful relationship within the ecosystems of which they recognized themselves a part and whose sacred nature they knew and understood. These people lived lives in which their everyday actions were akin to, and in harmony with, the greater movements of the universe--they blended the sacred and the irreverent, the past and future, time and timelessness in the present moment. They were people who inherited an uninterrupted transmission of the knowledge of a way of being that stretched back to their mystical and distant ancestors. They knew the anatomy of the land in which they lived--they dreamed its dreams, learned what it taught, and felt the same pulse of life flowing through the veins of the universe that they heard singing within their own bodies. Some carry on this life philosophy today.

In Tlish Diyan philosophy, humanity is understood as living in a shared cosmos that is mysterious and expresses profound spiritual evidence of the divine power behind all natural phenomena. While all nature is considered sacred and its mystery and beauty appreciated as a bridge between human consciousness and the Sacred, the purpose or mission of human life is to be that of acting on behalf of ihi'dahí (life force), and the understanding of this concept is found through life affirming ritual.

I have learned that growth is achieved through circular, spiraling motion, which the Ancestors have called shi tsuye tlendil, "four spiraling together," a term that evokes the power of the Circle. The first three ascending spirals of Tutuskya--nohwizá' yé biké' é ("following the ancestors' tracks"); nohwizá' yé zhiheego ("living in the way of the ancestors"); and nohwizá' yé bi kigoya' íí ("sharing ancestral wisdom")--begin and are completed within this life experience. The fourth (actually the hub of the spiral) nohwizá' yé bizhíí ("speaking with the ancestor’s voice") though begun here, is completed by few during this earth walk, yet goes on through the transition of death and rebirth.

The directional energies contained within this sacred spiral describe the condition that characterizes the state of human existence and the way to transcend it, and are considered the core of the Tlish Diyan power. Essential for daily personal ceremony is the state of doowaa-gon' ch-aada (entering the silence), or a time of no-thought. A simple method for achieving this state is to create a sacred space. This is a space where respect is honored above all things. It is a place you create that is yours alone and in which you seek sanctuary from the daily hubbub of life. It is where you must be totally honest with yourself and Spirit as you come to seek guidance, to be nurtured, and to honor those that assist you.

Each wheel begins with a prayer that opens the circle, alerting those of the spiritual plane to your intent. This is followed by the directional prayers: South, the direction of trust, emotions, and the inner child, represented by the Snake totem and power of transmutation; Southwest, the nurturing of the Thunderbeings and the place of visioning; West, introspection, dreams, and physical healing are attended to by the Bear totem; Northwest, the Winds of Change and Sacred Universal Laws are presided over by the Little People (fairies, elves, menahunes, etc.); North, abundance, wisdom, prayer and gratitude as overseen by the Buffalo totem; Northeast, the direction of gentle transformation and the great Master Teachers known as kachiñas; East, illumination, clarity of Spirit, the fire of creativity, the energy of beginning and ending as observed by the Eagle totem; Southeast, the direction of genetic memory, the Ancestors and the healing of all family situations, presided over by Puma; Above, the male energy of the cosmos and our Warrior Spirit; Below, the female energy of the cosmos, the Mother nurturer we all claim as physical children of the Earth; Within, the higher spirit of each of us; and finally Without, the eternal guiding light of the totality of All That Is, mass consciousness and the unconditional love of the Creative Source. Finally, the closing of the prayer wheel.

Once the directional energies have been addressed aloud (the power of the spoken word is the power of manifestation, which is why Don Miguel and many teachers of indigenous backgrounds warn us to be impeccable with our spoken word) and honored, stating affirmation of growth, higher self and partnership in conscious responsible co-creation, the phase of meditation begins. A simple method for achieving this state is to breath from the belly and to concentrate one’s awareness at the point roughly two inches below the navel (the Gravitational Center), focusing vision upon the candle flame within the center of your altar. When sensations and feelings arise in the body, breath into these places, while at the same time shifting your attention to them and keeping awareness of the quality of the feeling without discriminating "negative" or "positive." When thoughts arise, attention can be brought back immediately to the breathing and body awareness. The whole of Entering the Silence is really performed as prayer and meditation.Grandfather Ten Bears taught that the difference between prayer and meditation is: "Prayer is speaking to Spirit. Meditation is being quiet long enough to hear Spirit’s reply."
Maria Yracébûrû

Maria Yracébûrû is a Quero Apache Tlish Diyan 'tsanti--a storyteller, healer, ceremonial facilitator, and teacher of the Snake Clan knowledge and philosophy. As a 'tsant' trained since birth by her grandfather Ten Bears, she is the guardian of ancient and mysterious knowledge that has been passed down through countless generations. A healer and teacher for over 25 years, Maria's articles have been translated into 20 different languages. She lives in San Diego, California.

"In a world of chaos and confusion, she offers tools to help lead a balanced life."

“Maria takes us around the great Wheel of Life in a moving and authentic manner that can only deepen our connections to the Great Mystery and to each other.”

“These meditations are antidotes . . . suitable for all persons seeking to unravel confusion.”

– Venerable Dhyani Ywahoo, author of Voices of Our Ancestors and Chief of the Green Mountain Ani Yunwi

“. . . a prayer we can all join in to heal ourselves and our environment.”

"[This book] is one of the most enlightening insights into life that I have ever been offered. . . . challenges the individual to the highest ideals."

Prayers and Meditations of the Quero Apache