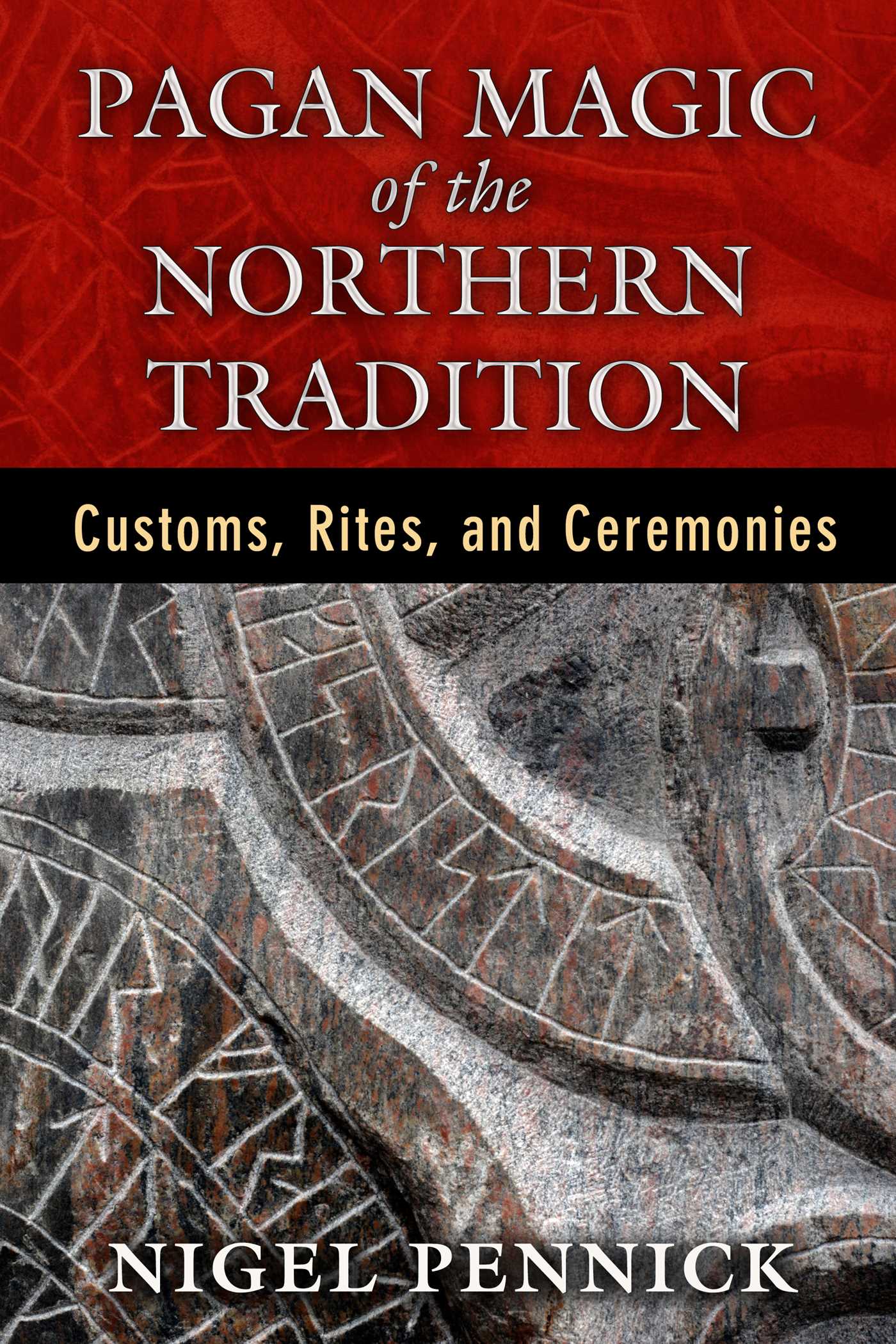 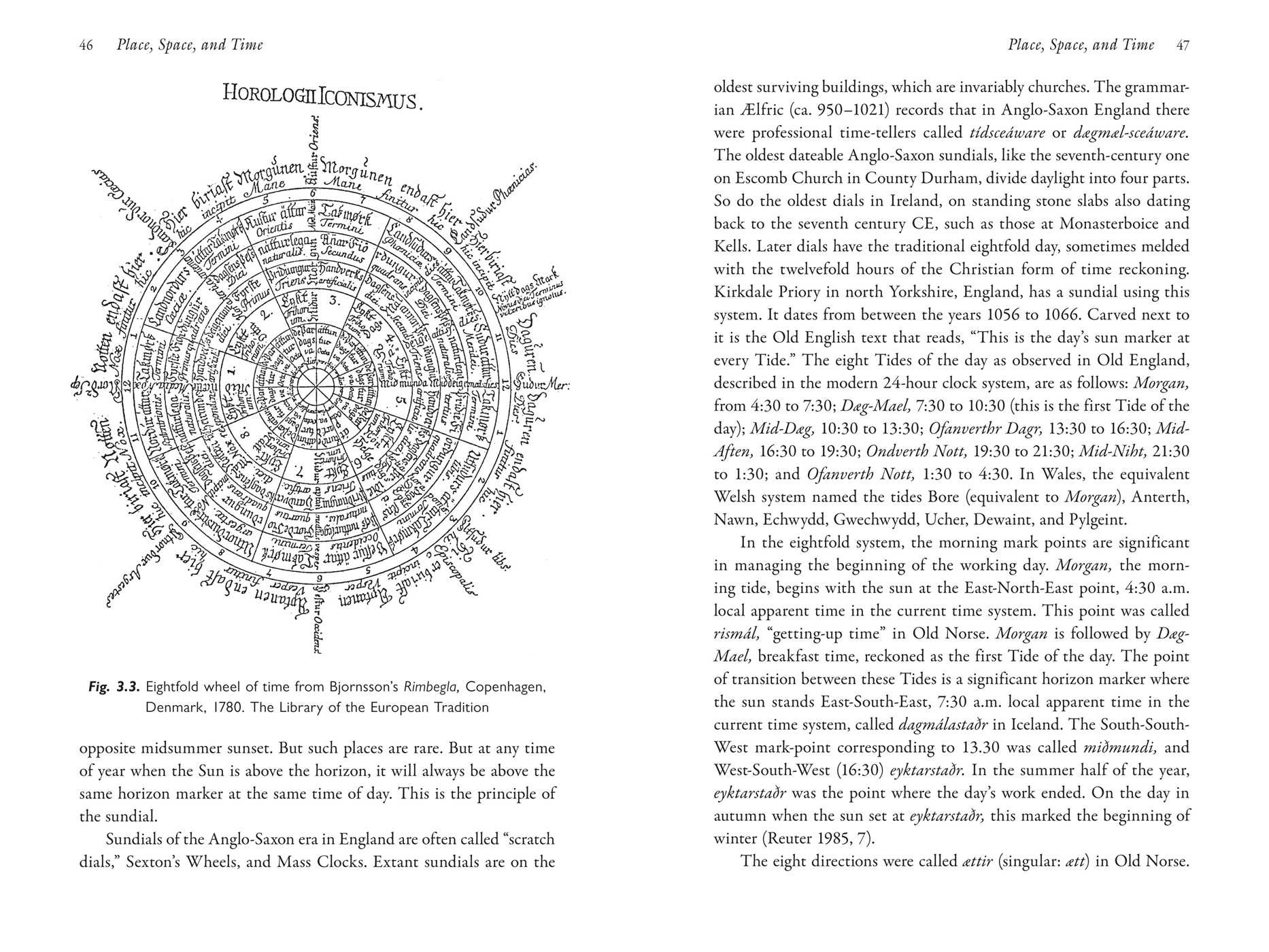 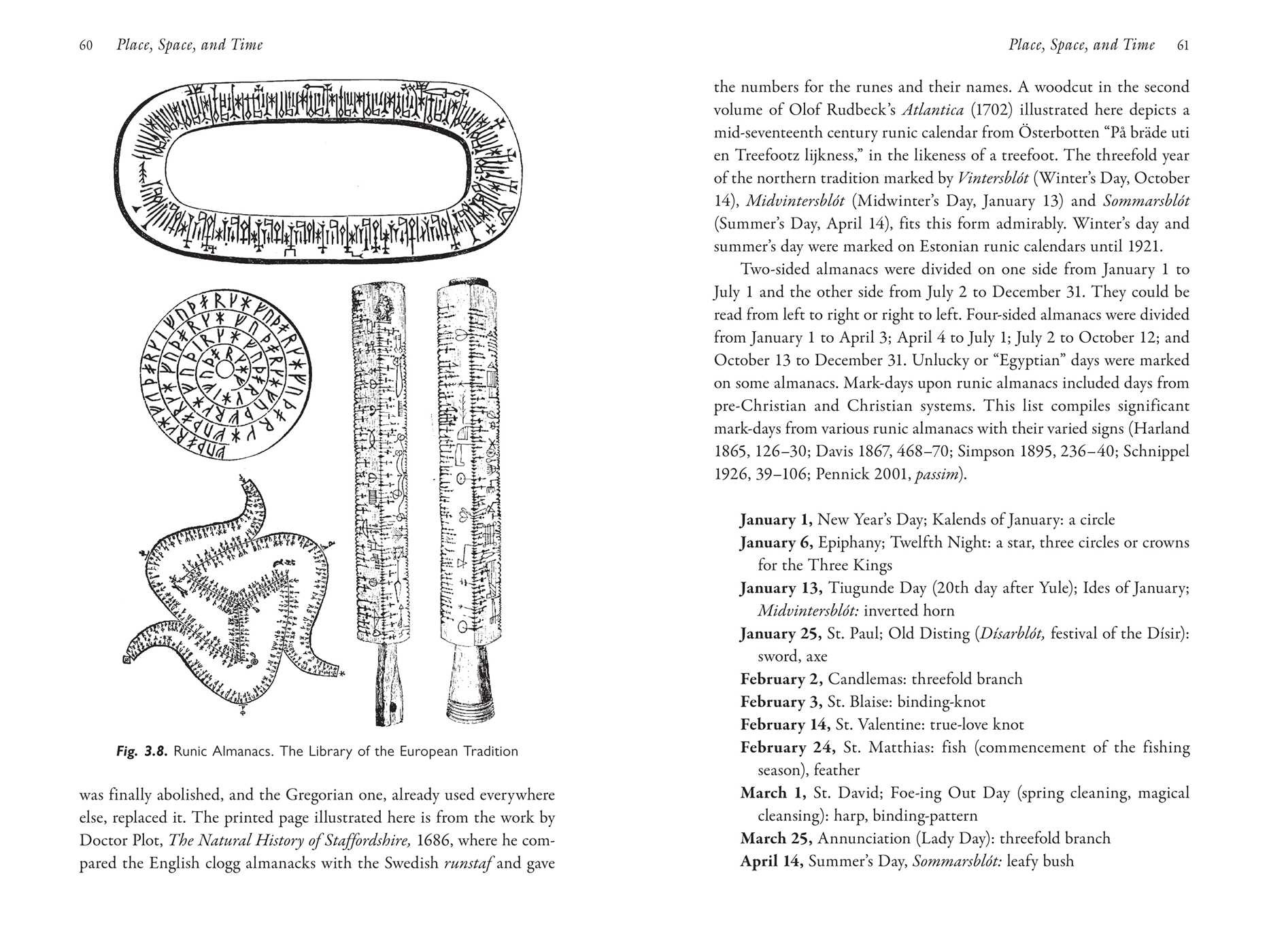 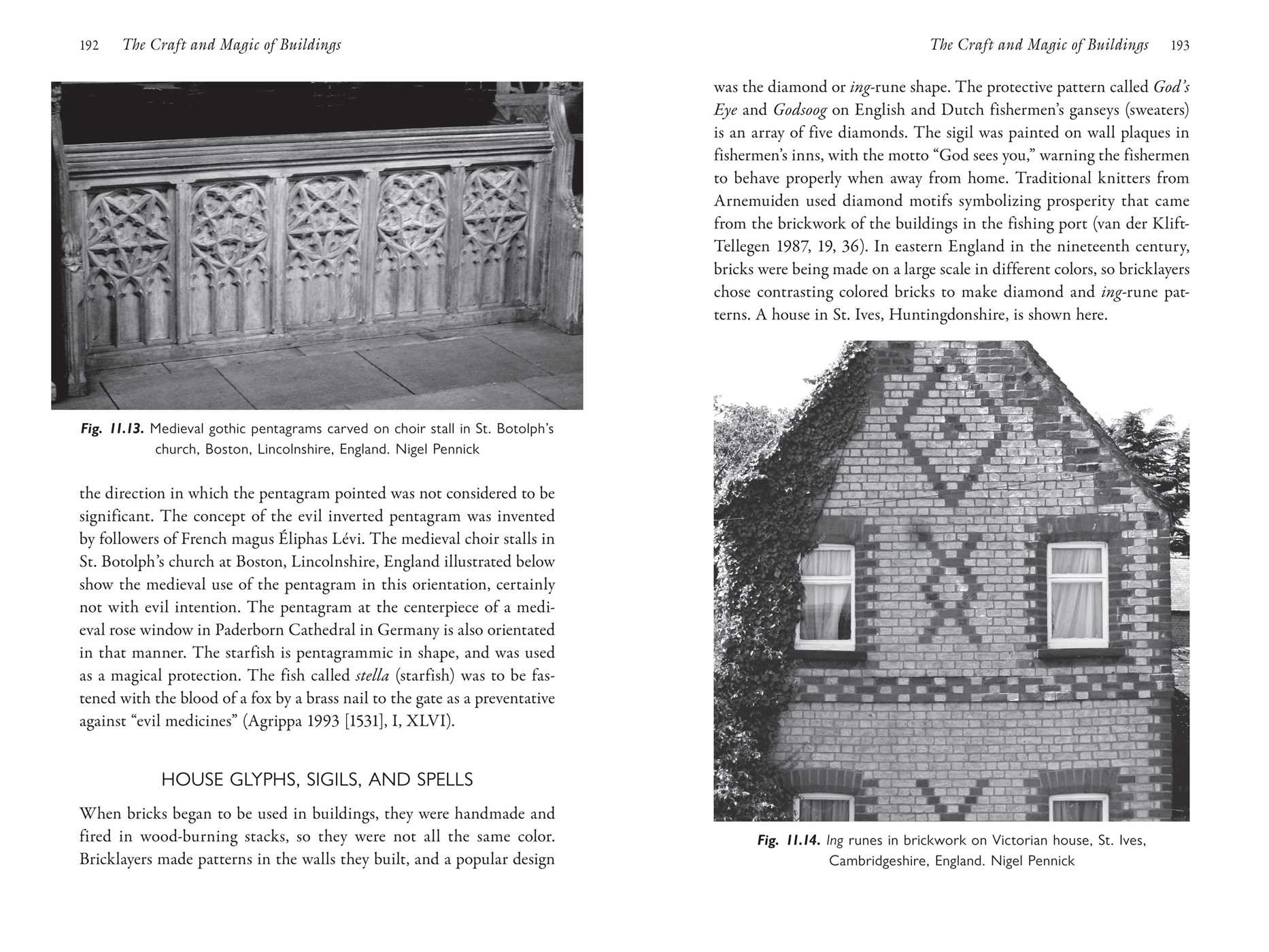 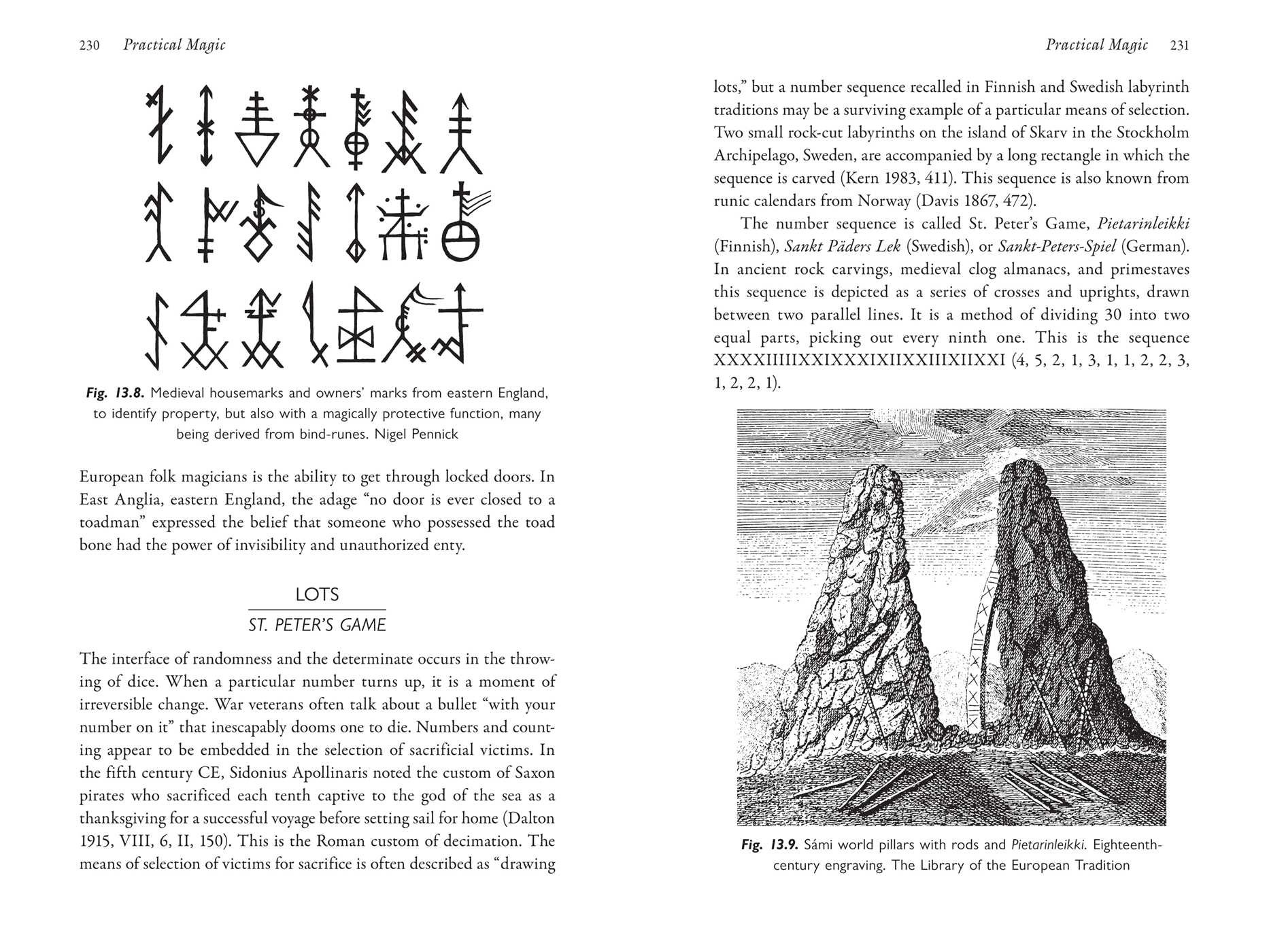 Pagan Magic of the Northern Tradition

A practical guide to the magical history, customs, and practices of pre-Christian Northern Europe

• Details the everyday magic of the Northern Tradition, including household magic, protection spells, and the significance of the days of the week

• Explores direct natural magic, such as shapeshifting and soul travel, and talismanic or sigil magic, including runes and rituals to unlock the power of crafted objects

• Explains how many of these customs continue to the present day

In the pre-Christian societies of Northern Europe, magic was embedded in the practical skills of everyday life. Everything in Nature was ensouled with an inner spirit, as was anything made by hand. People believed in magic because it worked and because it was part of the functionality of their day-to-day lives. Many of these practical observances and customs continue to the present day as rural traditions, folk customs, household magic, and celebrations of the high and holy days of the calendar.

Exploring the magical pagan traditions of the people now called Celtic, Germanic, Scandinavian, Slavonic, and Baltic, Nigel Pennick examines the underlying principle of the Northern Tradition--the concept of Wyrd--and how it empowers the arts of operative magic, such as direct natural magic and talismanic or sigil magic. Through direct natural magic, individuals can shape shift, journey out of the body, or send one of their three souls (fylgia or “fetch”) ahead of them. Sigil magic involves the powers contained in objects, which can be channeled after the appropriate ritual. Runes are the most powerful sigils in the Northern Tradition and were used to ward off illness, danger, hostile magic, and malevolent spirits. Emphasizing the importance of the cycles of Nature to the tradition, Pennick explores the eightfold sun dials and the four ways the solar year is defined. He looks at the days of the week and their symbolic association with different deities as well as why particular acts are performed on certain days and what the customary lucky and unlucky days are. He also examines sacred spaces, household magic, protection spells, and the role of music in the Northern Tradition.

Explaining all the traditional holidays and activities necessary to honor them, Pennick shows how anyone can participate authentically in the magic of the Northern Tradition if they take care to do things properly, with respect, and on the right day.

Chapter 11
The Craft and Magic of Buildings

It is a widespread folk belief that mirrors reflect not only visible light but also intangible spirits and energies. All over Europe are traditions of straight spirit-paths along which, at certain times, travel dangerous inhabitants of the otherworld. Like light, spirits travel in straight lines, and unless something is done to stop them they will enter dwellings whose entrances (windows and doors) are approached by lines-of-sight. To prevent this happening, various techniques are employed by those whose expertise it is to remedy bad places and ward off harm. Mirrors, often in the form of silvered glass balls, are placed at strategic points to reflect the perceived intrusion.

Witch balls are lustrous blown-glass spheres around a foot (304.8 mm) in diameter, usually blue or green but also of silvered clear glass. Their reflective quality comes from silvering the inside glass sphere with a metallic mercury mixture, the traditional way of making mirrors. To prevent evil spirits entering the house, witch balls are hung in a window or in the window above the door in houses without leaded glass.

In recent years, with a renewed interest in Chinese feng-shui, octagonal ba gua geomantic mirrors have in some cases taken the place of witch balls, having the same apotropaic function (e.g., Lip, 1979, 109--13). But mirrors and other reflective devices have one weak point. During thunderstorms they are believed to attract lightning, which was viewed in the past as a material thunderbolt. In Britain wall anchors in the form of an S were believed to ward off lightning from a building. In Normandy houseleeks were planted on the roof ridges of farmhouses for the same purpose. An eastern English way to try to keep lightning away from one’s dwelling is to bury a toad in the middle of the garden, with others at the four corners. This is quincunx magic, covering an area by treating the four corners and the center. Bay trees planted around the garden, the skin of a seal, and eagle feathers are also anti-lightning charms (Jobson 1966, 112).

The pentagram is an ancient apotropaic sign. It is also called “pantacle,” “pentangle,” “pentagramma,” “Solomon’s Seal,” “Drudenfus,” and the “rempham.” It is known from Lombardic and Alamannic sources before the year 700. Medieval and later folk magic gives the pentagram protective power over thresholds. Goethe, in his Faust, makes the demon Mephistopheles gain access to Dr Faustus’s house because the Drudenfuss was drawn inaccurately upon the threshold. A traditional English counting song known as “The Twelve Apostles” tells “Five for the symbol at your door,” which was interpreted by folk-song collectors Broadwood and Maitland as the threshold pentagram (Broadwood & Maitland, 1893, 154-59). The pentagram has an important place in sacred geometry because the fivefold division of the circle is the starting point for the Golden Section ratio. Before the nineteenth century it was not considered significant which way up the pentagram was made. The concept of the evil inverted pentagram was invented by followers of French magus Éliphas Lévi. The medieval choir stalls in St. Botolph’s church at Boston, Lincolnshire, England, show the medieval use of the pentagram in this orientation, certainly not with evil intention. The pentagram at the centerpiece of a medieval rose window in Paderborn Cathedral in Germany is also oriented that way. The starfish is pentagrammic in shape and was used as a magical protection. The fish called “stella” (starfish) was to be fastened with the blood of a fox by a brass nail to the gate as a preventive against “evil medicines” (Agrippa 1533 I, XLVI).

House Glyphs, Sigils, and Spells
When bricks began to be used in buildings, they were handmade and fired in wood-burning stacks, so they were not all the same color. Bricklayers made patterns in the walls they built, and a popular design was the diamond or ing-rune shape. The protective pattern called “God’s Eye” and “Godsoog” on English and Dutch fishermen’s ganseys (sweaters) is an array of five diamonds. The sigil was painted on wall plaques in fishermen’s inns, with the motto “God sees you,” warning the fishermen to behave properly when away from home. Traditional knitters from Arnemuiden used diamond motifs symbolizing prosperity that came from the brickwork of the buildings in the fishing port (van der Klift-Tellegen, 1987, 19, 36). In eastern England in the nineteenth century bricks were being made on a large scale in different colors, so bricklayers chose contrasting colored bricks to make diamond and ing-rune patterns.

On Twelfth Night in German-speaking countries, the Sternsinger go around houses carrying a paper or wooden star on a pole. They sing an Epiphany carol, and then one of them writes in chalk over the door a formula consisting of the initials of the Three Wise Men in the Nativity story--Caspar, Melchior, and Balthasar--with crosses between them and the year on either side; for example, 20 C+M+B 15. This is said to protect the house and its inhabitants until the next Epiphany. Another German tradition is that if one draws crosses on the doors before Walpurgisnacht (May Eve, after sunset on April 30th) the house is protected against witchcraft (Schmidt 1988, I, 93).
Nigel Pennick

Nigel Pennick is an authority on ancient belief systems, traditions, runes, and geomancy and has traveled and lectured extensively in Europe and the United States. He is the author and illustrator of more than 50 books, including The Pagan Book of Days. The founder of the Institute of Geomantic Research and the Library of the European Tradition, he lives near Cambridge, England.

“Nigel Pennick’s Pagan Magic of the Northern Tradition is a treasure trove of ancient folklore of magical rituals and charms for the protection of people and homes, of barns and livestock, of temples and churches, for good luck and healing as well as causing harm when the rituals are not followed. It describes daily ritual activities of the people of these Pagan times and how they experienced the dangers and evil spirits of the world they lived in. Some of the magical rituals were quite bizarre while others may be of value for living in today’s world. Pennick compares the customs and rituals of a wide range of cultures across Europe and beyond, as well as across time, tracing their origins, similarities, and differences. The book is well researched, well organized, and a valuable and impressive resource for understanding the spiritual journeying of our ancestors.”

“Whether we call it magic or folklore (or even superstition), the traditional, often pre-Christian knowledge described in Pagan Magic of the Northern Tradition is fascinating. I’ve been referring to Pennick’s books for years when I need a fact or an example of some interesting early magic to cite in my books and blogs. I learned something new on every page!”

“Magic was a part of everyday life for our Pagan ancestors, a spiritual approach to the environment used by everyone and embedded in all the practical skills of living, from farming and building to music and healing. Nigel Pennick shows us that it is a tradition that still flourishes and rewards us in the modern world.”

“Nigel Pennick’s book offers a well-documented overview of everyday magic, the last recourse against all evils. It introduces us to a strange Pagan world haunted by spirits and supernatural owners of nature and rehabilitates the studies of magic as an important part of our common cultural heritage. Pennick’s book is well worth a read!”

– Claude Lecouteux, professor emeritus at the Sorbonne and author of The Tradition of Household Spirit

Pagan Magic of the Northern Tradition