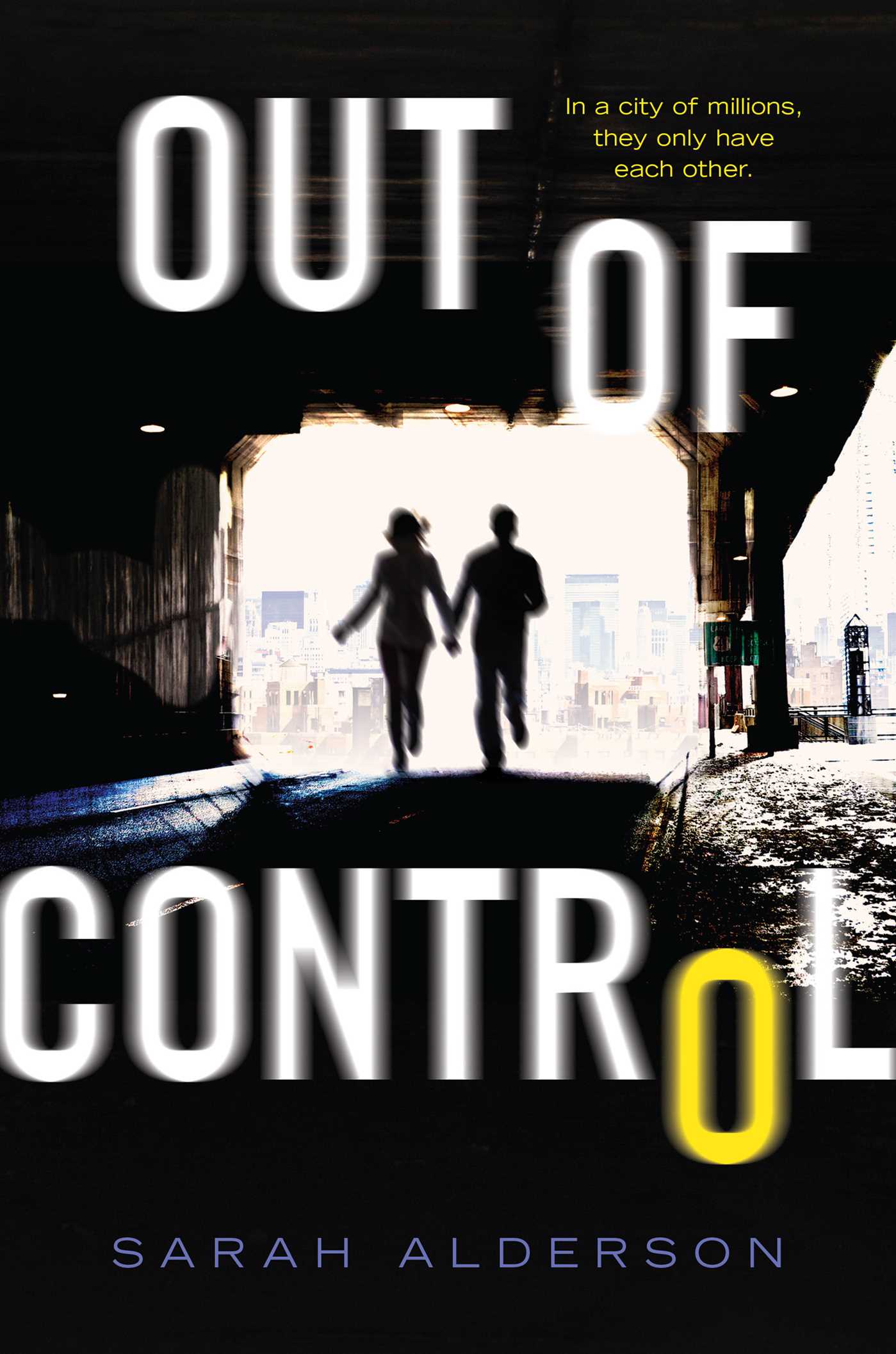 By Sarah Alderson
LIST PRICE $17.99
PRICE MAY VARY BY RETAILER

A girl looking to escape her past in New York City ends up on the run from a dangerous conspiracy in this sizzling, high-stakes novel.

When seventeen-year-old Liva came to New York City, all she wanted was to escape the painful memories of her past and finally find a fresh start. Her hopes for a new future were dashed the moment she became the sole witness to a brutal murder. When she’s taken into police custody—supposedly for her own protection—she realizes something isn’t right, but it’s too late. Soon, bullets start flying, and Liva realizes that she is not just a witness, but the target—and she needs to escape before it’s too late.

With the help of a sexy car thief that she met at the station, Liva manages to get away from the massacre unharmed, but now the two of them are alone in New York, trying to outrun and outwit the two killers who will stop at nothing to find them. Liva and Jay are living on the edge, but when you’re on the edge, there’s a long way to fall.

The policeman is looking at me, his head tilted to one side, a deep line etched between his eyebrows. He taps his pen in a slow staccato rhythm on the edge of the desk. “What were you doing on the roof ?” he asks.

I take a breath and try to unknot my cramping fingers, which are stuffed in the front pocket of the NYPD sweater I’m wearing. “I was just getting some air,” I say. I sound like an automaton; my voice is toneless, lost. “I couldn’t sleep.”

The policeman’s eyebrows rise. He scribbles something on his pad, then glances up, catching sight of someone or something behind me. He stands quickly, tossing his pen onto the paper-strewn desk. “I’m going to get a coffee,” he says, grabbing a mug from among the mess. “Can I get you anything?”

I shake my head and watch him walk away, scratching the back of his neck. He stops on the other side of the room to talk to another detective, wearing a jacket emblazoned with the word FORENSICS. They glance over at me as they talk. I turn away and stare at the wall. I know what they’re saying. They’re saying that I’m a lucky girl. That the fact that I’m alive is “a miracle.”

But if this is a miracle, then I don’t think I want to know what kind of god these people believe in. A shadow falls over me. I jerk around. The other detective, the one in the forensics jacket, stands in front of me. My eyes fall to the heavy-looking gun in the holster attached to his hip. I recognize it. It’s a Glock 19.

“Hi, Olivia, I’m Detective Owens. Do you mind?” he asks, indicating the empty chair beside me.

I shake my head and he pulls out the seat and sits down heavily, as though the weight of a thousand dead bodies is piled on his shoulders. His shirt is as heavily creased as his face. He rubs a hand over his eyes. He has saggy gray bags under them but, now he’s closer, I can see he’s not as old as I first thought: maybe thirty-five, with dark brown hair and a day’s worth of stubble.

“So, what I’d like for you to do,” he says in a heavy Brooklyn accent, “is to walk me through what happened this evening.”

I grit my teeth. I’ve already done this. I’ve been through it three times; once with the cop who answered the emergency call, and twice here at the station.

“Just one more time,” Detective Owens says apologetically, trying for a smile. “I know you’re tired, I know you’ve been through a lot, but we really need your help, Olivia. You’re the only witness. If there’s anything you remember—even if it seems like something trivial, we need to hear it. It might be the clue that helps us find the people who did this.” He pauses. “Because, if I can be honest with you, there’s not a whole lot to go on right now.”

“Can you be any more precise?”

I squeeze my eyes shut, trying to picture the room. There was a clock on the bedside table. I glanced at it when I turned the light out. It was just after midnight. I tossed and turned for at least an hour before I decided to give up on sleep, but I didn’t check the exact time.

I shake my head at the detective.

“Why’d you get up? Did you hear something? A noise in the house? Did something spook you?”

“No,” I say, still shaking my head. “I’ve not been sleeping very well. I have jet lag.”

I don’t answer. I just fix him with a stare. He holds my gaze for a second and then looks away, down at the notebook cradled in his palm.

“So you get up. Then what?” the detective asks.

I cross to the window. It’s sweltering hot, the night air torpid and thick as a quilt, threatening to storm. I’m wearing only a pair of pajama shorts and a thin camisole top—the same things I’m still wearing now beneath the oversized sweater they gave me at the police station. The house seems to be breathing. There’s a clock ticking downstairs by the front door, the hum of an air conditioner, the ticking tink of the plumbing, and the occasional sound of a car sweeping past on the street in front. Away in the distance a car alarm wails. My third-floor bedroom faces the back garden, a thin band of manicured green, walls stretching high on either side, trees blocking the view of neighboring brownstones. Beneath my window is a jutting ledge, just wide enough for a foothold.

I don’t think twice before I’m crouched in the window frame, my hands gripping the wooden sill, my bare feet slipping through and finding purchase on the crumbling brickwork. I take a deep breath, flattening my palms against the walls, feeling the familiar tightening in my belly, the rush that feels like stars shooting through my veins. I don’t look down at the ground four stories below. I look up, at the moon, a dishwater-dirty half circle shrouded behind a cloud, and feel every cell in my body spark to life.

“Keep going,” Detective Owens says. “What happens next?” he asks.

I edge slowly along the windowsill, carefully, toward a drainpipe screwed into the wall. When I reach it, I grasp it in both hands and then start shimmying up it, using the brackets as footholds. It’s not as high as some I’ve climbed—maybe ten feet before I reach the roof and scramble onto it, breathless, my legs trembling slightly. I stand, wiping off the dust and dirt from my hands on my shorts and then I balance on the very lip of the roof, my toes disappearing over the edge, feeling the first patter of rain dance on my bare arms. I stare at the tops of trees ink-stamped across the sky, at the water-stained clouds, and the thought whispers through my mind that I’m insane, that if I fell from this height I’d die for sure . . . but then the thought is swept away by a wave of pure adrenaline. I feel light as air, perfectly poised. There’s no way I could ever fall.

And then I hear the tinkle of glass breaking somewhere far below.

My arms whirl frantically as I fight to keep my balance. I tumble backward onto the roof and crouch down low, my hands white-knuckled as they grip the ledge. I squeeze my eyes shut and tell myself angrily that it’s just breaking glass, that I’m stupid and just overreacting, and I’m forcing myself to my feet ready to go and investigate when a thud comes from somewhere deep inside the house.

My stomach folds tight, all my instincts, everything I’ve ever learned from my father and from Felix coming into play: Steady your breathing, don’t succumb to panic, consider your options.

Maybe, I think to myself, Mrs. Goldman woke in the night and spilled a glass of water. Maybe one of them has fallen out of bed. They’re old. It’s possible. I’m jumping to conclusions that it’s something bad. I’m in New York, for God’s sake. It’s safe here. Safer, at any rate. I throw a leg over the ledge and reach for the drainpipe, readying myself to shimmy down so I can go and investigate, and just then I hear two muffled retorts. I freeze. I know that sound. I hear it in my dreams. I force my leg back over the wall and I cower behind the ledge up on the roof, wrapping my hands around my head, blocking my ears and shutting out the sounds that follow, until, what feels like hours later, a police siren shatters the night air. 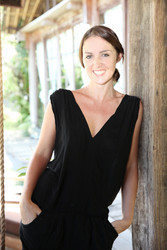 Having spent most of her life in London, Sarah Alderson quit her job in the nonprofit sector in 2009 and took off on a round the world trip with her husband and princess-obsessed daughter. After several months in India, Singapore, Australia and the US, they settled in Bali, where Sarah now spends her days writing by the pool and trying to machete open coconuts without severing a limb. She is the author of The Sound; Hunting Lila and its sequel, Losing Lila; and the paranormal trilogy Fated, Severed, and Shadowed.

"The opening of the book has to be one of the best that I've ever read... Explosive, action packed, tense and exciting. A five star read which I will definitely be recommending.”

"Phenomenally well-written like all Sarah Alderson’s books, the sexual tension crackles off the page.... it will leave you begging for more."

"A highly addictive read that will have readers everywhere on the edge of their seats.”

“Super sexy, serious and mysterious all in one - total must-read.”

“I love Sarah Alderson's books and this one is an absolute page turner! It's got everything you could want! Action, thrills, romance and humour all in one!”

“Beautiful and sensual with frissons of sexual tension and a punchy and serious storyline.”

“Alderson weaves a tale so clever and full of suspense it’s almost magical. The twist and turns are timed to perfection, and you just won’t see them coming. Both the plot and pacing of Out of Control are cinematic; Alderson captures the sights, smells and sounds of NYC beautifully.”

By Sarah Alderson
LIST PRICE $17.99
PRICE MAY VARY BY RETAILER