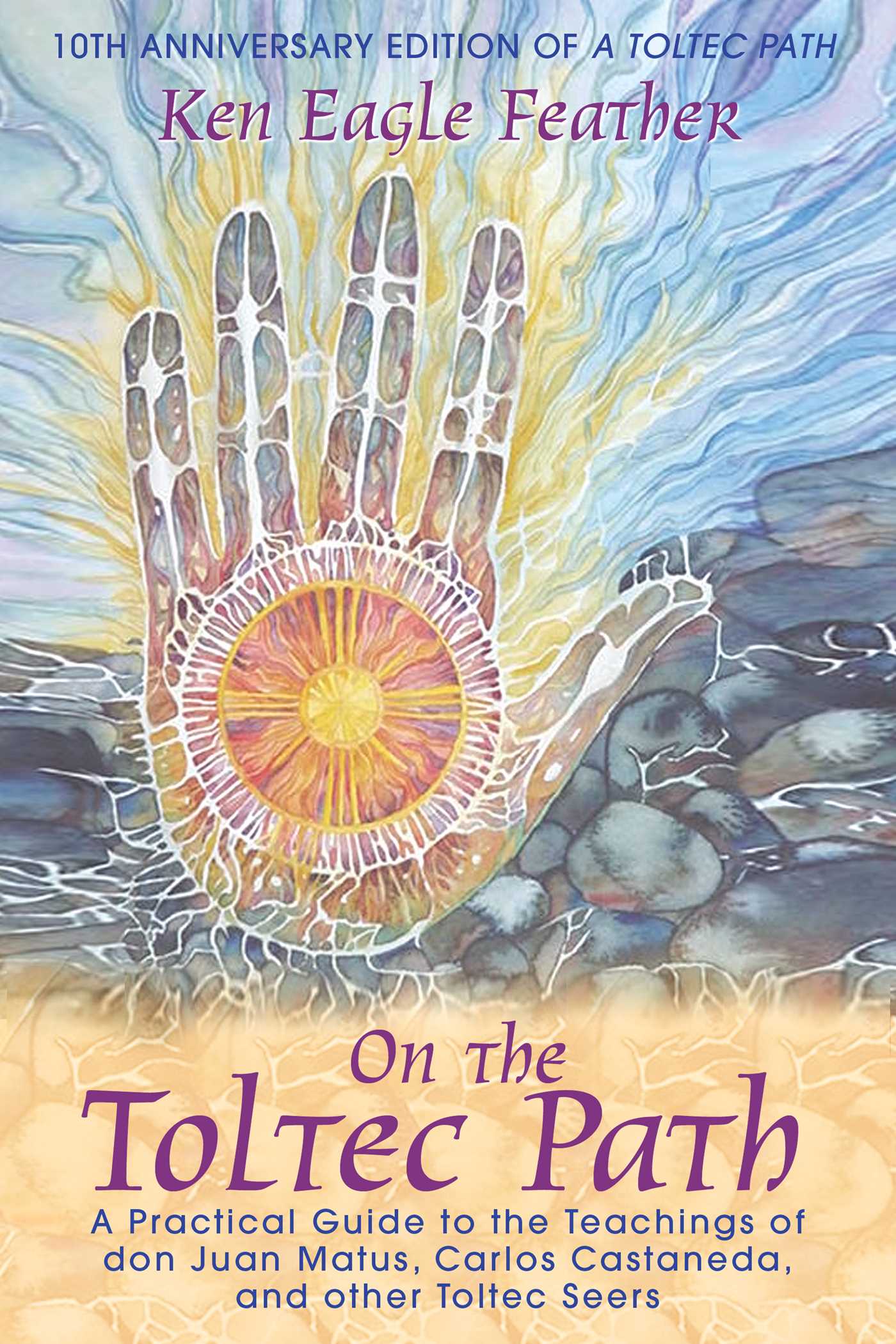 An exploration of the teachings made popular by Carlos Castaneda

• Includes a new preface for this 10th anniversary edition

On the Toltec Path is an overview of the theory, discipline, and practice of the Toltec Way, a philosophy and heightened way of perceiving the world taught by the Indian seer don Juan Matus. As a philosophy, it is a method of inquiry using the Toltec three Rs: re-examination, re-interpretation, and re-formulation. As a way of perceiving the world, it offers sophisticated processes of managing perception through dreaming, visions, and learning to see the world as both ordinary and non-ordinary reality. By contrasting and balancing these two realities we are able to stand apart from both and pick and choose the best each has to offer. Learning how to become a true seer enables us to realize the purpose and meaning of our life.

The works of Carlos Castaneda have long been among the best-known introductions for those who wish to study the Toltec Way. However, many who want to learn the practical and technical aspects of this path have found it difficult to discern the details of the techniques buried in Castaneda’s narrative. In this book Ken Eagle Feather provides a complete and accessible explanation of all the technical aspects of the Toltec spiritual and mystical practices. He offers a thorough exploration of Castaneda’s works and a verification of don Juan Matus’s teachings through his own 30 years of personal experiences and observations of the Toltec Way. On the Toltec Path serves as a practical guide to the Toltec Way and offers a valuable complement to the narrative works of Castaneda and other Toltec authors.

To understand a Toltec path, it’s best to know that it does not stem from a world of ideas, but from a world of intent. It does not deal with a world that is formulated and bound by reason; it does reflect a world that hinges on will. Its practices yield only to the domain of silent knowledge, which don Juan simultaneously defines as intent, Spirit, or the abstract, and thus descriptions always seem inadequate (Silence, 167).

Don Juan thinks that in the course of human evolution, our ancestors became too fixated on trying to know intent objectively, as though it could be studied as something separate from human awareness. The more they tried, the more elusive it became. He says that the average person’s intent is practically dead. Realizing that they begin with a nonfunctional intent, Toltecs begin awakening it by performing a single action that is “deliberate, precise, and sustained.” Repeating the act long enough produces unbending intent (Fire, 179).

Accessing intent occurs in heightened awareness (Silence, 104). And proficiency with tracking and dreaming leads to heightened awareness. Thus a good way to start your awakening is to practice a variety of exercises. Then allow intent to lead you in the proper directions. Keep in mind that you’re going deeper and deeper in awareness. The understandings you have today often fade as you round the next bend. Also stay alert for the glimmerings of something waiting to unfold. The further you travel, the more you’re going to sense something looming, something waiting to break into full awareness. This is the unknown ready to become known.

By latching on to an intent, you bring that intent into view. Often this is termed “manifesting,” or bringing something--an idea, a goal, an object--into conscious awareness. From a Toltec perspective, manifesting concerns aligning your energy with the energy of the goal. This alignment produces the perception of it. In all phases of energy alignment, intent is the key.

Manifesting is a moment-to-moment process. In each moment we balance between the known and unknown. Ordinarily, this relation is so flimsy that we perceive new potentials only if they fit with our current, known world. And so we automatically reduce most potential. For this reason, an unyielding purpose is necessary to shift the focal point outside of its comfort zone. That is, only with such purpose can you deliberately step beyond your normal thoughts and habits that keep the focal point in place in order to arrive at new, transformative perceptions.

Don Juan says that intent is available to everyone, but its command belongs only to those who explore it (Silence, 105). Accordingly, the following views are offered to help you scout and track aspects of intent. Each of these is applicable to manifesting anything, but the bias concerns manifesting deeper connections with Spirit. Success requires giving Spirit complete control of your life without losing control of yourself.

We all face numerous influences, which govern how and what we manifest. Here are a few.

Decisions
When people make decisions, says don Juan, they merely acquiesce to a far greater power. Decisions are therefore a matter of allowing the first energy field to adjust to what’s already occurring in the second field (Tales, 243). In other terms, as awareness filters through into conscious awareness, you make a choice that echoes an Eagle’s command. To surrender the illusion of personal decision-making takes quite an effort. But with sufficient time exploring the world of Spirit, you realize that personal control doesn’t amount to much. You find that all of your gains reflect how well you have merged with the directives of Spirit. This might be why don Juan considers Spirit to be the real player and himself as only its agent (Dreaming, 200-205).

Learning to give yourself to Spirit is not done in a helter-skelter fashion. One bit of advice is that you make your decisions so carefully that you’re not surprised by what unfolds (Tales, 155). Another is that by applying personal responsibility, you make decisions that leave no time for regrets and that are always strategically the best (Separate, 184).

A decision unleashes energy. If you want to shift cohesion and make a new alignment, you need to apply steady, even pressure. When you can maintain strong, well-directed pressure, you have created unbending intent. As you learn to acquiesce to Spirit and remove personal wishes from decision-making, manifesting occurs as a result of becoming more aware. At the ranger stage, this means you build your life one day at a time. And to do this, you must trust your personal power.

Focus
Like a water-filled balloon placed in the ocean, you are one with, yet separate from, your world. How and where you direct your energies determines where you travel and what you experience. Manifesting, then, is basically a matter of focusing energy. Typically, however, we’re unaware of many of the influences affecting our focus. We all have habits and attitudes whose full effects we don’t realize or of which we aren’t even aware. To remedy this, self-observation is essential. Throughout the day, notice what draws your attention and where you aim your energy. Remember that how and where you place your energy determines what you experience. Ask yourself if what you’re doing is what you really want.

Furthermore, having a purpose focuses energy along specific avenues. The more intense the purpose, the greater the movement of energy. Accordingly, focus on the energy of your purpose from within your body. Sense it, guide it, live it. Hence, the primary focus is on gaining more awareness. When you can perceive the world without the artificial barrier of self-importance, and do so while maintaining the integrity of your personal energies, you’ve manifested a natural field. The balloon in the water ceases to exist, so to speak, but the energy within the balloon retains its own integrity and so a sense of individuality remains.
Ken Eagle Feather

"I find the book very useful and written with good insight. It's with pleasure recommended both for those fascinated by Castenada as well as those trying to find a focus in their life or spiritual journey."

"This 10th Anniversary Edition is a welcome item for those interested in Shamanism, and the writings of Carlos Castaneda, among others. The book remains a major overview of the theory, discipline, and practice of the Toltec Way. . . . Clearly written, this is the type of book that will go far in helping those truly interested in the Toltec Way."

"By the end of this book, you will know whether you want to walk this path completely, or take what was right for you, and leave the rest behind. Whatever you do, you will have grown as a person."