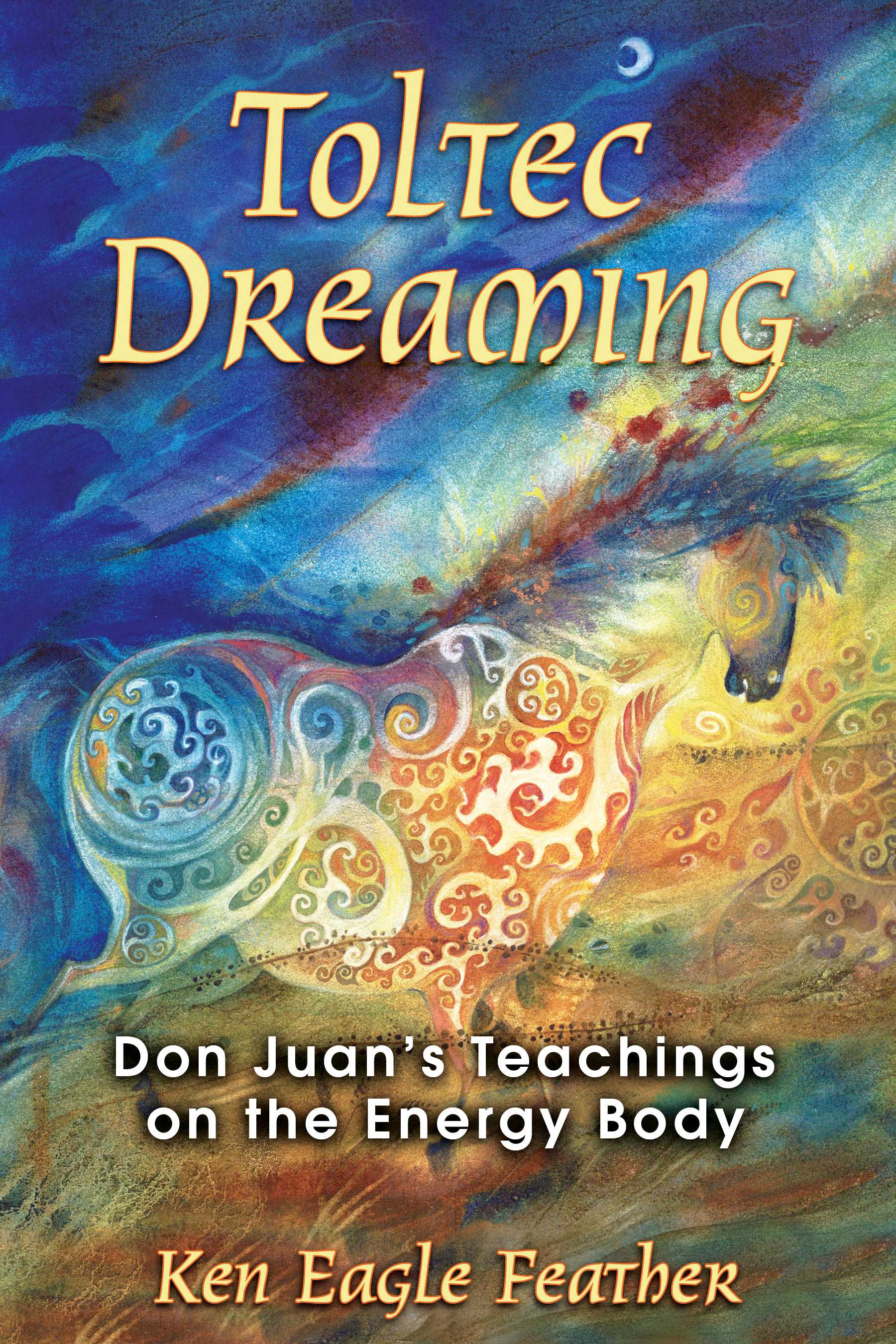 • Describes the energy body, its modes of perception, and how it produces dreaming

Toltec Dreaming explores the many aspects and levels of the dream-state, distinguishing ordinary dreaming from “dreaming awake,” a condition of heightened awareness through which the active dreamer ascends to the Dream of Transcendence. In this book, Ken Eagle Feather presents the history of dreaming’s place within the Toltec tradition and provides a practical how-to manual for achieving and maximizing dreaming potential.

The Toltec Way superimposes on the waking world the subtle physics of the dream world in order to create a conscious dreaming body, often referred to as an “out-of-body experience,” that can allow anyone to use dreaming as a vehicle to higher consciousness. Once the dreaming energies are fully awakened, unbounded conscious perception can come alive, whether one is in the world of dreams or in daily life. The author shows how to communicate while in the dreaming body and indicates what one may encounter in the dream. He also identifies barriers to dreaming and includes instructions for detaching the dream body from the waking ego. Filled with techniques that stimulate dreaming and the development of the dreaming body, this book will guide practitioners along the Toltec Way of the Dream.

While researching a magazine article on out-of-body experience (OBE), I discovered the Monroe Institute, founded by Robert Monroe, author of a classic book on OBE, Journeys Out of the Body. My initiation into the institute’s work was by attending a six-day, in-residence seminar. During it, I fell head-long into an unexpected journey that later included time in the institute’s dream-research laboratory. Before embarking on my work at the dream-research laboratory, however, I was given an unexpected gift of three sessions in a flotation tank.

Floating has gained popularity as a result of its many benefits, including relaxation, enhanced problem solving, and the general exploration of consciousness. Once called a “sensory deprivation chamber,” the flotation tank was invented by John Lilly, M.D., who pioneered communication with dolphins.

The proprietor of the float tank explained that I would be alone in a completely dark environment, suspended in water saturated with several hundred pounds of Epsom salts. The salts provided buoyancy that would keep me floating on the surface of the skin-temperature water. For each session, I undressed, showered, and then crawled through a small hatch, pulling it closed behind me, shutting out all light. I slipped into silky, sensuous water. I laid back, delighting in the odd sensation of effortlessly floating.

For the first session, I had two things on my mind before entering the tank. In other words, my intent was already loaded. First, the storyline in the movie Altered States--based loosely on John Lilly’s explorations--where part of the plot consists of him changing his physical form into a prehistoric humanoid. I wanted to know how easy such a transmutation might be within this technological dream environment. Second, I wanted to see if I could separate my physical and nonphysical consciousness and have a dreaming body experience (DBE).

Shortly into the session, I lost all physical sensations. I then gained the subjective awareness of being a five-foot lizard emerging from water onto a shoreline. Through the lizard’s eyes, I saw a tropical beach lined with palm trees. I felt bombarded with data about the evolution of consciousness symbolized by man as one focus of perception within all consciousness. The information was coming so fast I could hardly catch any of it. I also felt exceedingly aware of my lizard body and the environment. I soon realized a profound respect for the native intelligence and awareness of lizards. Never before had I instinctively sensed the environment with such clarity. As a lizard, I crawled out of the water a little more and then returned to the awareness of my physical body as I tried to analyze the experience.

Prior to this, during a few spontaneous DBEs, I had experienced shifts in perception from my human body to that of animals, not an uncommon dreaming experience for many people. This shift into lizardness, as it were, occurred with far less effort and with far greater control. The forty-five minute session ended just as I began thinking about out-of-body travel.

Throughout these experiences, don Juan’s teaching remained a significant influence. Much of his instruction stemmed from an ancient lineage for the development of consciousness; a system developed by Toltecs. The Toltec Way combines techniques and exercises with perspectives and theory to take awareness beyond ordinary perception. The practitioner learns how to achieve balance in everyday life, how to generate personal and professional interests that last a lifetime, how to access different modes of perception such as DBEs, and most important, how to leave the theory and technique behind en route toward an even greater freedom. Don Juan’s overriding concern was to enable his apprentices to transcend dogma in order to live full, complete lives.

Often a natural part of growth is becoming aware of other dimensions, learning to perceive that which is there already. Edgar Cayce, Robert Monroe, and don Juan all maintain that we regularly have other-than-physical body experiences during sleep. So as we develop awareness, we notice more of what we’re already up to--including dreaming. This means that the essential method of developing dream states is developing awareness. With its versatile applications, practicing dreaming then becomes a tool to further develop awareness.

Ordinary dreaming has never captured my interest but DBEs have. En route to DBEs, however, my interest in dreams widened as I discovered a progression of levels and capacities. Ordinary dreams became vivid, full of color and life. Achieving a degree of comfort with these, I began to have instructional dreams where the dream clearly imparted some kind of knowledge. Stabilizing these dreams, I would enter a lucid dream. Stabilizing lucid dreams, DBEs occurred. With time and practice, the DBEs developed into occasional bilocations where I would be awake in two environments simultaneously.

Before tapping the vivid-dream stage, though, I first had to remember my dreams. Before this, I had to be aware of falling asleep. I realized sleep entails “falling off,” and the work now involved maintaining awareness. I would lie on my back and gaze at the middle of my forehead with my eyes closed. I programmed myself, as it were, with the suggestion to “enter your dreams to have a DBE.” This led to pre-sleep experiences of seeing sparkles of light in deep darkness, sinking feelings, and an infusion of energy. It turns out that when I maintained an emotionally balanced, flowing life, the frequency and intensity of dreaming increased.

This growth did not reflect a definite step-by-step process, where DBEs always followed lucid dreams, which always followed vague dreams. I might have a DBE one night and a vague dream the next night. For this reason, the information in this book is not chronological; rather it is presented by topic in order to provide a better sense of what dreaming offers both from a practical and an adventurous standpoint. In looking at varieties of ordinary and nonordinary dreaming, we’ll also touch on applying nonordinary dreaming to waking consciousness. Dreaming, after all, is the skill of engaging awareness head on.
Ken Eagle Feather

“By the end of this book, you know whether you want to walk this path completely, or take what was right for you, and leave the rest behind. Whatever you do, you will have grown as a person.”

“I have known and worked with Ken Eagle Feather for well over a decade, and he is one of those all-too-rare writers who actually--hour to hour, day by day--lives what he teaches. As a result, this book emanates a power and an authenticity that makes it a most potent, vital, and inspiring work. You are in very good hands.”

– Simon Buxton, author of The Shamanic Way of the Bee

“The next frontier is human consciousness, and through his explorations into non-ordinary reality, Ken Eagle Feather shows us how we can begin to transcend the ‘habits of mind’ that have come to dominate--and limit--our perception of ourselves and our world. What an exciting opportunity for us all.”

– Hillary S. Webb, author of Exploring Shamanism and Traveling between the Worlds

"Toltec Dreaming is clearly one of the more interesting books on the subject available today. We recommend the book highly."

"The author does a nice job of explaining the Toltec path and philosophy, but explains the information in a manner that can also be used in the reader's everyday life. The book has some really good exercises and information for anyone, not just those interested in exploring specifically the Toltec teachings."