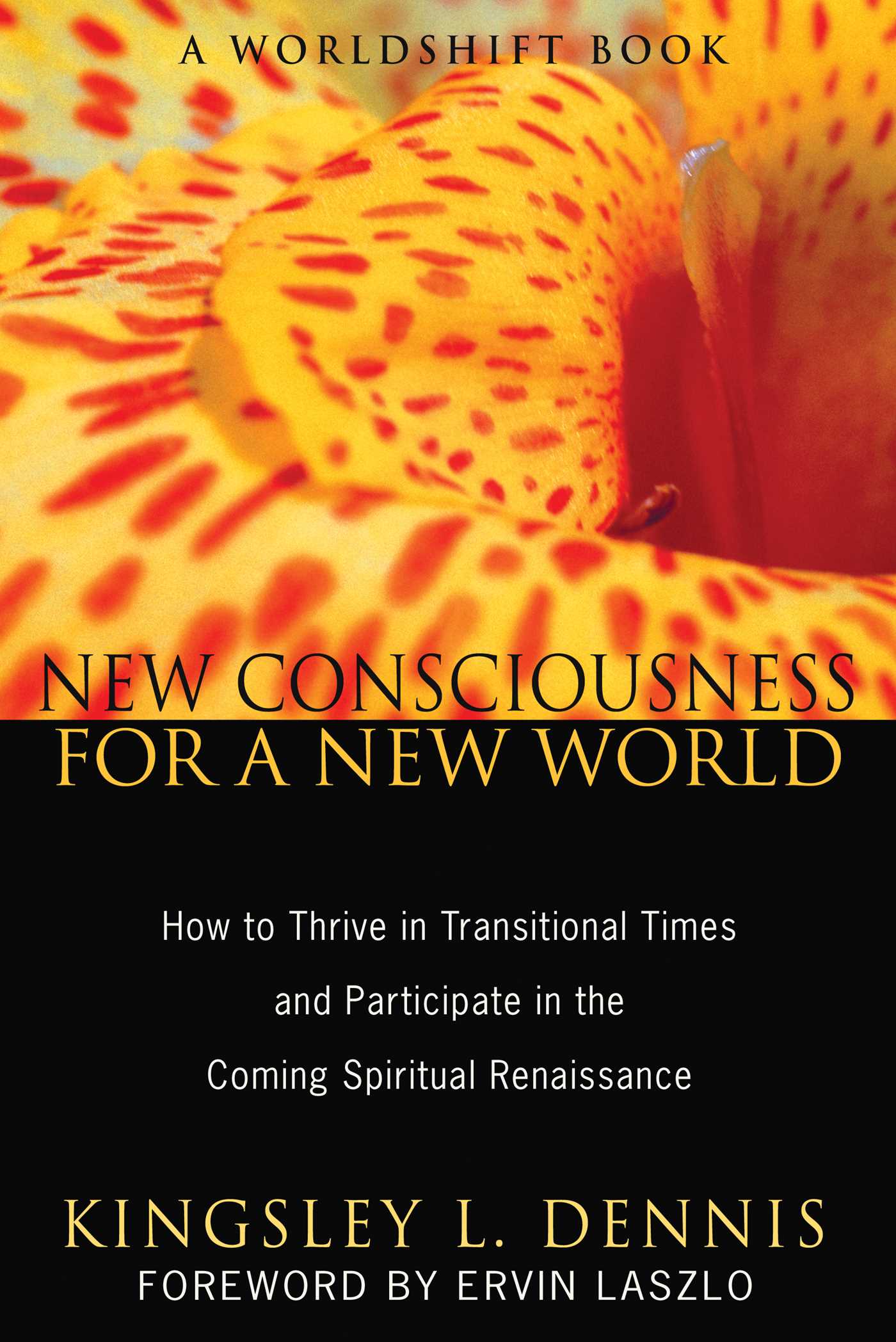 For centuries, indigenous wisdom traditions have talked of an epochal shift on the horizon, of a spiritual renaissance for the earth and her living family. Now the timelines are converging and the potential for an energetic “upgrade” for humanity is here, but first we must survive and evolve through the current period of transition.

Explaining that evolution is not a gradual process but more like a “shock to the system”--radical waves of transformation after a period of dormancy--author Kingsley Dennis reveals that we are currently undergoing an evolutionary leap and shows not only how to survive but also thrive in this period of global upheaval and change. Examining the nature of evolutionary cycles, he explains that the instability we are now experiencing--climate change, economic meltdowns, and increasing political polarization--is the convergence of complex systems that have reached a critical state. What we need in order to push through to the coming spiritual renaissance is a paradigm shift in human thinking and perception, a conscious evolution in recognition of the interconnectedness of all things--a new mind for a new world. Examining new findings in quantum physics and quantum biology on the interconnectivity of all life as well as opportunities for us to reawaken our slumbering souls, this book offers a glimpse of the new global society to come, a renewed humanity for the 21st century, and how each of us can best participate during the process of planetary transformation.

A New Mind for a New World

We all share a common psychological environment that many of us, most of the time, take for granted. We have underestimated the impact of human thought worldwide, neglecting to consider the power of destructive thought and “mental pollution” upon a sensitive and responsive biosphere. Within an integral world, everything counts. How we are taught to think will affect how our species manages cultural development and its subsequent intervention into Earth’s living systems.

For the most part humanity unknowingly participates within a cultural hypnosis. From early childhood our experiences are established to conform to our specific cultural norm; any “anomalies” are usually corrected and then reinforced through various socializing processes such as family, school, friends, and so forth. Thus our world is often given to us through the medium of particular cultural filters, and so each of us is literally hypnotized from infancy to perceive the world as the way people in our culture perceive it. To break from this indoctrinated perceptual environment is extremely difficult and often beset with many personal problems arising from peer pressure and friendship-family ties. A “shock” is often necessary to catalyze one’s own change of mind. Experiences such as a near-death experience (NDE) are often cited as an example of an event that radically changes people’s life views. What we may be experiencing on a collective level through our planetary evolutionary transition is a species near-death experience. If this doesn’t shock us awake then we may as well sleep forever.

For a new mind to emerge during the times ahead it will be necessary for people to take power back into their own perceptual mechanisms, to empower themselves by withholding legitimacy toward old and outdated modes of thinking. As social philosopher Willis Harman describes, “by deliberately changing their internal images of reality, people can change the world.” This change then requires us to take back our rightful legitimacy unto ourselves; to decide carefully on what we think, how we think, and which beliefs we choose to adapt.

Many of us are unsuspecting of the degree of insecurity that governs our perceptive abilities. We focus on the immediate and seemingly ignore the long-term despite the long-term having the greater urgency in scale. Our social institutions and media continue to reinforce the immediate and short-term, thus strengthening our social myopia. As a telling example a recently published report in the United Kingdom titled Beyond Terror: The Truth About the Real Threats to Our World focused on the disproportionate attention given to terrorism in the “short-term” compared to the threats that although resulting in more fatalities were classed as ongoing “long-term” problems. The report stated that in 2001 in the United States alone the following number of Americans was killed from various causes:

International terrorism, however, had a figure of around 2,500. This shows our “old mind” at work, how it perceives and prioritizes events. It is also a mind that goes very far back into our species evolution, a mind that evolved to deal with a very different world. Our early history equipped us to live in relatively stable environments within small communities; challenges were short-term and nearby. The human mind thus evolved to deal with slow-impact, short-term changes. The world that made our mind is now gone, and the world we have created around us is a new world; paradoxically, it is a world that we have developed limited capacity to comprehend. It is fair to say that we now have a mismatch between the human mind we possess and the world we inhabit today. Most of the momentous changes in our cultural history have taken less than one hundred years. Cultural evolution has worked more or less well until the present century; now it finds itself hampered by an outdated human perceptual system. Contemporary society still relies too heavily--and unconsciously--upon ancient modes of thought and ancient styles of thinking.

Let’s be clear about this; we have arrived late to the evolutionary party. In a now well-known analogy that places the evolution of Earth within a single year calendar--from January 1st to December 31st--with each day of the year equal to twelve million years, then the first form of life, a simple bacterium, arose sometime in February. More complex life-forms arrived throughout spring and summer, and fishes came to the party around late November 20th. Then the bouncers--the dinosaurs--finally arrived around December 10th, only to disappear drunk on Christmas Day. It wasn’t until the afternoon of December 31st that the first of our recognizable human ancestors showed up (typically late!). So when did we--Homo sapiens sapiens--crash the party? Well, we knocked on the door around 11:45 p.m., which makes all recorded history taking place within the final minute of the year. We are, in all respects, a rapid evolutionary phenomenon. And it’s going to get a whole lot more rapid. This means we need to ditch the “old mind” as fast as possible before we take too many wrong decisions or succumb to mounting insecurities. Our old mind was set up to be on the lookout for insecurities and fear situations: it was our survival apparatus. Yet this apparatus has continued to be reinforced through social conditioning, resulting in limited perceptual capacity.

What is required now is a reinvigoration of vision: everything that we have culturally achieved has been the result of human vision. The human imagination is a primary force; it allows intervention of energies and guidance. We now need to upgrade our visionary capacity, to open up more fully to inspired thoughts and guidance. To fail to do so will be a great loss for our species as these are critical times for the instinctive perceptual faculties, and we need to bring these “organs” into being.
Kingsley L. Dennis

“Dennis has provided a great service by turning his considered and considerable attention to illuminating the way forward for humanity’s evolutionary journey.”

“Dennis penetrates the deep forces shaping our natural and social realities, noting that phenomena such as large cracks in Earth’s electromagnetic field; increasing solar radiation; DNA hypercommunication (data exchange on the DNA level using genetic code); and quantum coherence in biological organization portend an evolutionary “upgrade” already underway...With a steady focus on the positive potential for a new global society, Dennis maintains that participating in this transition relies on one foundational insight: the ultimate interconnection and interdependence of everything in a living field with a creative collective consciousness.”

“He certainly makes you question your own beliefs and makes you think of things you’ve never even entertained before. I recommend it!”

“Examining new findings in quantum physics and quantum biology on the interconnectivity of all life, as well as opportunities for us to reawaken our slumbering souls, this book offers a glimpse into the new global society to come, a renewed humanity for the 21st century, and how each of us can best participate during the process of planetary transformation.”

“This book is for anyone who wants to be in touch with the reality at hand and at the same time see the silver lining waiting for those of us who are prepared.”

“New Consciousness for a New World is a penetrating exploration of the potential for a new human civilization and consciousness to blossom during this time of profound global transition.”

– Duane Elgin, author of The Living Universe and Voluntary Simplicity