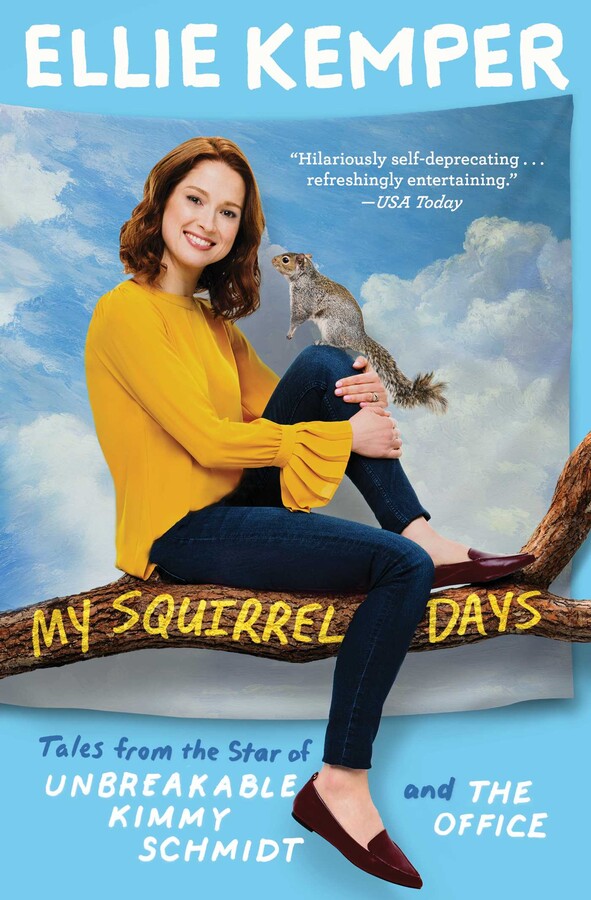 By Ellie Kemper
LIST PRICE $12.99
PRICE MAY VARY BY RETAILER

Comedian and star of The Office and Unbreakable Kimmy Schmidt Ellie Kemper delivers a hilarious, refreshing, and inspiring collection of essays “teeming with energy and full of laugh-out-loud moments” (Associated Press).

“A pleasure. Ellie Kemper is the kind of stable, intelligent, funny, healthy woman that usually only exists in yogurt commercials. But she’s real and she’s all ours!” —Tina Fey

“Ellie is a hilarious and talented writer, although we’ll never know how much of this book the squirrel wrote.”—Mindy Kaling

Meet Ellie, the best-intentioned redhead next door. You’ll laugh right alongside her as she shares tales of her childhood in St. Louis, whether directing and also starring in her family holiday pageant, washing her dad’s car with a Brillo pad, failing to become friends with a plump squirrel in her backyard, eating her feelings while watching PG-13 movies, or becoming a “sports monster” who ends up warming the bench of her Division 1 field hockey team in college.

You’ll learn how she found her comedic calling in the world of improv, became a wife, mother and New Yorker, and landed the role of a bridesmaid (while simultaneously being a bridesmaid) in Bridesmaids. You’ll get to know and love the comic, upbeat, perpetually polite actress playing Erin Hannon on The Office, and the exuberant, pink-pants-wearing star of Unbreakable Kimmy Schmidt.

If you’ve ever been curious about what happens behind the scenes of your favorite shows, what it really takes to be a soul cycle “warrior,” how to recover if you accidentally fall on Doris Kearns Goodwin or tell Tina Fey on meeting her for the first time that she has “great hair—really strong and thick,” this is your chance to find out. But it’s also a laugh-out-loud primer on how to keep a positive outlook in a world gone mad and how not to give up on your dreams. Ellie “dives fully into each role—as actor, comedian, writer, and also wife and new mom—with an electric dedication, by which one learns to reframe the picture, and if not exactly become a glass-half-full sort of person, at least become able to appreciate them” (Vogue.com). 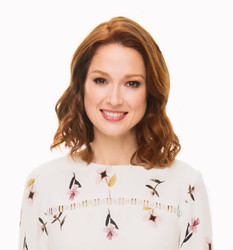 Ellie Kemper is the Emmy-nominated star of the Netflix original series, Unbreakable Kimmy Schmidt. She portrayed Erin Hannon on NBC’s The Office; costarred in Bridesmaids; and has also appeared in 21 Jump Street, Identity Thief, and Somewhere. Ellie voiced Katie in The Secret Life of Pets and is the voice of Crackle on Disney’s Sofia the First. Her writing has appeared in GQ, Esquire, The New York Times, McSweeney’s, and The Onion. Ellie currently lives in Manhattan with her husband and son, but is constantly trying to find a way to get back to St. Louis. My Squirrel Days is her first book.

Ellie’s a positive, relatable working woman reporting from the front lines of celebrity and from behind the scenes of your favorite shows. She’s also a New York wife and mother who’s just trying to have brunch and a born writer. It’s the kind of book you should only read in public if you don’t mind laughing out loud. —Valerie S., Executive Editor on My Squirrel Days

"A pleasure. Ellie Kemper is the kind of stable, intelligent, funny, healthy woman that usually only exists in yogurt commercials. But she's real and she's all ours!"
—Tina Fey

"Ellie is a hilarious and talented writer, although we'll never know how much of this book the squirrel wrote."
—Mindy Kaling

"This is a thoroughly charming book."
—Dave Eggers

"If you're at all a Kemper fan already (I am, a lot), you will freaking love this audiobook ... Listeners will be smitten with her grace and work ethic, and even her tendency to lose herself in the mean reds when hungry. Though I've never met her, after listening to My Squirrel Days, I feel confident in saying that Ellie Kemper is my best friend! O.K., maybe that's a bit extreme, and creepy, but she's definitely someone I would love to sit next to on a transcontinental flight."
—New York Times Book Review

"Applying her low-key genius...[Ellie Kemper] cements her status as an Elaine May for the digital age."
—Vogue

Kemper reveals herself as a sharply intelligent social observer...[who’s] happy to burst the self-important bubble of celebrity, including her own.”
—People

"Just when we thought we couldn’t love her more, Kemper released her first memoir, My Squirrel Days, a hilarious chronicle of the redhead’s journey from childhood to Hollywood. Kemper brings readers into her early days as a wannabe squirrel whisperer, her career as a field-hockey-dropout-turned-improviser at Princeton, her uncanny experience serving as an actual bridesmaid while filming Bridesmaids and much more."
—Parade.com

"Recalling stories from different points in her life, from her childhood to moving to Los Angeles, her charm and warmth are on full display. Be prepared to fall even more in love with Kemper."
—PopSugar

"[Kemper] shares a series of charming personal essays that chronicle both her professional and personal life, from being a child to having one. Rather than write a tell-all, Kemper gently lifts the veil on specific elements of her life, revealing “tidbits from [her] past” and “morsels of the present.”"
—Boston Globe

"Ellie Kemper's debut [memoir], My Squirrel Days, is exactly what you would expect from the comedian. It's rich in personality, teeming with energy and full of laugh-out-loud moments. Kemper is a natural storyteller."
—Associated Press

"Kemper reveals herself to be ... the veritable kindred spirit of her alter egos ... charming.
—Washington Post

"[Kemper] is famously nice, polite and upbeat ... The book is a collection of more than two dozen short essays, assembled more or less chronologically, about certain incidents in her life. Taken collectively, they reveal her personality, history and character without becoming bogged down in specifics."
—St. Louis Dispatch

"In her book, Kemper dives fully into each role—as actor, comedian, writer, and also wife and new mom—with an electric dedication by which one learns to reframe the picture, and if not exactly become a glass-half-full sort of person, at least become able to appreciate them."
—Vogue.com

"Kemper, 38, is hilariously self-deprecating while maintaining a refreshingly entertaining and positive outlook throughout the book. It's a breezy read that has actual laugh-out-loud moments thanks in part to her nonchalantly sarcastic commentary."
—USA Today

"One book we’re not passing on: Kemper’s new collection of essays, My Squirrel Days. In it, the St. Louis native recounts her life growing up here—i.e., communing with an overweight squirrel outside her tree house, hence the title—as well as how she came to play Erin Hannon on NBC’s hit The Office and then Kimmy."
—St. Louis Magazine

"Kemper is a joy to follow ... She’s always poking fun at herself, but bravely open enough to let us all in on the joke."
—TheAVClub.com

"The Office and Unbreakable Kimmy Schmidt star delivers a series of essays on topics ranging from growing up in St. Louis obsessed with squirrels to becoming a mother and learning how to discreetly change diapers."
—TIME.com

"In My Squirrel Days, Kemper her journey from her Midwestern childhood in suburban St. Louis to her breakout years in the comedy scene in Hollywood. Like so many other celebrity memoirists, Kemper weaves pop-culture references with her own personal stories and behind-the-scenes tales from life on the small screen. But Kemper's book is different from other celeb memoirs in one critical respect: She dedicated an entire essay to examining her complicated childhood friendship with a wild squirrel she named Natalie. Yeah, this is definitely different from anything you've read before."
—Bustle

"If you’ve ever wanted to sit down and have a conversation with Ellie Kemper, reading her hilarious collection of essays about her life and career is basically the same thing ... Ellie’s stories will make you pee your pants with laughter, which may or may not be something she has some experience with herself."
—Hello Giggles

"Actress Kemper's memoir in essays gives fans a taste of what it was like growing up Ellie ... Kemper solidifies her upbeat and humble persona with her first book."
—Booklist

"Engaging and refreshing ... She is an entertaining writer, and her tales ... will give readers an enticing glimpse of her happy-go-lucky attitude. This is a fun, breezy, and enjoyable volume."
—Publishers Weekly

By Ellie Kemper
LIST PRICE $12.99
PRICE MAY VARY BY RETAILER