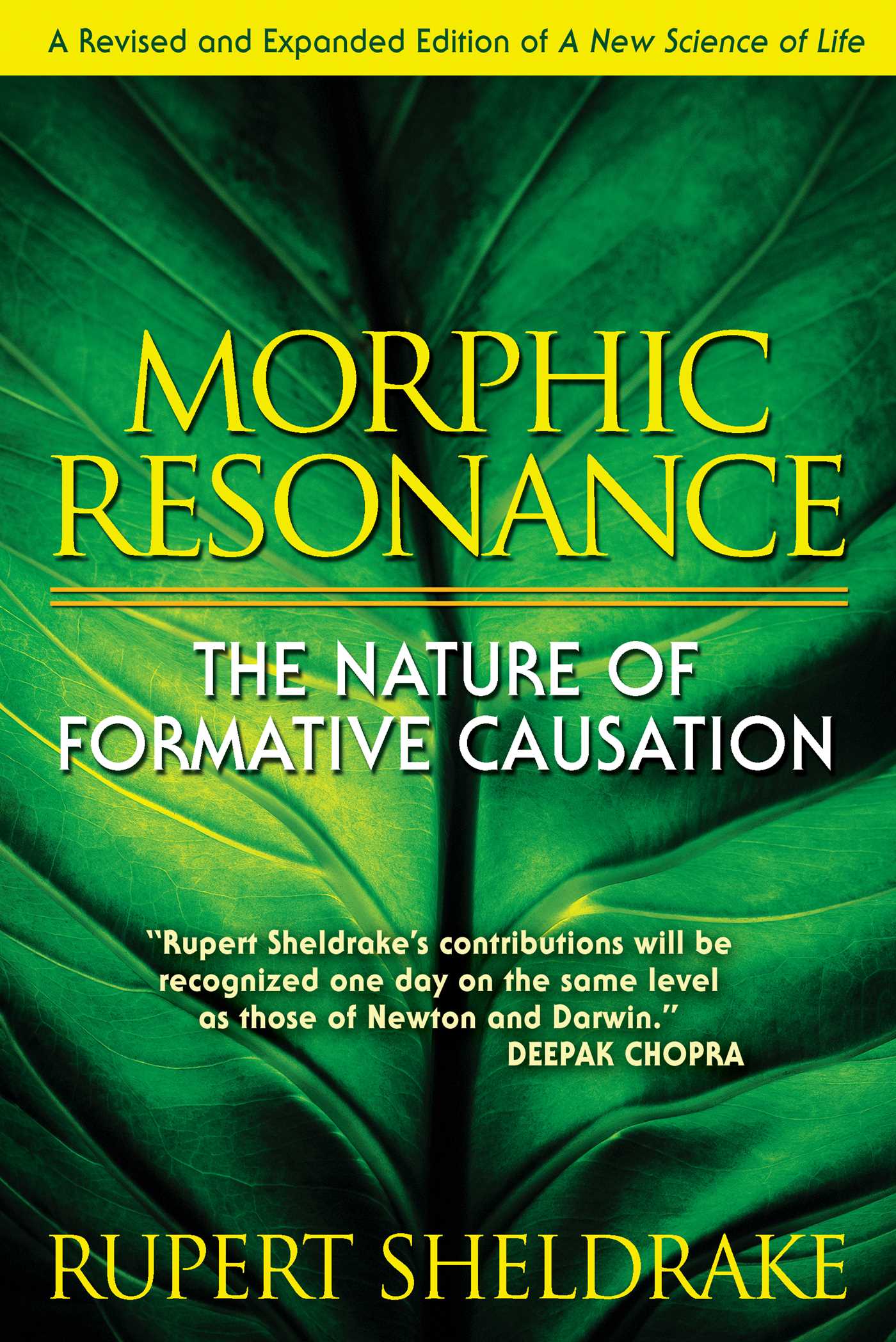 The Nature of Formative Causation

When A New Science of Life was first published the British journal Nature called it “the best candidate for burning there has been for many years.” The book called into question the prevailing mechanistic theory of life when its author, Rupert Sheldrake, a former research fellow of the Royal Society, proposed that morphogenetic fields are responsible for the characteristic form and organization of systems in biology, chemistry, and physics--and that they have measurable physical effects. Using his theory of morphic resonance, Sheldrake was able to reinterpret the regularities of nature as being more like habits than immutable laws, offering a new understanding of life and consciousness.

In the years since its first publication, Sheldrake has continued his research to demonstrate that the past forms and behavior of organisms influence present organisms through direct immaterial connections across time and space. This can explain why new chemicals become easier to crystallize all over the world the more often their crystals have already formed, and why when laboratory rats have learned how to navigate a maze in one place, rats elsewhere appear to learn it more easily. With more than two decades of new research and data, Rupert Sheldrake makes an even stronger case for the validity of the theory of formative causation that can radically transform how we see our world and our future.

THE UNSOLVED PROBLEMS OF BIOLOGY

In psychology, the science of the mind, there are different schools of thought about the relationship between mind and body. The most extreme materialist solution is to deny the reality of the mind and to assume that only the body is real. This was the approach of the behaviorist school, which dominated academic psychology for much of the twentieth century. Behaviorists confined their attention to objectively observable behavior and ignored the existence of consciousness. But behaviorism was not a testable scientific hypothesis; it was a methodology. It is now out of fashion within academic psychology and has largely been replaced by cognitive psychology.
Like behaviorism, cognitive psychology rejects introspection, but it admits the existence of internal mental states, such as belief, desires, and motivations. Its dominant metaphor is the computer. Mental activity is thought of as “information processing.” The mind is the software running the hardware of the brain. But the limitations of the computer metaphor are becoming increasingly apparent, not least through a new recognition of the role of the emotions and an acknowledgment that minds are embodied and actively related to the environment.
In the 1990s the philosopher David Chalmers made a distinction between what he called the “easy problems” of consciousness, like finding neural correlates of sensation--for example, which parts of the brain become active during the visual perception of moving objects--and the “hard problem” of “Why does awareness of sensory information exist at all?” There is a radical distinction between the biology of the brain and mental experience, which includes the experience of qualities, such as red. (Philosophers of mind call these subjective experiences “qualia.”) Chalmers argues that to take consciousness seriously, it is necessary to go beyond a strict materialist framework.
Unlike the materialist psychologies that predominate within academic institutions, other schools of psychology accept subjective experience as their starting point and also recognize that not all mental activity is conscious: many aspects of behavior and subjective experience depend on the subconscious or unconscious mind. The unconscious mind may also have properties that defy mechanistic explanation. For example, in Carl Jung’s development of this concept the unconscious is not confined to individual minds but provides a common substratum shared by all human minds, the collective unconscious.

In addition to our immediate consciousness, which is of a thoroughly personal nature and which we believe to be the only empirical psyche (even if we tack on the personal unconscious as an appendix) there exists a second psychic system of a collective, universal, and impersonal nature which is identical in all individuals. This collective unconscious does not develop individually but is inherited. It consists of pre-existent forms, the archetypes, which can only become conscious secondarily and which give definite form to certain psychic contents.

Jung tried to explain the inheritance of the collective unconscious physically by suggesting that the archetypal forms were “present in the germplasm.” But it is doubtful that anything with the properties of the archetypal forms could be inherited chemically in the structure of DNA, or in any other physical or chemical structure in sperm or egg cells. Indeed the idea of the collective unconscious makes little sense in terms of current mechanistic biology, whatever its merits as a psychological theory might be.
However, there is no a priori reason why psychological theories should be confined within the framework of the mechanistic theory. Mental phenomena need not necessarily depend on the known laws of physics but may depend on principles as yet unrecognized by science.

In all traditional societies stories are told of men and women with seemingly miraculous powers, and such powers are acknowledged by all religions. In many parts of the world, various psychic abilities are cultivated within systems such as shamanism, sorcery, tantric yoga, and spiritualism. And even within modern Western society, there are persistent reports of unexplained phenomena, such as telepathy, clairvoyance, precognition, memories of past lives, hauntings, poltergeists, psychokinesis, and so on. Surveys show that the most common kind of telepathy occurs in connection with technology, namely telephone telepathy, whereby people think for no apparent reason of someone who calls soon afterward.
Although dogmatic skeptics dismiss all this evidence out of hand, the possibility that at least some of these events actually occur is an open question. It can only be answered after an examination of the evidence.
The scientific study of allegedly psychic phenomena has now been going on for more than a century. Investigators in this field of psychic research have discovered some cases of fraud and found that some apparently paranormal events can in fact be explained by normal causes. But there remains a large body of evidence that seems to defy explanation in terms of any known physical principles. Numerous experiments designed to test for so-called extrasensory perception have yielded positive results with odds against chance coincidence of thousands, millions, or even billions to one.
Since these phenomena cannot be explained in terms of the known laws of physics and chemistry, from the mechanistic point of view they ought not to occur. But if they do, then there are two possible approaches. The first is to suppose that they depend on nonphysical causal factors or connecting principles. The second is to start from the assumption that they depend on laws of physics as yet unknown, or on extensions of quantum theory, for example by postulating that mental states play a role in determining the outcomes of probabilistic processes of physical change.
Rupert Sheldrake

“Sheldrake is an excellent scientist; the proper, imaginative kind that in an earlier age discovered continents and mirrored the world in sonnets.”

“Well written, provocative and entertaining . . . Improbable? Yes, but so was Galileo.”

“Books of this importance and elegance come along rarely. Those who read this new edition of A New Science of Life may do so with the satisfaction of seeing science history in the making.”

“For decades, Rupert Sheldrake has been at the leading edge of highly innovative and controversial ideas about the organization of biological systems. Morphic Resonance poses a serious challenge to traditionalists and is a most welcome book about how we see the world and how we should head off into the future.”

“Morphic Resonance is destined to become one of the landmarks in the history of biology. It is rare to find so profound a book so lucidly written.”

“Morphic Resonance presents a revolutionary information-field understanding of the nature and evolution of life. Acquaintance with it is an essential part of new-paradigm scientific literacy.”

– Ervin Laszlo, author of Science and the Akashic Field

“Rupert Sheldrake is one of the most innovative and visionary scientists of our times. Rupert will be both vilified and praised for his theory of morphic resonance. Whatever your personal opinion of his work, he will not be ignored. In my opinion, his contributions will be recognized one day on the same level as those of Newton and Darwin.”

– Deepak Chopra, author of Reinventing the Body, Resurrecting the Soul

"Though his theory has much to say about the nature of evolution and the biological sciences, it also has a lot to say about consciousness, dreams, mental imagery and what I might consider ordinary and extraordinary dream/hypnotic experiences."

" . . . will appeal to any interested in new science, biology, and blends of new age thought."

" . . . Sheldrake has steadily developed into one of the world's leading parapsychologists, conducting groundbreaking research in areas where well-behaved scientists fear to tread."

"Sheldrake's theories continue to gain verification, and this book is particularly important because its implications affect the way we view the natural world, as well as ourselves, as one small part of it. Morphic Resonance is therefore strongly recommended to anyone interested in understanding current thought about what may lie behind the formation of all natural systems."

The Nature of Formative Causation