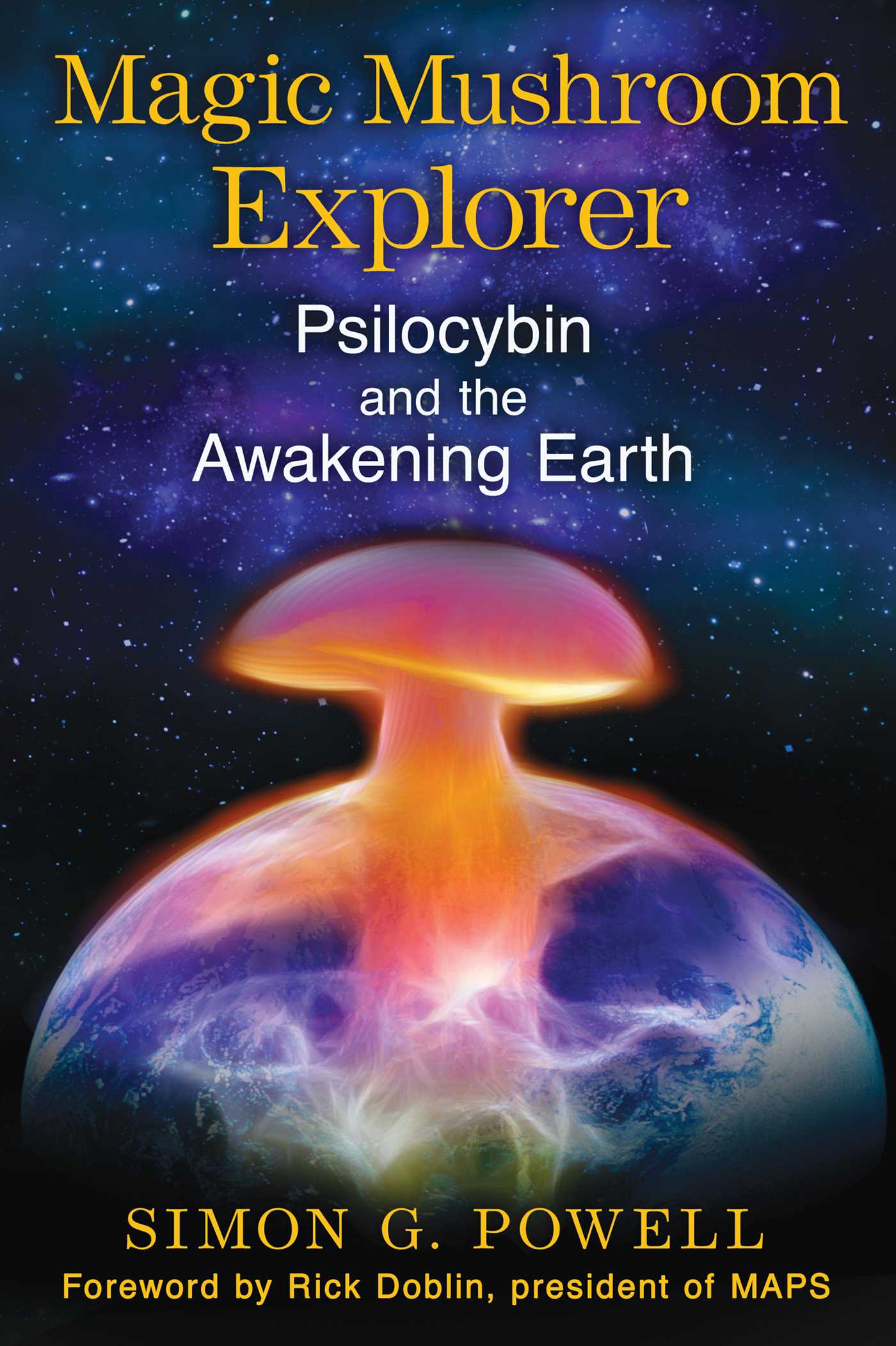 • Explores the ecopsychological effects of wild psychedelic mushrooms, including enhanced biophilia, expanded awareness, eco-shamanic encounters, and access to the ancient wisdom that binds all life on Earth

• Examines the most recent scientific studies on psilocybin in the U.S. and U.K.

• Details the author’s work to keep the use of psilocybin mushrooms legal in the U.K. and shows that an irrational rejection of scientific evidence underlies the harsh war against psychedelic states of consciousness

Psilocybin, the active ingredient found in psychedelic mushrooms, is an invaluable natural resource for spiritually revivifying the human psyche and reconnecting us to the biosphere and the vast intelligence of Nature. Interweaving the most recent scientific studies in the United States and Britain, more than 25 years of sacred mushroom exploration, and behind-the-scenes details on the political wars against psychedelics, Simon G. Powell offers a guide to safely navigating and maximizing the healing and spiritual potential of psilocybin.

Powell explores the ecopsychological effects of wild psychedelic mushrooms, including enhanced biophilia, expanded awareness, mystical visions, and eco-shamanic encounters. He reveals how the beings and otherworldly teachers common in psilocybin experiences are actually emissaries from our higher consciousness that emerge when the floodgates of perception have been opened. He shares vivid descriptions from many of his own psilocybin journeys and shows how the mushroom offers a path of return to the ancient wisdom binding all life on Earth, a wisdom conveyed through tutorial visions and higher modes of perception. Illustrating psilocybin’s healthful properties, now acknowledged by mainstream science, Powell describes his activism in the fight to keep psilocybin mushroom use legal in the U.K. and shows that an irrational rejection of scientific evidence underlies the harsh war against psychedelic states of consciousness.

Laying the groundwork for a new relationship with our biosphere, Powell shows how the Earth’s psychedelic medicines can reconnect us to the spirituality and wisdom of Nature and bring the human race back from the brink of ecological and existential disaster.

We hype up our own intelligence but deny intelligence, even unconscious intelligence, to the larger system of nature that engineered us. We may even rave over artificial intelligence (AI), yet we do not get excited about the natural intelligence that the AI community often attempts to mimic. Indeed, very few scientists are prepared to state that nature has intelligent characteristics. You could argue that scientists don’t want to risk getting mixed up with intelligent design or creationism or that they are still recoiling from centuries of unquestioned religious dogma and therefore are loathe to embrace metaphysically potent ideas, but I suspect something deeper is at work.

Over the years I have come to the conclusion that the persistent refusal to acknowledge natural intelligence is actually due to a conceptual blind spot. Not a metaphorical blind spot but a real one. Just as there is a blind spot in the visual system--the part of the retina where all the “wiring” goes through--there is also a blind spot in our conceptions of nature. Whereas we will get very excited over the concept of an advanced alien intelligence, we cannot sense that same kind of advanced intelligence in the laws and forces of nature that served to evoke life.

When you consume psilocybin, however, the miracle of life really hits home, and you can perceive natural intelligence directly. The blind spot is thus removed. Something as simple as a leaf can be seen for what it really is--a sophisticated and breathtakingly wonderful example of organic technology. In an essay I wrote for the website Reality Sandwich, I describe this amazing technology as I observed it in an ivy leaf while in an enhanced state brought on by psilocybin:

“Each individual ivy leaf, whether small or fully grown, was perfectly formed. No more than a few millimeters thick and a few centimeters long, each veined leaf looked polished. . . . And they looked printed. Well, not just printed, but perfectly printed, as if they had been printed out at maximum resolution on the finest quality glossy inkjet paper. Indeed, we began to imagine how hard it would be to print out such a leaf using conventional printer technology. Sure, you could purchase high quality glossy paper and use high quality color ink. And you could even print on both sides of the paper. But all you would get would be a flat 2-dimensional simulacrum of a leaf. It might be glossy and radiant, but it would lack the 3-dimensional biological complexity of a real ivy leaf. . . . Living things have a highly organized molecular complexity about them impossible to simulate artificially. To produce leaves, the ivy organism had to construct them one cell at a time according to some master plan held within its DNA. And it was indeed a kind of printing, albeit achieved with precisely orchestrated protein as opposed to paper and ink. And more, they are endowed with the technological prowess to make hundreds, or even thousands, of identical leaf structures, each leaf packed with photosynthetic machinery.”

So why do we have a blind spot? Why do we see ourselves as smart but not grant smartness to the cortical bio-logic that underlies our smart minds? And why do we not grant smartness to the evolutionary process that engineered the human cortex in the first place? Maybe it is because we are practical creatures who, in order to survive in the world, need to view living things in a purely pragmatic way. After all, if we just sat round all day marveling at how amazing leaves were, nothing would get done! Indeed, psychedelic pioneer Aldous Huxley reckoned that the typical way humans look at the world is utilitarian in as much as we look at the world in terms of potential resources of one kind or another. Whereas psychedelic perception granted one access to a bigger and more real world. So it might well be that the human psyche has evolved certain restrictions, conceptual blind spots, that prevent us from being overly dazzled by living things. Yet this blind spot is circumvented by the mushroom. With it we may suddenly see life for what it is and thereby sense and feel the natural intelligence that courses through all things.

There is also the problem of the human ego. This can be so big as to negate anything that might threaten its self-proclaimed lofty stature. We idolize our technology, we build statues of people, we cheer for men in power, we wave flags to glorify our various groups. We are basically so self-absorbed as to be oblivious to other reference points. We live in a totally anthropomorphic world. Certain plants and certain insects are deemed pests, but never us--and this is despite the fact that we are the most ecologically destructive species on the planet.

Yet we readily talk about natural selection. This phrase is not even restricted to scientists. Darwin’s great idea and his chosen terminology has spread itself far and wide and has become popular parlance. Given that natural selection is now a wholly accepted part of our lexicon, I think it is perfectly feasible to talk about natural design, natural technology, and, of course, natural intelligence. What we need to take on board is that our intelligence is not wholly novel but is a relatively new expression of previous kinds of intelligence; we are natural intelligence in its latest ongoing expression. Through the medium of consciousness, we are nature perceiving itself. We are evolution become aware of itself. We are, in fact, the very cosmos in the act of knowing itself. That is precisely the kind of innervating realization galvanized by psilocybin. When the doors of perception are thrust open and cognitive blind spots diminish, we see that we are an intimate part of an astonishingly smart process, fulfilling some kind of important function. As a species, we just don’t know it yet.
Simon G. Powell

“Here is the thought-provoking description of the author’s spiritual quest, his profound discoveries, and their implications for renewed research with psychedelic substances, reawakening us to the sacredness of nature and life itself. In and through the pitfalls and pinnacles of his journey is the transformation of a curious and courageous young man into a mature modern prophet and social critic. Fascinating read!”

Simon’s book discusses all these highly charged ideas in a charming, easily understood, humorous, and utterly engaging manner that will resonate with experienced psilocybin explorers and that may just open the eyes of those who are not (yet) experienced to the possibility that nature is richly blessed with unimagined realms of intelligence, mystery, and complexity. With this book, his third, Simon has knocked it right out of the park (or perhaps right into the park, since parks seem to be the frequent home of his little fungal friends).”

“Simon G. Powell, a credible psychonaut, has written a book that should be welcomed as our overpopulated species attempts to transition to sane drug policies and respect for native wisdom, integration with nature, and, ultimately, planetary maturity and ecological stability.”

“The author informs, muses, and amuses as he chronicles his psilocybin explorations and insights into natural intelligence. He writes in joyfully plain English, tells compelling stories, and gets excited by all of life. Definitely outside the box.”

“Simon G. Powell’s most profound insight is that nature is intelligent, not in the way that we think of intelligence as confined to the human mind, but that intelligence is an intrinsic property of the whole of nature. He calls for a new science of ‘psilocybinetics’ that views life anew under the ‘perceptual lens’ afforded by the mushroom. It is an interesting and provocative read!”